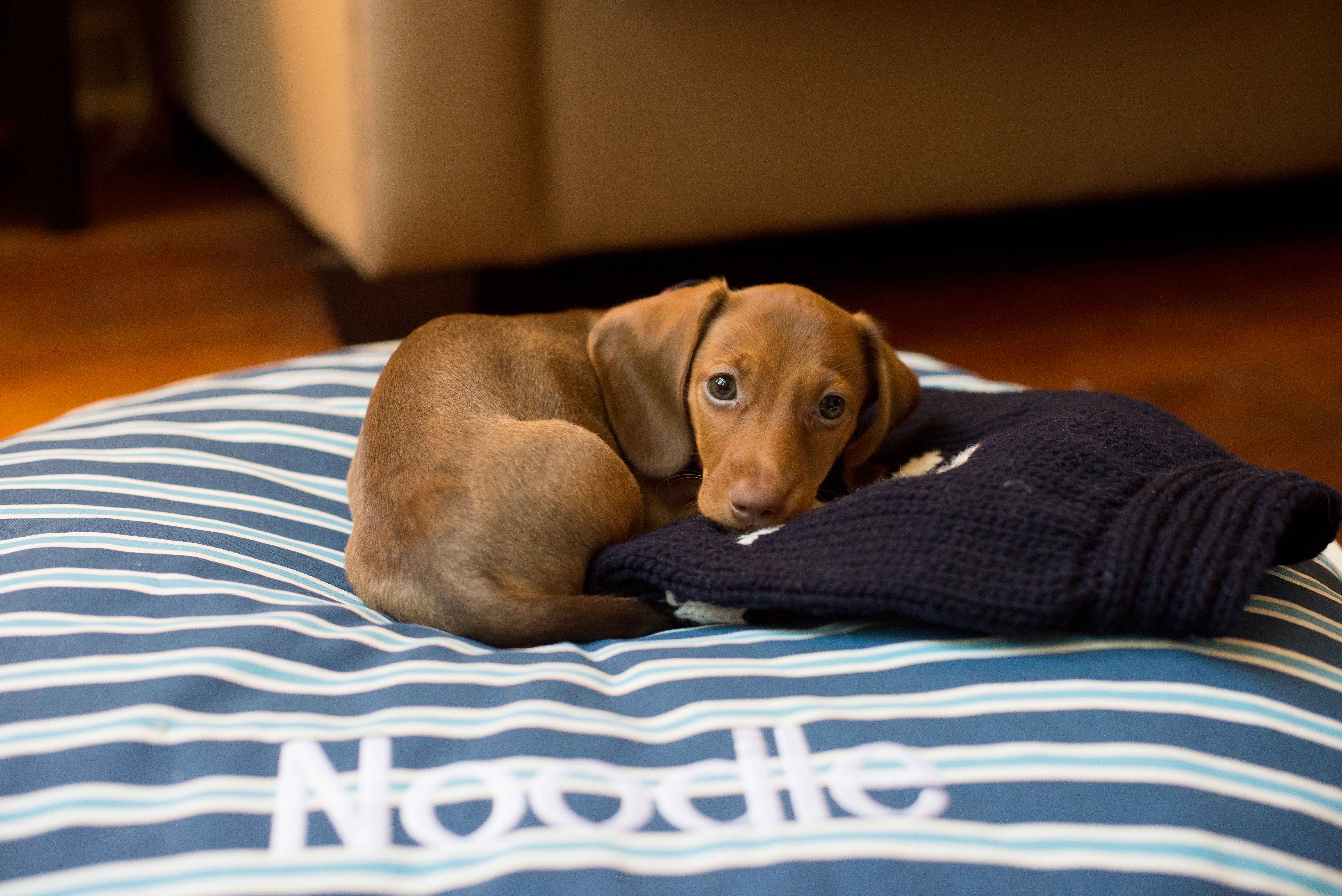 Bed and Monogrammed Cover / Monogrammed Anchor Sweater (Much too big for her, but perhaps she’ll grow into it?) / Collar (Again–too big. Can’t find anything small enough!)

The last few days have been an absolute whirlwind. It’s hard to believe that so much has happened–and changed–in such a short period of time! Two days ago, Mitch and I were on our own, living fairly calm and organized lives. Things were simple, and we were free to do whatever we wanted whenever we wanted. Go out to dinner at 10 p.m.? Sure. Hop on a flight to Florida? We could. Have a dance party at 2 a.m.? Duh. Sleep in until 10 a.m. on a Saturday? Yes. (You get the point.)

Now, we have this tiny, adorable pup–perfect in every way–that is completely dependent upon us, and for the first time, we have to consider someone else before ourselves. I kind of panicked when the weight of this thought first sank in. I’m responsible for another life? What? What have I done?! But let me tell you: I am completely in love, and being responsible for someone else–I say “someone” like Noodle is a human, haha–is one of the most amazing feelings I’ve ever had. I adore her. And while it’s only been a couple of days, I now can’t imagine life without her. Good god… I can only imagine how it must feel to become an actual mother! (And yes, Mitch and I want kids. But one change at a time. ;)) 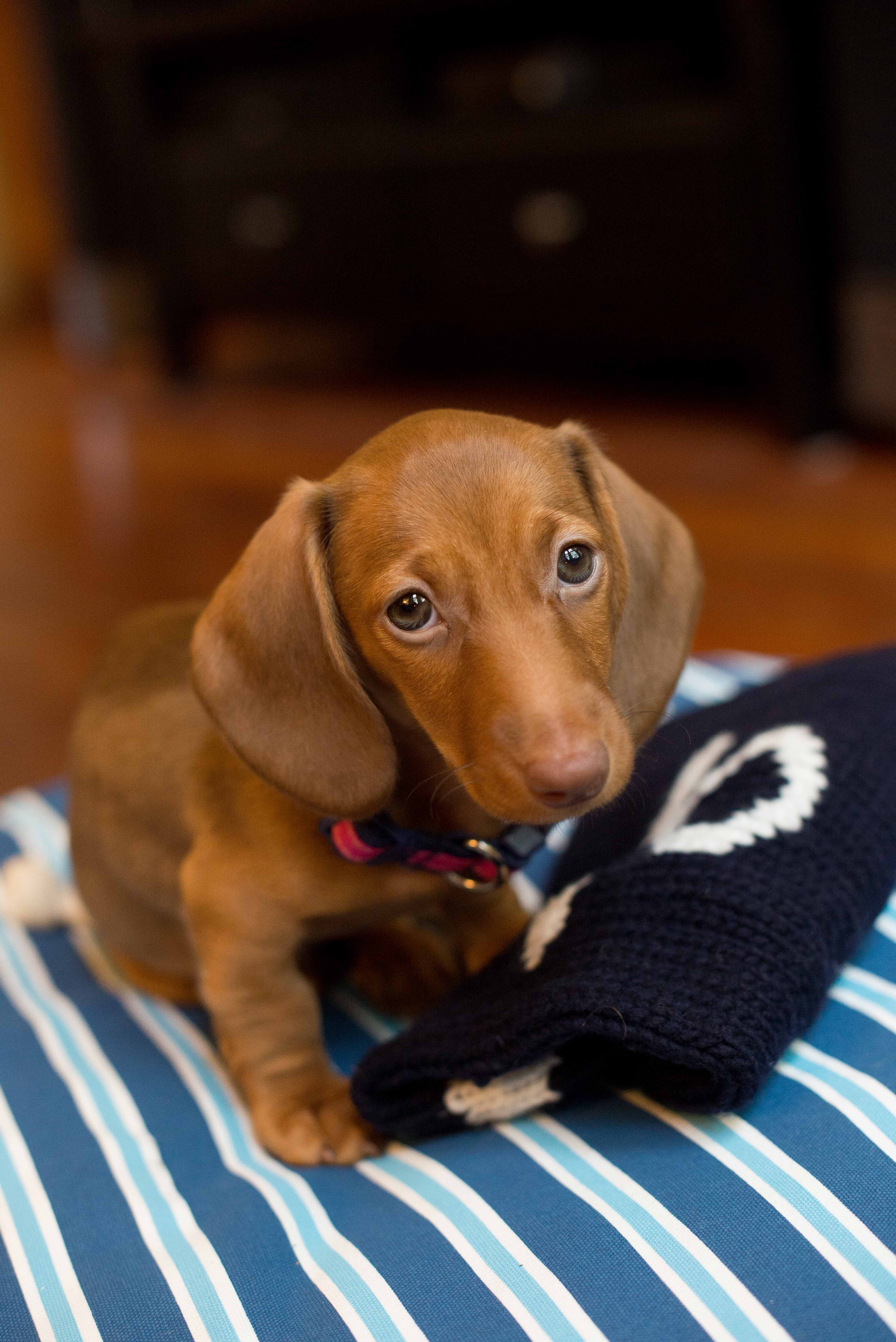 So far, things have been going really well on the Larkin home front. I mean, don’t get me wrong: I am TIRED AS HELL. But aside from nighttime, Noodle’s been acclimating far better than I ever thought she would at nine weeks! Before her arrival, Mitch and I spent about a month watching YouTube videos, reading articles online, and talking with dog owners about effective puppy training techniques. Of course, we’ve made quite a few mistakes and are still learning, but I’m so glad we did the research. While puppies are absolutely adorable and pretty much the best thing on earth, I’ve quickly learned that they’re also a handful, and require a lot of care, supervision, attention and tough love. (And that I’m a softy.) 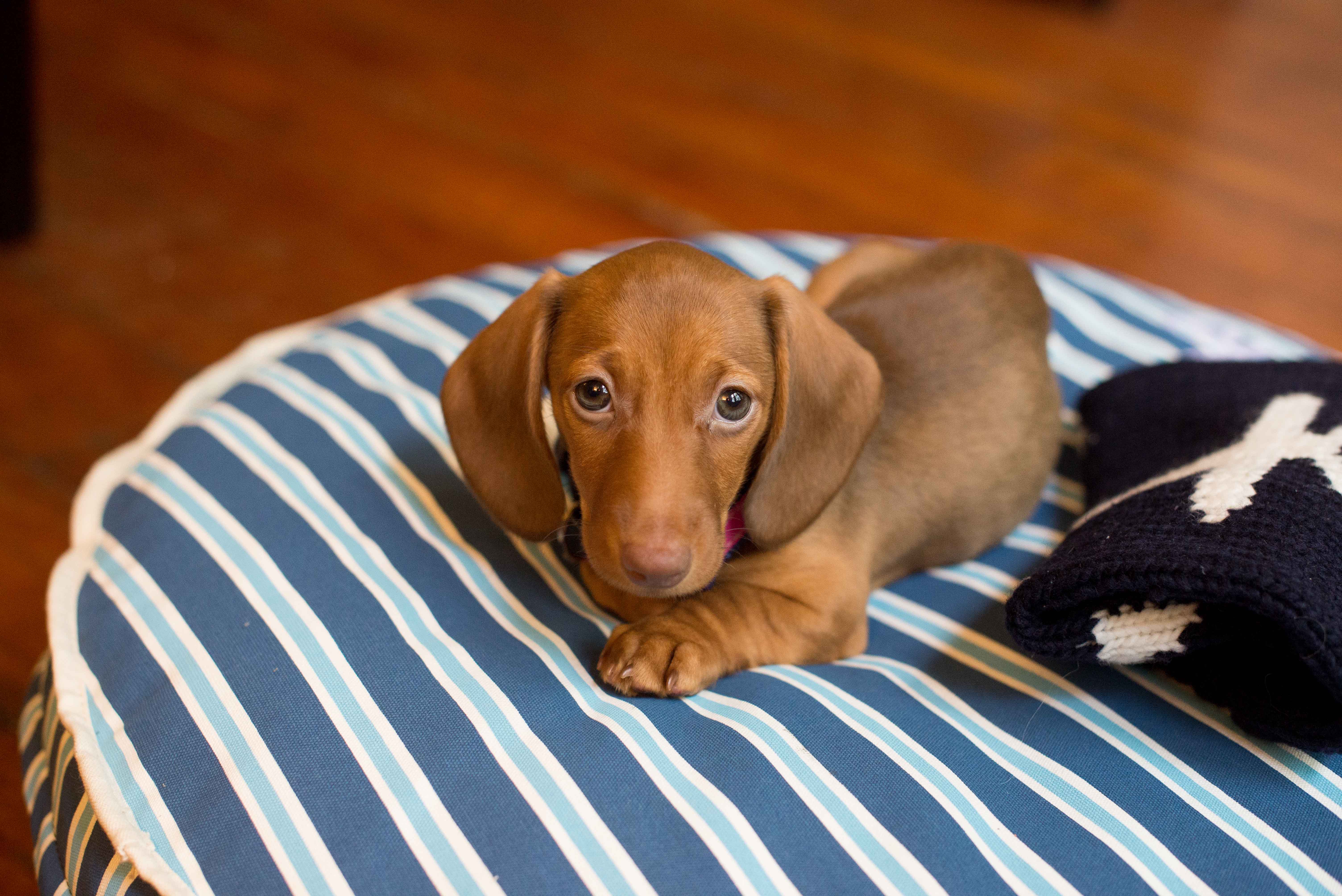 Let’s start with the positive:

*Noodle has learned to trust us. At first, she was pretty hesitant, and would shake when we picked her up. But now her little tail wags a mile per minute when we play with her, pick her up, or say her name. Cutest. Thing. Ever.

*Like I said, we absolutely adore her. As silly as this sounds, I was a little nervous that we wouldn’t click. But we totally do! I love everything about her, from her wrinkly paws and floppy ears to her spunky personality and playfulness. She is perfect, and I can’t believe she’s ours.

*She’s getting the hang of potty training. On the first day, she had a couple of accidents. But today?! Not one! (Such a good girl.) Mitch and I take her out every 30 minutes and reward her with treats when she tinkles or poos. We’ll see if this good behavior continues, but we’re proud of her nonetheless. 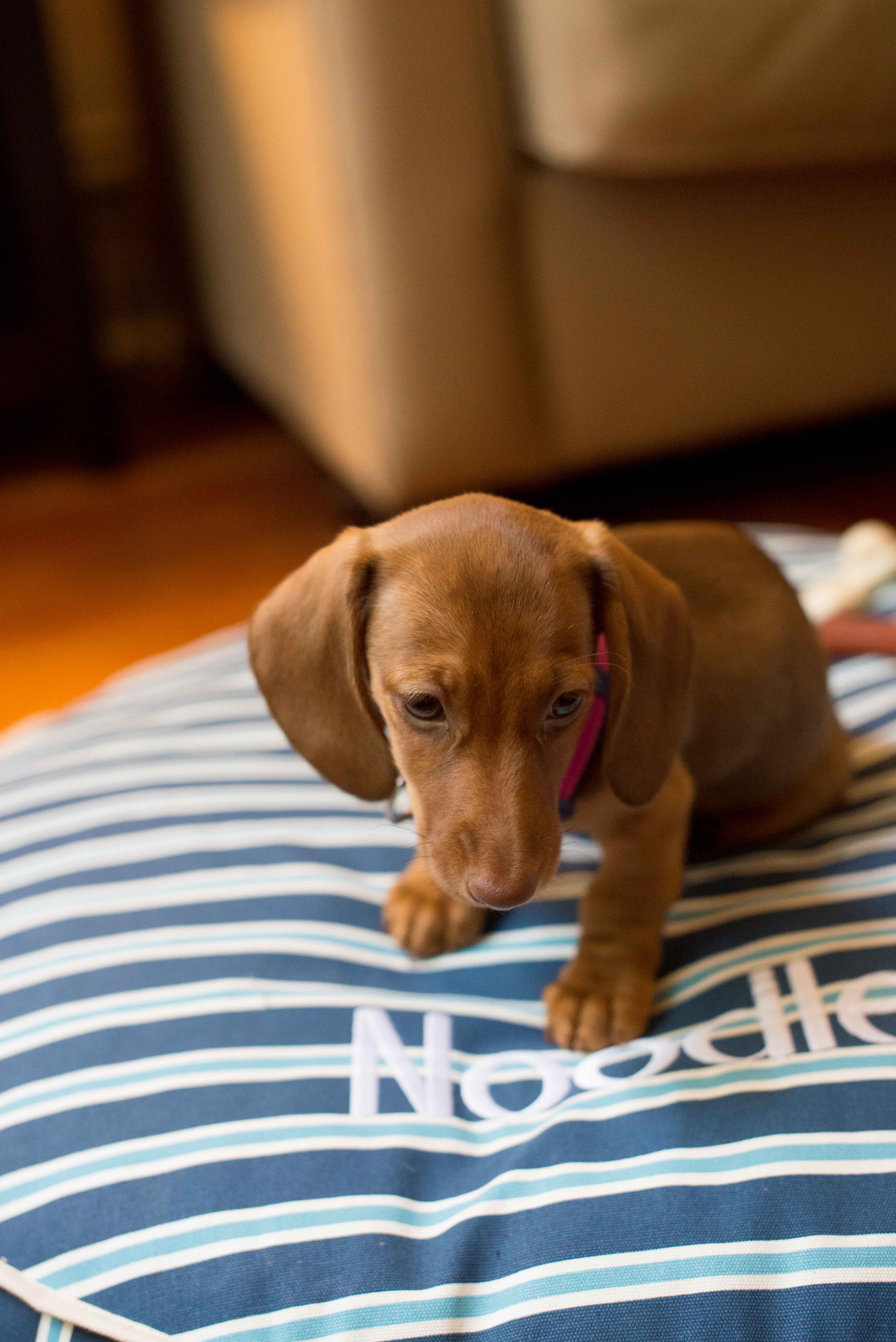 *She’s learned new skills. Noodle can now walk four whole blocks on a leash, interact with new people and dogs without shaking in fear, and “come” when called. (If she isn’t too tired.)

*There’s less clinginess. On the first day, she cried her little heart out if I wasn’t in the same room with her. (Goodness. Showering? I sat her on the bathroom floor and talked to her the whole time, but you would have thought she was being murdered!) As much as it pained me, we decided not to pick her up every time she whimpered or cried, and it worked. She still cries or whimpers for us now and again, but today, she herself actually left us to go play with her toys and eat her puppy chow on multiple occasions. Woo, Noodle!

*She has a serious cuddling talent. It’s her favorite thing to do–a quality in a dog that I find 100-percent necessary. ;) My heart melts every time she climbs into my lap or nuzzles up to me. Sigh.

*She likes her stuff. After I removed about a third of the stuffing, Noodle now gets on her dog bed all by herself. She LOVES it. It’s adorable. (I got her the size small, if you’re wondering.) Wearing her sweater, which is far too large for her, also seems to really calm her down when she’s upset! I do, however, need to invest in some new toys. Most of them are just too big for her right now!

*She’s so much fun. She truly makes life better. I love that we take so many “family walks,” and that nearly everyone on the street wants to stop, talk and pet. It’s the best. While Noodle is acclimating to us, we’re acclimating to Chicago–and she’s certainly helping! She’s also great company. She sits under my desk when I’m working, scampers around the kitchen while we’re cooking, and cuddles next to us on the couch when we’re watching movies. 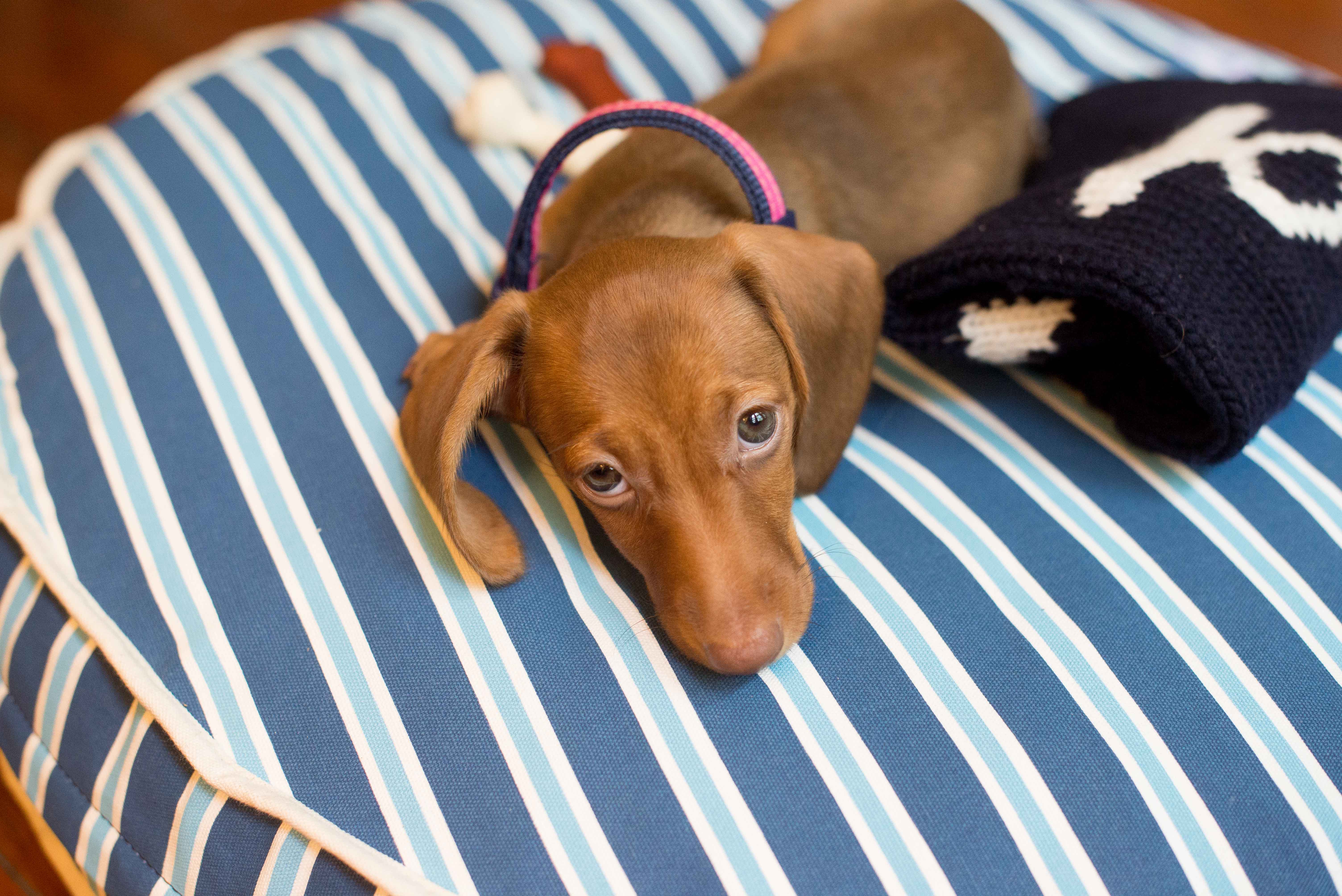 *Nighttime. Oh my God, guys. It’s killing us. We’re in the process of crate training her, and it’s SO HARD. I know it’s normal for a puppy to whimper, cry and bark when crated, but my heart hurts to hear her so upset. On the first night, it was so upsetting to me that I slept with her on the couch. BIG MISTAKE. Last night–despite putting a small fleece bed, stuffed animal, treats and a t-shirt that smelled like me in there with her–she howled from midnight until 6 in the morning. We took her out twice to go potty, but I swear it did more harm than good. No one slept, and I was brought to tears. (I know. I need to grow a backbone.)

Today was rough. (Ruff? Haha.) We didn’t want her to sleep all day in the fear that she’d be wide awake for bedtime, so we persevered with coffee, lots of fresh air, and at least six walks. The poor little girl. All she wanted to do was close her eyes and nap the day away on her dog bed. We also spent a lot of time showing her that her crate is her home. We fed her in there, put new treats and toys in there, and rewarded her every time she went in. We also repeatedly called it “home,” and always said the word in an upbeat manner.

Tonight, around 11 p.m., we put her in her crate, covered three sides of it with a blanket, and talked to her for a couple of minutes. We faced the crate in the direction of our bedroom so that she could see us, and said goodnight. After about an hour and a half of howling, I got up to use the bathroom, and turned on the faucet. AND WHAT DO YOU KNOW?! She quieted down. It’s been an hour, and she’s only had one five-minute tantrum. Now, running the faucet like this is certainly wasteful, and I’ll obviously swap it out for the white noise app I have on my iPhone when I wake her up to go potty in a few hours, but hey–desperate times call for desperate measures, you know?! :(

If you have any helpful puppy training tips or suggestions, Mitch and I would LOVE to hear them! We’re first-timers here, and we’re open to anything and everything! Thanks in advance!

(By the way: I really, really encourage adopting a foster animal. I ended up falling head-over-heels in love with Noodle and just couldn’t live without her, but I still plan on adopting a foster dachshund one day!)

And don’t forget to enter the $50 Visa eGift Card giveaway from Frugaa.com! 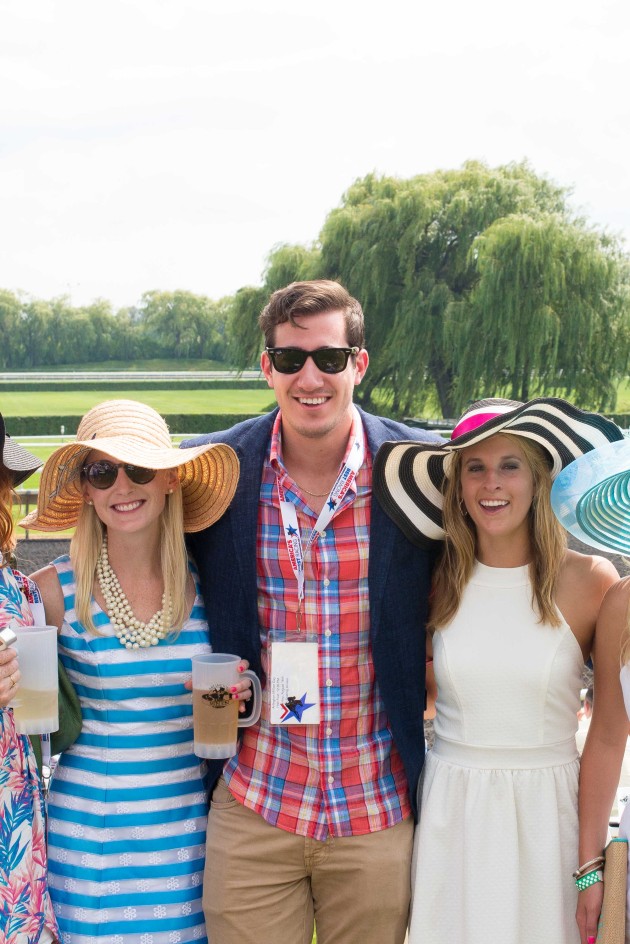