How To Crate Train A Dachshund 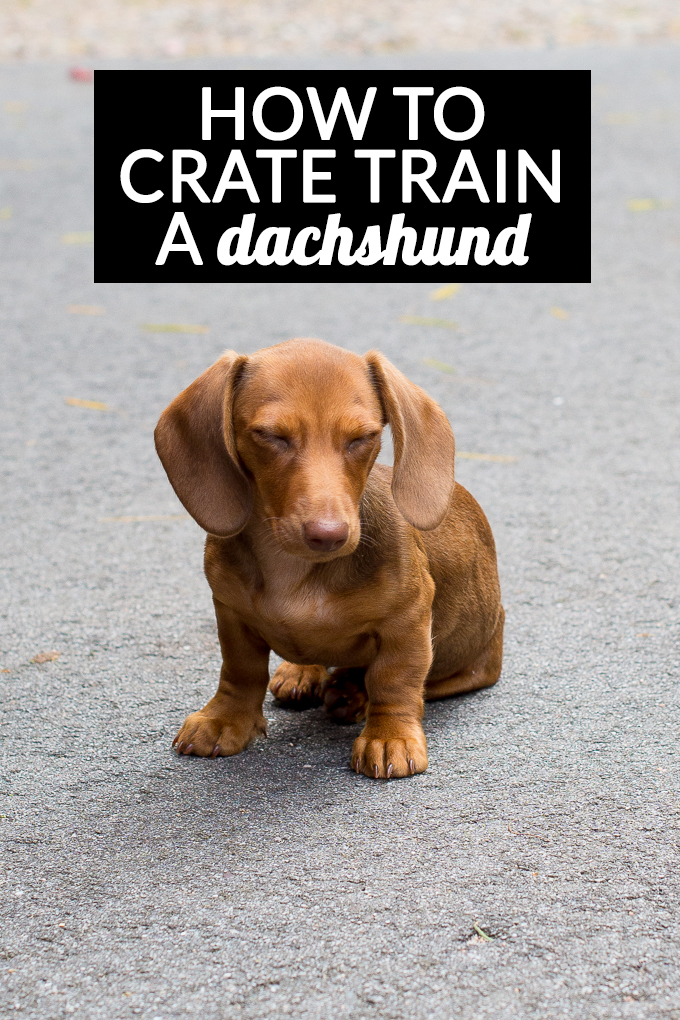 I know that most of you don’t have dachshunds, but I’m astounded by how many e-mails I get about crate training them. Because it’s hard. Crate training any dog is hard–and I certainly remember my black Lab puppies crying their little eyes out in their new crates when I was growing up. But dachshunds are relentless in their barking, crying and howling… and two or three months of sleeplessness is bound to drive any new dog owner into utter sadness or flat-out insanity.

When Mitch and I first got Noodle, things were disastrous on the sleeping front. We’d been told that crate training a dachshund was imperative to both the dog’s happiness as well as ours, since the breed tends to be stubborn, difficult to housebreak, and anxious when separated from their peeps. And so Noodle went in the crate, and we went crazy. She barked, and cried, and howled.

And it seemed like the situation would never improve. But if you’re the new owner of a dachshund–or any dog, really–and feeling hopeless, don’t throw in the towel. Today, Noodle is a big fan of her crate. Sometimes I catch her playing in there on her own, and every morning, I have to drag her out by her little paws. (Girlfriend loves sleeping in, and would snooze until 11 a.m. if I let her. Who knew?)

So what, you might be asking yourself, can I do? 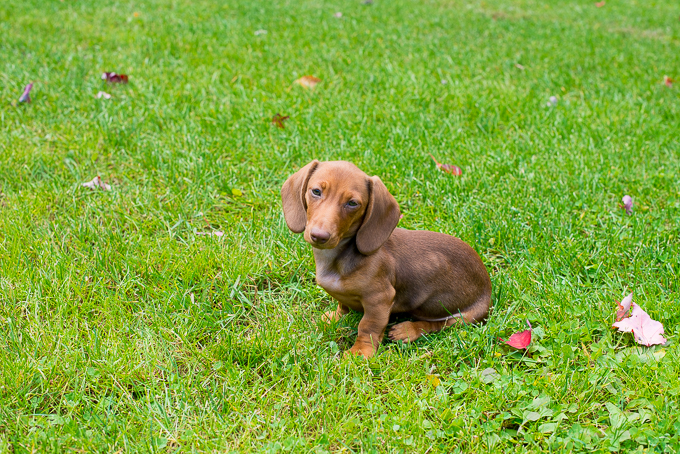 1. PUT THE CRATE IN YOUR BEDROOM. It’s my number one bit of advice for people who are having a rough (ruff?) go of it. As I mentioned before, dachshunds have a tendency to suffer from extreme separation anxiety and loneliness–especially puppies. (They miss their moms!) Placing the crate in your room can make all the difference, though.

For a while, Mitch and I resisted the idea of moving the crate into our bedroom because we wanted the bedroom to be our space. But the moment we moved it in there, we saw a huge change in Noodle. I wouldn’t say that she stopped fussing completely, but there was a big improvement. Talking to her–or talking to each other–before we all went to bed also made her feel better.

And it’s a good idea not to move the crate, as dachshunds like consistency. You might also want to spend some time helping the dog get acquainted with it. Put treats in there, and praise him when he goes in to get them. At one point, I even stuck my head in there while Noodle was inside just to show her it was safe. 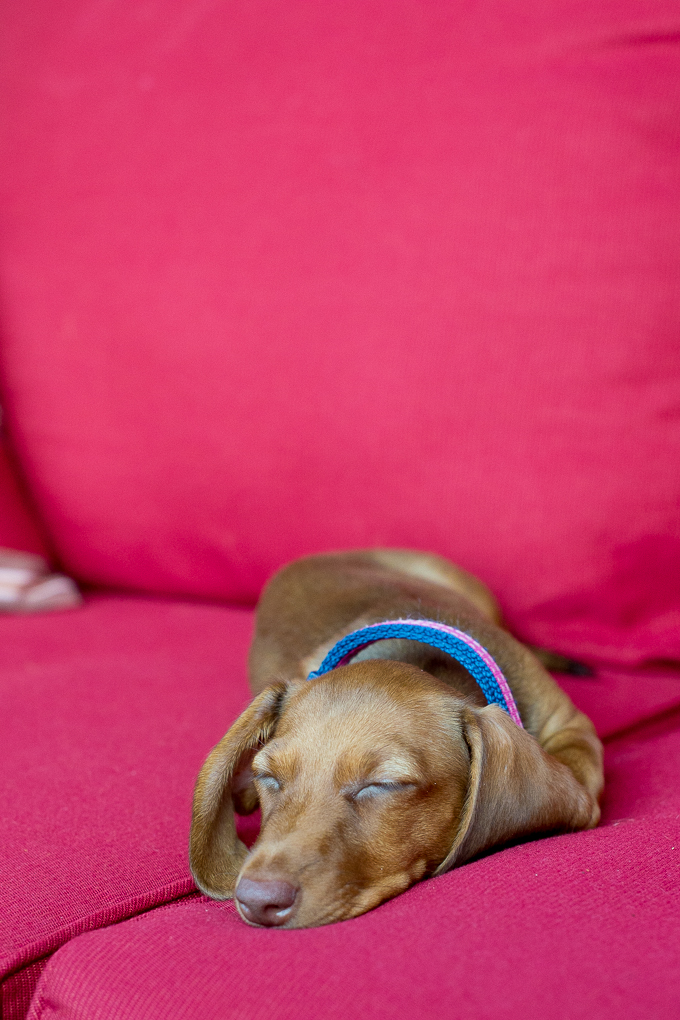 3. Use a ticking clock or white noise. It’s comforting to the dog, as it reminds him of its mother. I simply downloaded a white noise app onto my cell phone, and placed it on top of the crate. It helped.

4. Drape a blanket over the crate. Make sure the front part isn’t covered, that way the pup can breathe. But dogs are den animals, and feel safe in confined, dark areas. (It’s why Noodle’s favorite spot is under the bed!) The extra darkness also signifies that it’s bedtime.

5. Take the dog out about an hour before bed, and don’t serve him additional food or water when you get back. Of course, make sure he’s eating and drinking throughout the day so as not to torture the poor thing. But it’s equally torturous to put him in a crate when he needs to relieve himself! Also, don’t take him out right before bed, as he might confuse this with playtime. 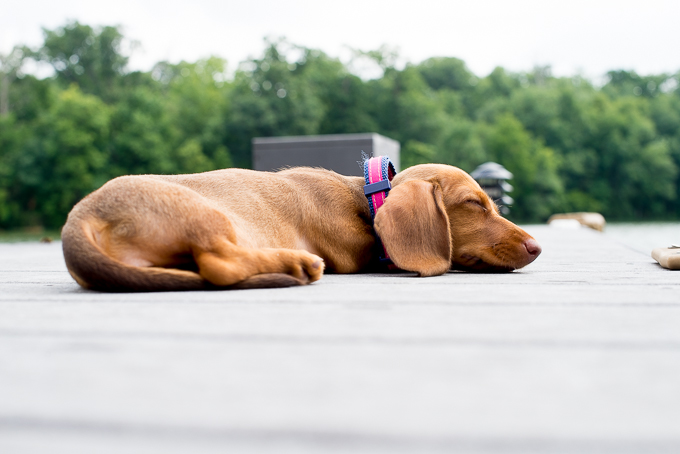 6. Have quiet time before bed. Mitch and I snuggle with Noodle on the couch, and watch a television show or a movie. It calms her down and gets her ready for bed. I should mention, however, that “Quiet Time” does not work if Noodle hasn’t had enough exercise beforehand. Dachshunds–especially puppies–have a lot of energy, and it’s very important that they burn it off during the day!

7. Limit the number of times you take him out throughout the night, and make ’em quick. If you make a fuss over him every time you take him out, he’ll associate barking, howling and crying with getting what he wants: you. Instead, take him out of the crate, quickly bring him outside, and then quickly put him back in the crate after he’s done his business. No love, as harsh as that sounds. In terms of how often you should be taking the little guy out throughout the night, a good rule of thumb is every couple of hours when they’re brand new, and then once or twice per night after three or four weeks. 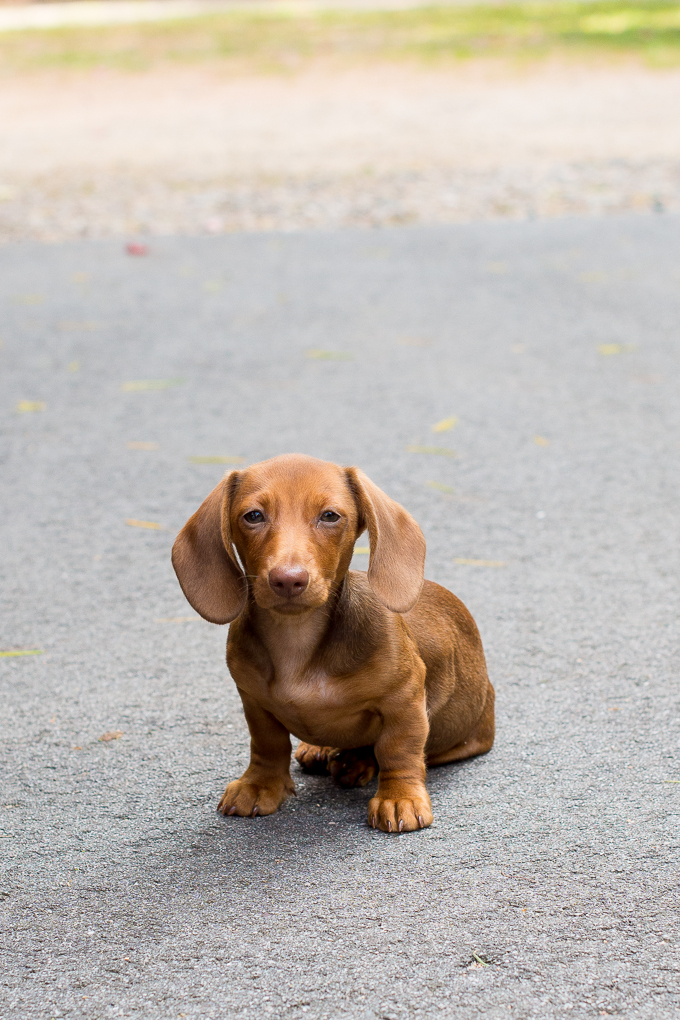 8. If things get bad, sleep on the floor next to the crate (in the bedroom) for a couple of nights. It’ll teach the dog that he has nothing to be afraid of, and that you’re not going anywhere.

9. If things get really bad, shaking a can filled with pennies can help. This should only be used as a last resort, since you don’t want to make your dog a nervous wreck. But dachshunds aren’t big fans of loud noises, and the “penny can” can eradicate bad behavior. While Mitch and I rarely use it, Noodle gets the message when we do. We used it a couple of times while crate training as well as when we were having trouble with her barking, crying and jumping while we were eating dinner. It worked like magic! (Again, use sparingly.) Another tip is sternly and loudly saying, “Noodle, NO” when the barking gets out of control. (Insert your dog’s name, obviously.)

10. NEVER cave and let the dog sleep with you. I did this way too often, and every time I did it, I erased all progress I’d made with Noodle. I know. Hearing your puppy cry is the worst! But he’ll power through… as will you. Remain strong, and remember that it will get better. 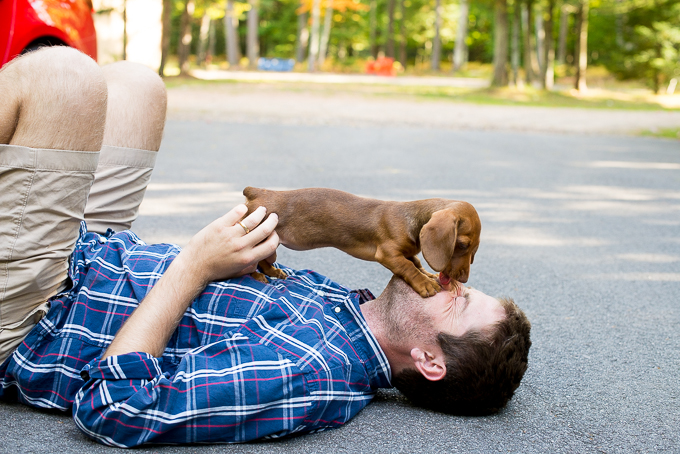 My one fear here is that this post scares off those who have been considering adopting a dachshund. Please don’t let this deter you! While my first couple of months with Noodle were a struggle, they were completely worth it. She’s beyond loyal, has the funniest disposition, is the best snuggler, and loves Mitch and me with a fiery passion. (She loses her mind when we come home, and grips our faces with her paws to lick us. It’s hysterical.) I can’t imagine life without her, and life is better because of her.

(Noodle, you are a great dog.) 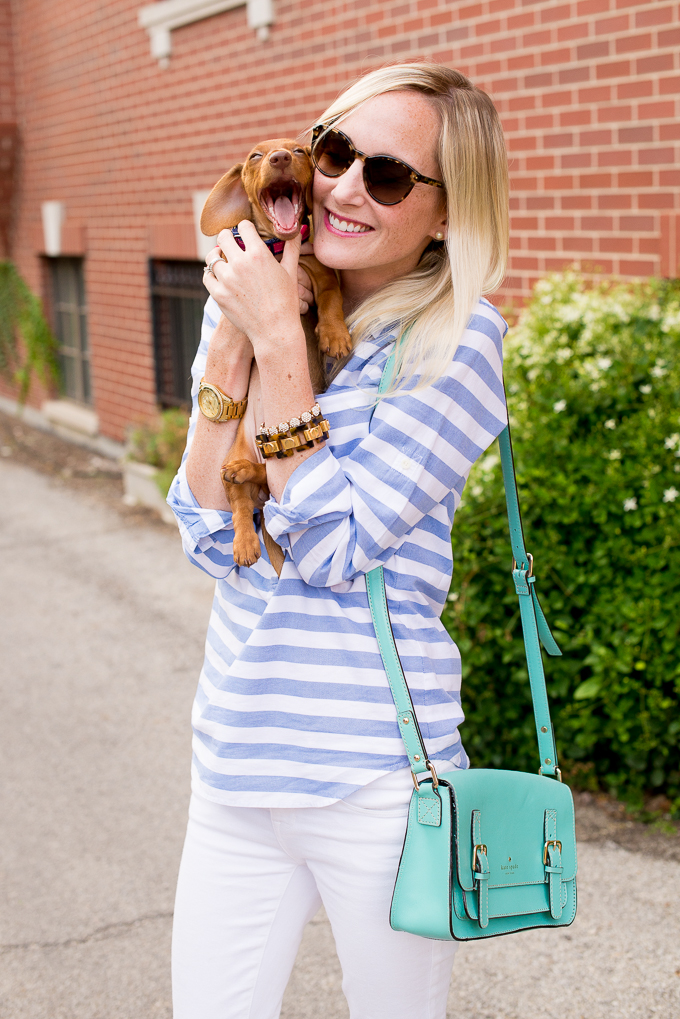 Have additional tips or tricks for crate training a puppy? Leave them in the comment section below! :) 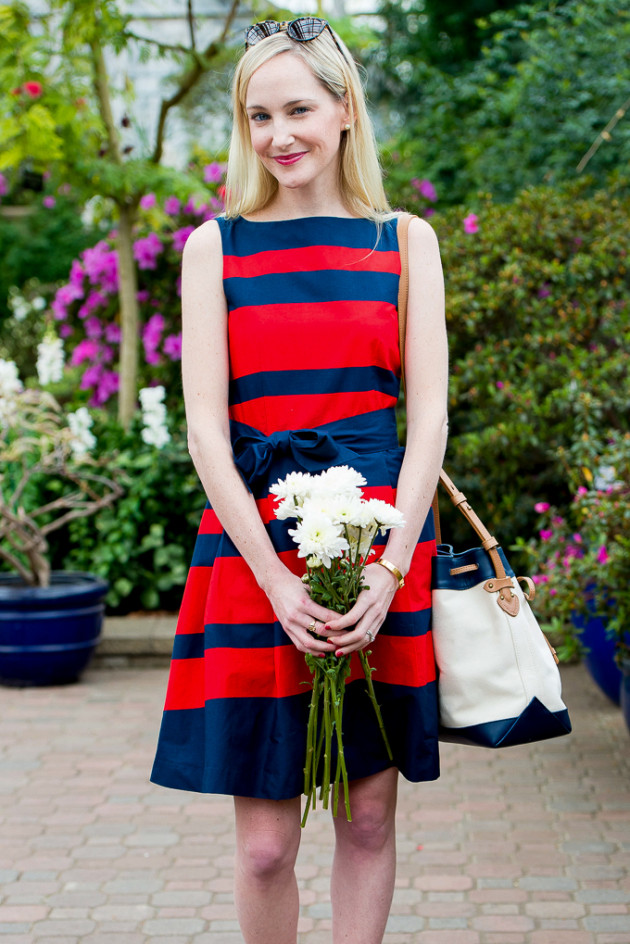