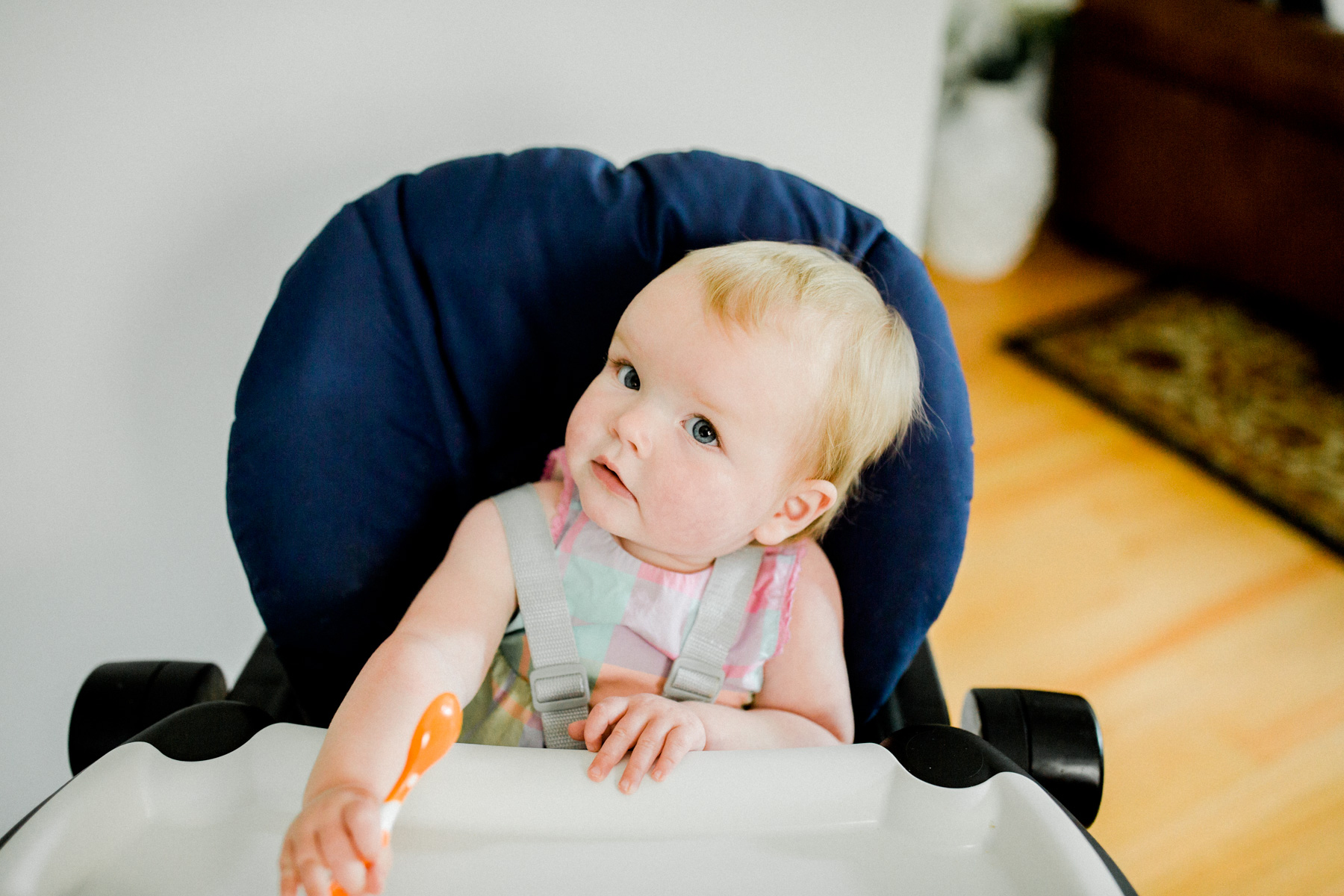 This post was sponsored by Gerber, but all opinions are our own. And as always, thank you so much for supporting the partnerships that keep Kelly in the City up and running! Also, just in case, we should mention that Emma was highly supervised while these photos were being taken.

I’m still astonished that I was allowed to walk out of the hospital with a baby 11 months ago. It honestly feels like we just brought her home! And somehow, she’s now almost a year old, and there’s a little girl living in my house.

Parenthood has been the greatest adventure of my life, but it’s also been tough. Today, though, I’m teaming up with Gerber to share the story of how we’re slowly but surely transitioning Emma to solid foods. And since people constantly stop us on the street to meet the “Real-Life Gerber Baby,” haha, this post is extra fun and cute. ;) 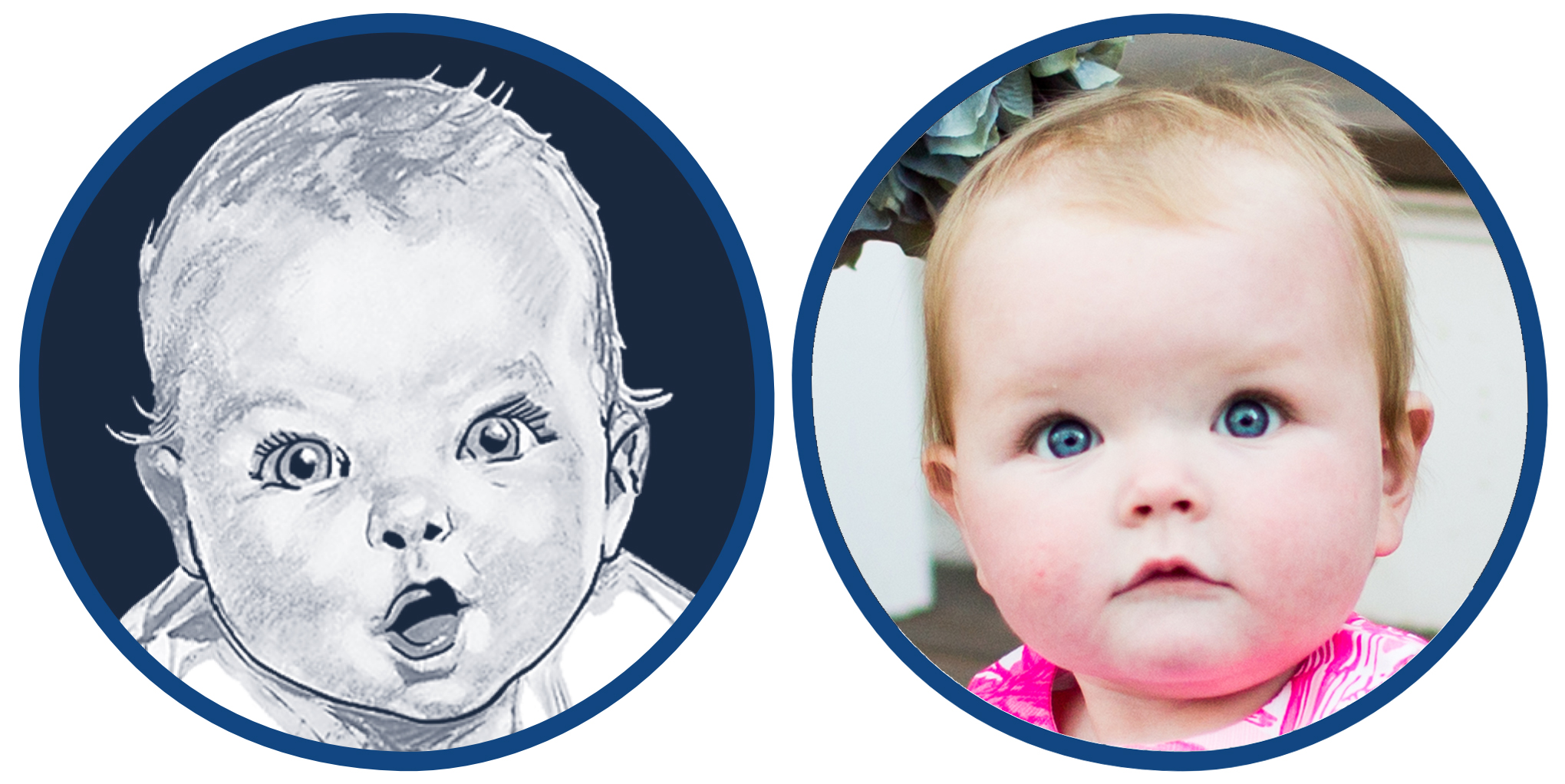 Right now, I’m in charge of a human being, which is pretty incredible. Every time I feel like I finally have a handle on parenting, though, Emma grows and advances… and I’m back to square one. I now truly think she’s smarter than me. I mean, the girl knows how to swipe right on my phone until she finds her favorite photo of Elmo. She’s mastered Baby Sign Language to tell us when she’d like more to eat, and she knows how to turn on our speaker system and play “Baby Beluga.” Heck, she’s figured out how to get my wife up before 7 a.m.! As you can imagine, keeping up with Emma is difficult. She started crawling a few weeks ago and it turned my world upside down. Now she’s standing and shuffling along the coffee table. It’s a whole new game. Square one.

While I constantly feel behind, I wouldn’t say that I came into parenting unprepared. I read a baby book! (Well, a third of it, at least.) I painted the nursery, put all the furniture together, and installed the car seat! (Okay. My father-in-law installed the car seat because I couldn’t figure it out, but I did the rest of that stuff.) I created a sleep strategy that actually worked! (Dimmed lights, story time, a full belly, a “sleep suit,” some self-settling techniques, and–of course–white noise.)

Once Emma became old enough to eat solids, though, I became outmatched. When I was training Noodle, all I had to do was stare her down. She’d eventually look away, and I’d win the battle. I tried that same tactic with Emma, and she’d look me in the eyes, scream, slap me in the face, and then throw the food all over the floor. This girl is pickier than Kelly, and we all know about that. (Just take a look at her food pyramid!) I long for the days when Emma was breast feeding. She’d cry, and I’d wake up, change her tiny diaper, hand her to Kelly, try as hard as I could to stay awake, fail, and pass out. I’d then repeat the whole dance a few hours later–but the girl always had a full belly.

Today, Emma has ridiculously picky taste, like some kind of Food Network fan on vacation. She refuses nearly everything. Trying to get food in her mouth is like a video game set on “difficult.” Scratch that. Impossible. If, after 10 minutes of trying, I manage to get something in her mouth, her face scrunches up in horror and her expression says it all:

She literally gags if I show her a spoonful of puréed veggies or fruits. She even hates the food she likes. For example, she loves crackers… but if the crackers aren’t a very specific shade of orange, she tosses them on the floor. Emma, we aren’t made out of money. They are the same freakin’ crackers!

Our pediatrician says that we should be weaning her off formula around the time that she turns one. So with the ticking, we’re in need of a savior.

Both Kelly’s mom and my mom suggested we try Gerber cereal. And guess what? Emma. Actually. Likes. It. (Turns out that she also likes hot wings and cayenne pepper. #Normal)

Everywhere we look there’s a new parenting trend, strategy or hocus pocus methodology that’s almost always expensive, time-consuming and ineffective. Gerber, however, has this magical product that actually solves the problems we’re experiencing. Emma gulps the stuff down (pickiness problem solved), and it fills her belly up (fussiness problem solved). When we were snapping the photos for this post, Emma grabbed the spoon, scooped up some cereal, and spooned it into her own mouth. I actually squealed!

I remember the day we found out that Kelly was pregnant. I marched her to the store to load up on prenatal vitamins. And then when Emma was born, we supplemented Kelly’s vitamin-enriched breast feeding sessions with iron-enriched formula to give Emma an extra boost in minerals that Kelly (bless her heart) couldn’t. But now that we’re weaning Emma off formula, where are these vitamins and minerals going to come from? Orange crackers aren’t going to do the job, people!

Thankfully, Gerber cereals have it all: calcium, zinc, vitamin C, vitamin E, six different types of B vitamins, and a whole bunch of other important stuff that I would have forgotten to give my baby. It’s non-GMO, and most importantly, just two servings of it has 90 percent of a baby’s required daily iron. Clearly, Emma eats way more than two servings, so we’re all good there. ;)

Our local Walmart Neighborhood Market is on the way home from work, so during the school year, I dipped in very often to buy a ton of Gerber cereal varieties, including Emma’s new favorite: Oatmeal & Banana, which makes me happy because 1) That’s exactly what I eat for breakfast so I feel a bond, 2) It introduces new flavors to her palette that may eventually lead to other solids, and 3) We’ve noticed that she takes far fewer bottles when she eats it. Now that it’s summer, I take Emma with me. She loves riding in the shopping cart, and I think it’s clear that she inherited Kelly’s love of shopping.

In conclusion, I don’t think I’m ready to write a parenting book just yet, but if I had to, Emma’s baby food timeline would look something like this:

Stage Three: Refusing Everything in sight 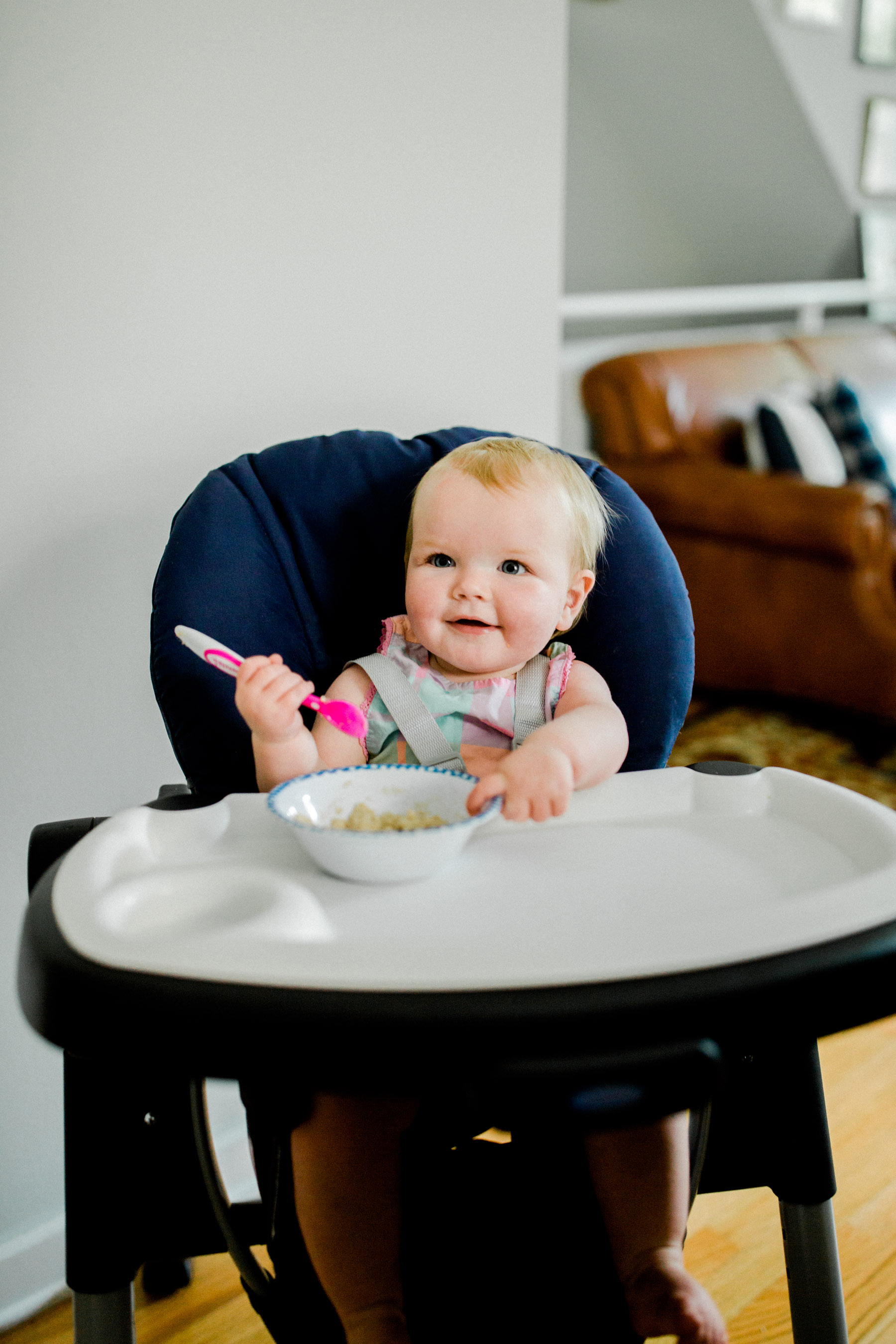 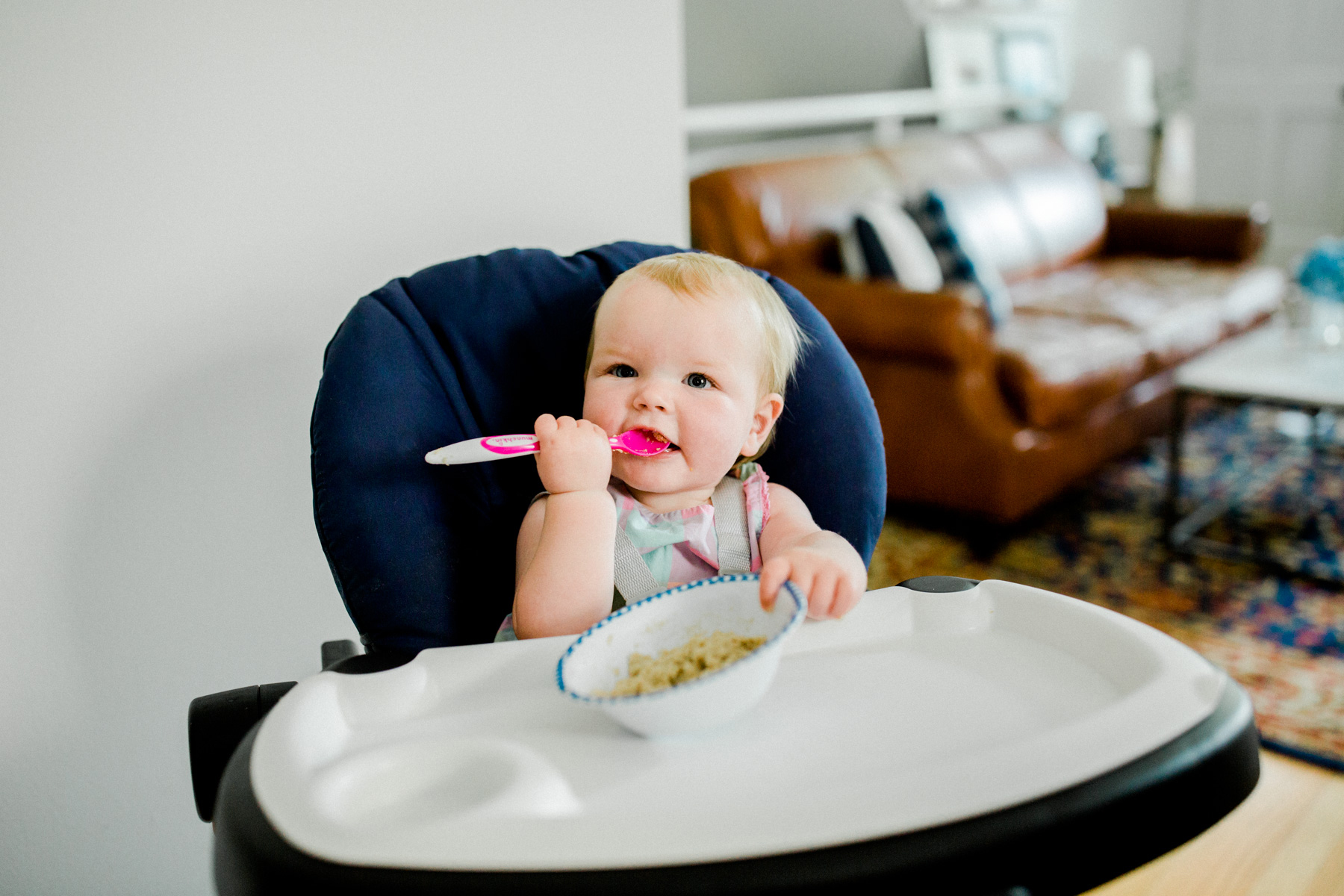 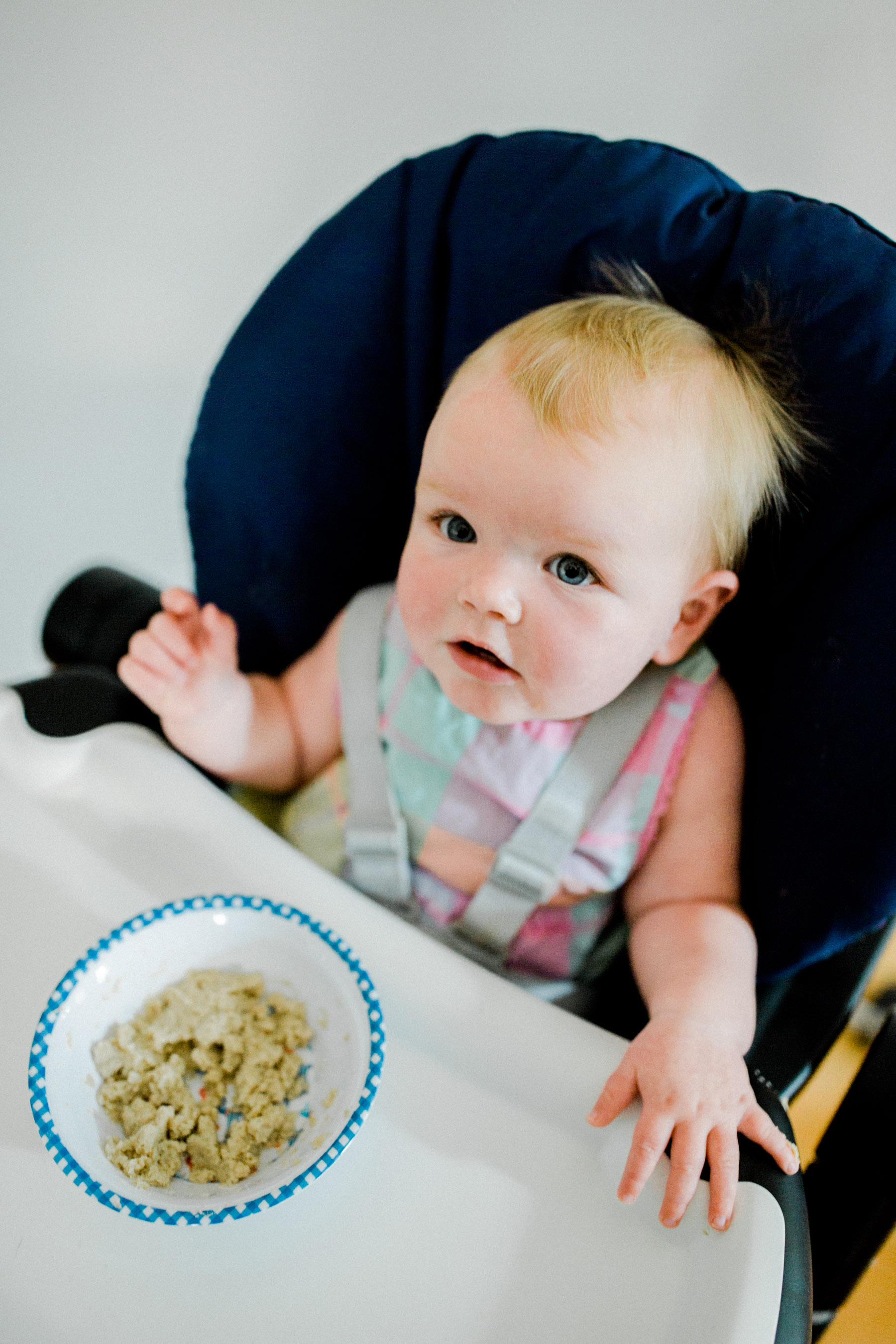 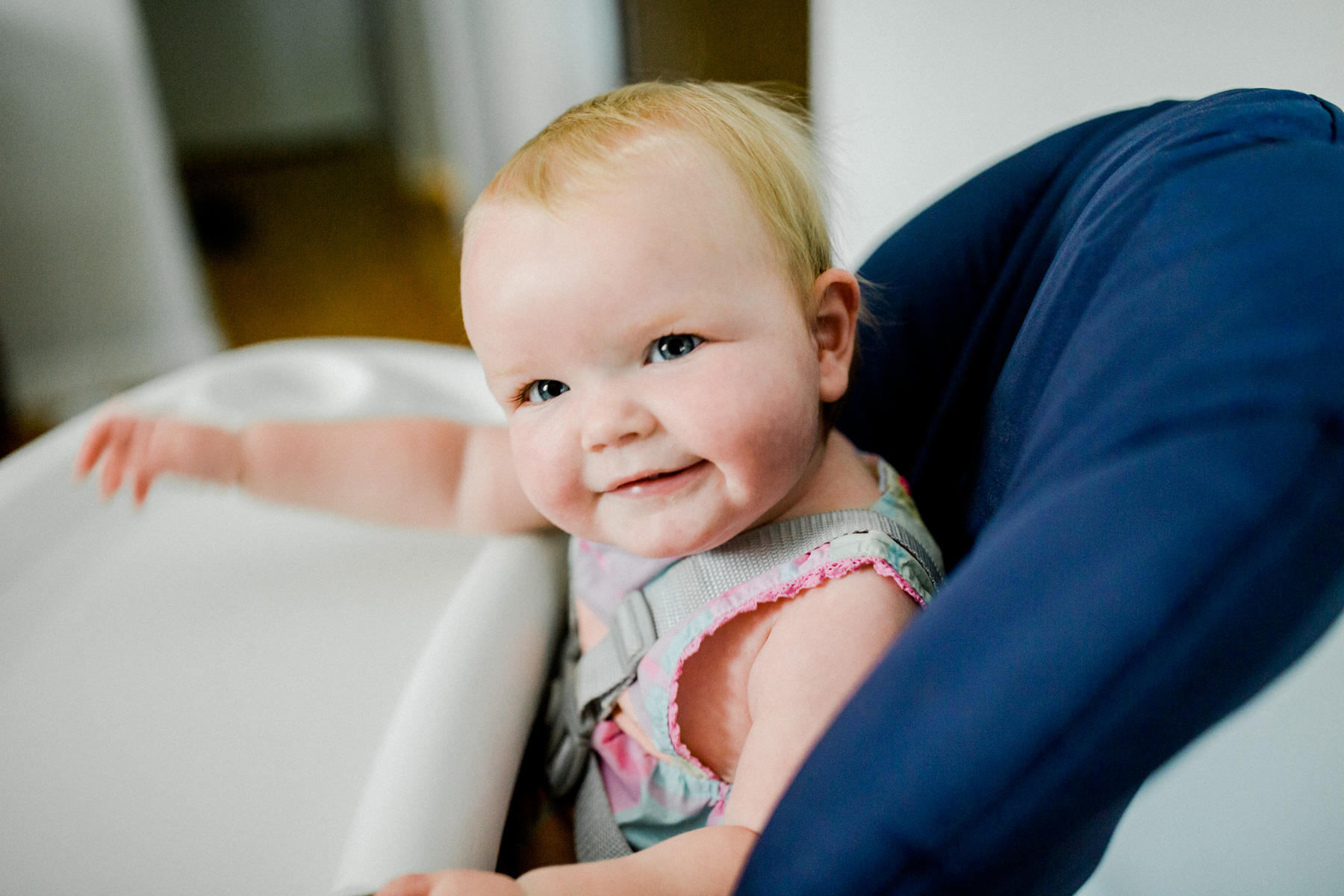 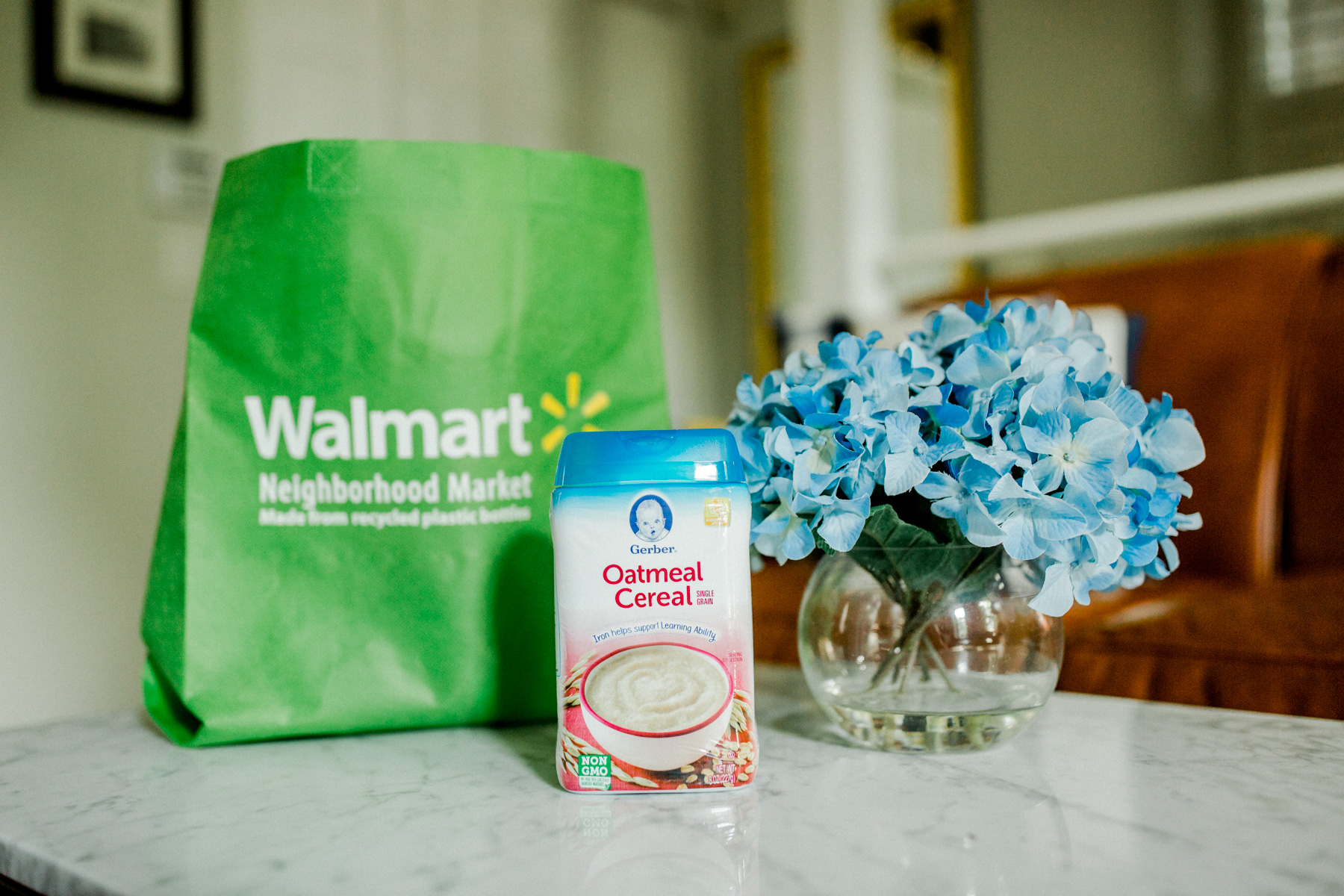 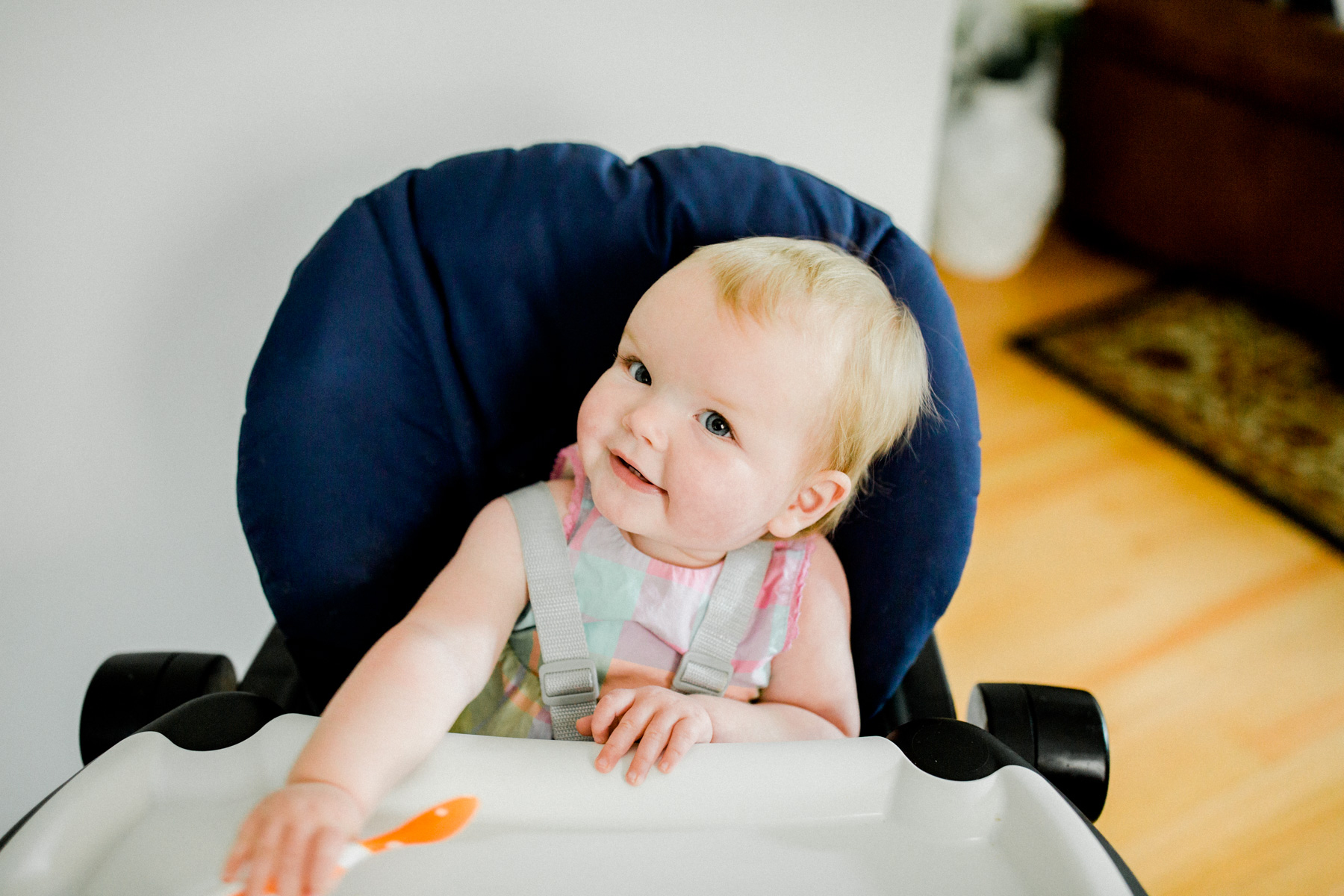 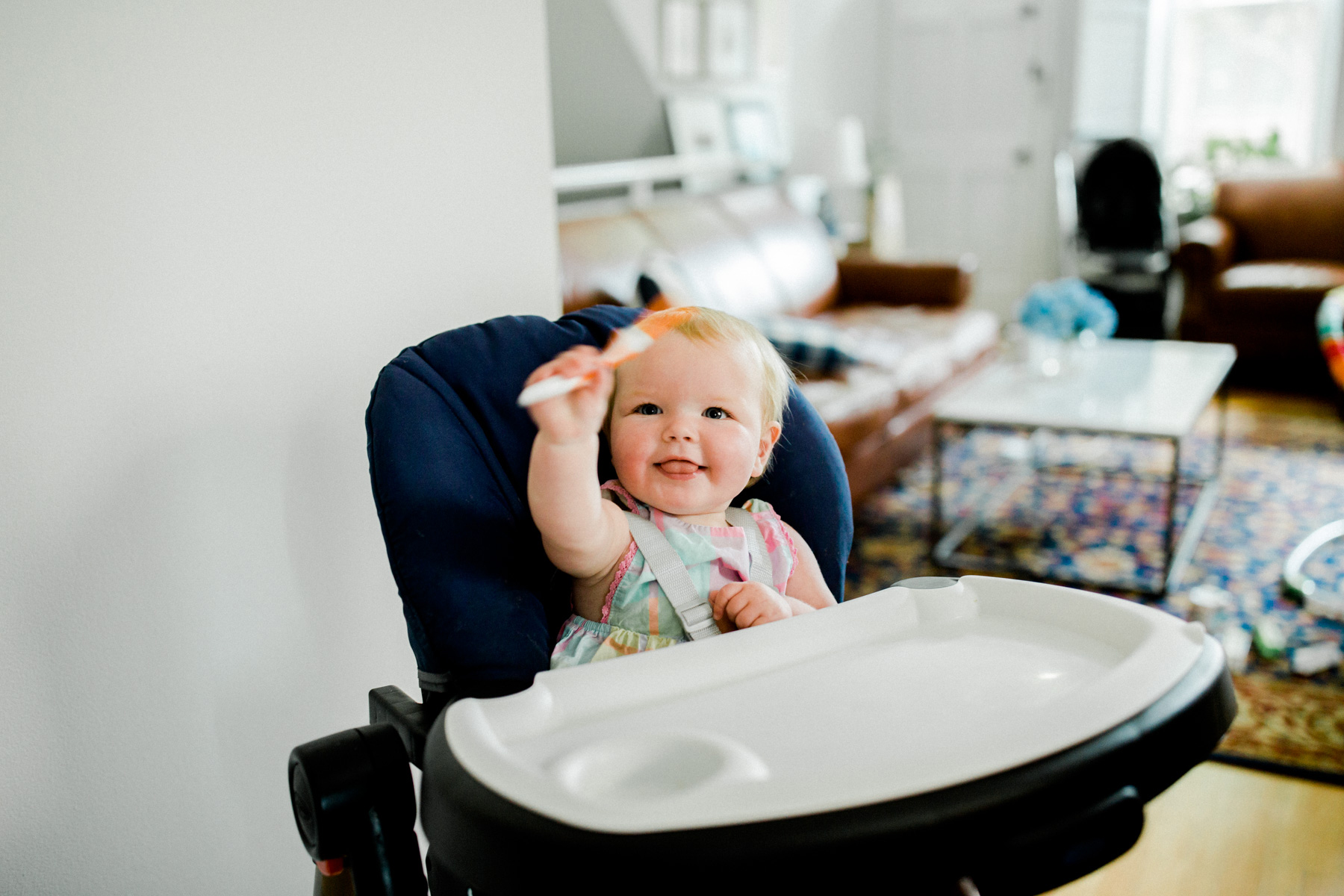 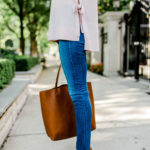