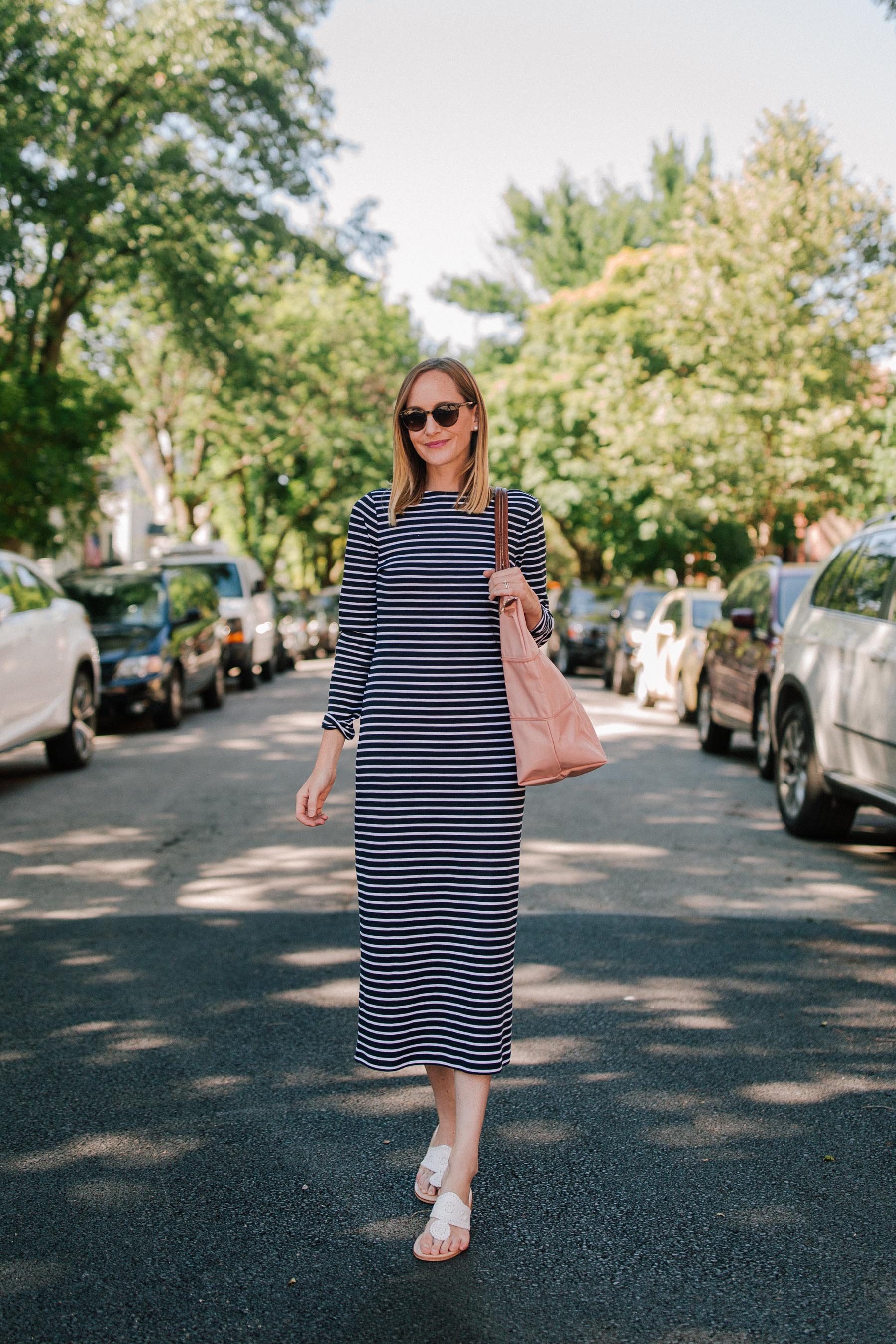 1901 Stripe Midi Dress (Other 1901 products included in the Anniversary Sale.) / Jack Rogers (Run TTS.) / Longchamp Expandable Tote (I think it’ll be restocked in a couple of days; be on the lookout. In the meantime, here’s the leather version which is part of the sale, the traditional tote, and the backpack.) / Barefoot Dreams Cardigan (Also love this one and this one.) / Similar Sunglasses

I have so many things to tell you, so let’s do this bullet-point style!

It was love at first site when I saw this one. It screams Kelly Larkin. ;) The navy stripes?! The buttons down the back?! The midi cut?! The sleeves?! It was a no-brainer, for sure.

First of all, I couldn’t believe how flattering the dress was. Even Mitch commented on how much taller I looked when I was wearing it, and he’s constantly (lovingly) teasing me for being a shorty. (I’m between 5’4 and 5’5, btw. Pretty average, I’d say! But I guess when I take my heels off, it’s a noticeable difference, haha.)

I also love that I can wear the dress now, but also well into the fall. It’s a classic! And it’s 100-percent coming with me to Martha’s Vineyard and Nantucket! I found that it’s lightweight enough to stay cool throughout the day, but then substantial enough to provide some coziness for chillier nights.

A note about sizing: I would go up one size in this. I almost always wear an 0/XS in dresses since I have a small frame, but I definitely needed to size up to the small. Granted, I tend to like my clothing a little looser, but friends who have the dress agree that it runs a little small.

For styling, I would recommend scrunching/rolling the sleeves, just because I love that look. ;)

I know. The expandable version is currently sold out. But I’m pretty sure it’s going to be restocked in a couple of days when Public Access goes live, as that’s what happened last year. So keep an eye out for it!

My thoughts on the tote is that it’s a fabulous travel bag. I don’t know about you guys, but I always leave for trips with a reasonable amount of stuff in my tote and return with it overflowing. 😂 SO NICE that it expands to just about double its zippered size for occasions like this. Basically, it’s the Disorganized Girl’s dream bag.

I’ve received a few questions about what I think about the zipper, and I have to say that I think it’s really cute! You see the traditional tote (also a must-have, and currently in stock) everywhere, but the zippered version is far less common. I like that! And yes: it’s very easy to zipper apart and together. And that’s coming from a girl whose coats eat their zippers on the reg. (Anyone else ever get stuck in their coat at the worst possible moment? Ugh. It happened to me on a first date once. So embarrassing, haha.)

Side note: this leather version of the bag is part of the sale, and it’s a dream if it’s within budget. And this is the backpack I use when I want to be hands-free with Emma. It’s awesome! Holds a lot.

YES. Friends, the Barefoot Dreams collection lives up to the hype. They are BY FAR the coziest, softest sweaters I’ve ever owned (literally zero itch), and I can’t recommend swooping one or two up right now, since they’re marked down.

The one I’m wearing in these photos has more of a wrap feel to it, and I like the fact that it doesn’t have a hood. (Makes it a little dressier.) The hooded version in gray, though, is definitely my favorite. It’s a little thinner but I just think it’s going to go with so much this fall, and will accompany me on nearly every trip to the playground. (So cute over a button-down, right?!) I’ll admit that I also have the more substantial cardigan, which is what I reach for at night. It’s my cozy, hang-on-the-back-of-the-office-door sweater. It’s a little bulkier but all the more cozy because of it. 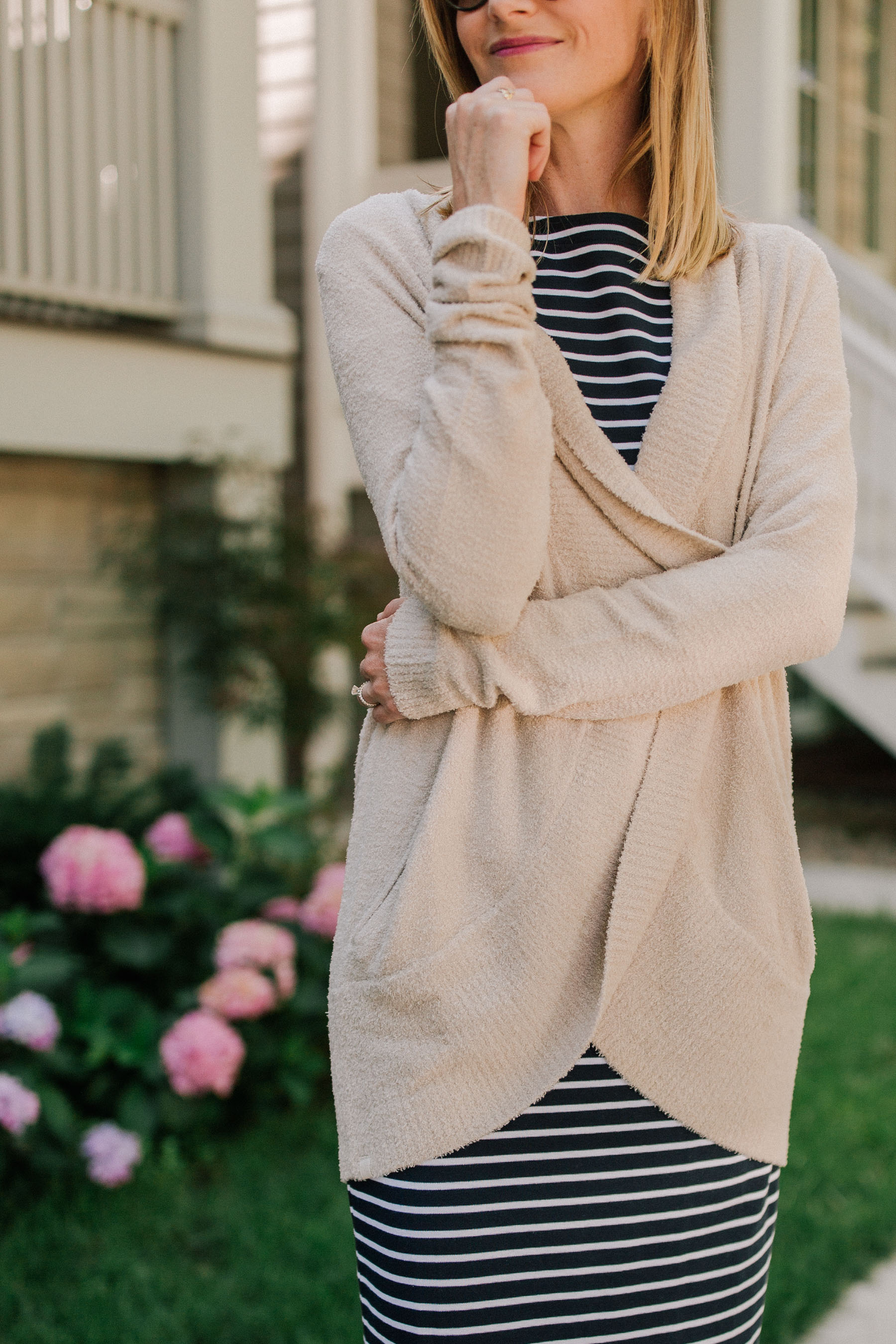 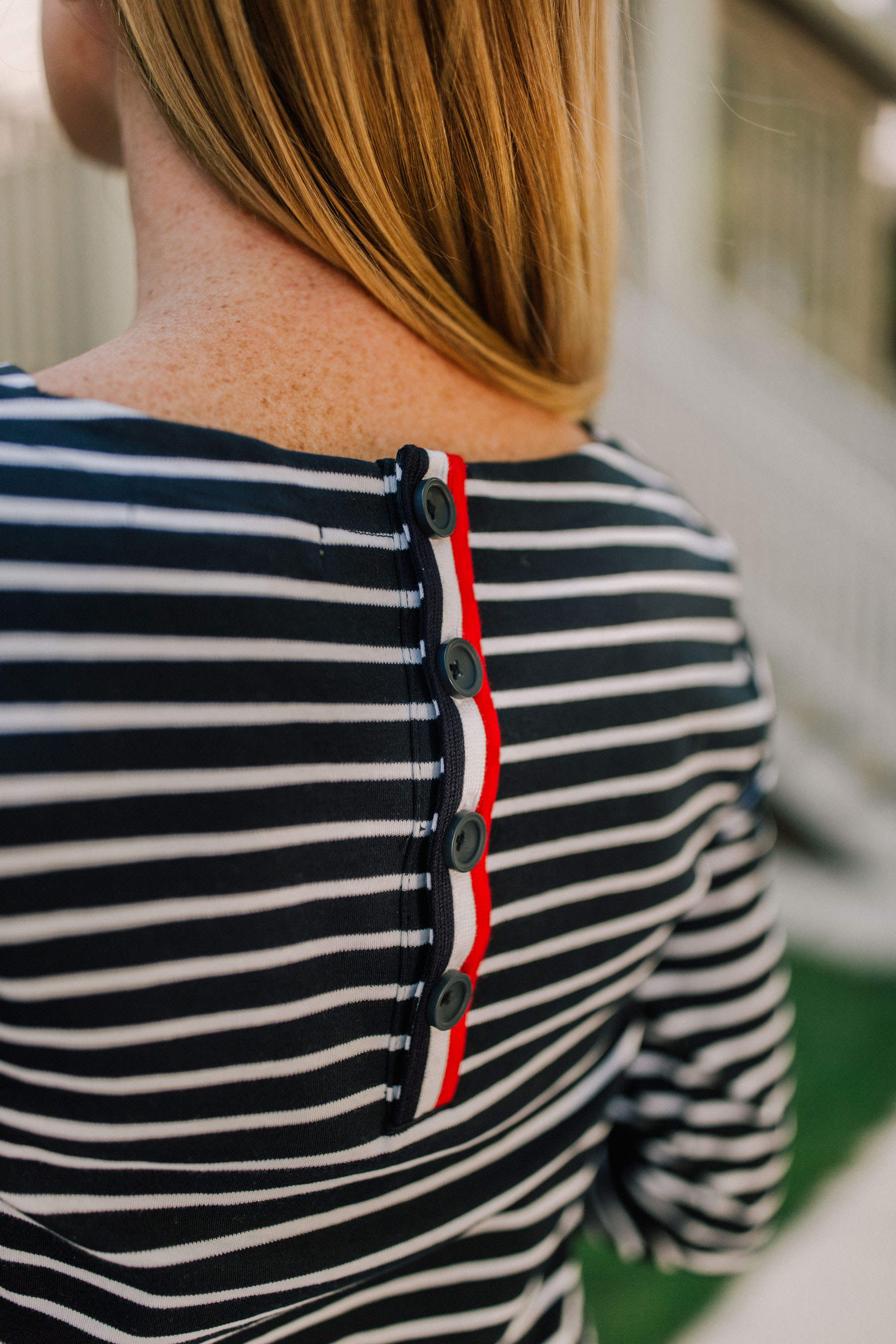 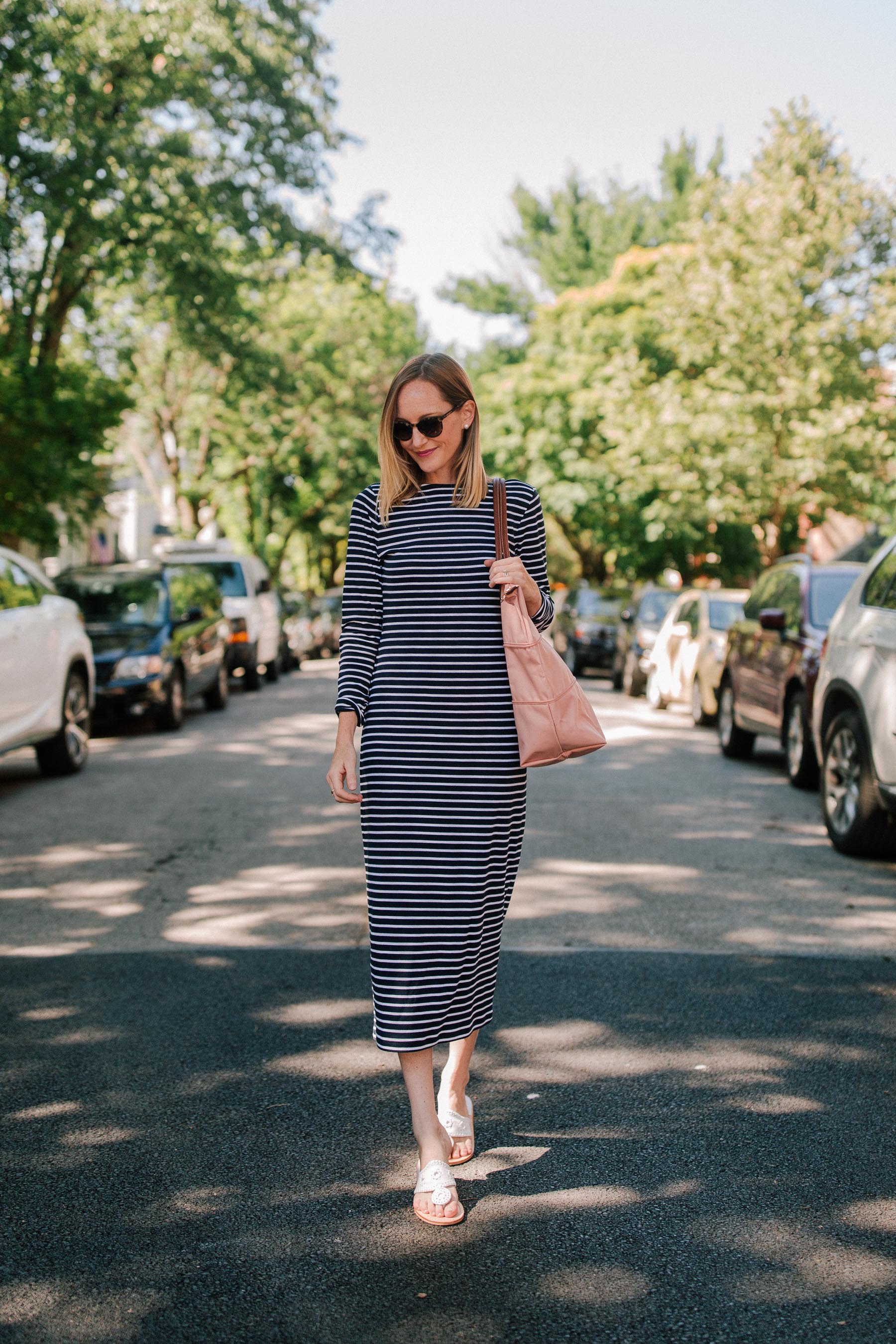 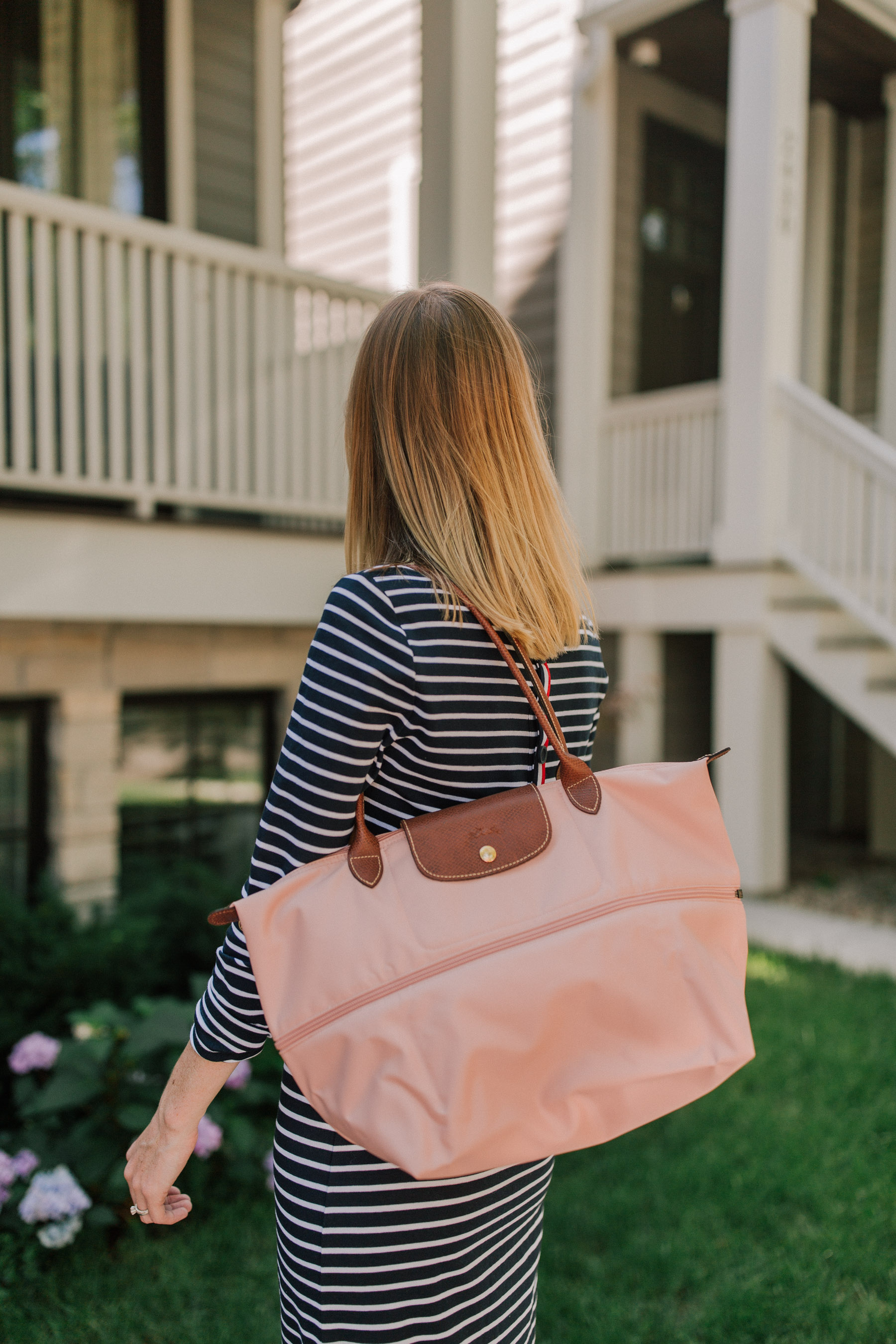 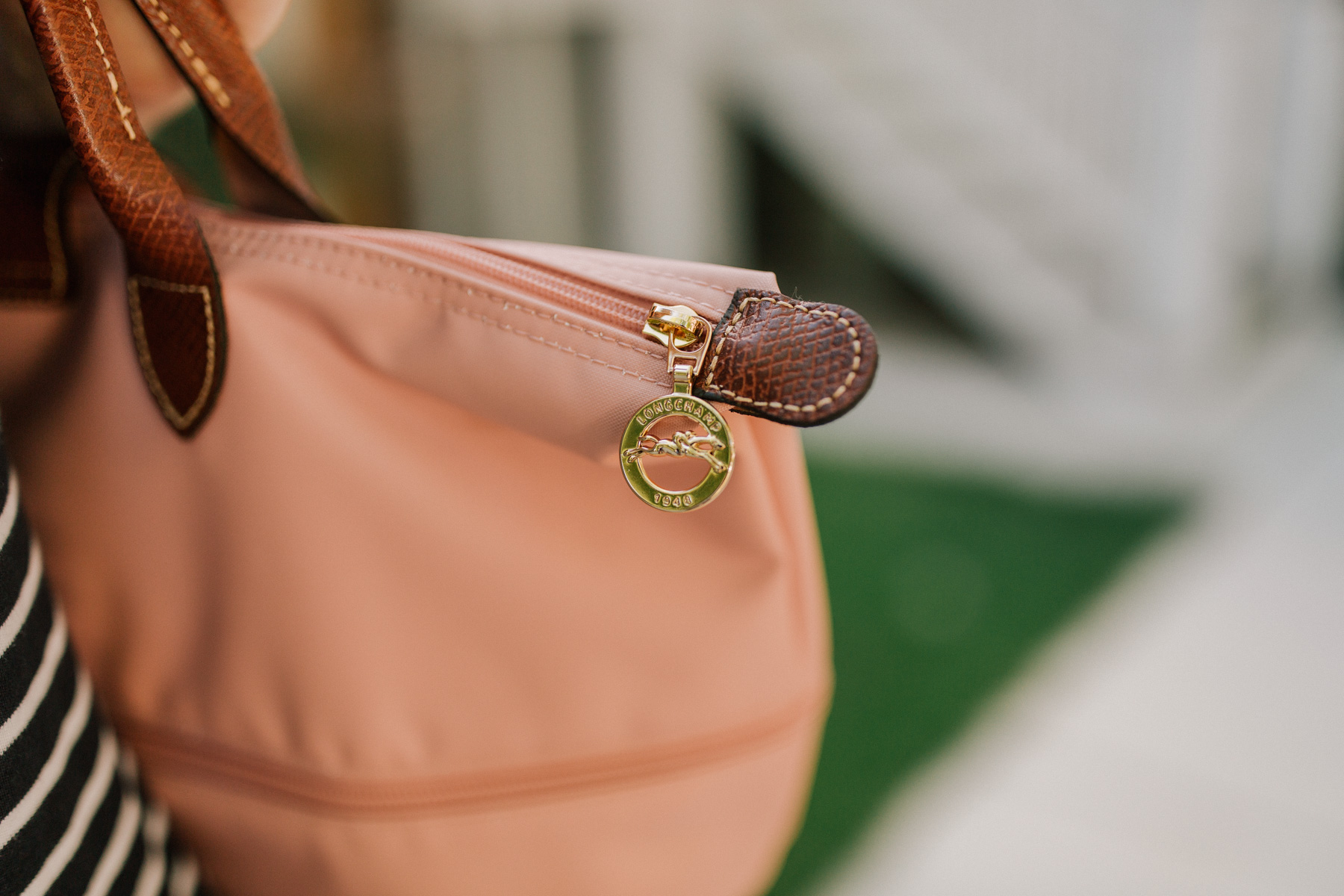 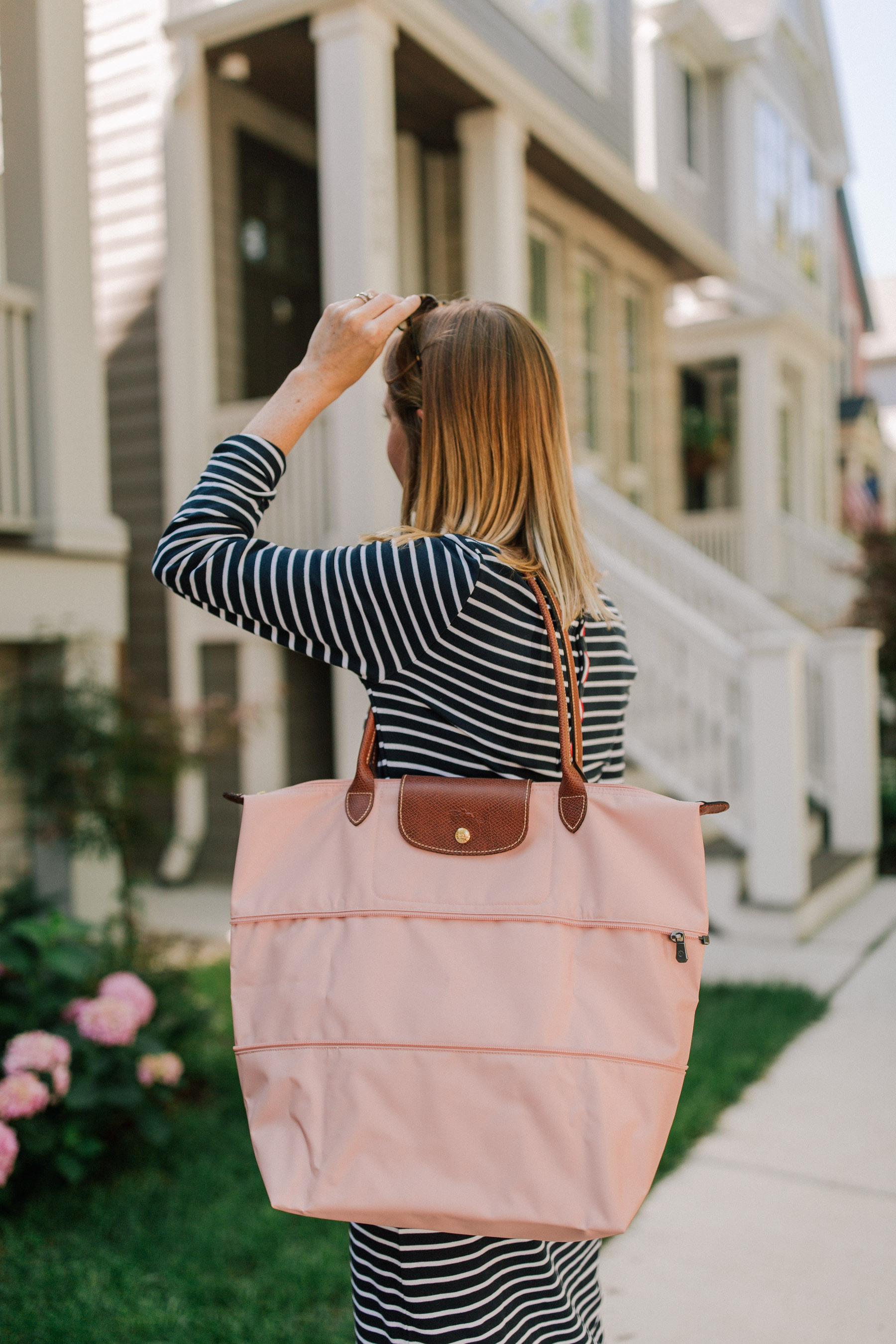 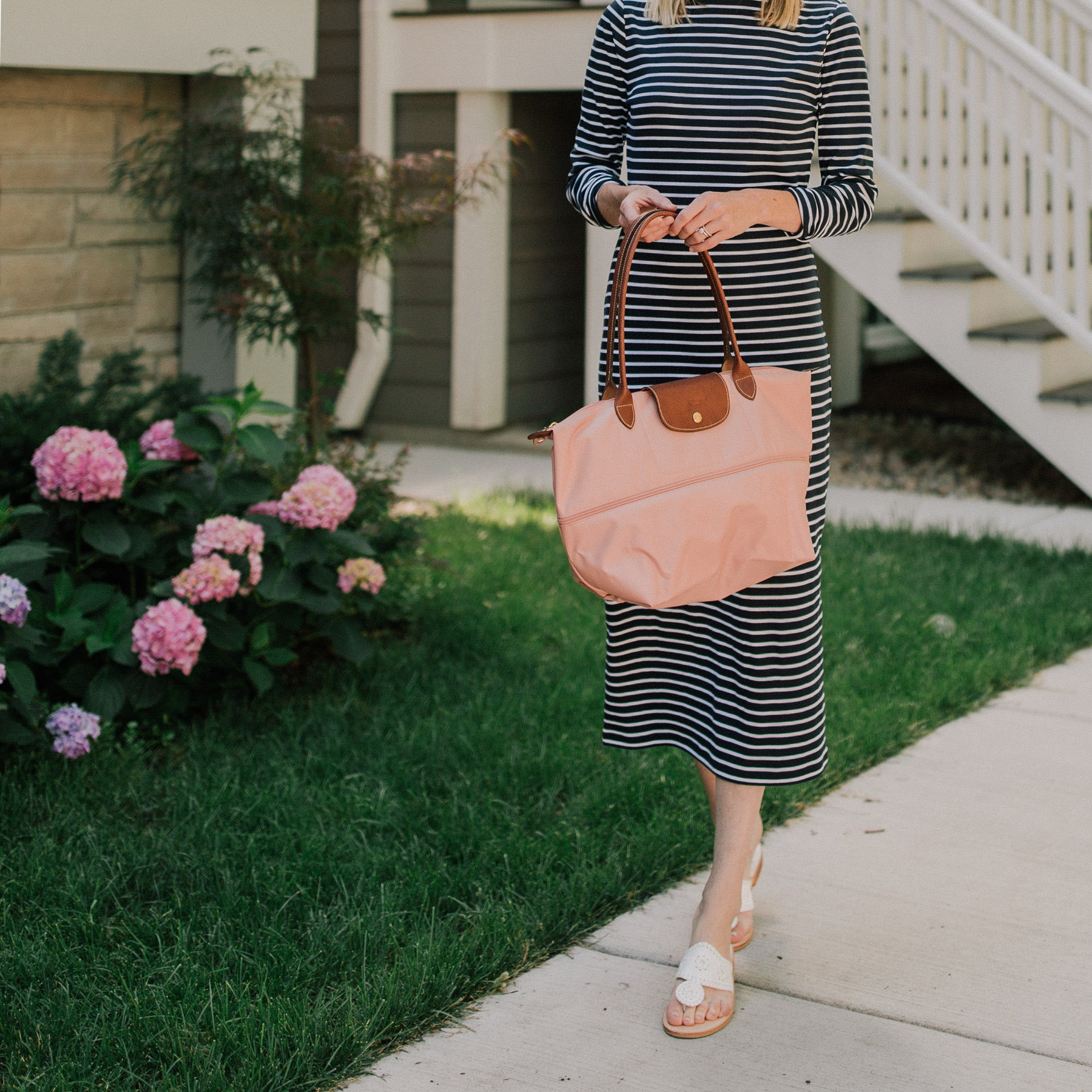 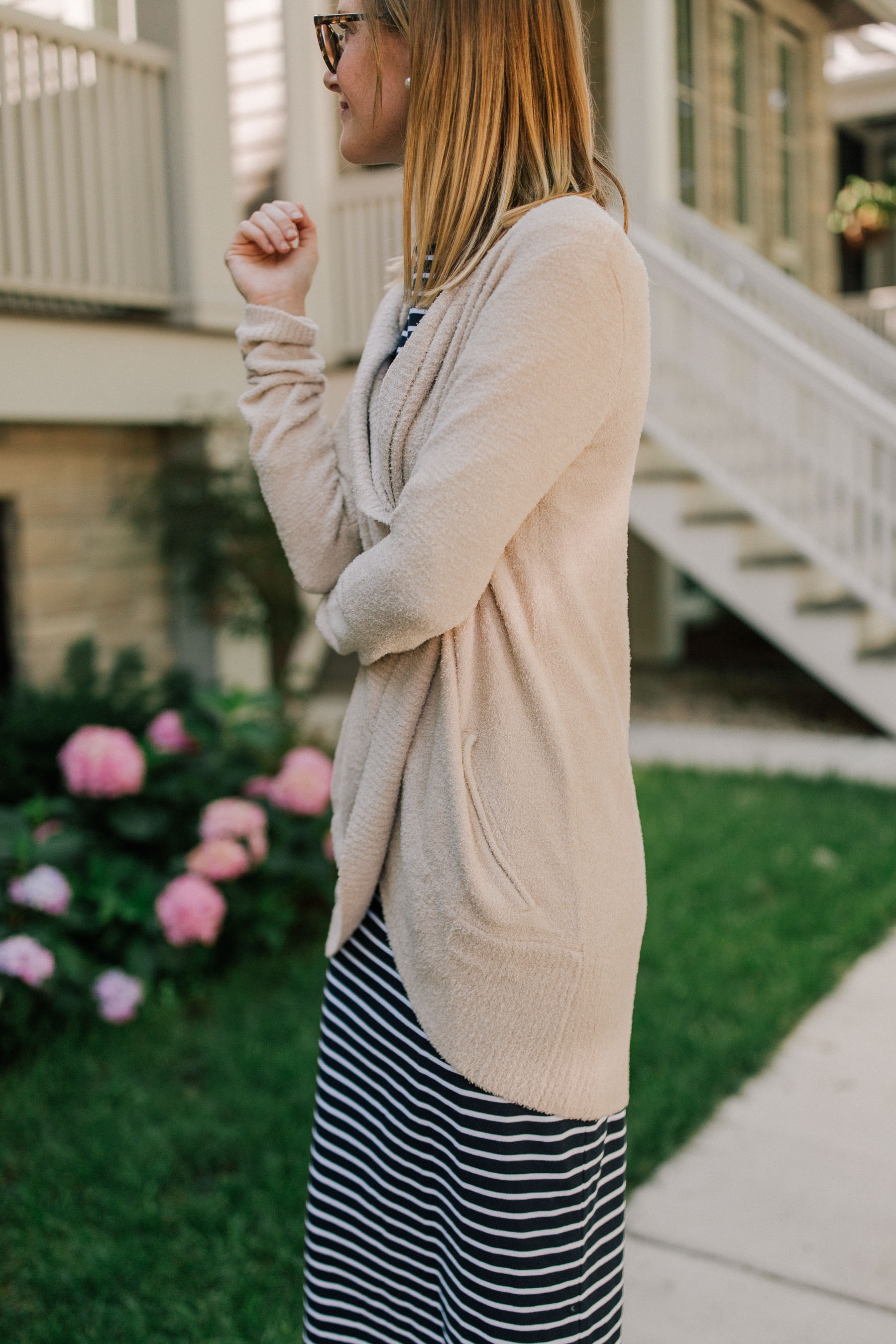 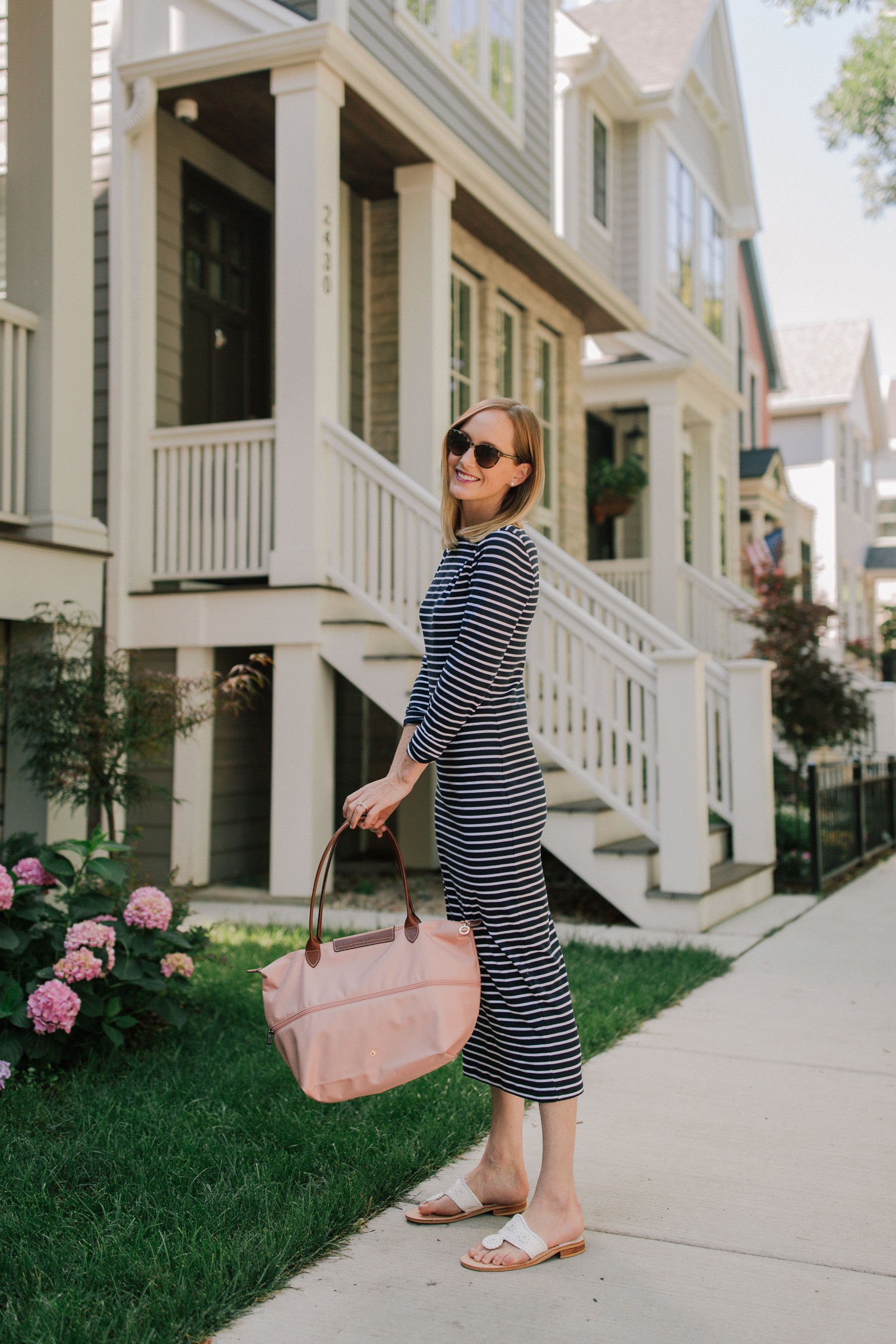 1901 Stripe Knit Midi Dress (Other 1901 products included in the Anniversary Sale.) / Jack Rogers (Run TTS.) / Longchamp Expandable Tote (I think it’ll be restocked in a couple of days; be on the lookout. In the meantime, here’s the leather version which is part of the sale, the traditional tote, and the backpack.) / Barefoot Dreams Cardigan (Also love this one and this one.) / Similar Sunglasses

Don’t forget to comment in the below comment section to be entered to win $100 to shop the sale or buy a ton of gummy bears! 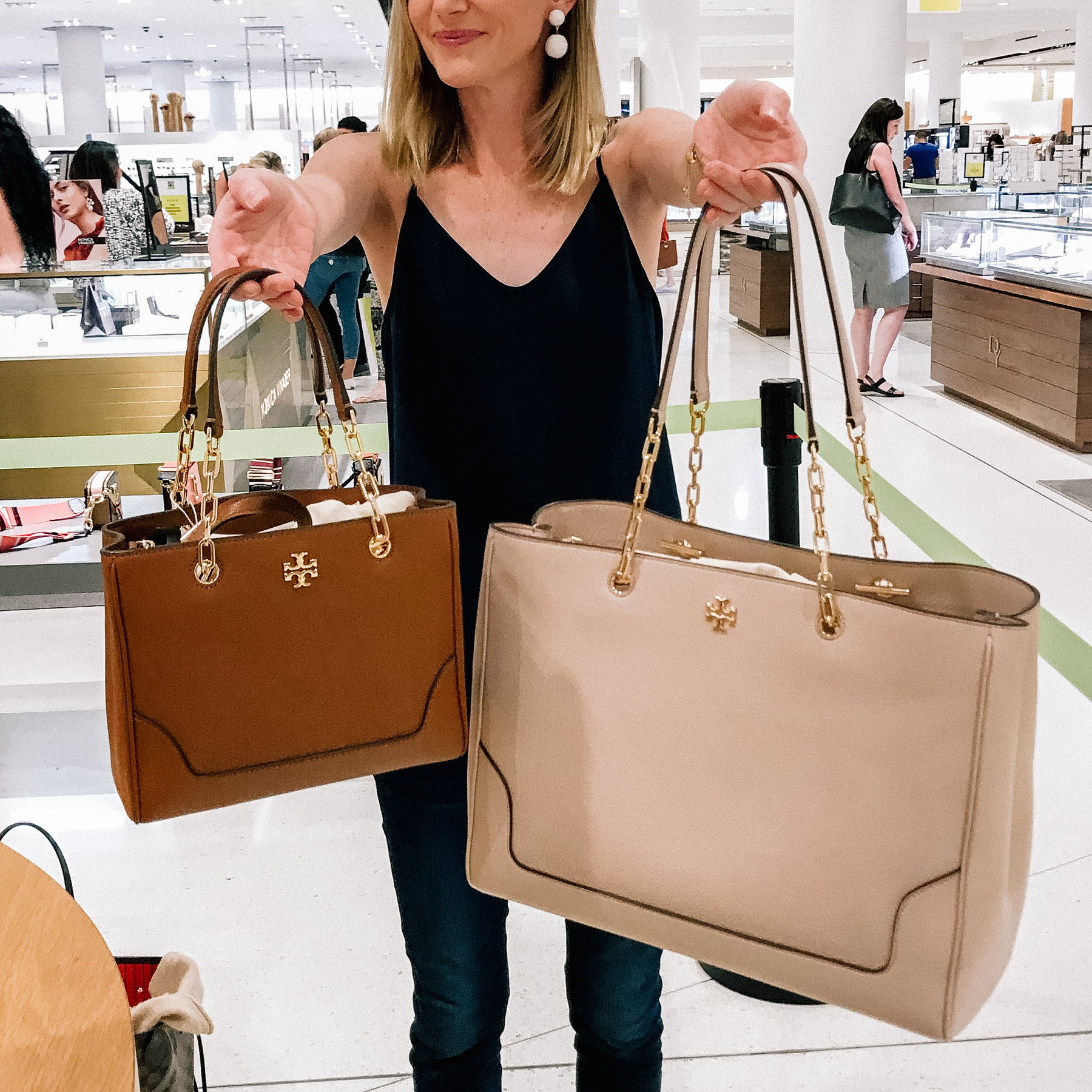 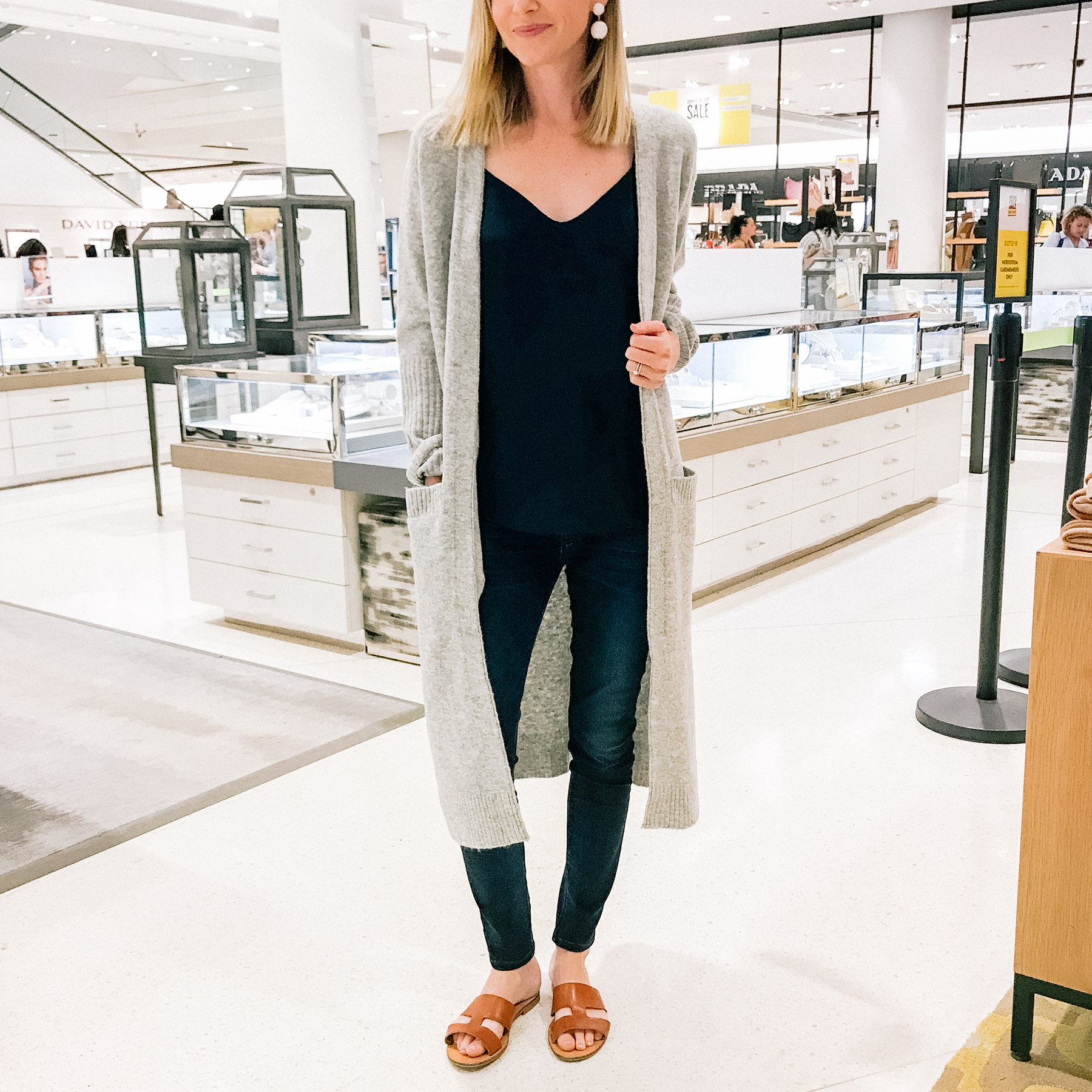 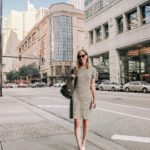