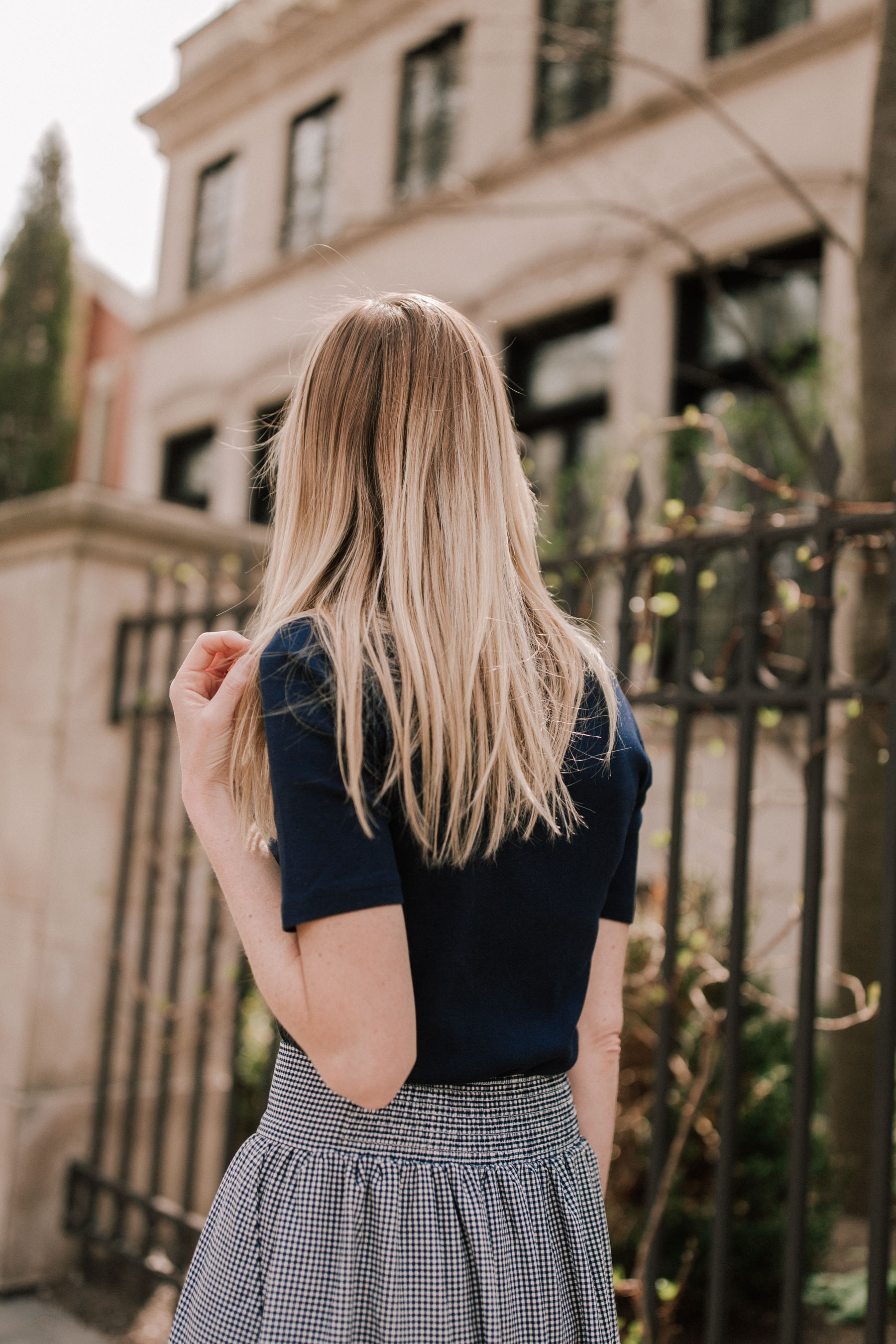 Today I’m re-publishing an old blog post with new information. It’s one of my most-read pieces, and I realized that it was high time for an update on my hair journey! Here we go:

It’s probably pretty evident that I don’t know much about beauty products, but I HAD to write this post because it truly changed everything for me in the hair department. I kind of can’t believe that Olaplex (available via Sephora/Nordstrom/Amazon) is real, and I’m hoping that this post will help others who are in a similar predicament. :)

All I dream about is long, thick hair that looks awesome when air dried and doesn’t frizz. Unfortunately, though, I have dry, frizzy, baby-fine locks… and since college, I’ve been on a mission to destroy every last hair on my head with the help of bleach and a trusty flat iron. (Would you believe that before this obsession started, I had long, silky brown hair down that fell to my waist?! It’s true.)

Because of all this, my hair has felt like straw for the last few years. To boot, I had a baby about a year an a half ago, and roughly half of it fell out. The STRUGGLE. (In case you’re wondering, this is common! It’s slowly growing back, but it’s been rough.)

After I had Emma, I realized just how much I wanted healthier hair, and I decided it was time to make some major changes in order to achieve that. So: 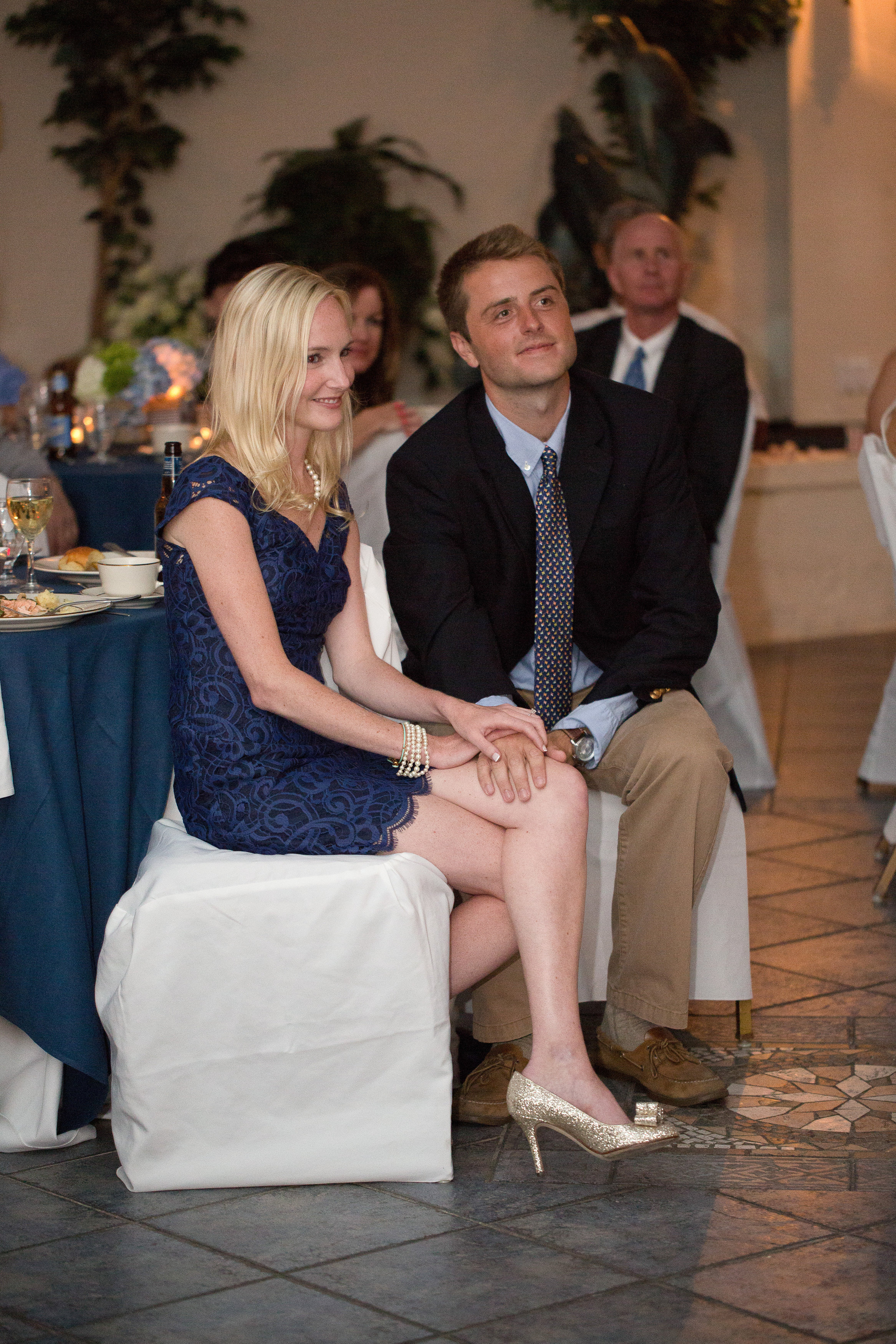 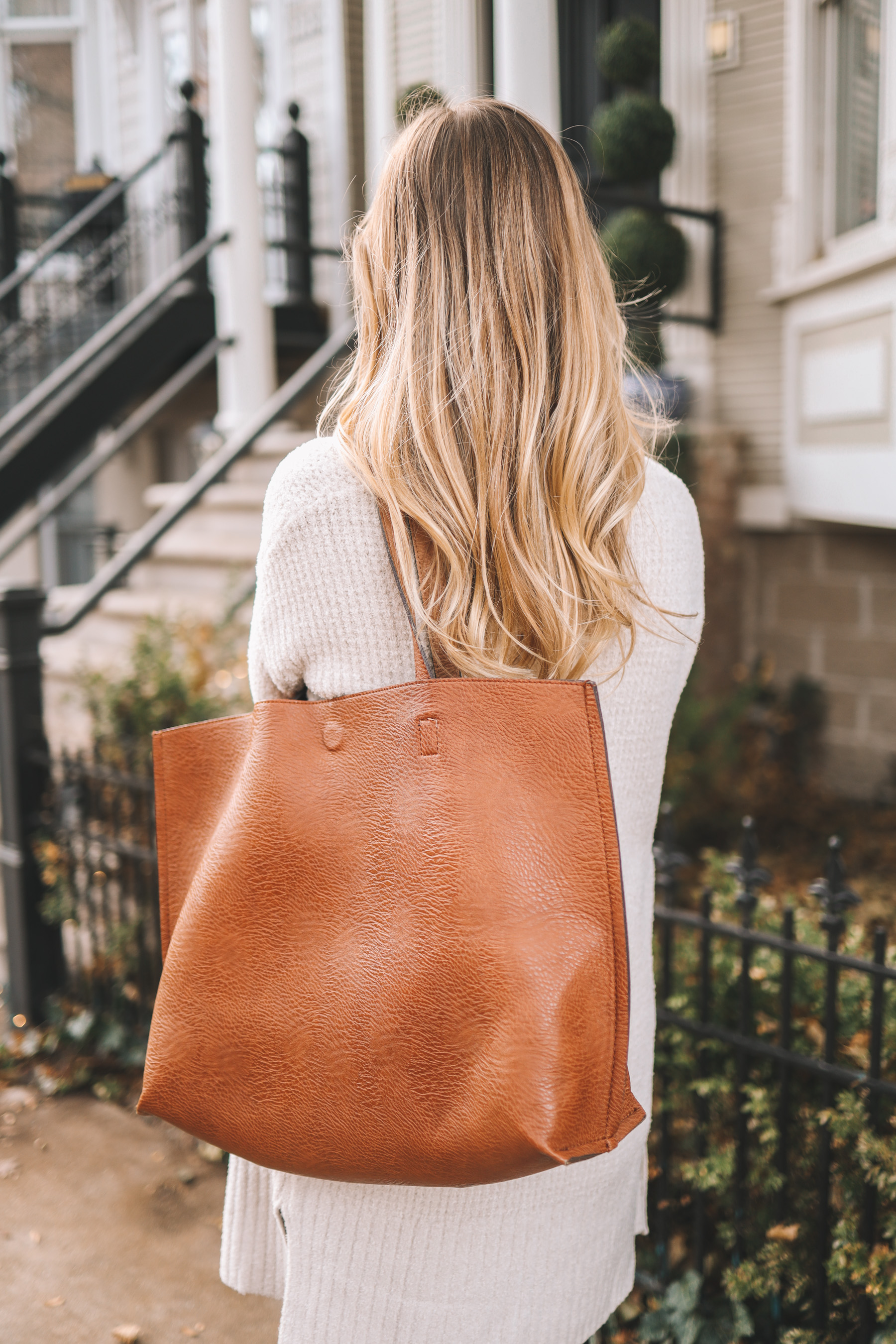 When I went in for the balayage treatment, my stylist told me about Olaplex. Widely used by actors and actresses who regularly go from dark to light and vice versa for different roles, it’s known as a miracle product for actually restoring and repairing lifeless, dry and damaged hair. (It glues back together the broken bonds that result from over processing or thermal styling.) For a while, it was only a three-step salon process, but it’s now available to purchase!—find it here via Sephora/Nordstrom/Amazon—in one- or three-step treatments, and you can use it at home whenever you want.

Note: The one-step retails for around $28, and the three-step goes for $250, but the bottles are much larger. The one-step is SUPER easy, while the three-step is a bit more complicated. It’s typically administered in a salon during color treatments, but again, you can do it at home as well, even if you aren’t dyeing your hair. Just be sure to follow the directions.

Since my stylist called it a “magic unicorn,” I figured I should give it a try.

For my first time, I did it in the salon with my stylist, and we went with the three-step process since I was also getting a color treatment. It took roughly a half hour, which was incredible. I can’t remember how much it cost (killin’ it with this review 😂), but from the research I’ve done, it sounds like most places charge between $40 and $100 for it, depending on location and whether you go with the one-step or three-step process.

In short, I was astounded by the results. I walked into the salon with brittle, dry hair and frizzy hair… and when I walked out, my hair felt like it did in middle school. The softness was unreal! It honestly felt like Emma’s hair. Stronger than ever, full of life, and so much smoother. My mom was visiting (and babysitting Emma) at the time, and she seriously gasped when I walked in the door.

About a month later, I started feeling like I needed it again, though. I wouldn’t say that my hair returned to straw; it just didn’t feel like pure silk anymore. So I bought Olaplex 3 (available via Sephora/Nordstrom/Amazon).

My stylist recommended I use Olaplex 3 (the one-step process) between one and three times per week at home. She explained that all I needed to do was simply apply the stuff to damp hair, put it in a bun, and let it sit. I could get great results in only 10 minutes, but she told me the longer, the better.

Of course, I’m a complete psychopath, and decided to use it every single day for 12 hours for a week straight because I really took that “the longer, the better” sentiment to heart. How did I pull that off? I applied it to damp hair around 7 p.m. every night, and washed it out the following morning. And yes. I realize I’m outing myself for having the least interesting social calendar in the world, but… you know. ;)

The result? That same, silky sooth hair I achieved from the three-step process! (Honestly, it felt silky after day 1 of Olaplex 3; I’m just a crazy person and kept going.) Truly incredible.

Are there risks with using Olaplex “too often”? Apparently no. Olaplex cannot damage your hair, no matter how often you use it. Some users have reported that when they use it for long periods, the amount of time it requires to “take effect” will climb and climb. I haven’t used it enough yet to say whether I’ve found validity with this claim, but I’ll be sure to report back. (Update: A few years later, I now use Olaplex once per week. I do not feel that this frequency makes it lose its effectiveness.)

How long does its effects last? I’m now about a month out, and I’m starting to feel like I need it again. I’ll probably just use the stuff once or twice a week, now that the weather is warming up and I’m out and about more. But a month is a long time, in my opinion!

Can I use it if I’ve never dyed my hair? Yes! Even “virgin” hair will benefit from Olaplex, as there are tons of factors–environmental, for example–that can cause damage. Were you born with dry hair? Frizzy hair? Fine hair? Olaplex helps with all of that.

How much is in the bottle? There are 3.3 ounces in the $28 at-home Olaplex 3 bottle. Doesn’t seem like a lot, but I’ve used it only seven times and half the bottle remains. I also really slathered it on. I’d say a single bottle will last several months, especially if you’re only doing it one, two or three times per week. It’s definitely worth it. :) The three-step kit’s bottles are MUCH larger, btw, but the price tag is considerably steeper.

What other products do you use? I love Pantene’s “Rescue” line. In my opinion, it’s just as powerful as Olaplex is. It’s also insanely affordable and can be found at any drugstore, too. And then I use OGX Coconut Oil–whatever version of it that I can find. (I simply put a small amount in my hair after washing when damp.) I ask this below, but I’d LOVE to know about any miracle products out there that you guys use. (Please scroll down to the bottom of this post to see my 2-3 years later update for more info on what I do/use now!)

What’s next for me

My grand plan is to grow out my highlights and be done with them once and for all. I’m getting frequent trims and haircuts, and with any hope, I’ll have “untouched” new hair in a few years. That said, I now realize that I’m going gray, haha, and I’ll likely have to do something about that eventually. When I color, though, I will lowlight only… and I’ll probably do it only once or twice a year.

Go shorter. Again, I long for long hair. (See what I did there?) In reality, though, my hair looks stringy when it’s long–at least in its current state. (Back in the day, it was good!) Maybe down the line, I’ll be able to have longer locks, but for now, I think I might need to cut it to my shoulder so I have more body. Starting to feel good about that decision; might even do it today, haha!

Start taking vitamins. I did start taking biotin after I had Emma, but I stopped when I learned that in can cause flare ups in people who are prone to cystic acne. (In truth, biotin can destroy Vitamin B5, and its absence is the real cause of the acne. But because my skin’s been good for a while now, I didn’t want to risk it and try biotin!) That said, I know there are a lot of other vitamins out there–even multi-vitamins, for example!–that will help with hair growth, so I’d like to start taking one. I’ll probably go with Vitamin B5 since it’s known to be amazing for both hair growth and skin. Any other recommendations?!

Lean less and less on thermal styling. I’m very proud of myself for giving up my flat iron, but I’d love to give up the rest of my thermal styling tools! That said, air-dried hair really isn’t a great look for me when I’m going out. I just ordered this styling treatment by Living Proof (reportedly great for air drying hair), but I’d LOVE to know about any miracle products out there. My dream life entails getting out of the shower, applying something that takes no more than 30 seconds, scrunching my hair, and being done. (Does that exist?!) Again, I have very fine and thin hair, and it dries wavy or curly depending on the humidity. And not in a pretty way, haha. :)

Edit: Embrace grace. Hair is so not important; I just need to remind myself of that more often, and focus on what actually matters. 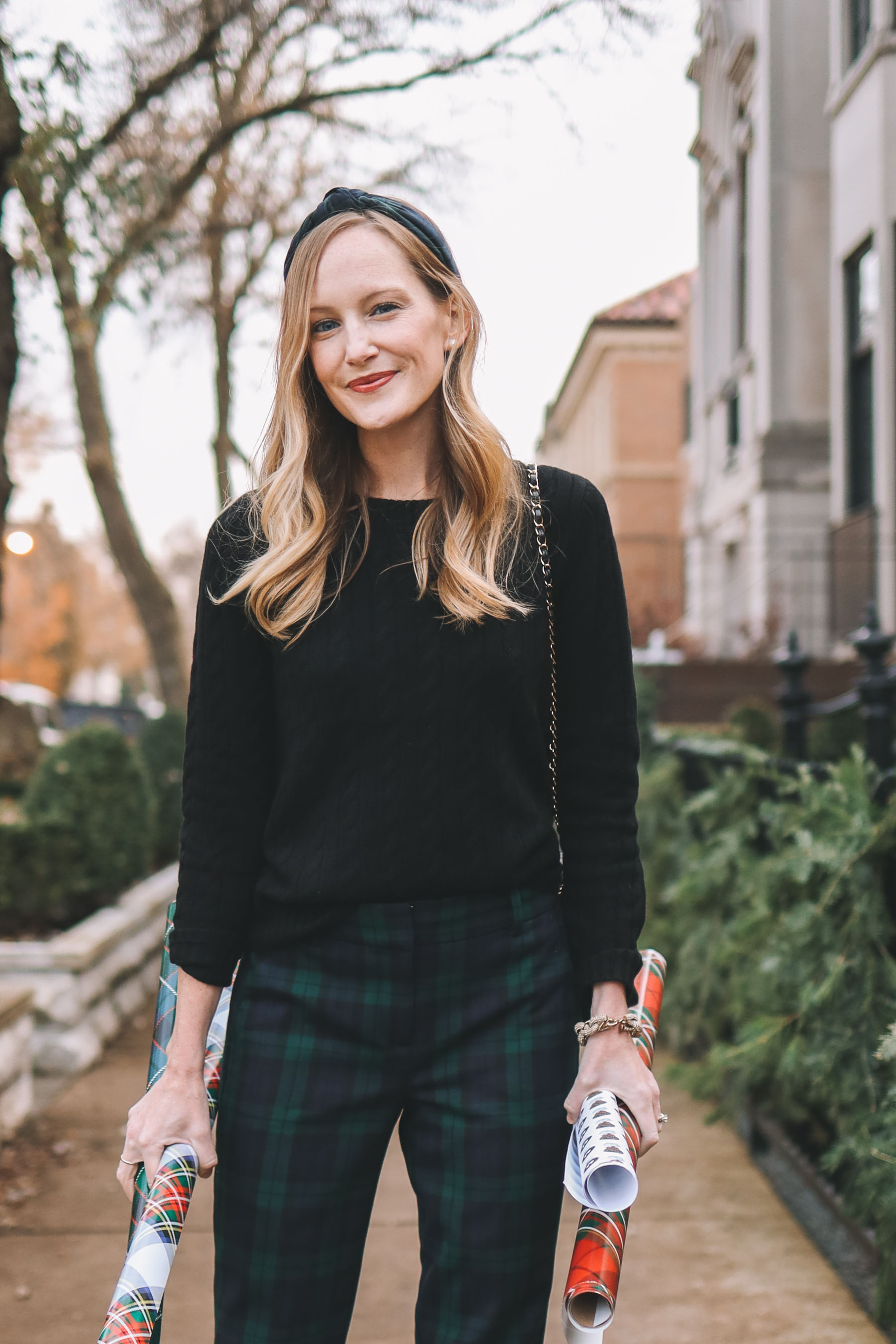 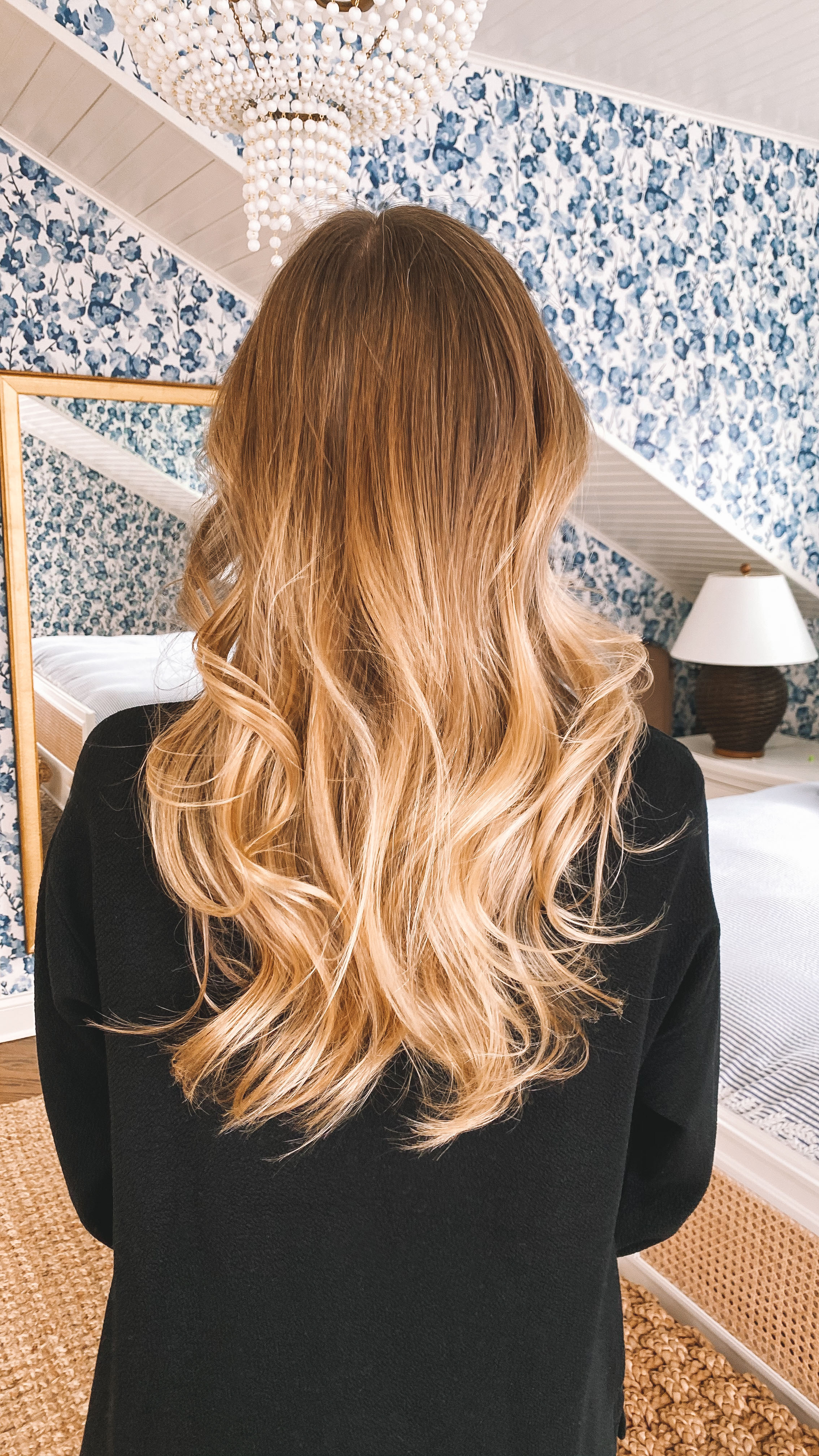 Hey, guys! I’m popping back into this blog post to give you guys a little update. It’s been nearly three years since I wrote this post, and since I started on my restoration journey, my hair has doubled in volume! I’m unbelievably happy with the improvement. The difference is honestly insane, as evidenced in the above photos. I recently cut my hair up to my shoulders, too, which has given it even more body and bounce!

Anyway, here are the…

Top 6 Things That Restored My Brittle, Dry and Over-Processed Hair

Many thanks, and I hope this review helped! 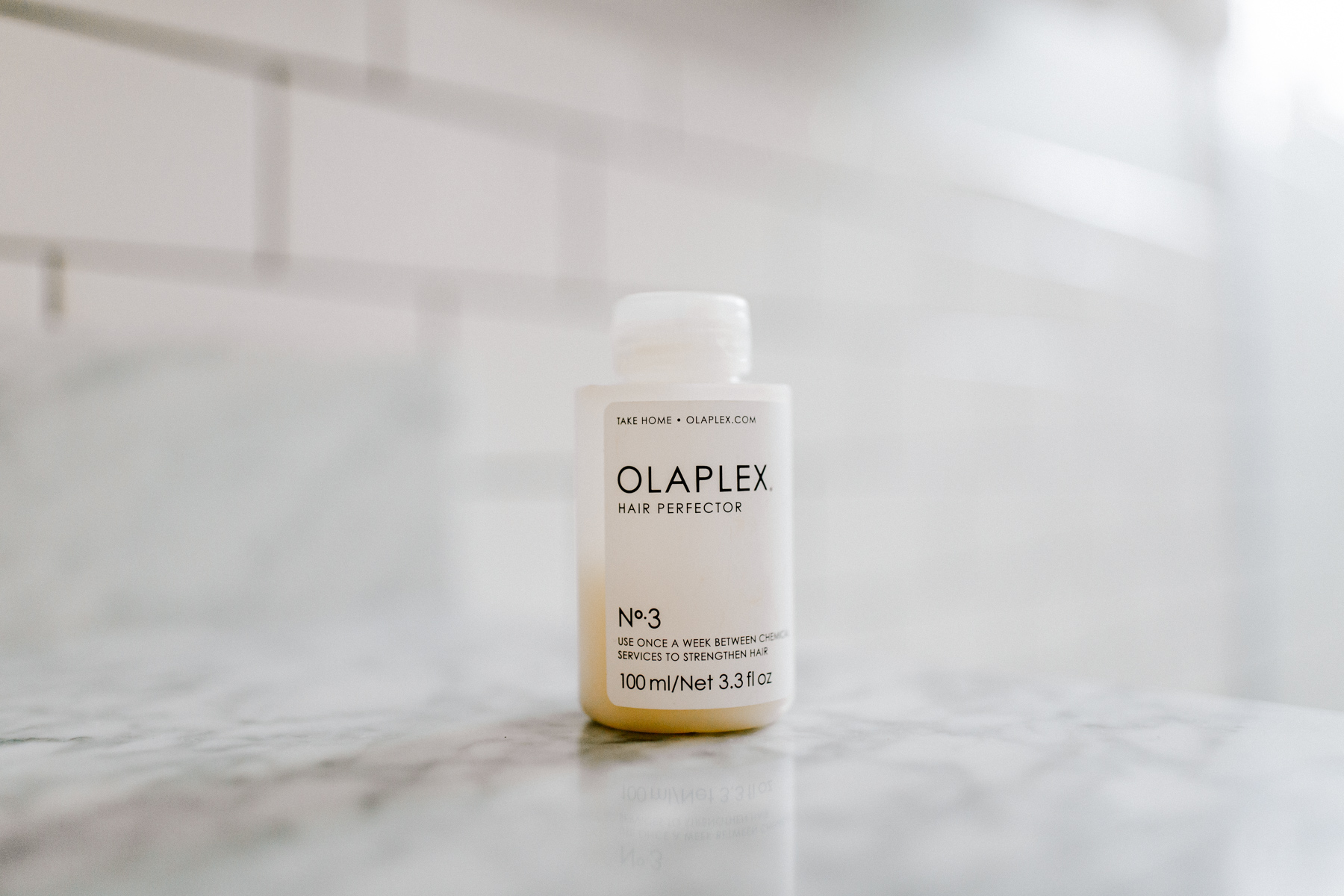 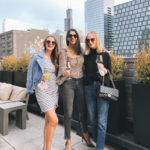