It took me a while to decide what to say on the blog after hearing of Kate Spade’s passing. While I typically shy away from talking about current events here, I knew I wanted to post; I’ve loved the designer since I was young and she’s played a big role in the development of this site. It was, though, difficult to eloquently put it all into words. Of course, I’ve failed at the attempt and I’ll likely read this tomorrow and wish I’d said a thousand other things. Nevertheless, here it is.

First and foremost, it goes without saying that I’m devastated for Kate’s family and friends, to whom she undoubtedly meant the world. Kate played many roles: wife, mother, sibling, and friend, just to name a few. And from everything I’ve read, it’s clear that she was also a cheerleader and confidant for those she was close with. She brought people together; she believed in kindness; she worked to bring happiness to the lives of her family and friends. My heart breaks knowing that they’re experiencing such indescribable pain and grief. I know they’re in the thoughts and prayers of so many across the world right now.

Second, I’m in awe of how the public has responded to the loss of the iconic designer. The New York Times, in today’s article titled “Why Kate Spade Felt Like a Friend,” said that her death was followed by “growing discussion about the need to address mental health issues. There was acknowledgment of the fact that no matter how seemingly successful or sunny a surface can be, underneath it all, great pain can exist. There were intensely touching stories of personal experience and depression.”

Sharing one’s personal battles with mental illness is not an easy thing to do. However, I’ve watched dozens of my own friends and acquaintances open up in an effort to spread awareness and understanding; to remind those who are suffering privately and in solitude that they aren’t alone; to encourage them to seek help. (This whole post was really inspired by my online friend Riley Sheehey, over at Make Things Co. and @cestriley, who gracefully and bravely shared her own story with her followers.)

I spoke briefly about my battle with depression a while ago here, but I didn’t do a great job with it, and I’m ashamed to admit that I’ve had a longer post about it in my “drafts” folder for almost a year now. I keep chickening out whenever I’m about to hit the publish button. But in short, I too have been in some very dark places at various times in my life and have leaned on my friends, family and doctors to help me through. And while I mostly portray that “sunny surface” online (because, in truth, it’s helpful for me), depression is very much something I fight within myself on a daily basis. So I vow to hit publish on that longer post, and I hope it (and this) serves as a reminder that you are not alone.

Finally, I’m grateful to Kate Spade for bringing happiness to so many over the years. Yes, Kate Spade is a brand, and yes, the brand sells material goods. But the messages behind it all have had an amazingly positive impact on impressionable girls, and that’s something wonderful.

One of my favorite Kate Spade quotes is “live in such a way that if someone speaks badly of you, no one would believe it.” Be and do good. Spread happiness, hope and encouragement. And if all becomes too much, reach out for help. ❤ 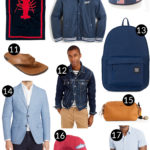