As Father’s Day is just around the corner (June 17th!), we thought we’d highlight some of Mitch’s gift picks today. :)

These are some faves:

I’m hyper aware of my gradual decent into the land of Dad Outfits. As such, I’m reluctant to even suggest white tennis shoes as I feel it could put me over the edge. But I feel the call. I want these shoes. I also want a pair of baggy jeans and a fanny pack but I’m showing some self-restraint. Jesus.

It’s a good thing this tee has a pocket because your man will need a convenient spot to carry the accolades he receives for dressing so well.

Does anyone out there have tips on how to not look like a complete moron in shorts? Maybe this pair is the key?

If  laceless shoes exist, why do laced shoes still exist? I’ve had it with laces. Over!

As a 30-something, I appreciate any gift that will help me keep my pants up. As an added bonus this belt has Grateful Dead bears on it. (I think?)

I don’t want to go all Kanye on this gift guide, but this shirt is THE GREATEST SHIRT OF ALL TIME! I wrote about it in depth here.

The polo is apparently the most difficult of all shirts to do well, and Vineyard Vines has pulled it off here. After a few wears of this one, I threw all my other polos out. It was an emotional day.

This towel has a lobster on it.

I’d love to have been a fly on the wall for this phone call.

“Carhartt? This is J.Crew. You are cool now. Let’s make it happen.”

There are exactly two weekends when wearing an American flag belt is super cool. This is one of them. Embrace.

Without question, this jacket is too small on this guy. Right? I mean, it’s borderline ridiculous. Is it supposed to be that small? Like, is that the style? Clearly, if you’re interested in getting this thing, size UP.

Women get to have all the fun. I don’t think I could count all the purses, bags, clutches, crossbones and totes on this page alone. Guys get backpacks and that’s about it. Make sure yours has a good one.

It wouldn’t be a Mitch Gift Guide without a blazer recommendation, and this blazer is certainly a blazer. If you’re wondering But Mitch, what is a Blazer Guy to wear in the summer? The answer is most certainly a blazer with shorts!

I refuse to pay for checked luggage. So I place big importance on travel storage. As such, I searched high and low for the smallest top kit on the market. The problem is that my tiny Dopp kit is too small for a standard tooth brush. So I currently cut my toothbrush in half with a giant kitchen knife when I travel, and it’s sometimes confused by TSA as a weapon. I need a new Dopp kit.

I once caught a fish so big that I officially retired from catching fish shortly thereafter. I still put hooks in the water, I just don’t catch fish when I do it.

Seersucker really is one of the best words I’ve ever encountered. (Who came up with that?) It’s also one of the best shirt materials around. This could be my go-to summer shirt! Look out!

If I had a pair of navy shoes, there would be a good chance of me accidentally putting on an entirely navy outfit from head to toe, which my wife would LOVE. Also, no laces, which I love. ;)

Briefcases are weird little devices, aren’t they? What would one carry in a briefcase these days? Isn’t everything digital? I pretty much just throw whatever I need in the bottom of the stroller and hit the road, but I know not everyone is that fortunate, so here’s an option for the strollerless dude. Who probably went to bars and stuff this weekend.

As soon as I finish this post, my butt will be firmly planted in one of these chairs for the rest of the weekend. There is something so special about an Adirondack chair.

Your guy sits on his computer all day, this much is true. But if you have anything to do with it, he can carry said computer around in a cute little pouch.

I never learned to successfully roll up my sleeves. It is a major failing of mine. My sleeve rolls get all weird and bunchy. It seriously ruins my day and I end up asking Kelly to fix them. Soon, I’ll be asking Emma.

Placing a piece of clothing in a bag and jet propelling it across the country without wrinkling is no small task, but this thing will do it no questions asked. 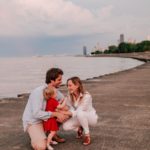