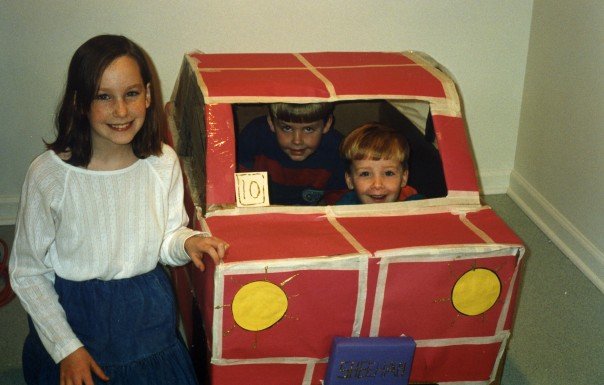 Couldn’t find very many relevant photos of me as a child for this post, as I write most of my blog posts last-minute and didn’t give my parents ANY time to look for ’em. ;) But here are three from my awkward middle school days! And yes, I made the above car out of a refrigerator box, complete with a parking pass for the train to NYC. One of the biggest accomplishments of my 13 years…

Last week, I launched a new series on the blog: Personal Essays. I did it for a few reasons. First, writing posts that are part of a series has proven to help me stay organized and have fewer late-night blogging sessions. (Oh, I haven’t yet written a post for the ____ series this week. Perfect! Let’s get started on that…) Second, I want to write more deeply on the blog, and these “personal essays” hold me accountable for that. (Being a well-rounded blogger has always been a struggle because I so often fail to see the bigger picture. This helps, though.) Third, writing in longer form is cathartic for me. (Yes, I’m aware of how dorky that probably sounds. But I love writing, and I’ve always used it as a way to peel away from the chaos of everyday life!)

Today’s topic is a bit more lighthearted than last week’s, but I’m thinkin’ that’s a good thing. No need to start the weekend off on a sour note, right?!

Today I’m talking about a few dreams I had as a kid, and how, if at all, they transpired later in life. :) I should, however, preface this with the fact that I was an obsessive kid. Like, if I was into collecting lizards stuffed with sand, I was really into collecting lizards stuffed with sand. Truth: I probably had 45 of them, all purchased with hard-earned money from chores and odd jobs, and all lined up in rows on my shelves. (I wish I had photographic evidence of these little guys, but alas. Still a few rogue lizards laying around my childhood bedroom, though. I’ll be sure to Insta Story them the next time I’m home, haha.)

Again, a totally irrelevant photo. But here I am with my first dog, Patch. And there Patch is to the right as a puppy, so you can actually see his face. ;)

It all started with my aunts. They were gymnasts, and I loved their stories. And then I found this book about Olga Korbut in my elementary school library, and I fell in love with everything about gymnastics. My dad even built me a balance beam and set up a trampoline in the backyard so I could practice at home. I distinctly remember watching the 1996 Olympic Games on vacation in Ocean City and ugly crying as the Magnificent Seven were awarded their gold medals. I saved every newspaper clipping and pasted it into my scrapbook; I attended the “Tour of Champions” after the Games ended. (Where I met Dominique Moceanu and Shannon Miller, and got Shannon Miller’s autograph! Almost died of happiness.) In short, I was obsessed.

It didn’t, haha. I wasn’t any good, and I only really liked the floor exercise and playing on the Tumble Trak and trampoline. I remember at one point, after learning how to do a “kip” on the bars, being like, “…and that’s that.” (Side note: how adorable are those British girls?! The cutest!) Just wasn’t into it, and yikes: there was no freakin’ way I was agreeing to do what came next. I mean, why was no one else concerned about the fact that we could DIE doing that stuff?!

(I suppose the one cool thing that came from it is I can still do a back handspring and back flip on the trampoline, which, at my age… is kind of something? Or maybe not, considering it’s the only athletic thing I can do at this point, and it’s not like I currently have a trampoline in my backyard. Lord help me at yoga this weekend with my friends. Should be pretty hilarious! But oh my gosh: Did I ever tell you the time Mitch jumped THROUGH my childhood trampoline? My dad high-fived him, but I was devastated.)

There was a silver lining to my non-existent gymnastics story, though. My three cousins–Mackenzie, Brenna and Olivia–became superstar gymnasts, and they competed for years and years and years, which was so much fun. I loved following along with their careers, and loved watching and rooting for them. Olivia is actually still competing! She’s the captain of the William & Mary gymnastics team this year, and she’s incredible. You can watch her here. I KNOW! Insane! My sister-in-law, Kim, was also a superstar gymnast back in the day, so it’s really nice to be able to freak out over competitions together. ;)

Oh! And this is really cute: Mitch is super into technology, and he has our television set up to record every single gymnastics program that’s aired. So THAT’S awesome. Emma also realized how important it was for me to be able to watch the 2016 Olympic Games; she arrived a week beforehand so I could watch them at home while recovering! Such a sweetie pie. ;) She wore this. Note the gymnasts. And how tiny she is!

Okay, really I should say that I just wanted to be Little Orphan Annie. Again, obsessed with that musical, and my childhood best friend and I must have put on a zillion “shows” of our own for our poor parents and neighbors. I’d spend hours in my basement trying to sound just like Andrea McArdle… or Aileen Quinn, who, coincidentally, is from Yardley, where my parents moved us when I was in high school. (Part of the reason I didn’t put up a fight when they told me we were moving.) Guys, I was Little Orphan Annie for Halloween one year. I wore a clown wig, because where else do you get a curly red wig?

Not at ALL. While I briefly took some acting and singing classes for a couple of summers, I was much too shy and nervous to actually speak up or sing. I did get to be Annie during a talent show once, and I almost sang “Tomorrow” during an audition in middle school… but then completely chickened out and sang “Do Re Mi” very softly instead. I’m sure you can imagine how that turned out. Ended up being cast as a munchkin in the Wizard of Oz, haha. Later in life, though, I got pretty into country music, and I learned how to (poorly) play a bit of guitar. I still play from time to time, and Emma and I have such a blast with it. It makes me happy, even though I’m not very good. ;)

I vividly remember the day when I realized I loved the written word. I was in the first grade, living on Long Island, attending Saint Agnes. The library had just received “Samantha Saves the Day,” and I couldn’t get over how incredible the author, Valerie Tripp, was. Every word spoke to me, and I had to have that book. So I sat down with it and proceeded to copy as many pages as I could. I got to page five, became overwhelmed, and started crying. The teacher had to hug me to stop my tears. It was really embarrassing.

In the years that followed, I created my own printing press in my basement. Instead of copying already published books, though, I “published” my own, using composition notebooks, construction paper and a whole lot of Elmer’s Glue. Most of the books lacked endings, as I loved starting stories but found great difficulty in finishing them. But they were all lined up in a row on a shelf, just like those lizards. One day, I promised myself, I’d actually publish a novel.

While I never published a novel, I did end up working in the editorial field for a few years. In college, I was the news editor for Fairfield University’s student newspaper, and then I interned and semi-worked at the Hartford Courant. (One of the happiest days of my life was finding my story–about a woman who had a real stuffed elephant in her house–on the front page, albeit in the Sunday edition, of the paper. Literally cried. I’ll never forget that elephant.) After that, I was an online news editor for Nielsen, and then I taught eighth grade English in the New York City Department of Education for a few years. (They even let me teach journalism for a couple of semesters!) Now I do this weird blogging thing on the internet, but it’s low-key and it does allow me to write on a daily basis. Do I miss reporting? Yes, but it was a tough lifestyle to uphold. It’s also nice not having to report on murders on a daily basis. ;) Here at Kellyinthecity.com, things are a bit more lax, and no one really cares if my exhausted self makes a few mistakes or breaks out of AP Style. (Thanks, guys!) And we rarely talk or think about murder. (Though there was that Sophie incident…) Oh! And I can self-publish without Elmer’s Glue. 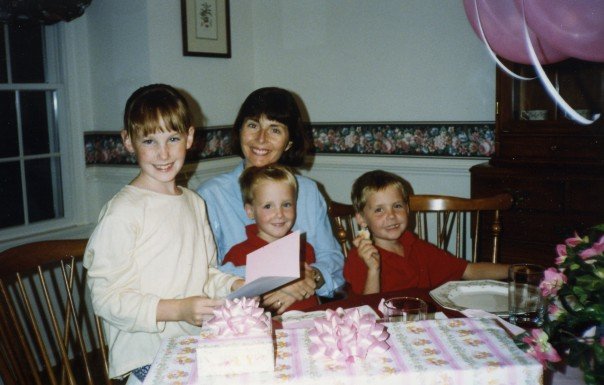 What were your childhood dreams? Tell me you collected lizards, too. 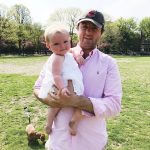 Previous Post:
My Top Three Most Surprising Things about Fatherhood