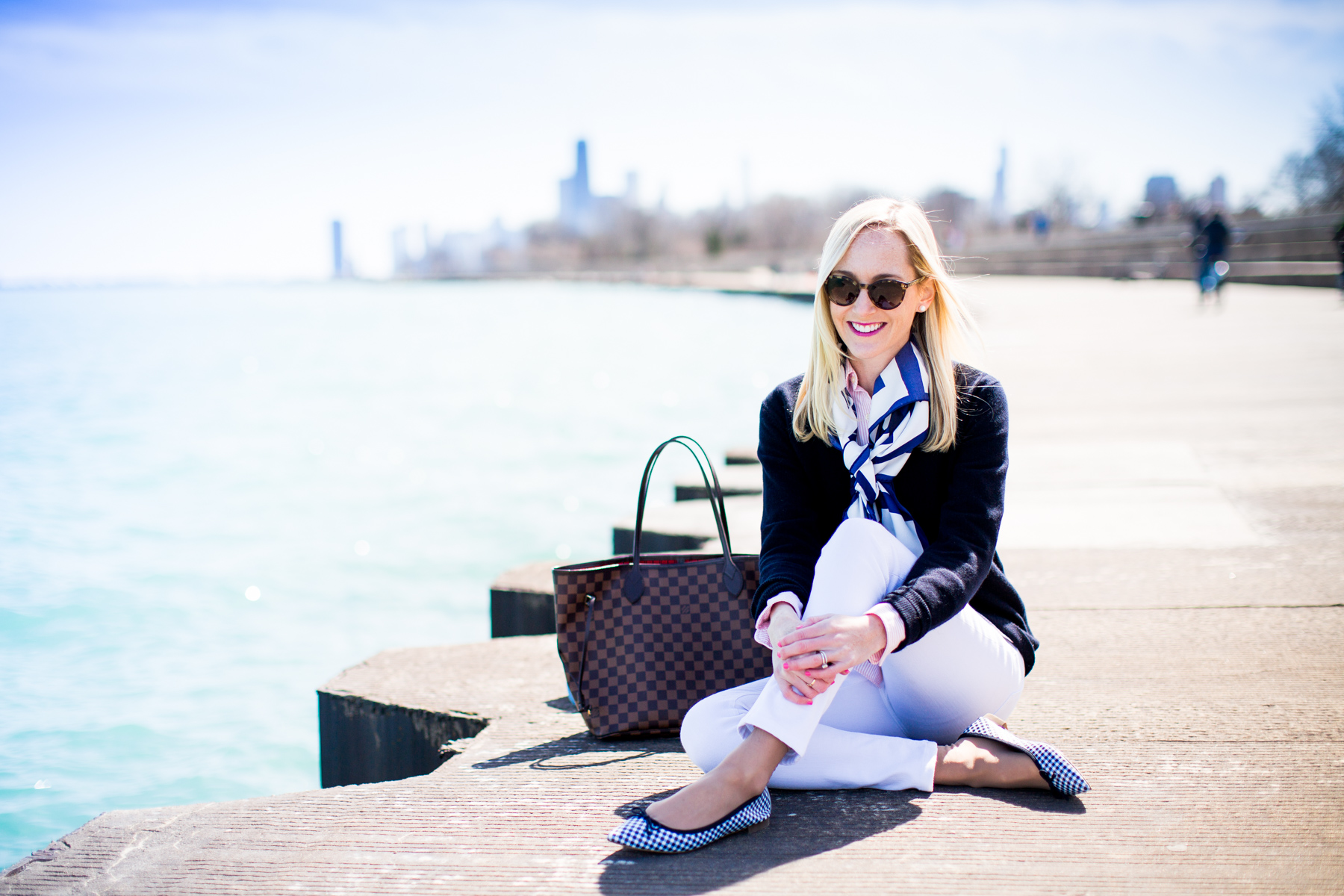 Talbots Gingham Flats (Similar here and here) / J.Crew Coat (Sold out, but how great is this light blue trench?) / Rag & Bone White Skinny Jeans (Favorite white skinny jeans. Also available on Shopbop.) / Gingham Scarf (On sale! And have you seen Banana’s full gingham collection?) / Everlane Cashmere Sweater c/o — Without a doubt, the softest cashmere I own! / Ralph Lauren Oxford (Also love this one, this one and this one.) / Louis Vuitton Neverfull MM Tote (But here’s my current tote obsession. It’s scalloped and super affordable!)

Last month, my brother and sister-in-law came to stay. (Why am I only getting around to posting about it now? Truth: lost the SD card with the photos on it, and found it last night in my makeup bag. Of course! Why didn’t I look there?!) As Patrick and Kim live in Philly and we live in Chicago, we unfortunately just don’t see each other as much as we’d like. So an entire weekend of quality time? Honestly, kind of unbelievable! And the absolute best.

But let’s back up, and start at the beginning. ;)

My relationship with Patrick has changed a lot over the years.

When we were children, he was pretty tough on me. There was the time he drew–in permanent marker–all over my American Girl doll’s mouth to make it seem that she’d “permanently thrown up.” Or the time he took a hammer to the abandoned bird eggs I’d been watching over to “see what was inside them.” Or the time he dug up my dead goldfish to “make sure it was still dead.” Or the time he…

You get the point. Brothers. Sheesh.

Later in life, though, Patrick and I actually became close. In high school, a lot of his friends’ siblings were my friends, and we found ourselves hanging out regularly. As it turned out, we liked the same music, we had similar senses of humor, and we shared a love for the Jersey Shore. (Which we had always known, but it played an instrumental role in the bond we formed.) Patrick and I visited each other at our respective colleges as the years went by, and we had the summers of our lives together on the beach. To my surprise, I found a best friend in the same boy who’d once received great joy from throwing Tonka trucks at my head. Unexpected, but also truly wonderful.

It’s been many, many years since we both lived under the same roof. Patrick is now an emergency room doctor in Philadelphia, and he and Kim are in the process of packing up and relocating to New Orleans for a few years. And here I am in Chicago, farther away than I’ve ever been.

Patrick and I are both busier than we’ve ever been, too. He’s juggling the last few months of his residency program on almost no sleep, and I’m trying to hack it as a stay-at-home mom and whatever it is we’re calling what I do. Clearly, his job is a lot more challenging, haha. But the idea is that we’re both short on time.

Yet despite all this, Patrick actually made the trip happen. With his crazy schedule and Kim finishing up her PA degree, I was absolutely astounded that they were able to find a weekend that worked and that they found the energy to make travel arrangements and that their sleep-deprived selves somehow got up at 3 a.m. to make their 7 a.m. flight. The second thing that got me was how wonderful the weekend was. I think it’s a really special thing when you can hang out with with anyone for three days straight, and at the end of it, truly wish they didn’t have to leave. We talked about life, we told stories, we talked about the future, and we laughed.

Coming away from the weekend, I was feeling half sad, half grateful. Sad because I’m so far. The best thing in the world happened to me this year–I had Emma!–and this makes me so badly want to be physically closer to my family so they, too, can watch her grow in person. The distance can be heartbreaking, and I think that’ll always make me upset, despite how much I love my life here in Chicago.

But I also felt grateful, because the weekend changed my perspective about that distance. Yes, I’m far. And I’ll likely always be far, as we have a great life here in Chicago. But I now really understand the importance of picking up the phone, booking that flight, and sending that text or email. It’s easy to not do these things; to be confused by my own life and my own busy-ness, and push family aside for later. But doing that is scary. Soon, “later” becomes “always,” and suddenly, I can’t remember the last time I talked to someone I love so dearly. Do you know what I mean? Sure, there’s physical distance. But then there’s emotional distance, which is even more concerning!

(Did you read this recent post? Same thing goes for friends.)

Having a baby has proven to be very helpful in this respect, though. Because of Emma, I’ve grown closer to my parents, siblings, grandparents, aunts and cousins… and I’m constantly chatting with them, whether via phone, text, email or FaceTime. (Thank you, Emma. You’ve given my life purpose and filled my world with indescribable love, and you’ve also given me the gift of family–both immediate and extended!)

After Patrick’s trip, I immediately booked flights home to the Jersey Shore for Memorial Day Weekend, despite how much I hate booking flights. (Anyone else put off doing it?! Why are they one price one minute and another price the next?! And are they at their cheapest now or will their prices drop tomorrow?! ARGH!) I also ate a lot of chocolate doughnuts because, like, I was missing my fam, and chocolate makes everything better.

So what did we do that weekend?! Because of Emma, we were super low key, but I think everyone was in need of that. :) Patrick, Kim, Emma and I went out to brunch when they arrived on Friday morning (Mitch was at work), and we walked around the neighborhood afterwards. We ordered deep dish Friday night as Emma’s bed time crept up on us, and then the boys went out with friends later. Saturday was spent at the lake (where these photos were taken) and at the zoo, and then we had the loveliest time at the J.Parker. It was definitely chilly, but it was one of those early spring days when you could actually take your coat off when you’d been in the sun for a while!

Gingham Flats: I can’t tell you how comfy these shoes are. Typically, ballet flats hurt my feet. They’re either too tight at the toes or they rub against my heels. But these are crazy soft and flexible, and I wore them ALL DAY without discomfort. The one thing I’ll say is that when I took them out of the box and tried them on for the first time, I felt like they were too big around the heel. But I decided to keep them anyway, since a good pair of gingham shoes are hard to find. ;) Throughout the day, I noticed that my heel never actually slipped out of them, and they felt just right. So order your normal size, and don’t worry if they feel a bit too loose in the beginning!

Rag & Bone White Skinny Jeans: They’re now available at Nordstrom! So much more convenient. I know I talk about them all the time, but they’re the best skinny jeans I’ve ever owned because they’re super soft, comfy and stretchy yet they hold their shape. I own two pairs because I wear white jeans so often!

Gingham Scarf: I’ve been getting so much wear out of this gingham scarf, whether I’m wearing it around my neck or tying it to a tote bag. (It’s almost permanently attached to this straw tote from Tuckernuck.) I also that it’s machine-washable, which makes life SO much easier with a baby! Also, have you seen Banana’s full gingham collection? I can’t get over it!

Everlane Cashmere Sweater: GUYS! Have you heard of Everlane? It’s a company that manufacturers its goods at the same factories where designer products are made, but reduces markups by only selling online and cutting out the middleman. On the site, Everlane even tells us that my favorite navy cashmere sweater, for example, cost the company $44 to make and ship. While the same sweater would normally retail for $220 in the United States, Everlane prices it at $120. I know: seems like a big markup, but 2.7x markup vs. 5x markup?! WAY better! Also, the sweater? Softest cashmere I own. Wish I had it in every color!

It’s coming up this weekend! My parents and my other brother, Danny, are staying through Monday, and I’m SO excited. We don’t really have any plans, except I did somehow manage to get reservations at Cindy’s! Any recommendations for fun downtown activities?! Would love your insight. :) And then we’re headed to the Jersey Shore for Memorial Day Weekend, which is now just around the corner! 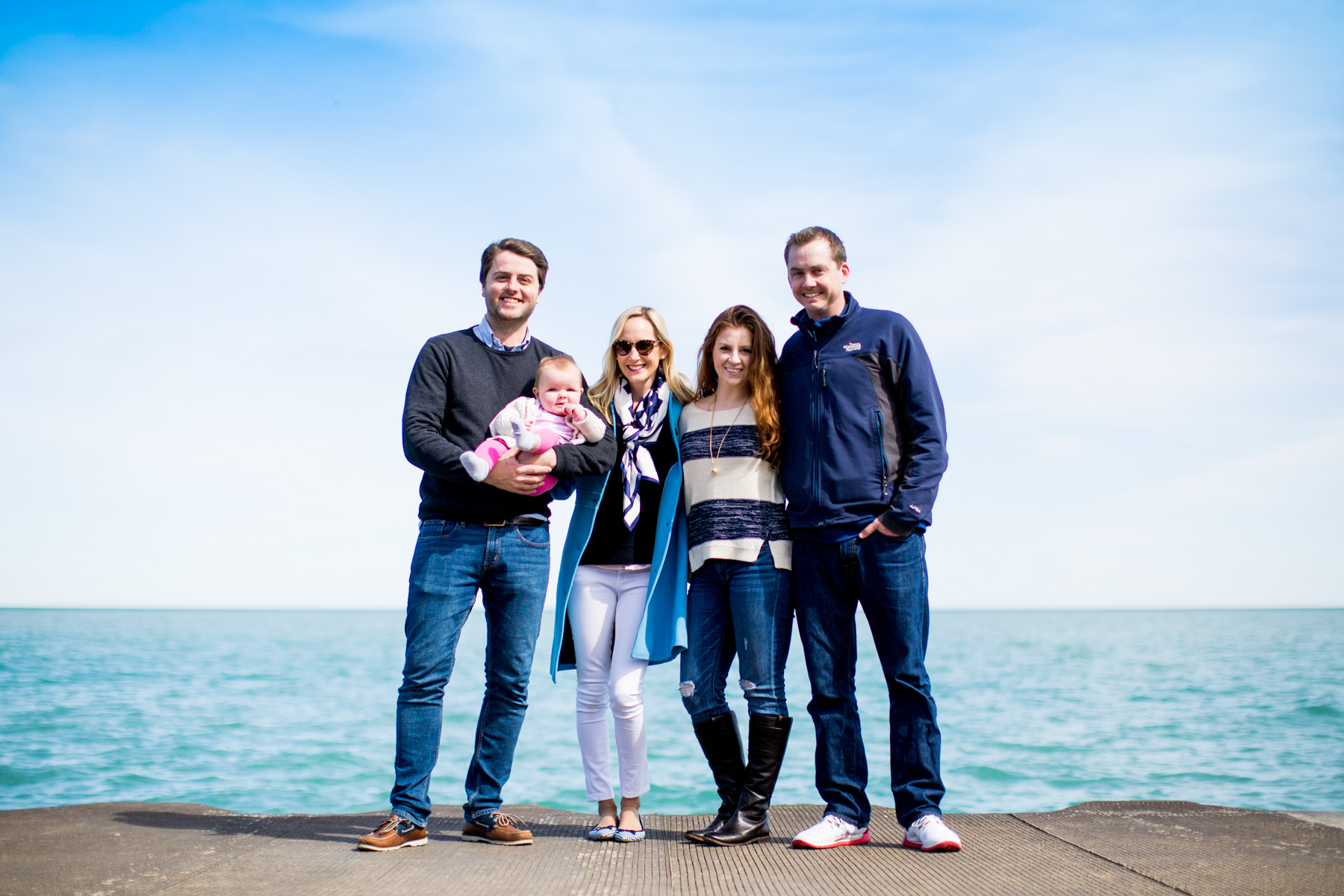 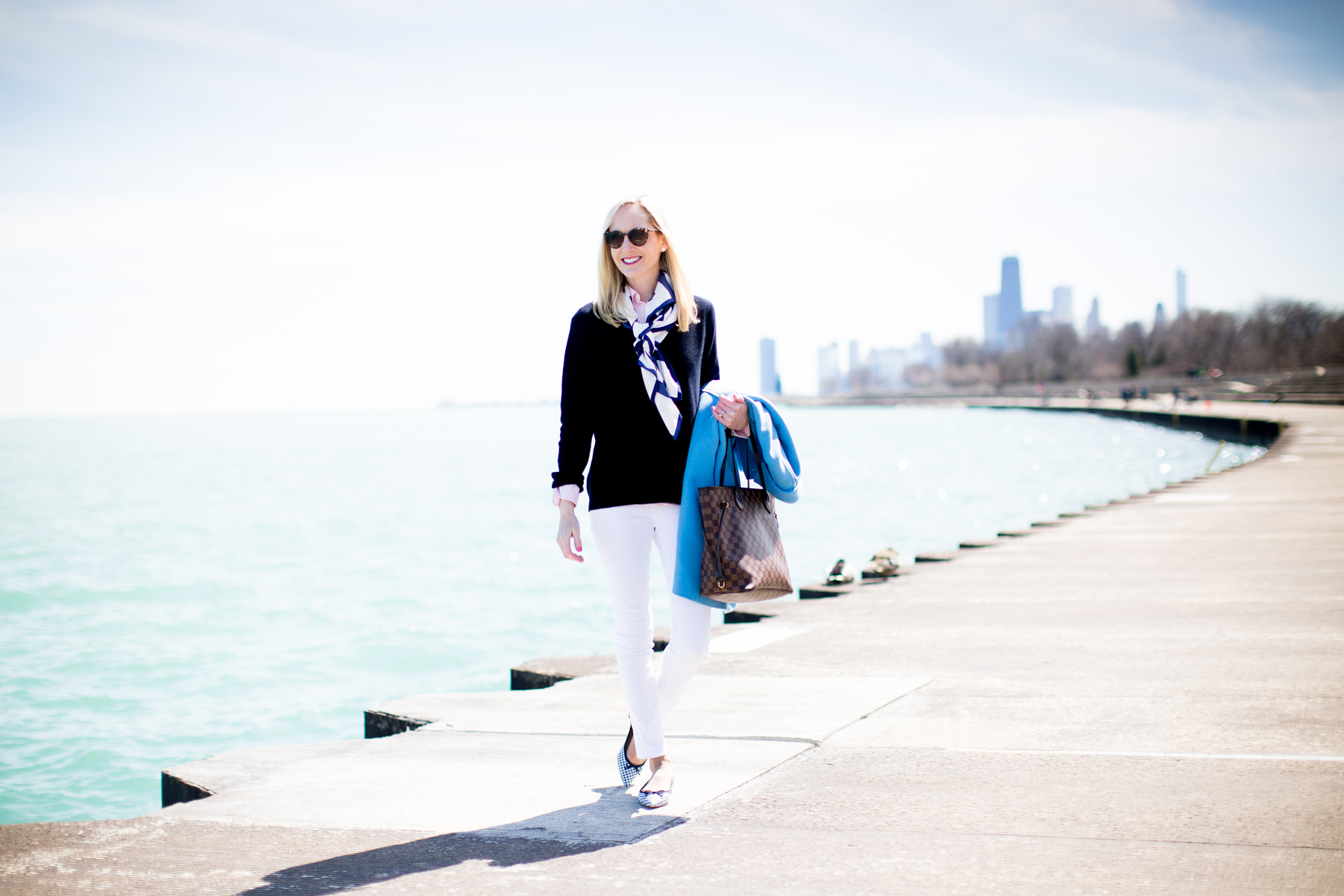 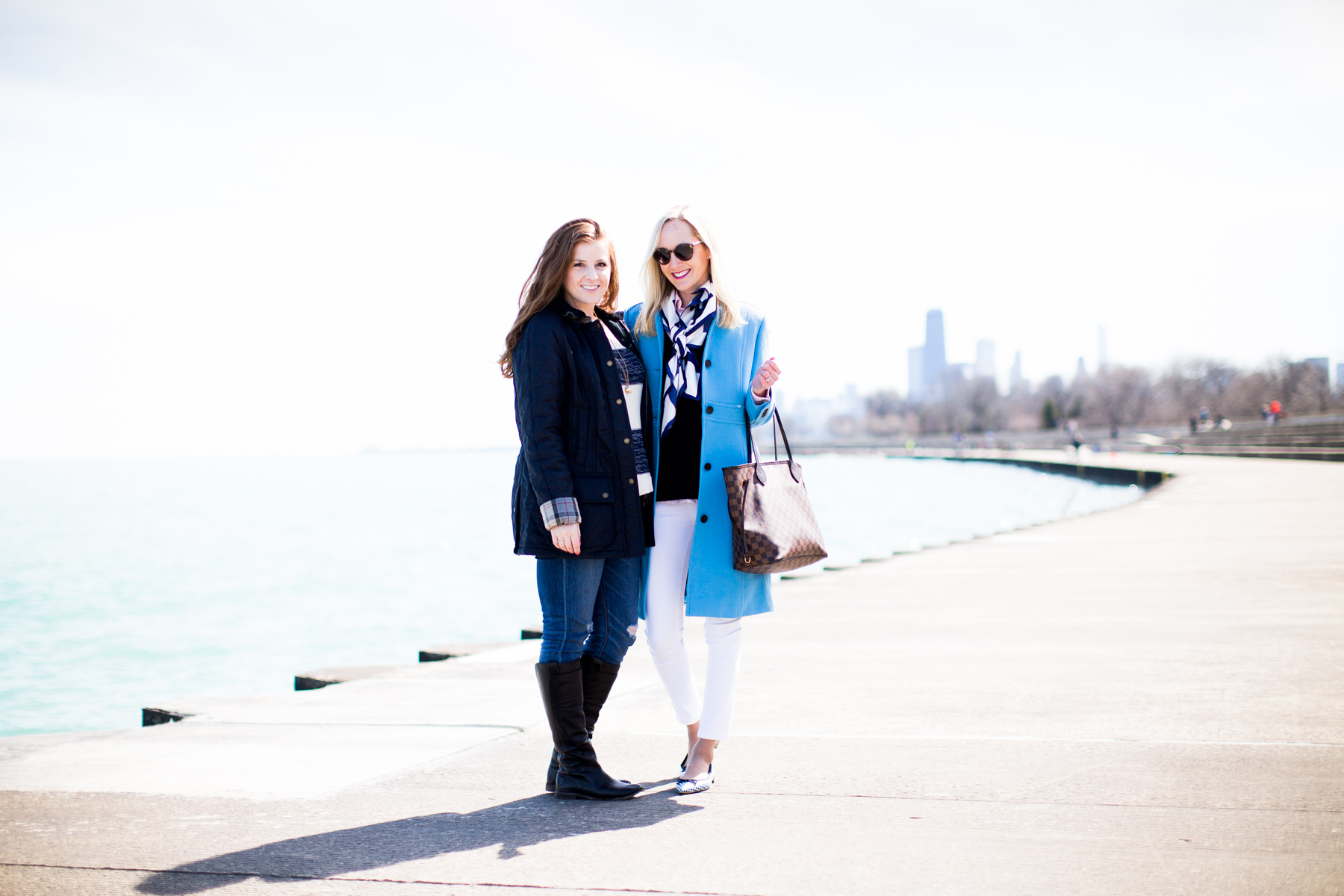 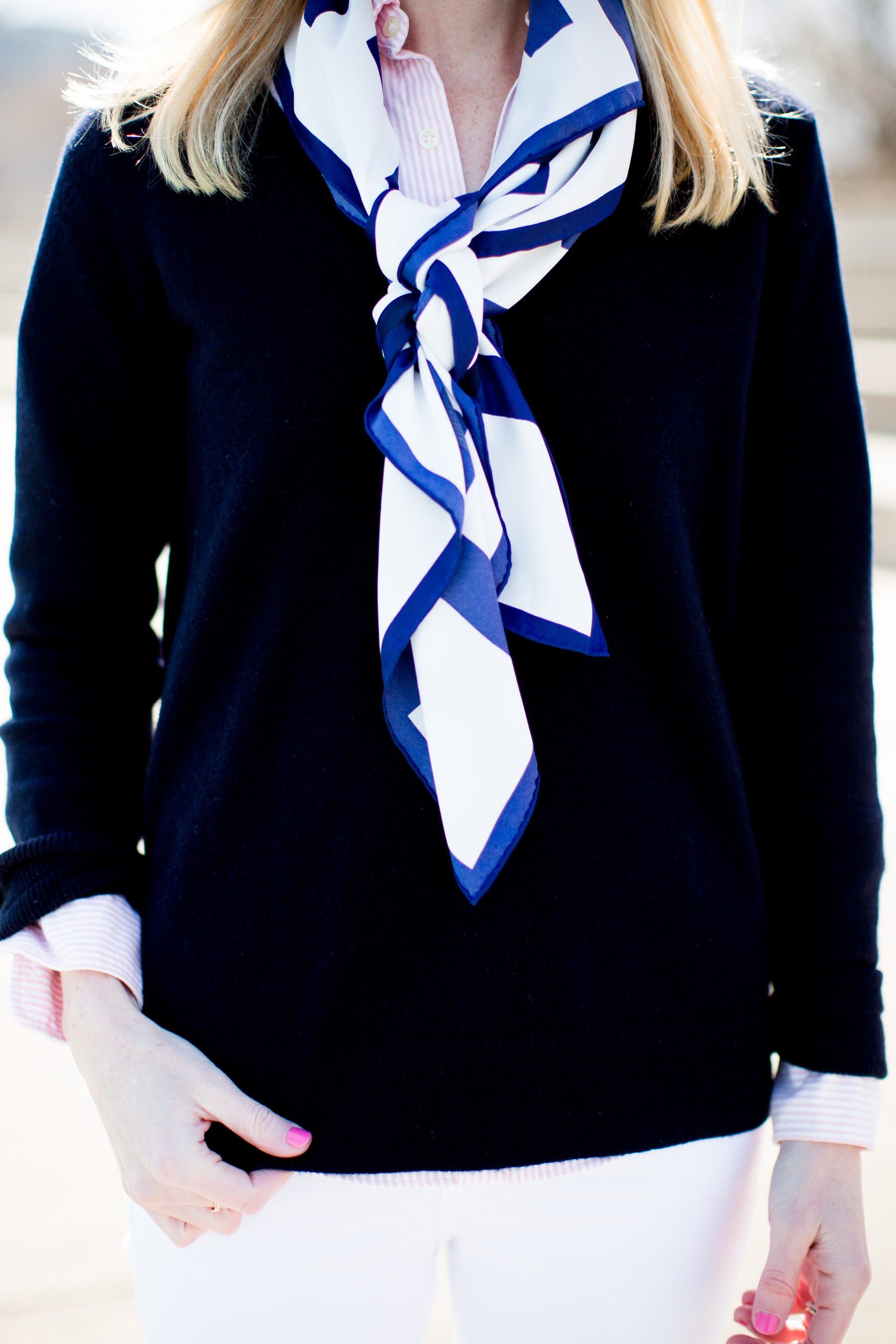 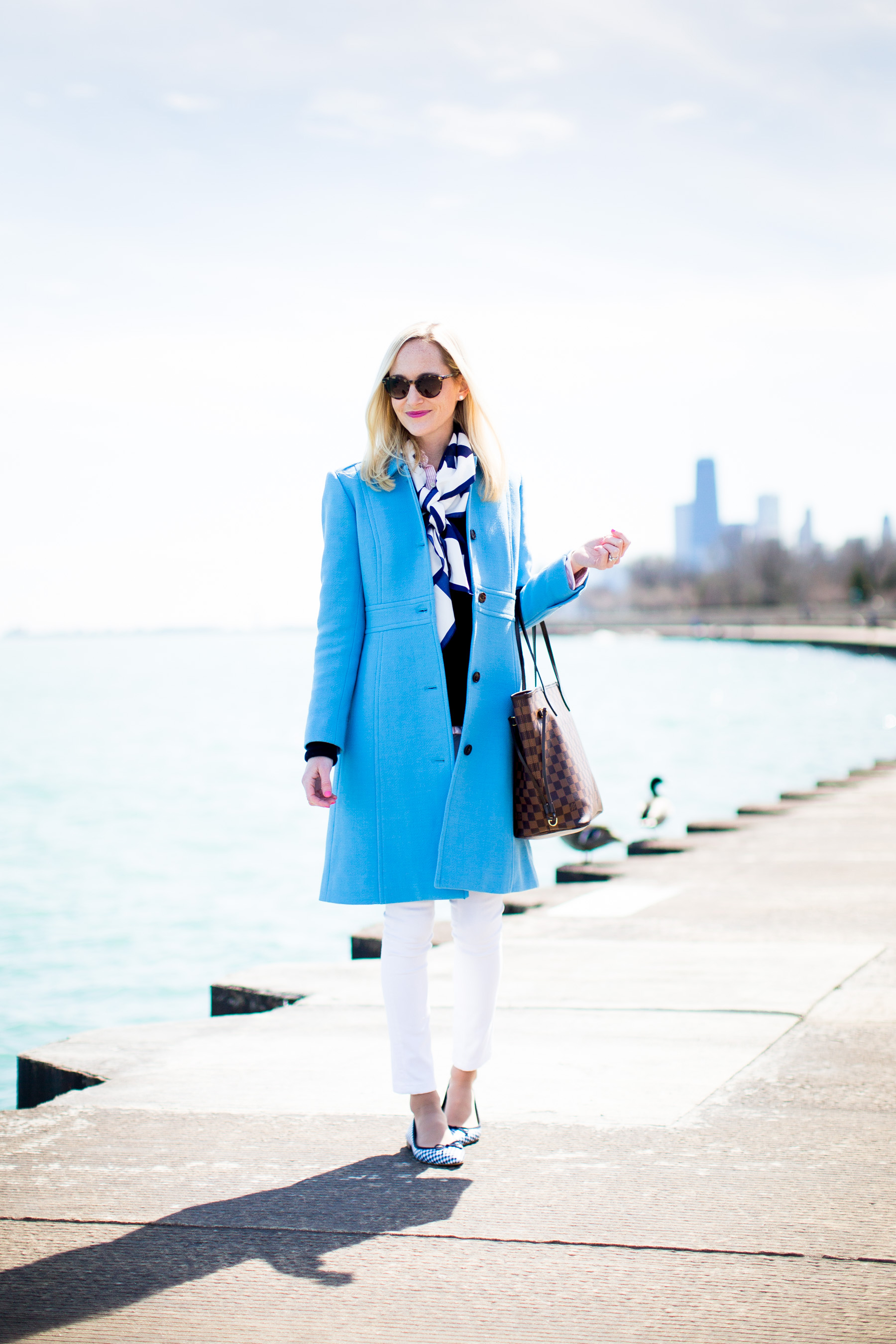 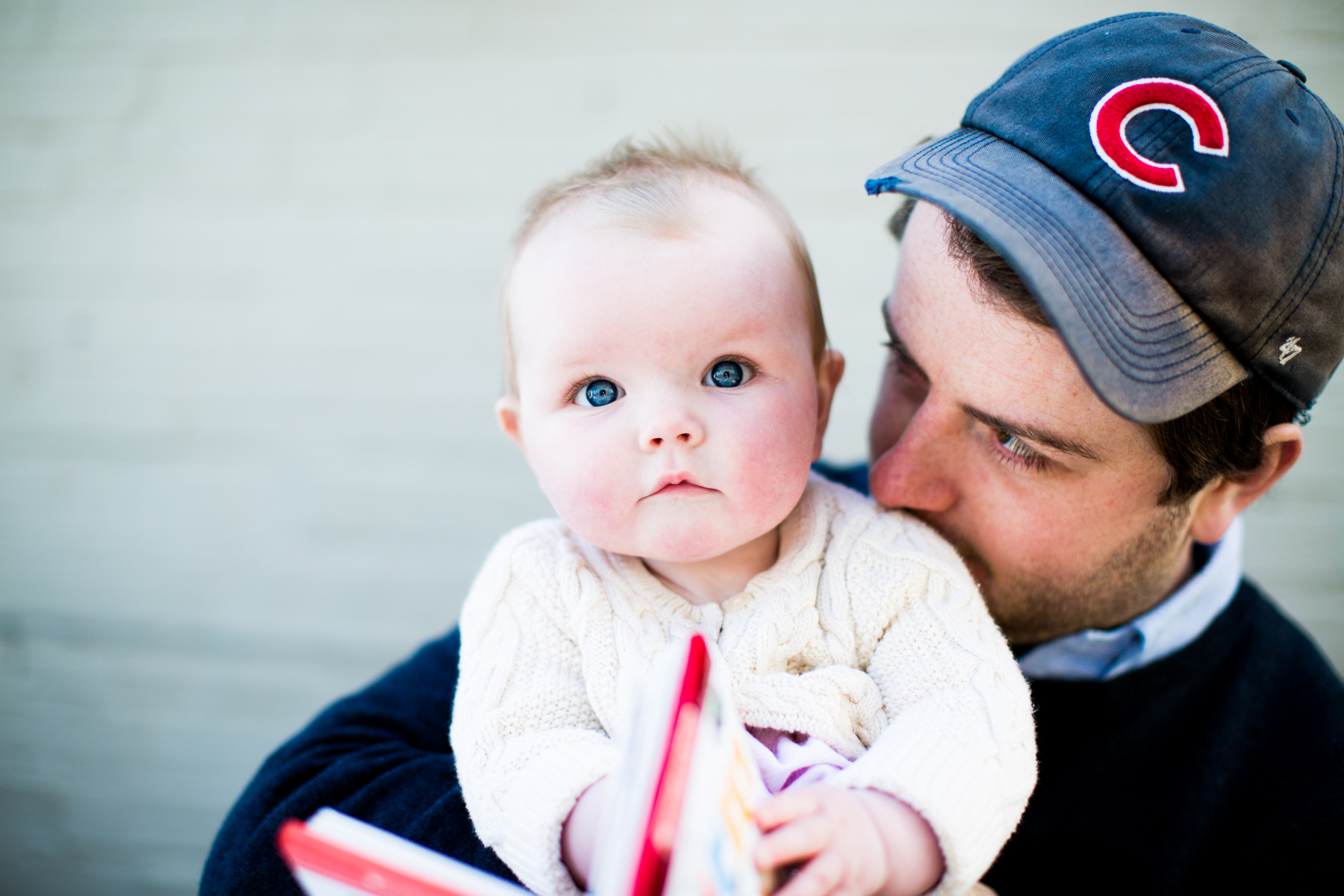 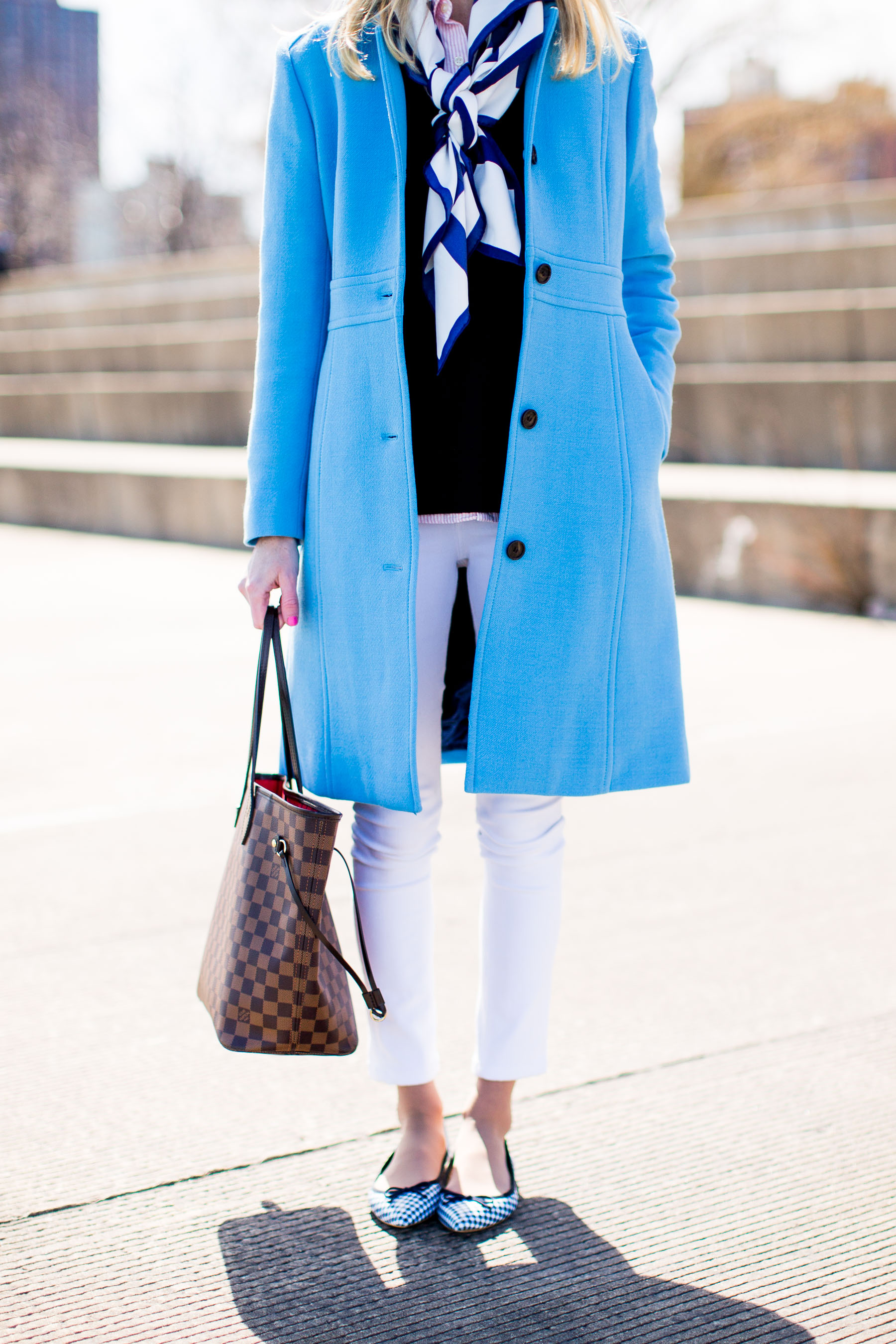 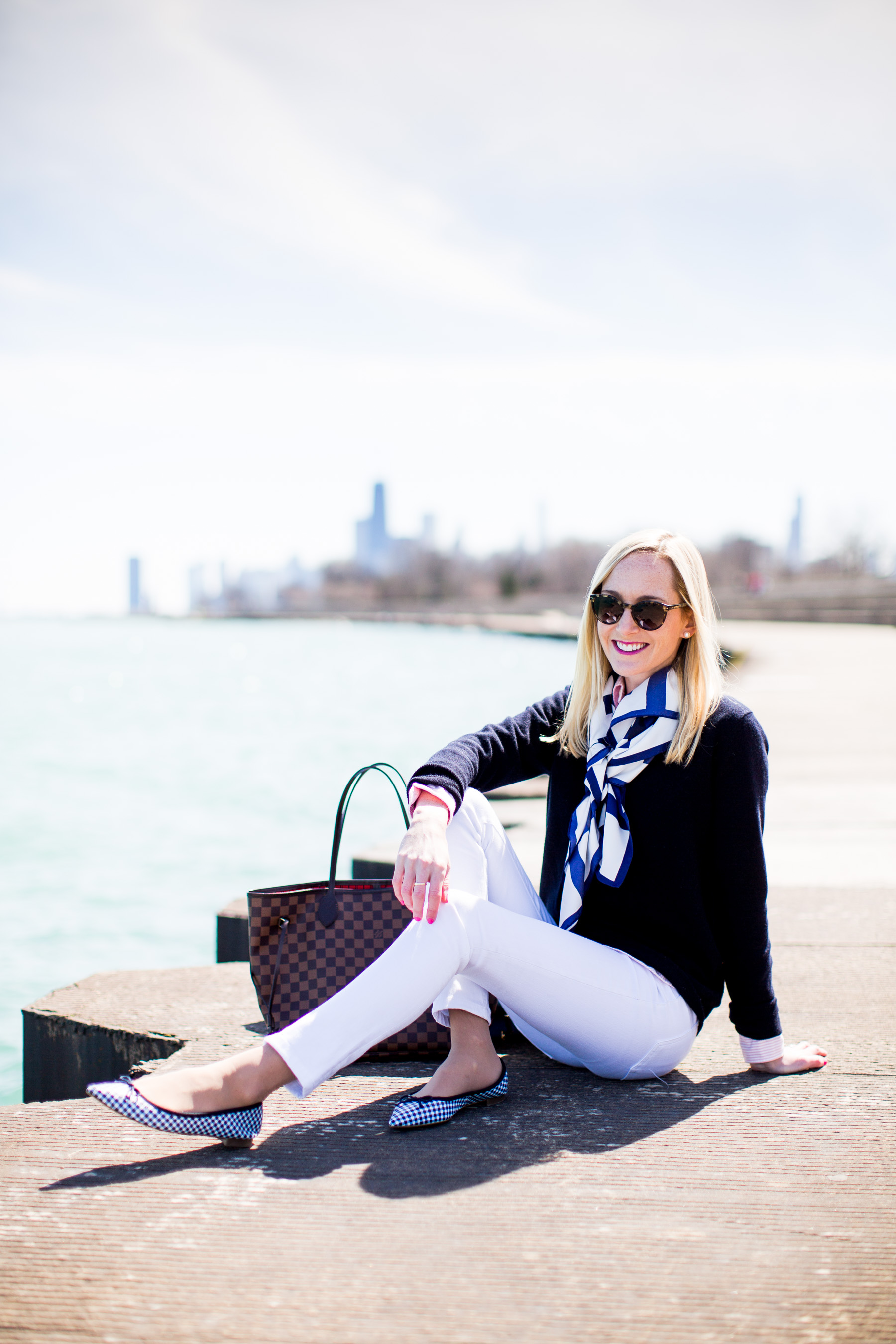 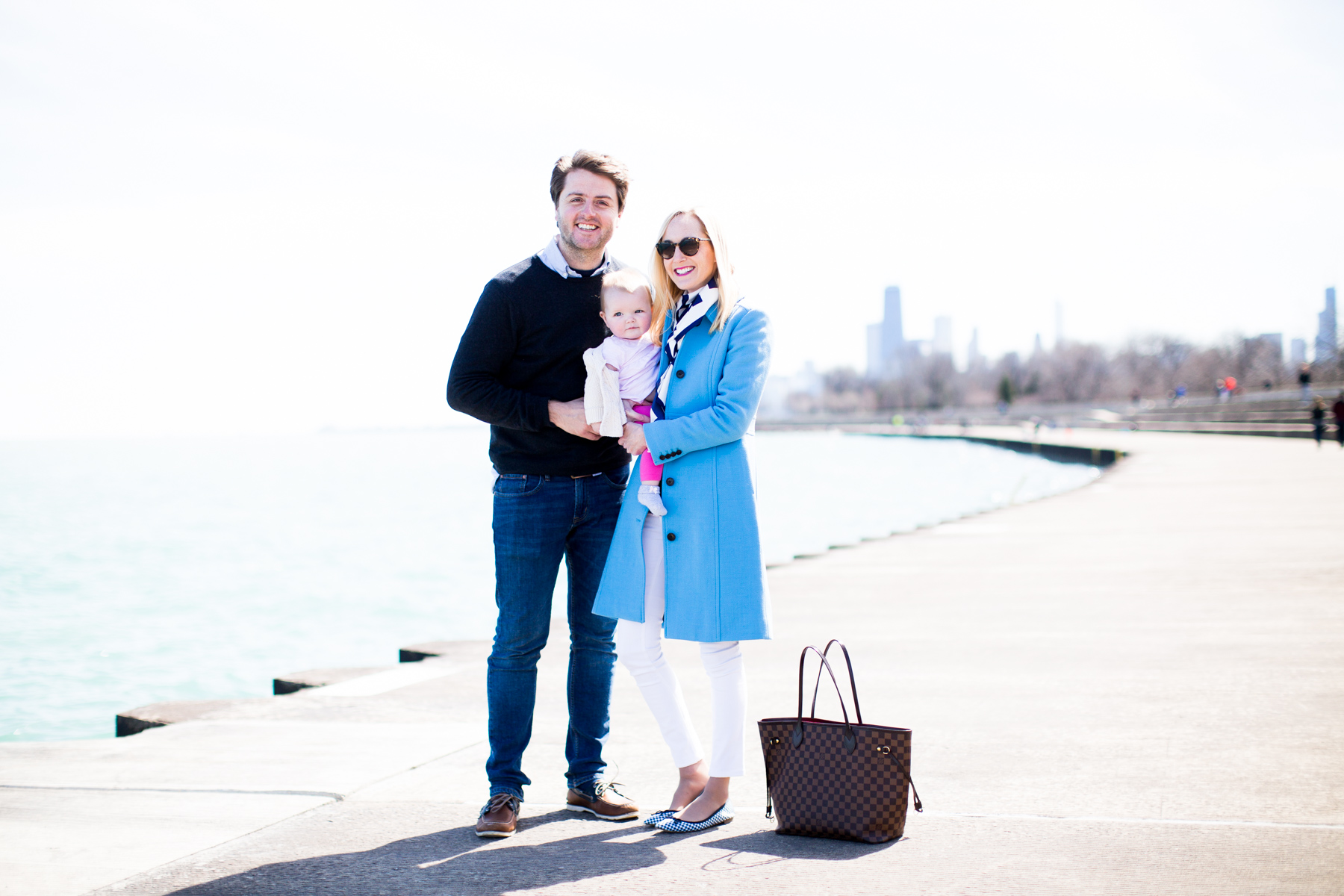 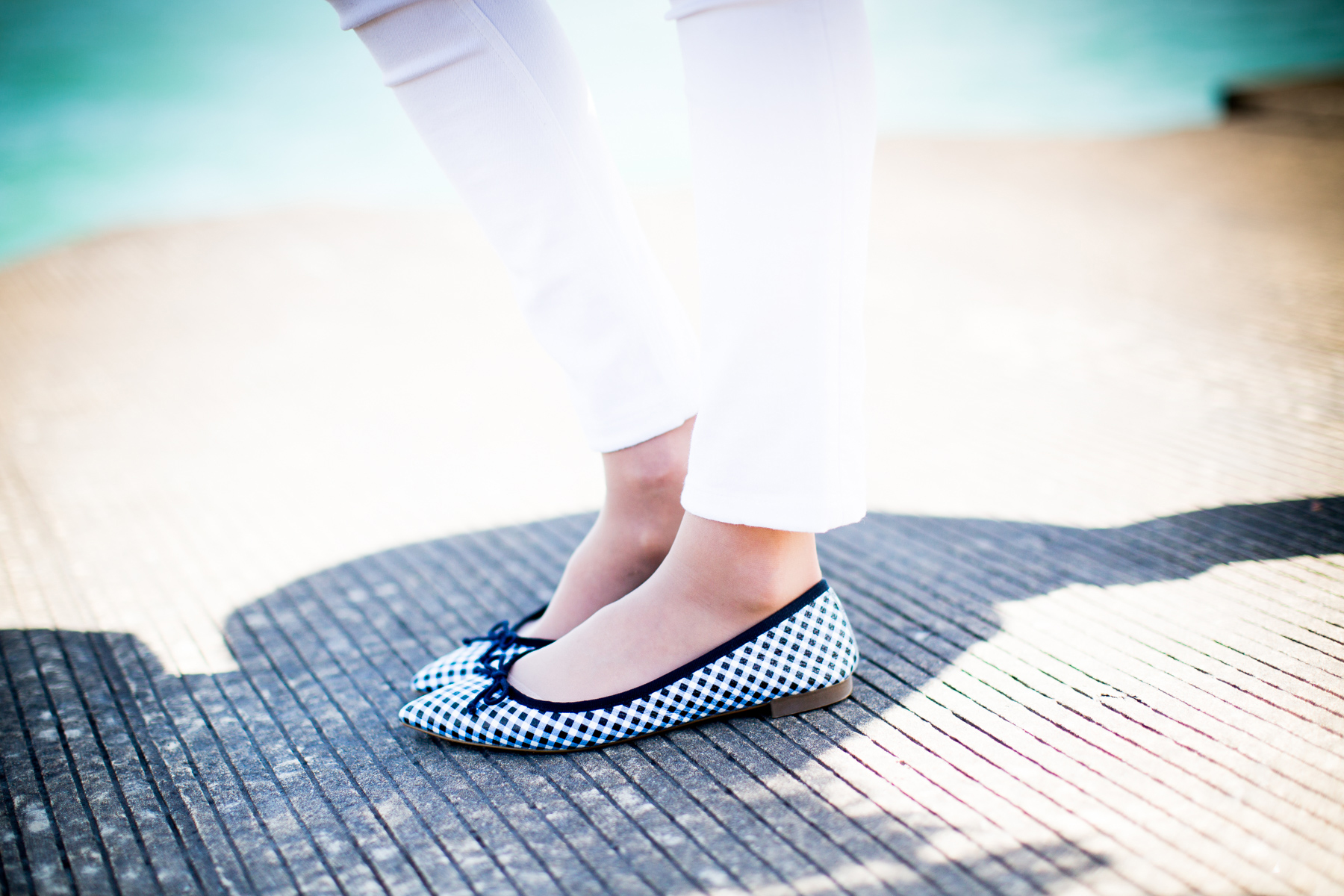 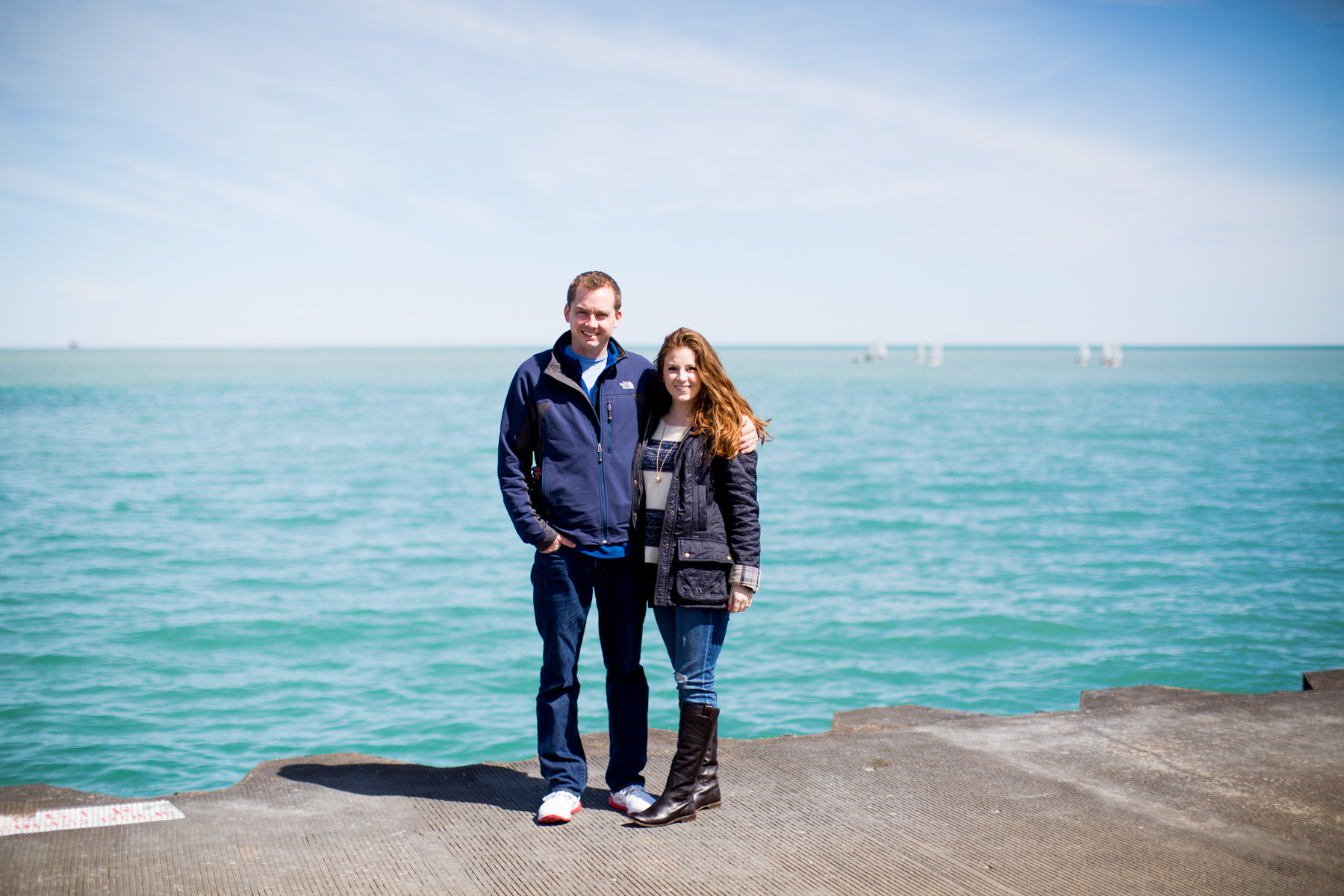 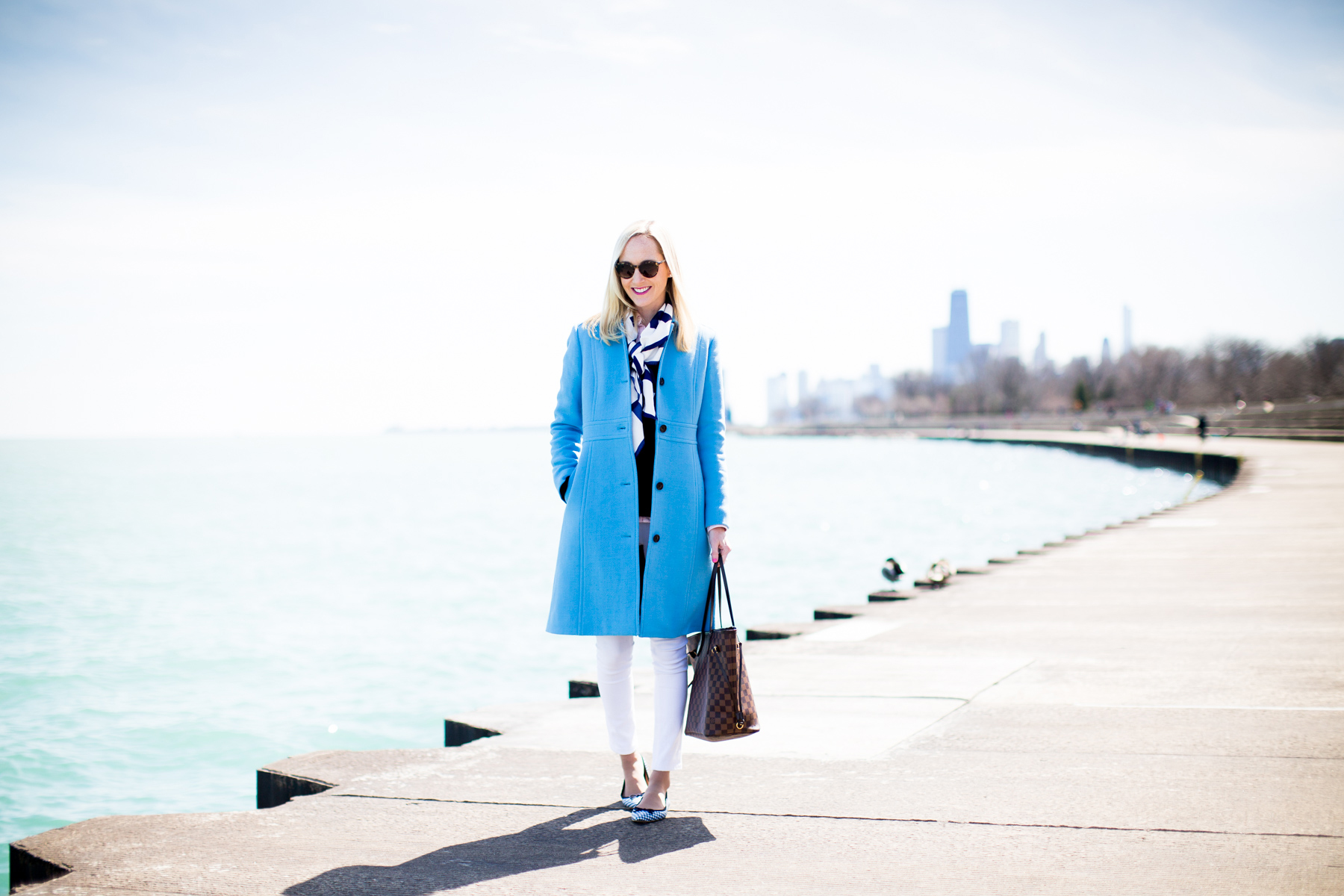 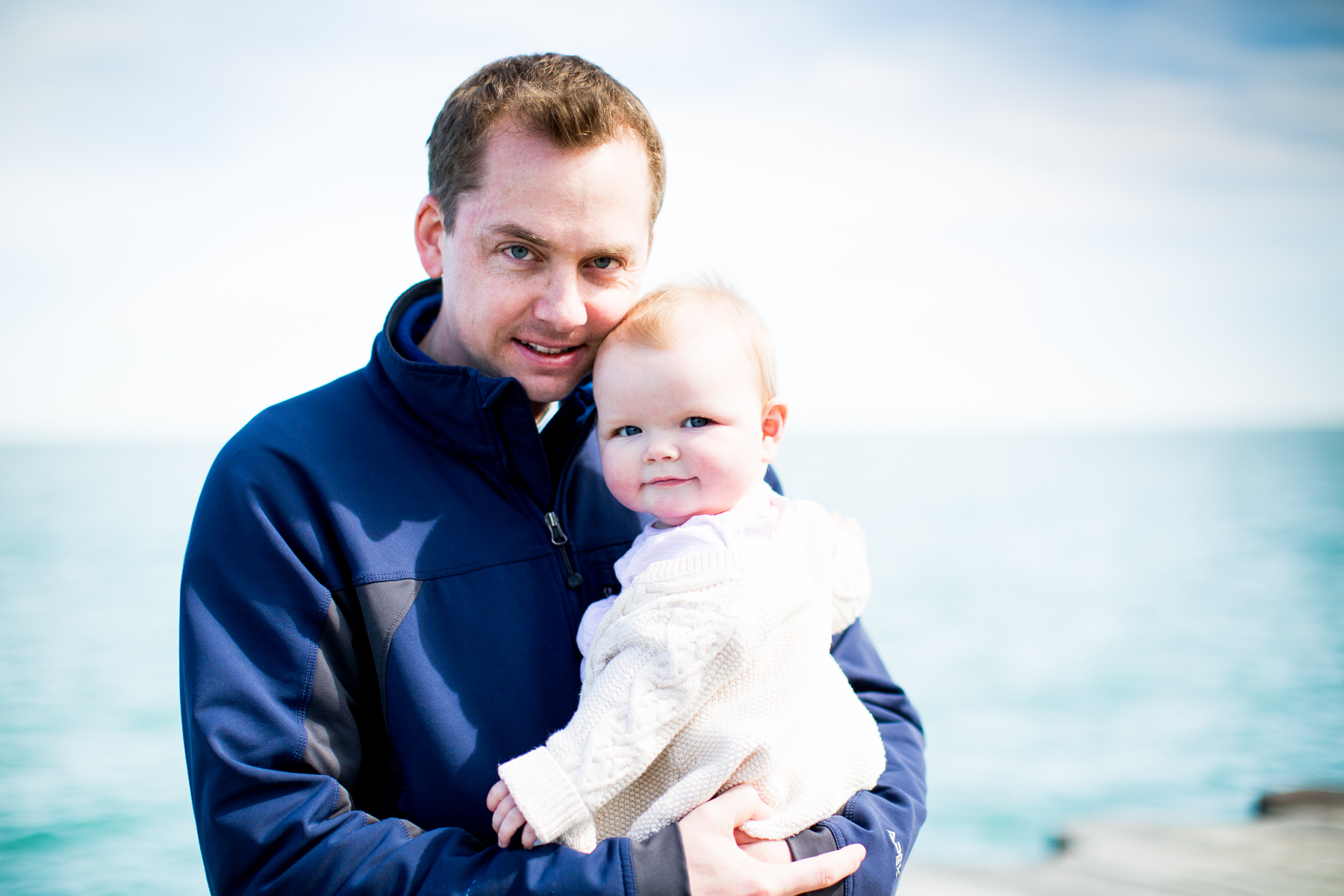 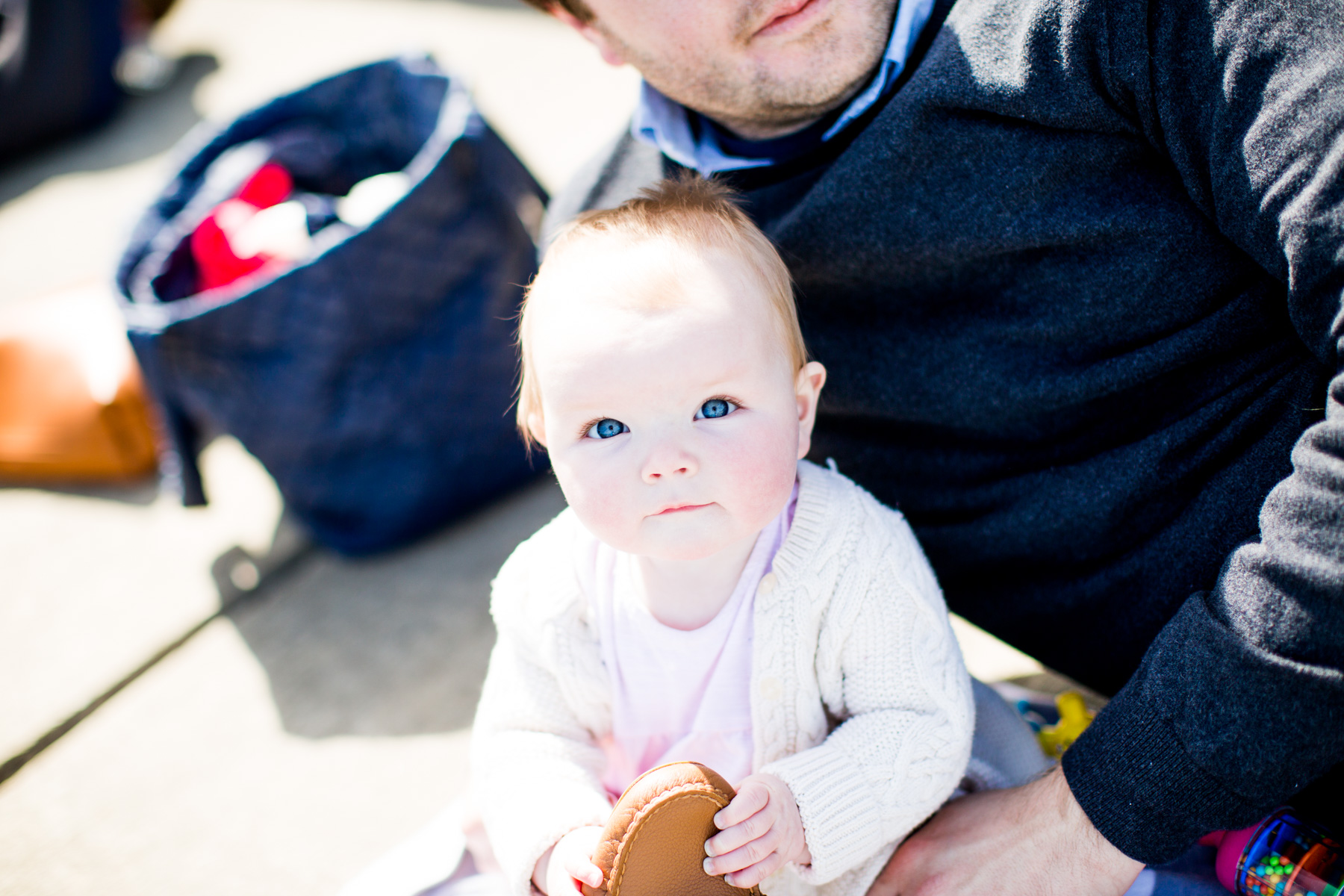 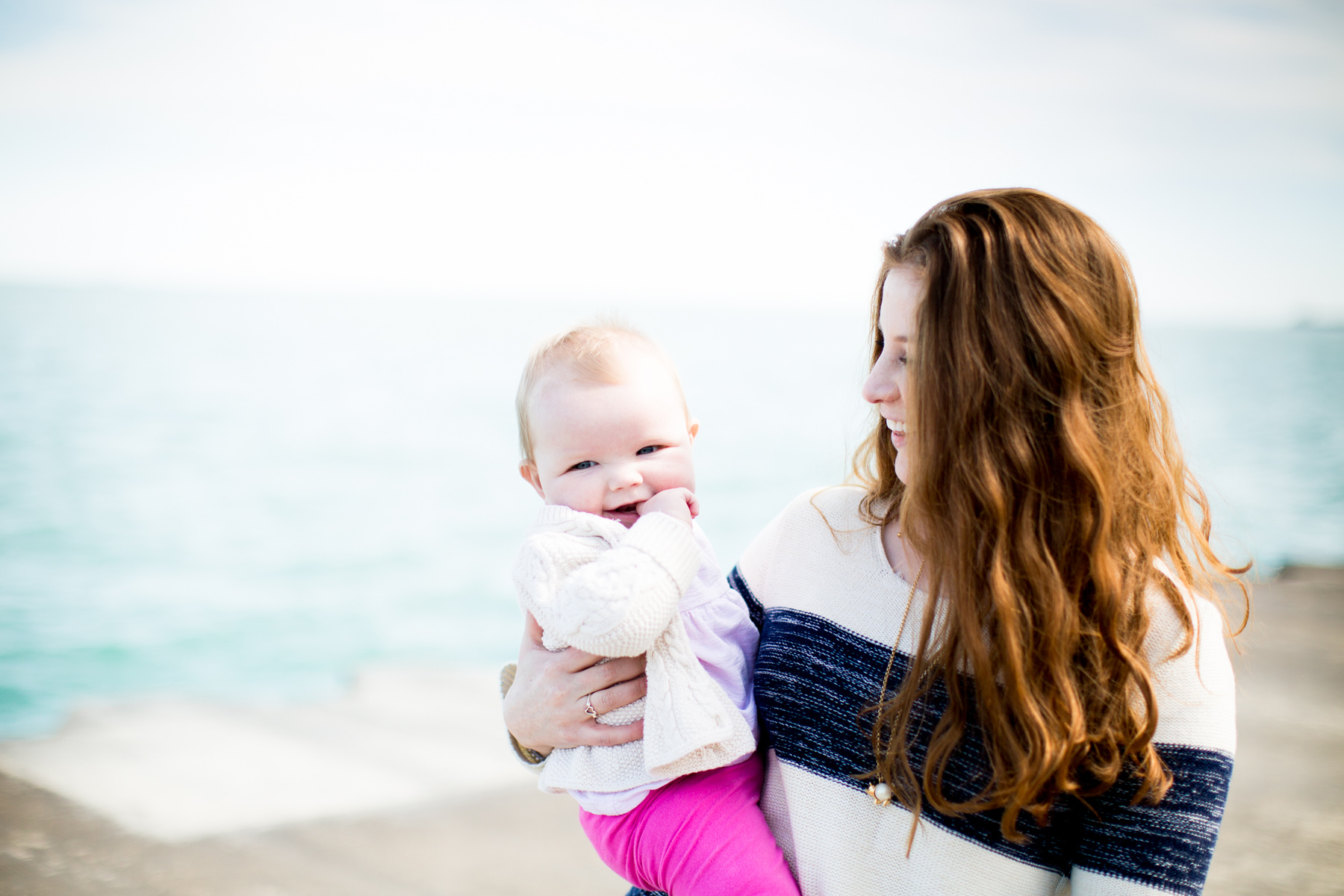 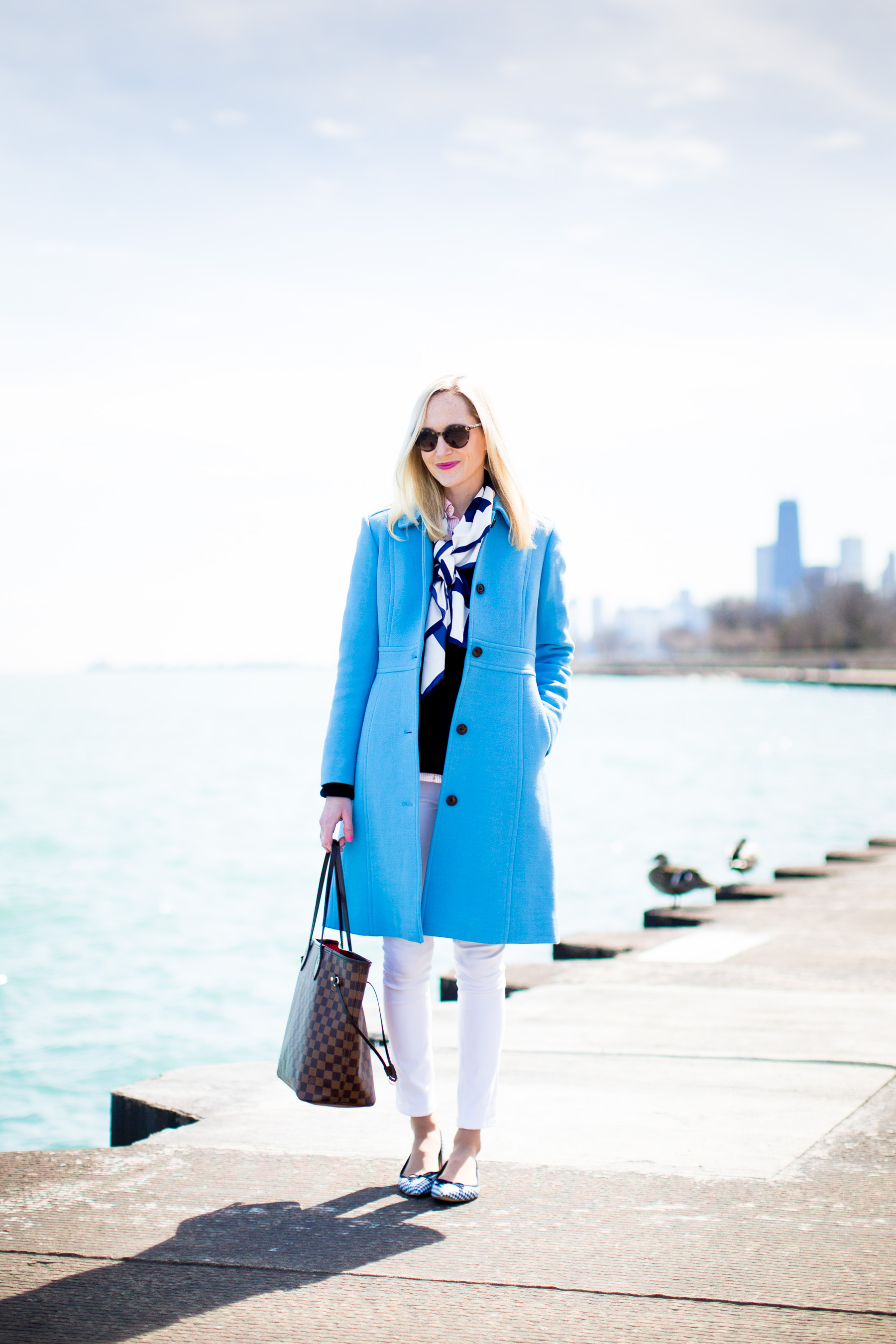 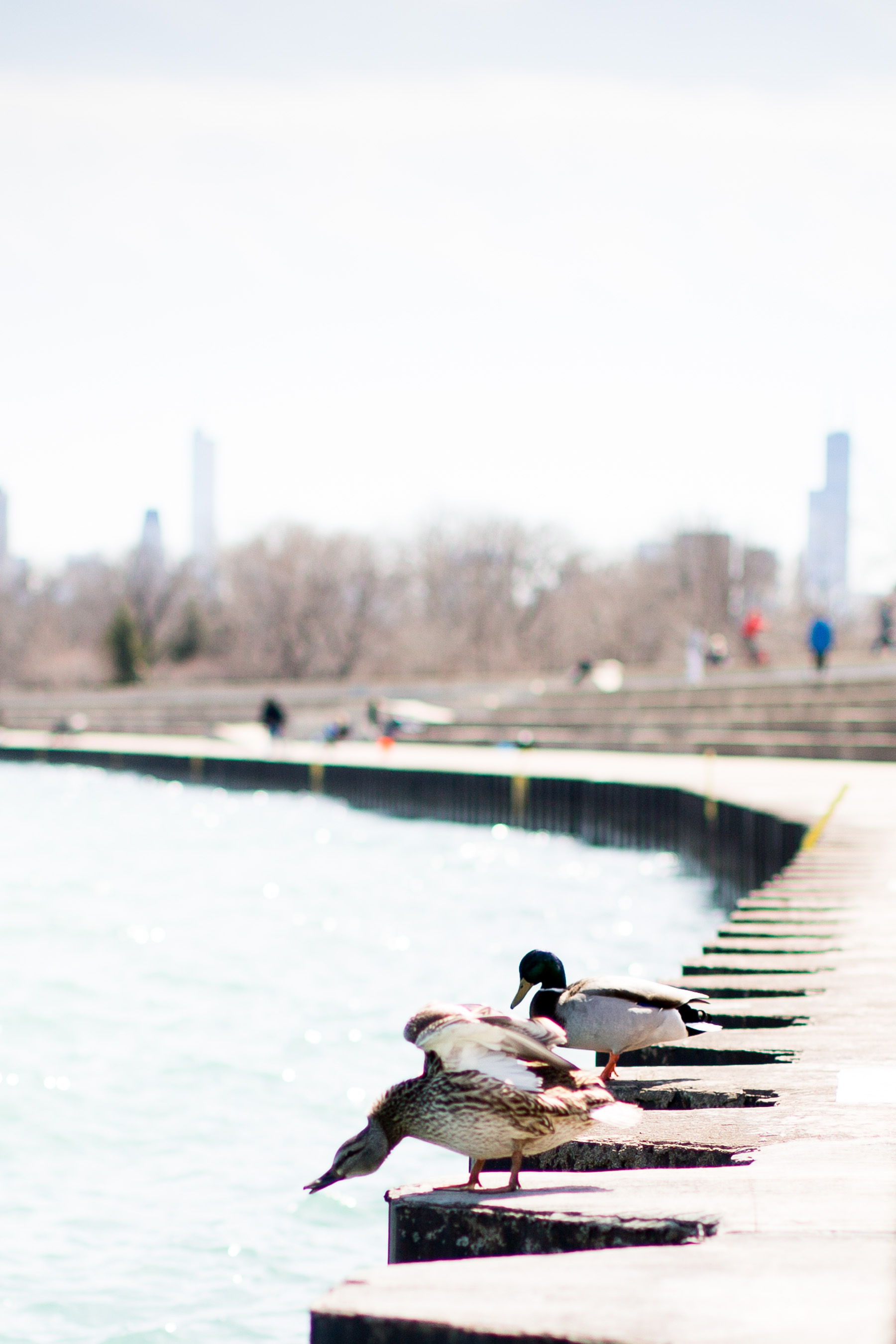 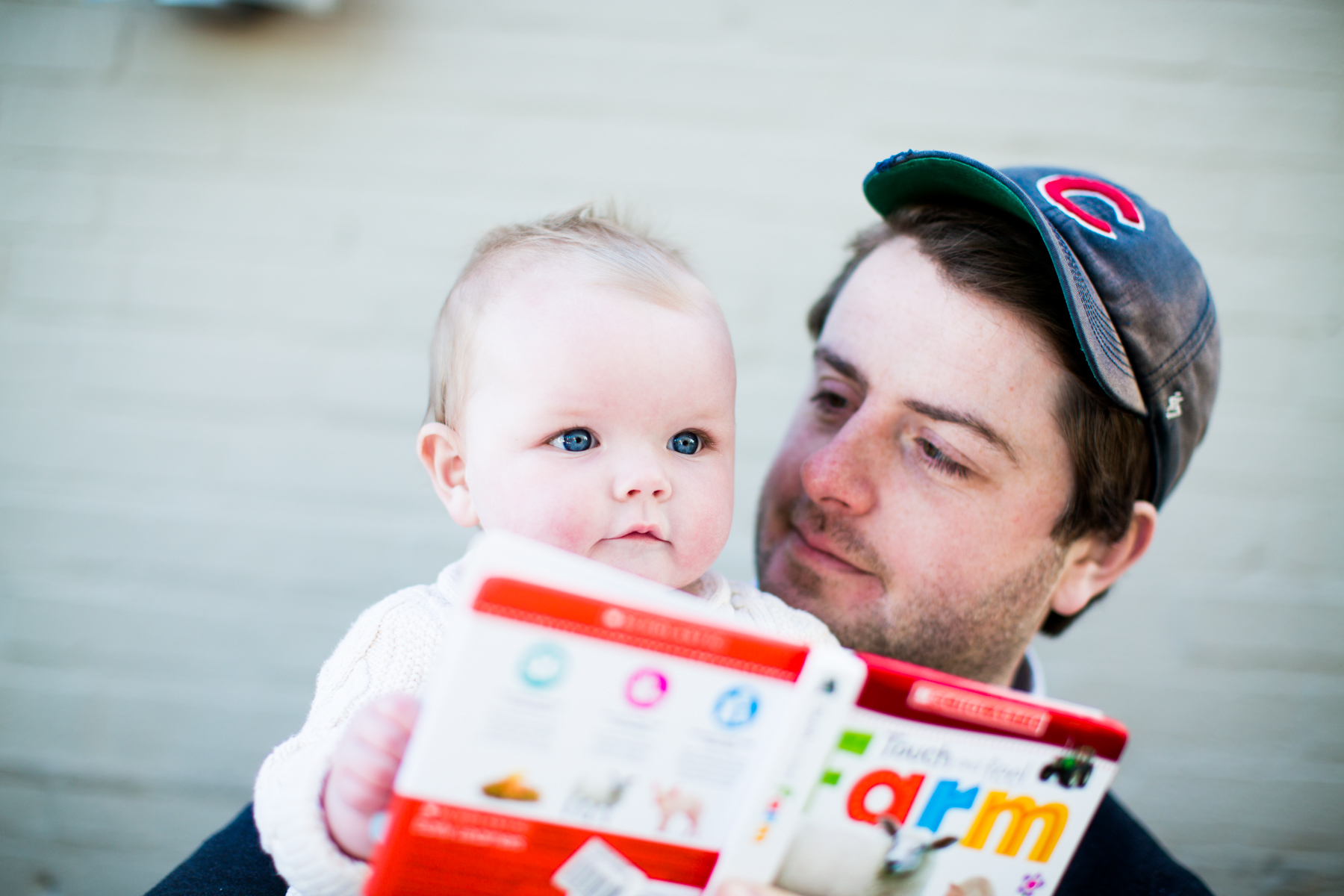 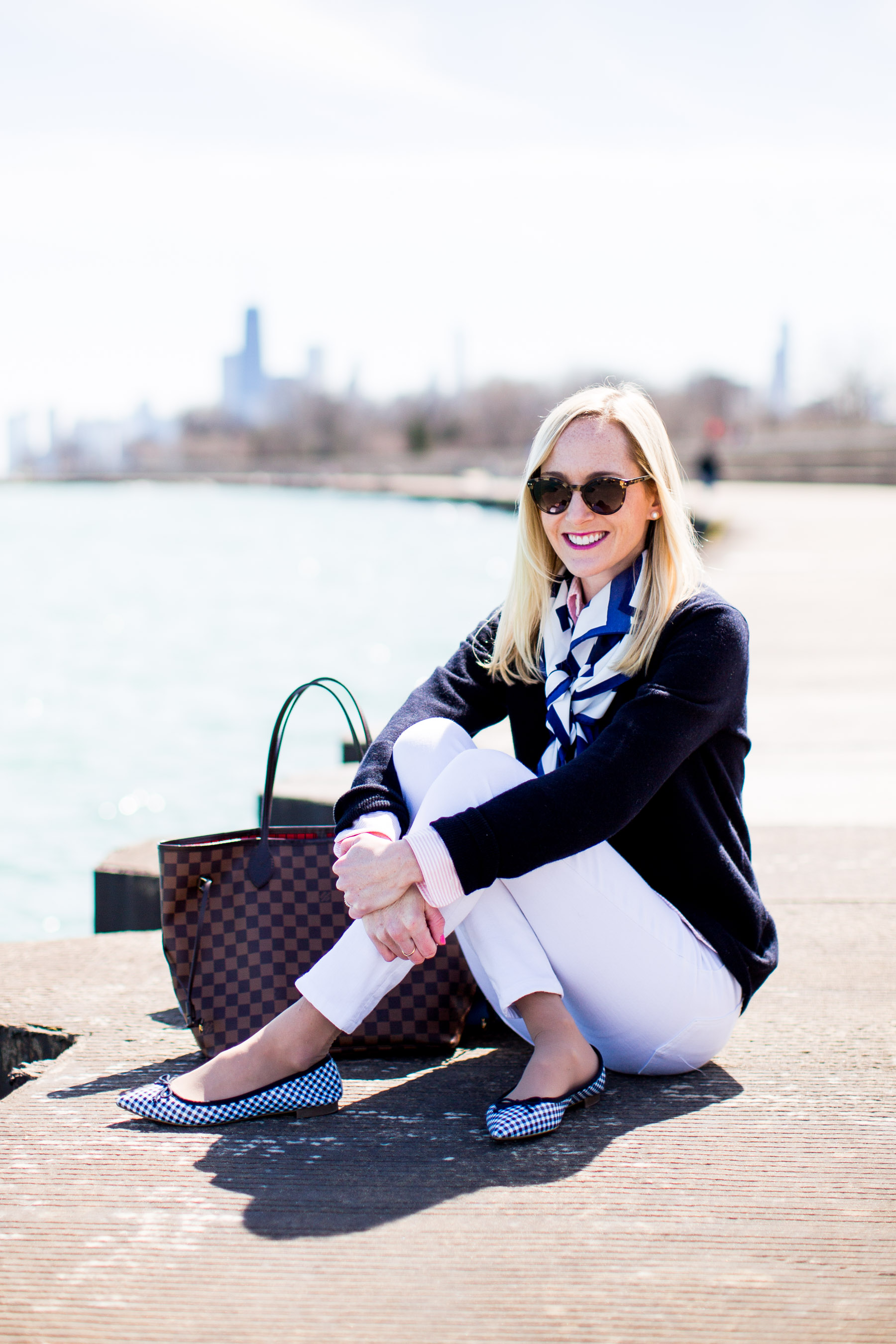 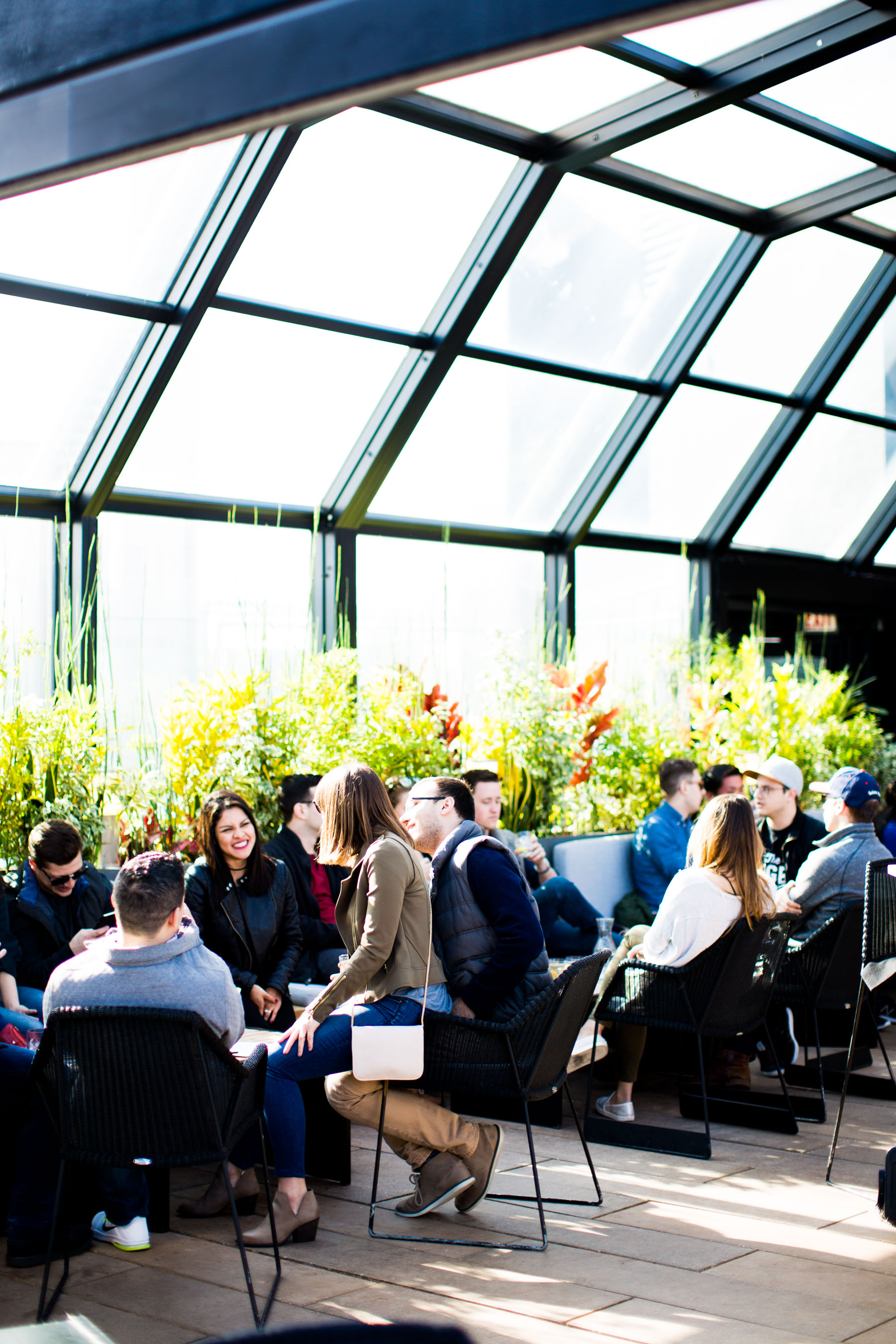 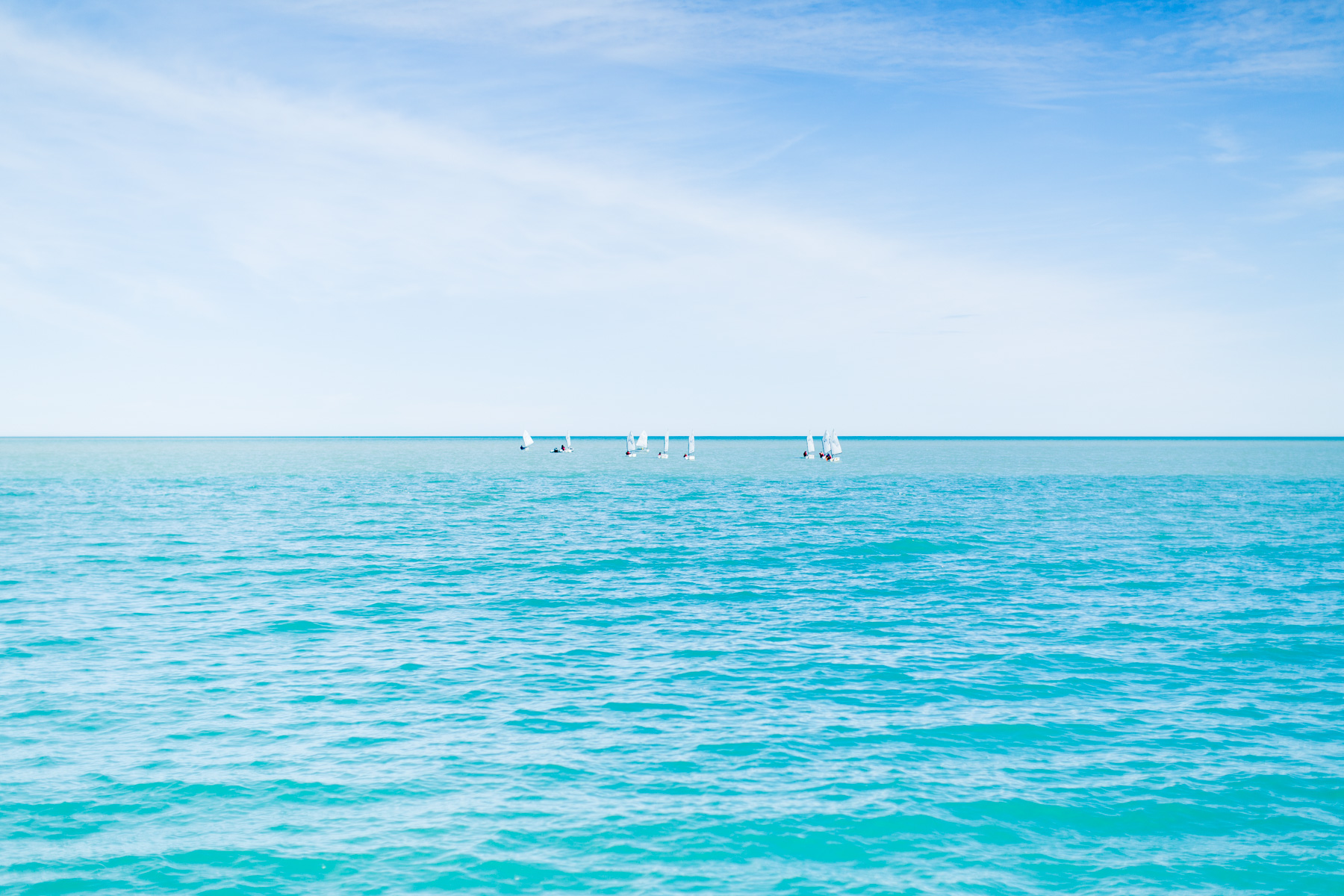 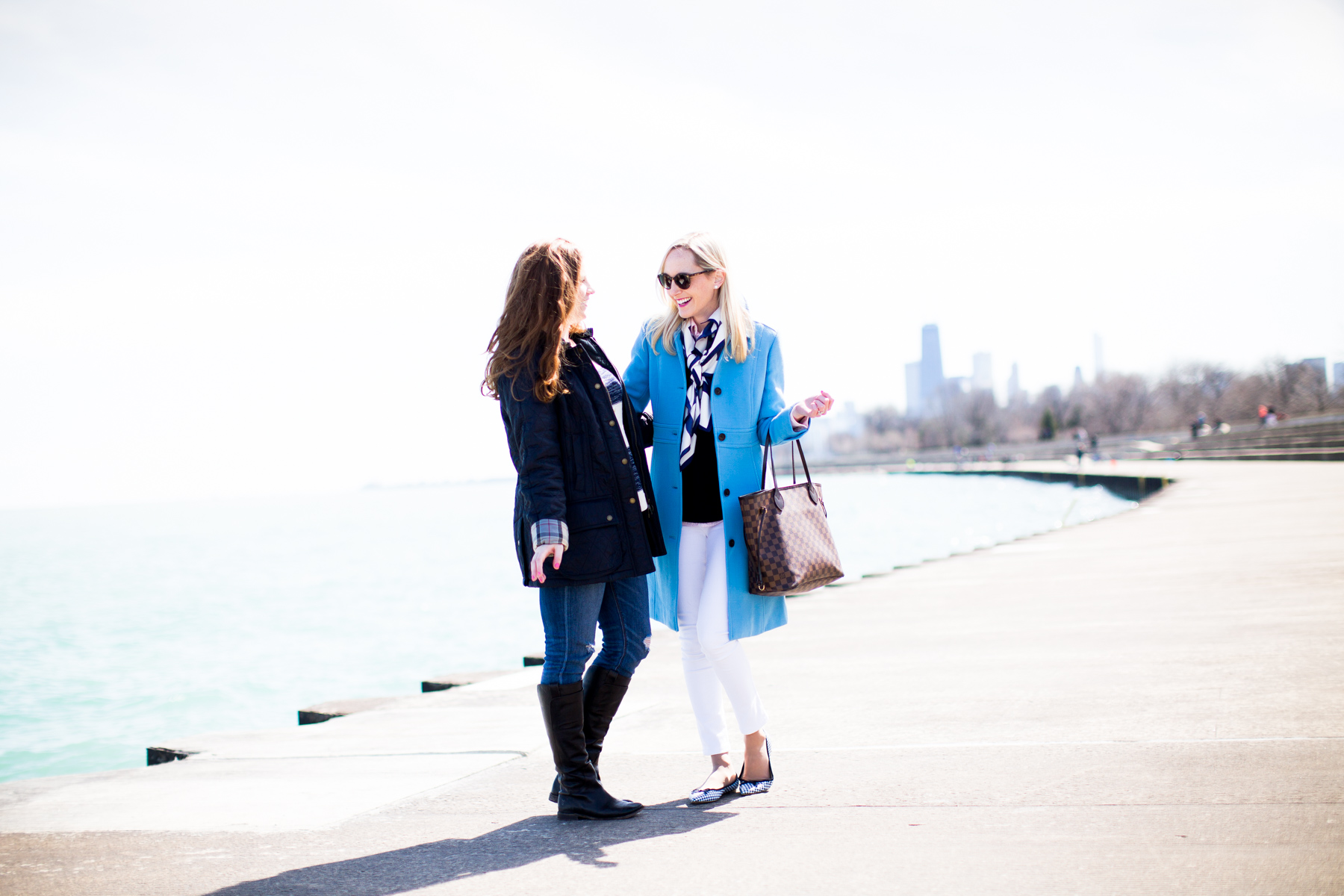 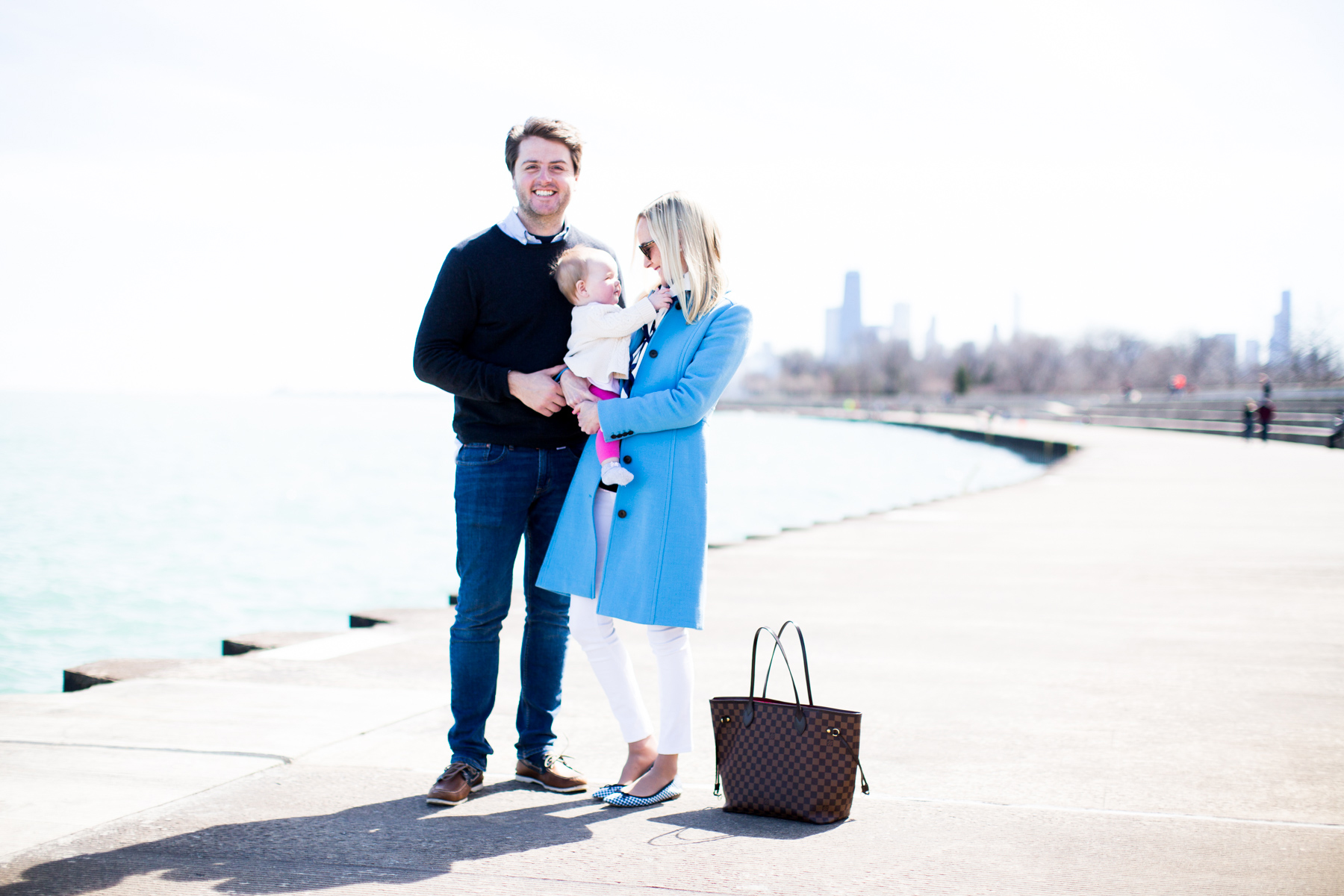 Talbots Gingham Flats (Similar here and here) / J.Crew Coat (Sold out, but how great is this light blue trench?)/ Rag & Bone White Skinny Jeans (Favorite white skinny jeans. Also available on Shopbop.) / Gingham Scarf (On sale! And have you seen Banana’s full gingham collection?) / Everlane Cashmere Sweater c/o — Without a doubt, the softest cashmere I own! / Ralph Lauren Oxford (Also love this one, this one and this one.) / Louis Vuitton Neverfull MM Tote (But here’s my current tote obsession. It’s scalloped and super affordable!) 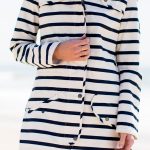