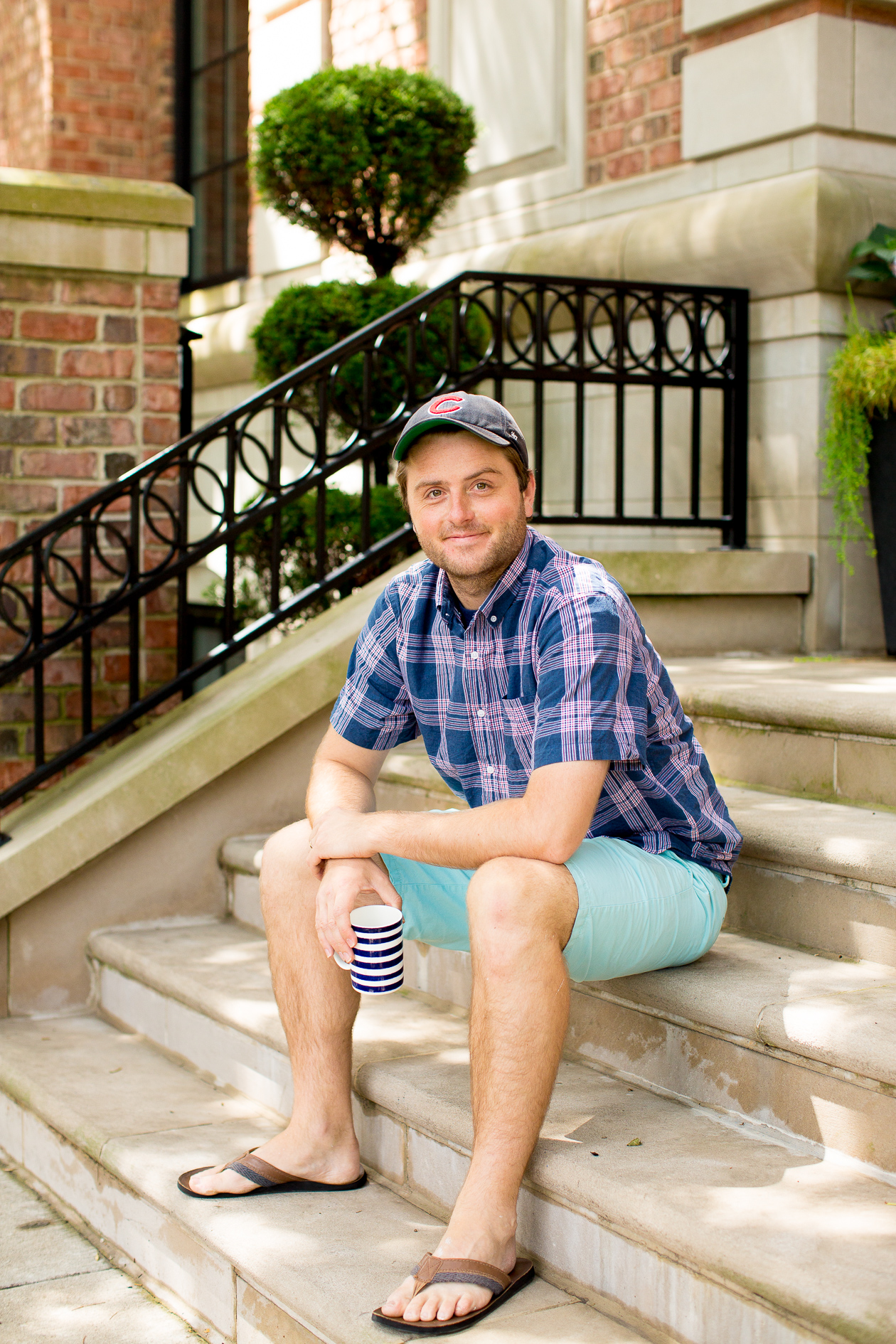 Hello again! Unfortunately for you, I’m back, and I’m writing about summer fashion today. On a scale of one to 10, I’d rank my fashion sense at around “zero,” but below you’ll find some bad style advice from a 30-something-year-old guy whose wife runs a fashion blog. This should be good.

Typically, I go for the t-shirt on the top of the pile, and whatever shorts I wore yesterday. If special circumstances arise–e.g., the pile has disappeared, or the shorts are unwearable–I freak out, ask Kelly where she put all my stuff, and demand that she explains what goes with what. (Again.)

We’ve always lived in tiny apartments with limited closet space. When space is tight and your wife is Kelly Larkin, there tends not to be enough room for a traditional male wardrobe. It’s the perfect excuse for having that aforementioned pile! Now that we live in a slightly larger space, and now that the in-ground swimming pool has been removed from our bottom floor, I have my own dresser and closet. Look at me go! Yet the pile still exists. I just no longer have a good excuse for it.

The navy t-shirt is the most versatile piece of clothing a man can own. It’s bold enough to wear alone but simple enough to be worn as an undershirt when it’s time to go to dinner. It’s perfectly dressed up or down depending on the occasion, too. I typically wear mine inside-out so lettering doesn’t show through that eventual outer layer. Yes, there are seams, but you really can’t notice them. (Kelly disagrees.) I own no black clothing to avoid the cringe-worthy navy/black faux pas someone once told me about.

Navy t-shirts have been the backbone of my wardrobe since high school when I stole the famous “This Old House” tee from my father’s closet. It’s still with me to this day, but its shoulders are about to detatch and the back fell out.

Side note: The key to dealing with an aggressive wife who hates your favorite t-shirt and is unusually motivated to hide or (gasp) throw away such an incredible heirloom is to wear the shirt as often as possible. If it’s on your body, she can’t get to it. Just a thought.

I know, I know. The Apple Watch is the equivalent of wearing a sign on my wrist that states, “I’m a dweeb.” But this is a statement I choose to broadcast every day. Because you know what? I am a dweeb. And if a middle school math teacher can’t wear a computer on his wrist, who can, right?!

Though the Apple Watch isn’t the life-changing device many expected it would be, it’s the coolest watch I’ve ever owned and I like having it on. So that’s that.

Also, notice how the navy band matches my navy tees. All planned.

My primary mode of transportation during the summer. I’ve always worn them until they literally fall apart or the holes in the soles (“sole holes”) grow large enough to make walking too painful. Now that I’m all grown up and fancy, I buy myself a new pair when the old pair breaks or when tragedy strikes. (Such as the time when a scoundrel stole my flip-flops off the beach in Ocean City. I didn’t even have shoes to wear to store to buy replacements!) But I used to just resort to flip-flop accessories like duct tape.

If I’m truly motivated, I remember to buy a new pair at the end of the season for a solid discount. But I’ve only pulled that of like once.

Old Navy had a shorts sale at the beginning of the year so I bought every color they had. Eight dollars per pair! I normally hate shopping, but this was pretty fantastic.

Before this sale, I just went for khaki-colored shorts and the occasional pair of Nantucket Red shorts. Kelly would always try to buy me different colors, but I resisted, thinking colors would only further complicate my morning “fashion routine.” But let’s just say this: a few pairs of colored shorts, and here I am on a freakin’ fashion blog. And Kelly is constantly telling me how cute I look. It’s worked out pretty well. Eight-dollar shorts, you’re awesome. And I was wrong.

We’ve been painting our house since the beginning of July. A new fireplace, built-in shelves, nursery and guest room have required countless coats, drop cloths, taping, sanding, spackling, etc. Kelly says I should have “paint clothes” that I wear every time we paint, that way I don’t “ruin” everything I own. But my “fashion routine” does not allow for that. Thus, most of my clothing is now splattered with white paint. It think it adds character. Hopefully Old Navy has that eight-dollar shorts sale again next year.

The coffee mug in these pictures represents the countless gallons of coffee I’ve chugged while shooting Kelly over the years. Don’t get me wrong: I love helping out with the blog in any way I can, and I actually kind of enjoy taking photos. Over the blog’s three years, Kelly has taught me so much about photography, artistry and hard work. But a hot cup of coffee will always be with me. For every shoot. Just like it is for every 8 a.m. math class I teach. Gets you through.

Note: I prefer a real coffee mug to a travel one. And yes, I realize that our mugs are from Kate Spade. I lost that fight many years ago. Sigh. (But Kelly did recently buy me this narwhal one!)

As you might imagine, I’ve never successfully established a beauty routine. No cocktail of gel, pomade or mousse has ever tamed this block of cowlicked hair.

But here’s what I do:

Lately, my preferred hat has been this dazzling ’47 brand navy Cubs hat. I bought it at Wrigley Field and I’ll wear it until October when the Cubs win the World Series. Which October that is remains to be determined.

Prop dogs are the best accessories as they distract from whatever fashion mistake you’ve made that day. A Labrador or golden retriever would probably make me look a bit more manly, but Noodle is a great prop dog. While she’s squirmy, she can be picked up and made into the focus of the photo. She’s also unusually long, which people seem to really like. And she classes up blog photos like you wouldn’t imagine. I mean, let’s be serious: photos of Mitch with Noodle > photos of Mitch alone.

Short-sleeved dress shirts have been the fashion equivalent of a mullet for a long time. But I love them, and I’ve been told that they’re “in” again. Thoughts? They look great and keep you cool in the summer. Win, win, right?

However, I’m starting to get nervous that plaid is on its way out. Can anyone give me an update on this? Is plaid still acceptable? Kelly says it’s fine, but I look around crowds and I’m pretty sure I’m the only guy still wearing plaid. Unless I’m with Doug Charron. (Thanks, Doug. #Represent. Also, do you have this shirt yet? It’s great.)

Life is good when you can grab a short-sleeved shirt from your pile, throw it on over an inside-out navy tee, pop a flip-flop, snap on a Cubs hat, grab a coffee and take on the day. 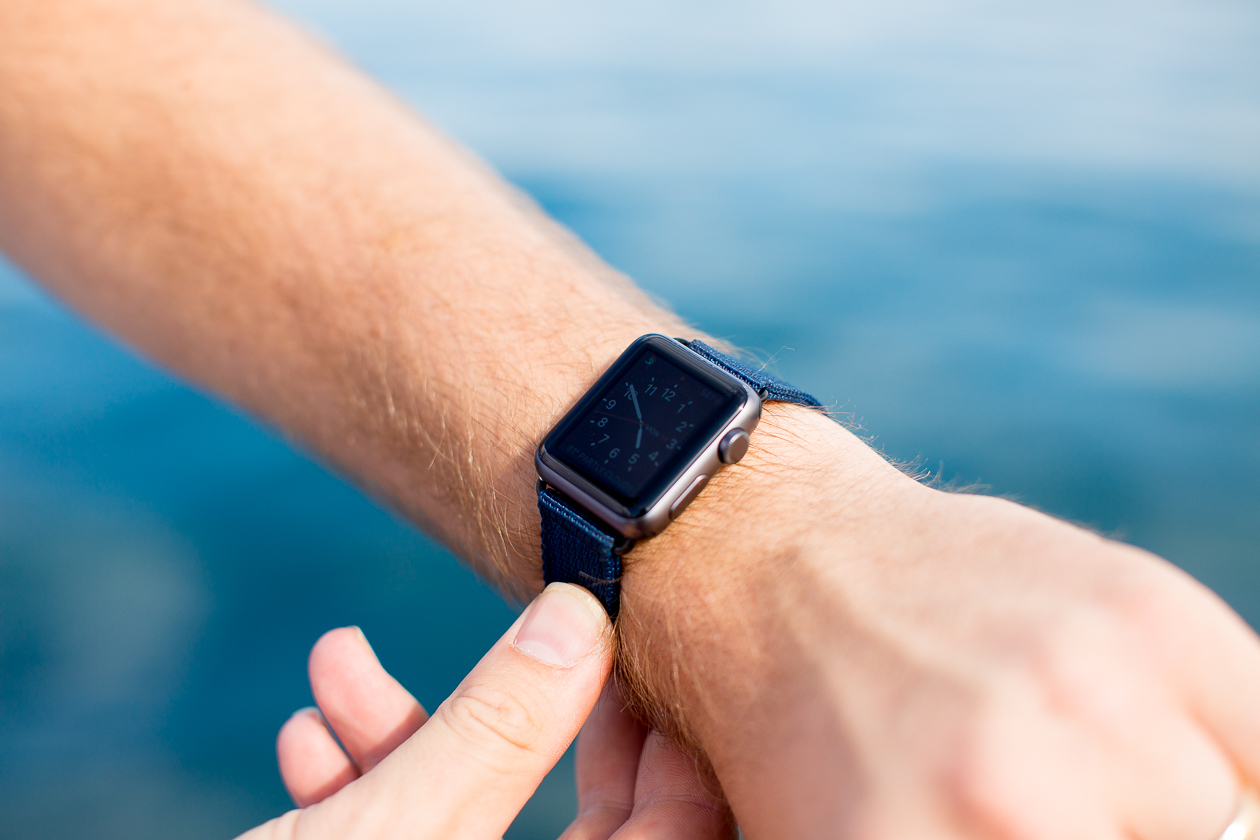 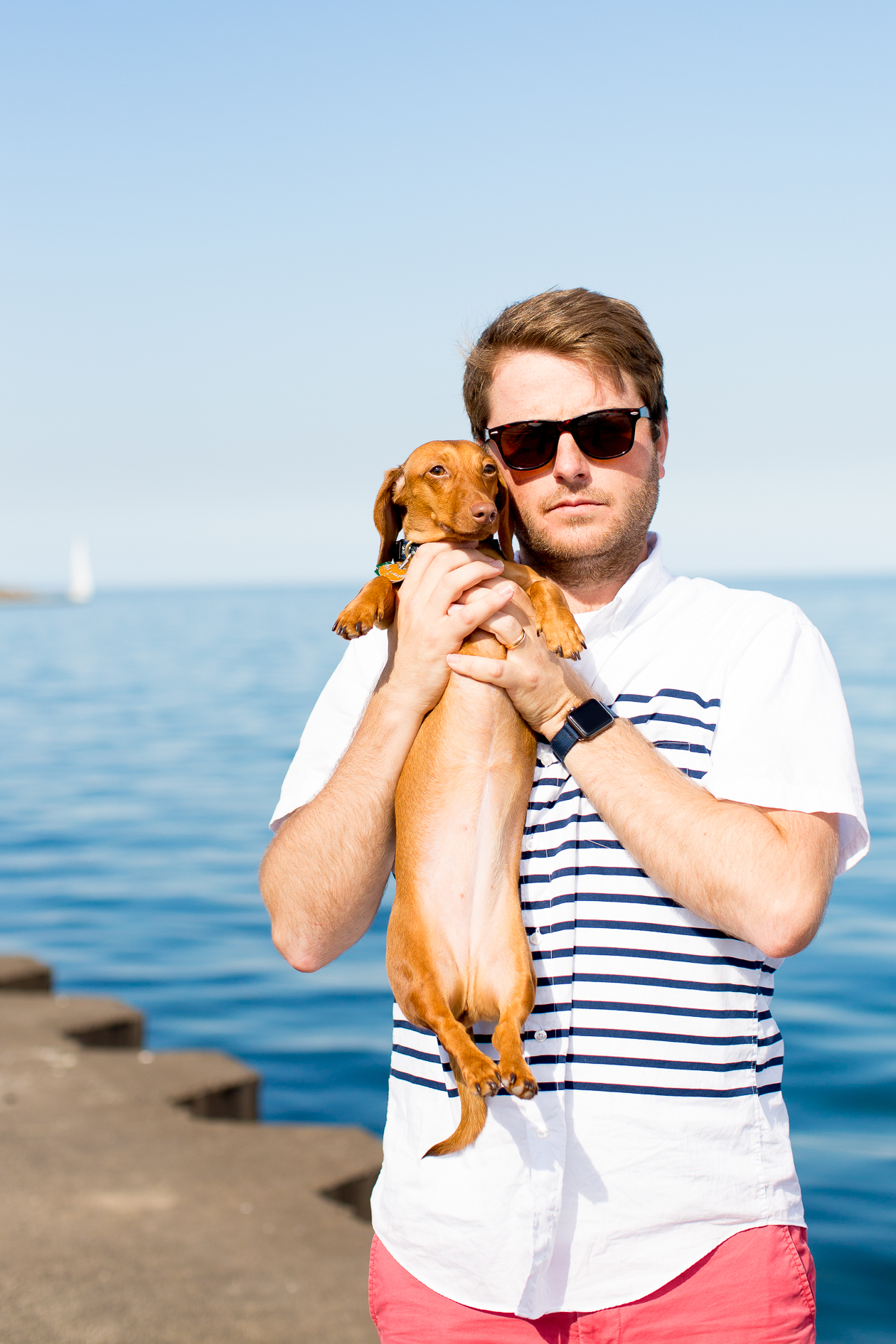 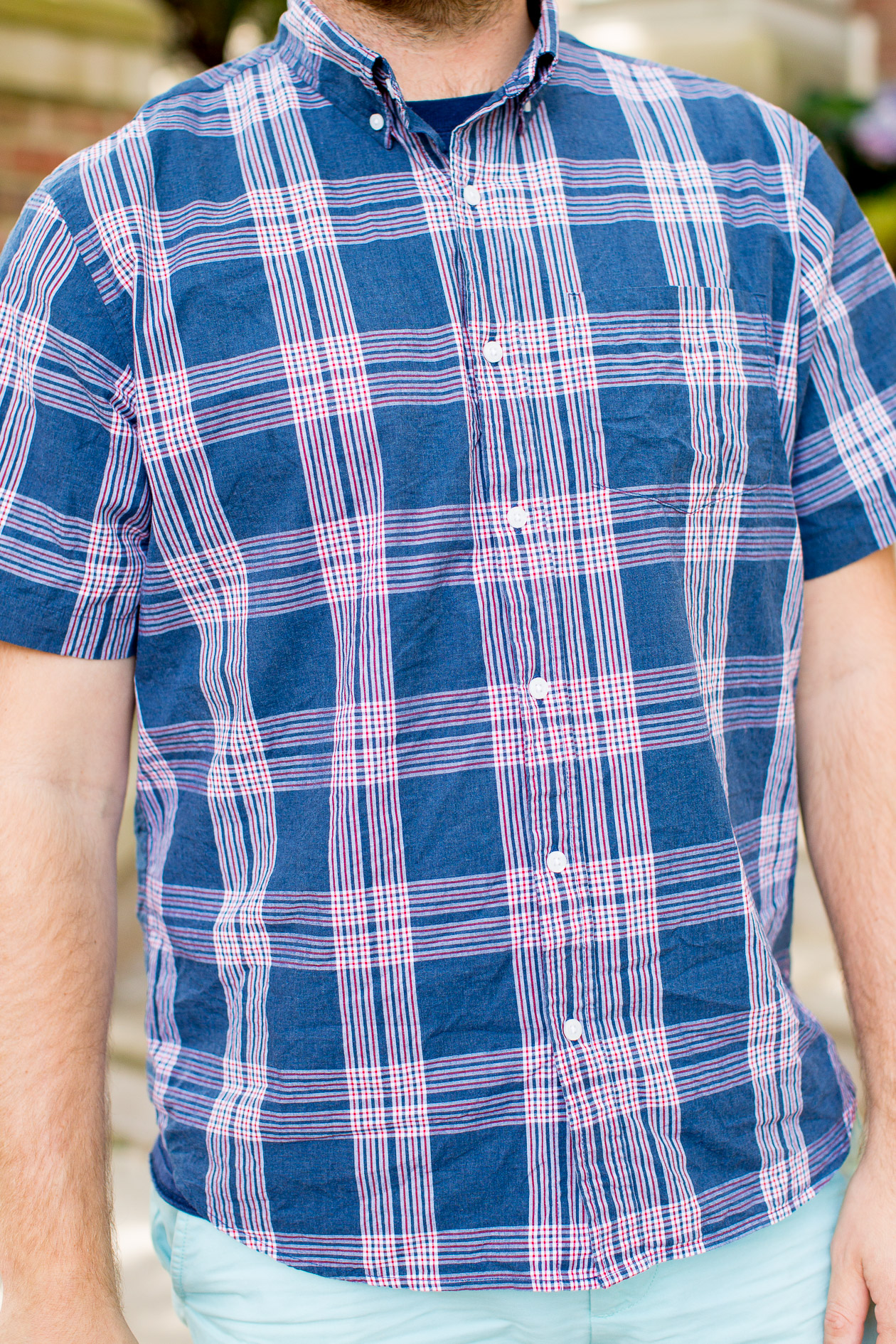 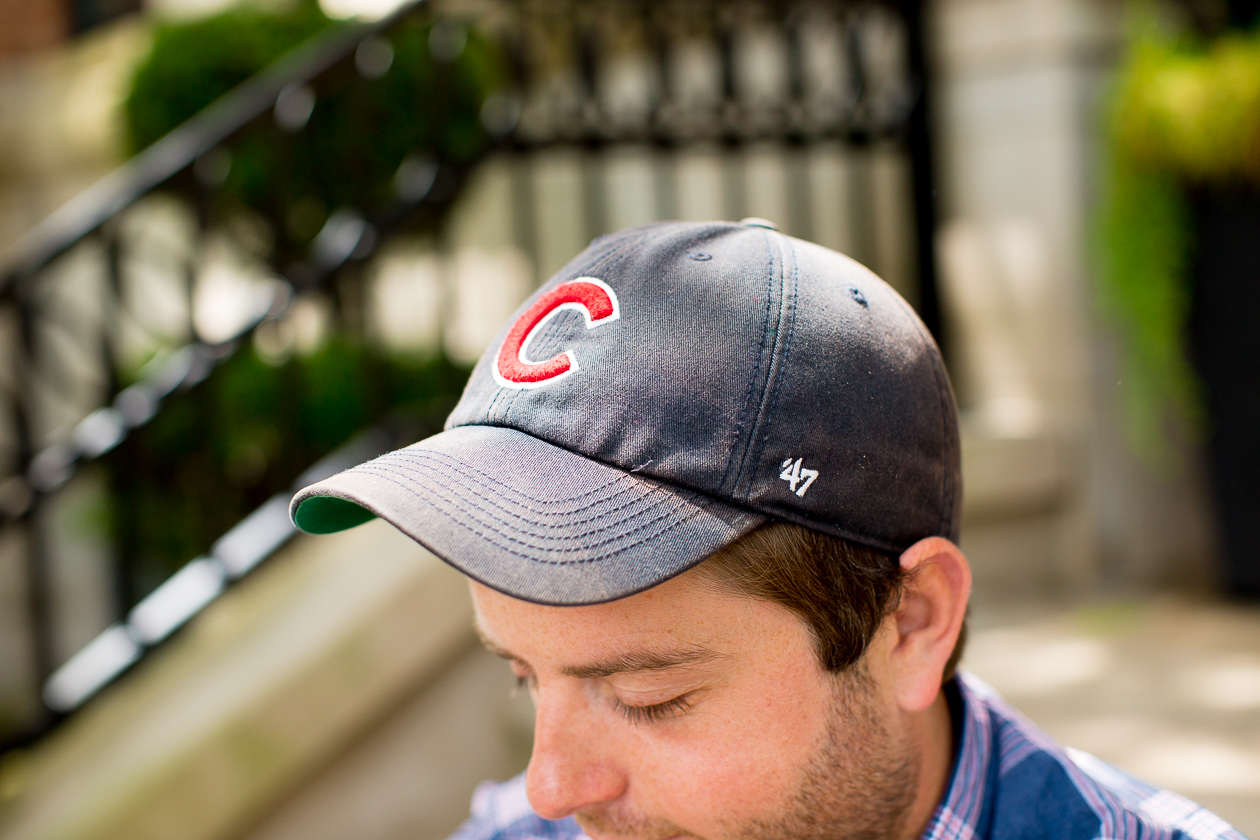 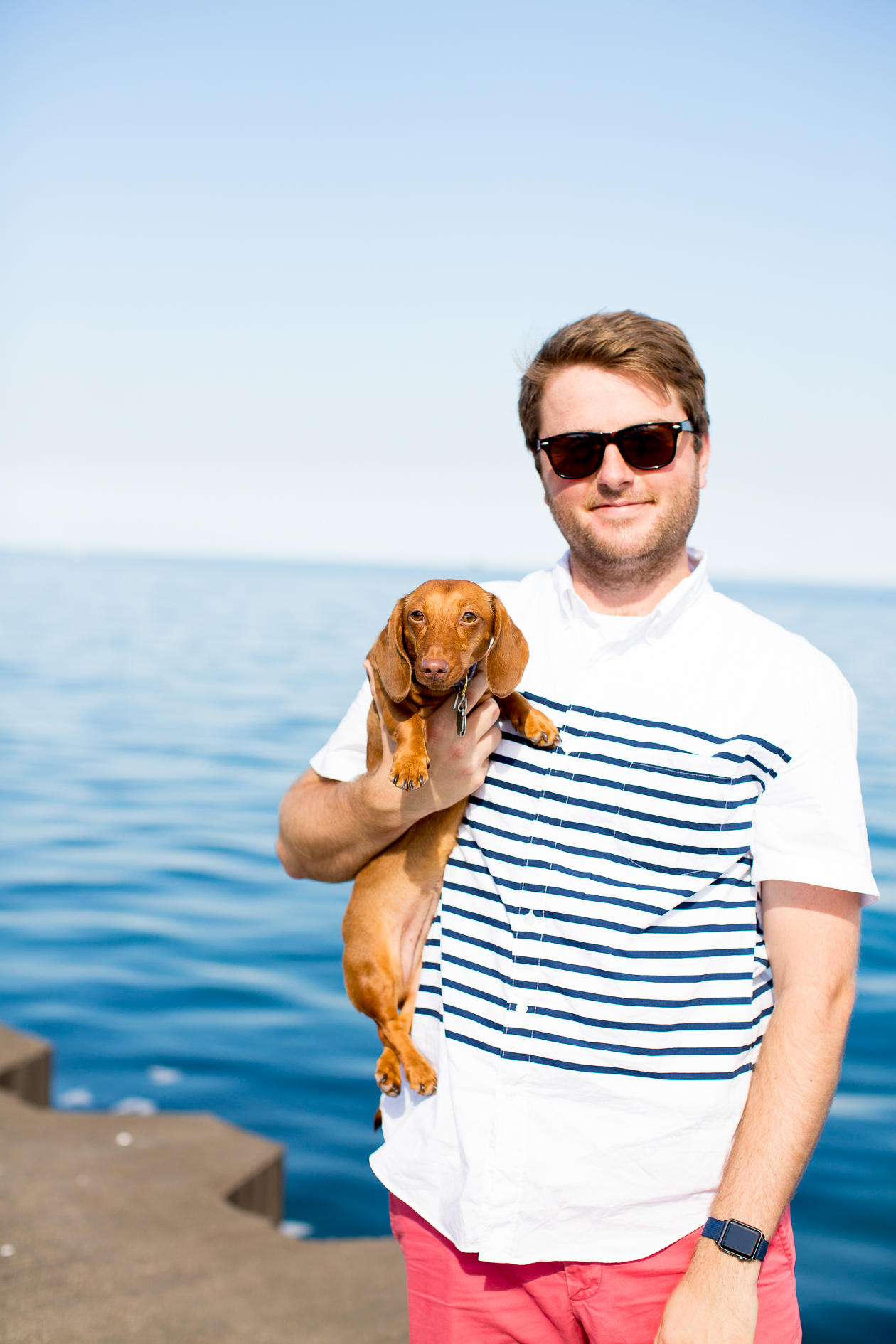 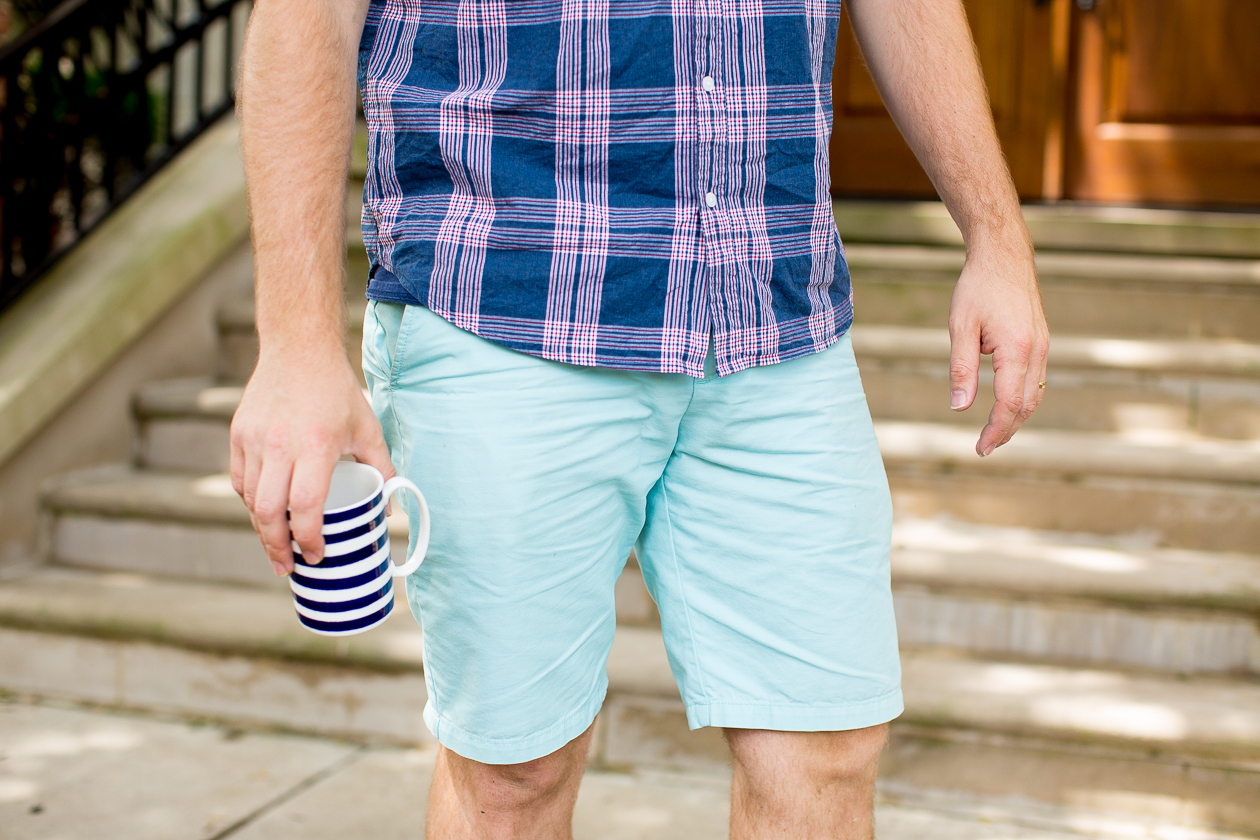 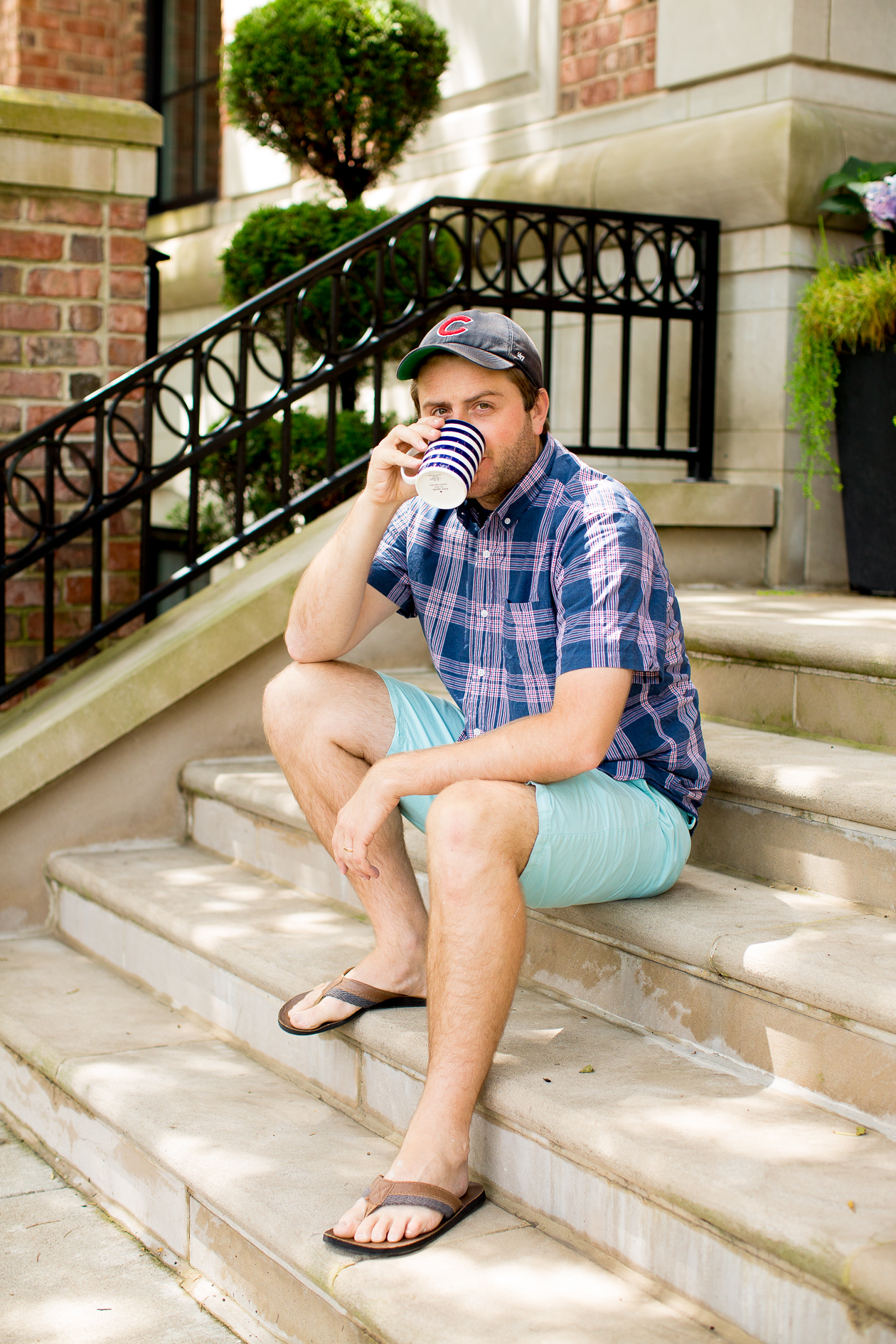 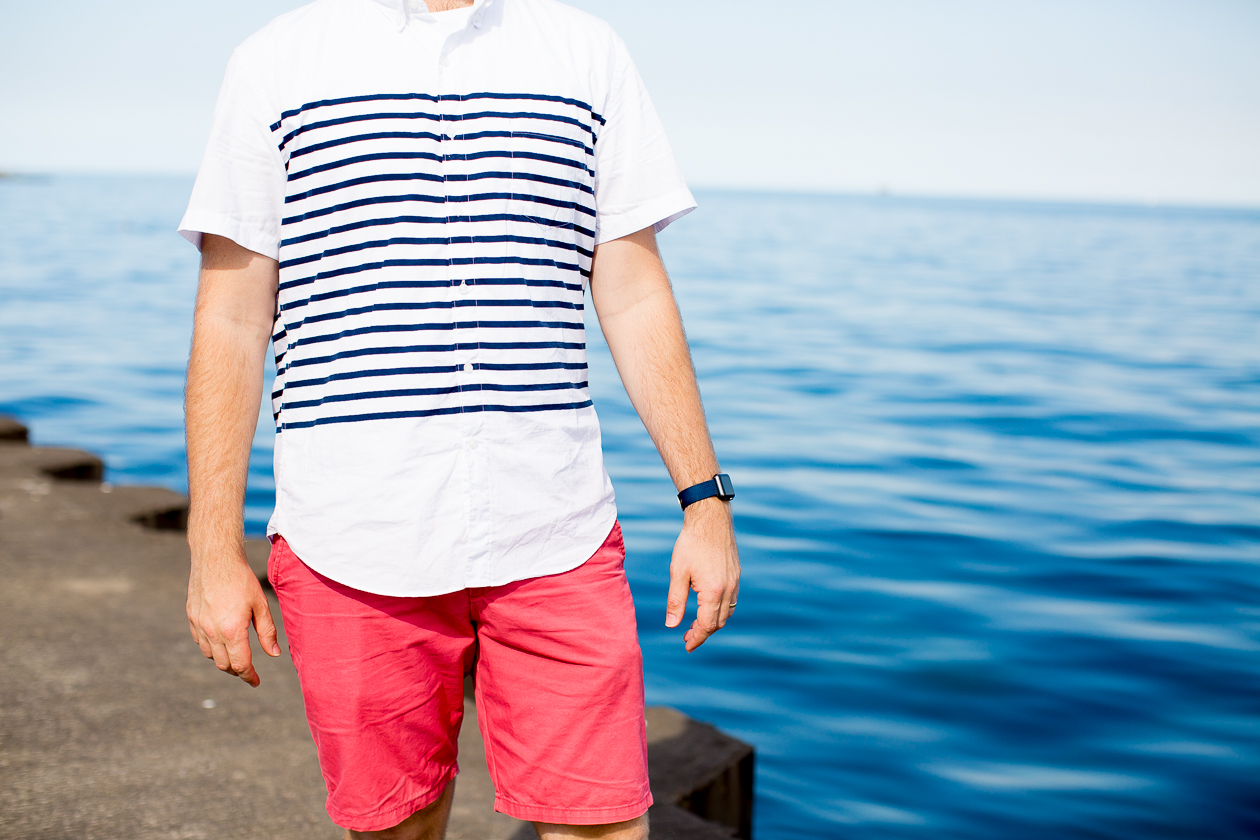 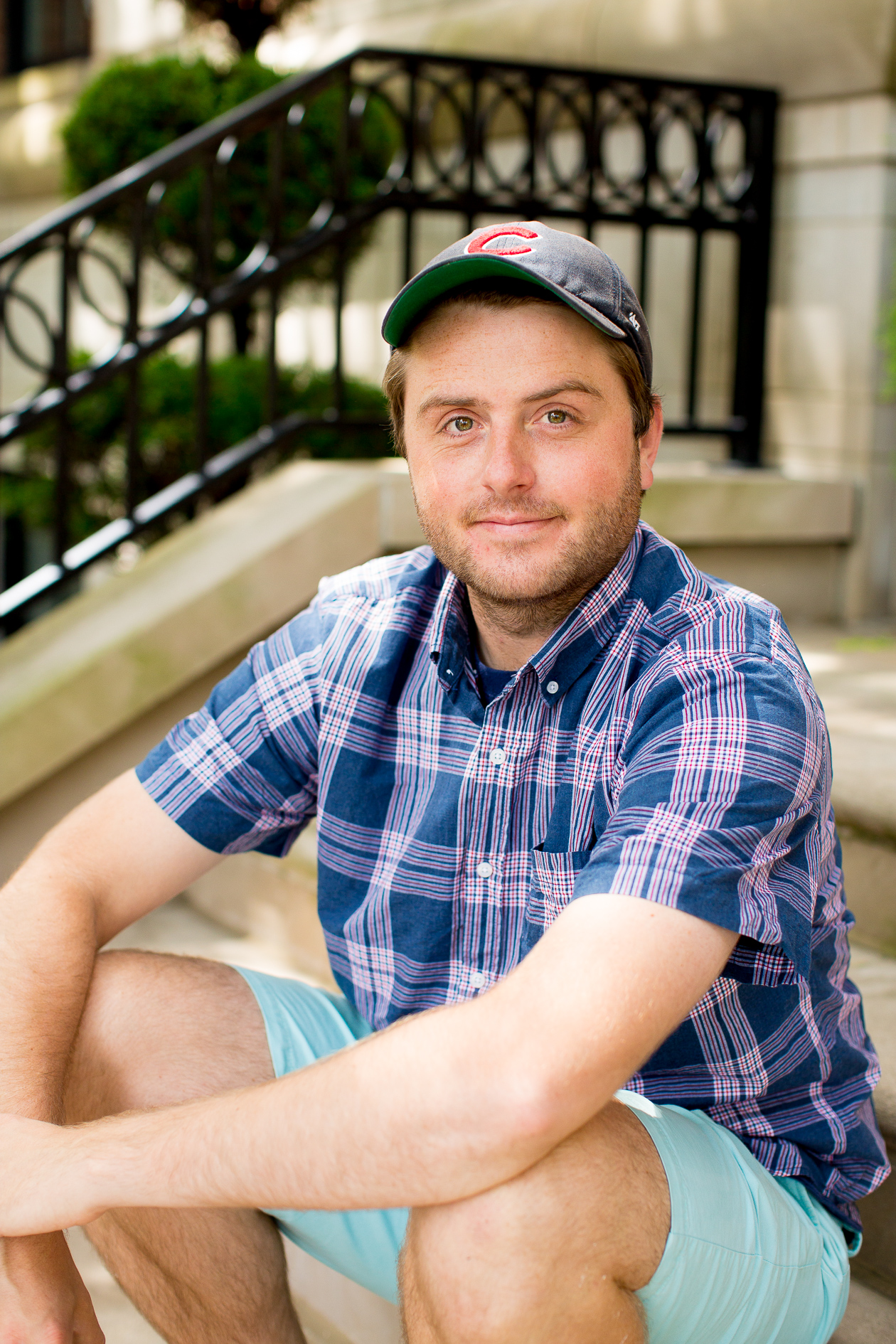 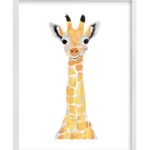 Previous Post:
Minted Giveaway (And Help us Choose Art for the Nursery!)