How to Take Fashion Blog Photos in Winter 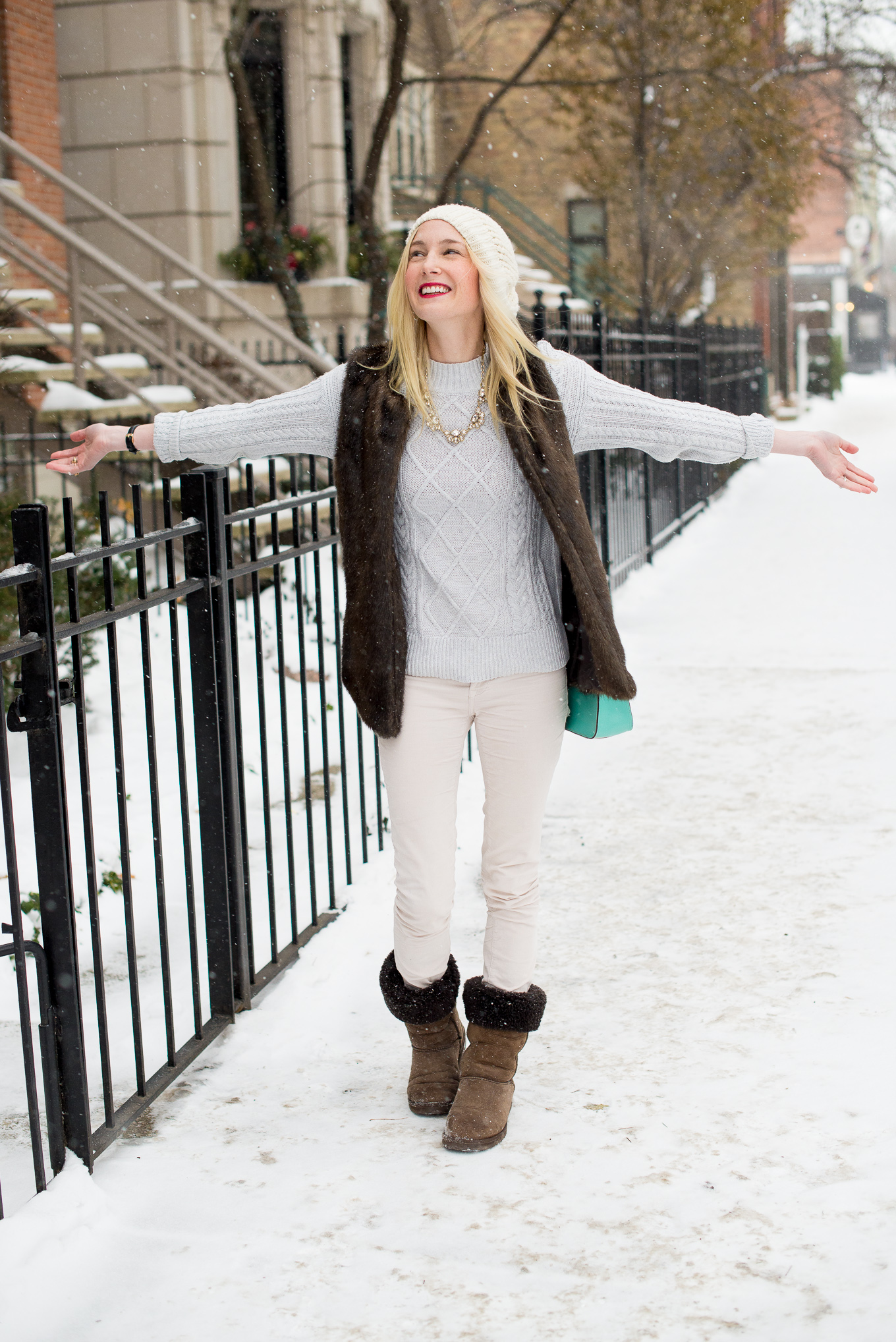 Old Navy Cable Knit Sweater (c/o) / Forever 21 Faux Fur Vest (Inspired by this one, but I couldn’t pass up F21’s price! The Forever 21 one runs HUGE, so be sure to size down. Also love the leopard version!) / J.Crew Necklace (Old, similar here and here… and ADORE this new one!) / Kate Spade Bag (Old, but I’m crazy about this bag–in green–from Henri Bendel!) / BlankNYC Cords (Similar here) / Ugg Boots (Okay. Here’s the deal: I used to hate Uggs. But I dug this pair from my college days out of my closet recently, and they’ve been a lifesaver for this awful, negative-degree week. How adorable are these bow-adorned Uggs, too? And the shorter version? I vow not to make this a regular thing, and to never to wear them with a mini skirt, haha.) / Daniel Wellington Watch (c/o)

I’m the first person to complain about the cold. I’m that girl who carries a cardigan wherever she goes–even in 90-degree weather–just in case. My hands turn blue in over-air conditioned rooms, and I own at least five puffer vests which I wear indoors during three seasons. Clearly, I was meant to live in the tropics.

Over the last few days, I’ve been getting a lot of e-mails and comments on social media about my outdoor photos. Why, in God’s name, would I subject myself to torture… all the for sake of a silly blog post? Especially if I’m not a fan of the cold?

And this, my friends, is a very valid question. ;)

Here’s the deal, though: it’s simply not that bad as long as you’re smart about it.

In this kind of weather, I would never throw off my coat–like I normally do on 30- and 40-degree days–on walks with Mitch. No, no, no. First of all, everything hurts after about five minutes out there, no matter how bundled you are. So on days when the temperatures are in the red, my outerwear stays on during walks.

Second, we’re not really walking very much right now. I mean, we’ll walk a block or two to our favorite local restaurants and bars–What? Mitch has had two days off from work, and we have cabin fever!–but we’re trying to limit our exposure to the elements. When we’re traveling longer distances, we typically jump right into the car. (Total time spent outside: 30 seconds.)

At the same time, running photos of me in my puffer coat on repeat would get old pretty quickly. And this is a style/lifestyle blog.

1. I set the camera settings beforehand. At this point, I can look outside and kind of gauge what my shutter, aperture and ISO settings should be. I shoot at roughly the same time every day, too, so everything is relatively consistent. Also, I almost always slightly underexpose my photos, as brightening up an underexposed photo is far easier than correcting an overexposed one.

3. Beforehand, I warm myself up like whoa. Space heaters are the best! Running out into the cold for 1.5 minutes isn’t that bad when you’re sweating, haha.

4. I forget about finding interesting backgrounds. Bah! Who cares at this point, right? This week, I’m shooting right outside a friend’s front door. I step outside, do my thing, and step right back in.

I could do it outside my own door, but my father thinks there are crazy people out there who might be able to determine where I live through photos. And I’m humoring him, because one time I didn’t heed his advice, and I ended up with a ’99 Volkswagen Jetta that broke down nearly every day.  (Beep, beep.) Better safe than sorry!

5. I shoot with someone I know. Mitch and I, for example, have been shooting together for a long time. Before I started blogging, we ran a small photography business. So shooting a look in 1.5 minutes is totally doable for us. He knows what to get: a couple of full-body shots, a couple of portraits, and a few “detail” photos of my shoes, bag and jewelry. Likewise, Jess and Blair are amazingly talented photographers, and we’ve done countless speedy shoots together. (Though we’re taking a break from it right now, as traveling to each other’s apartments in this weather would be rough. Miss you, guys! Whimper.)

6. I feature what I’m actually wearing. Dressing up in this little number, for instance, and taking photos during a blizzard simply isn’t going to happen… as much as I think it’d make for some really cool pics. I try my best to keep things real here, and it’s important to me to only feature looks that I actually wear. Who wants to see me play dress up? I’m guessing no one. ;)

I should mention, however, that I sometimes shoot multiple looks at once in an effort to save time. But they’re always either outfits that I’ve already worn or plan on wearing that week.

7. I laugh. Because it’s funny. I hop around, sing songs from Frozen, and squeal a little. I joke with strangers passing by, and I have a sense of humor about it. To be honest, Mitch and I have had some pretty fun, memorable and hilarious experiences during these shoots.

8. I don’t do it every day. Sometimes, I’m not feelin’ it. So I skip it. Other times, Mitch is unavailable… and I’m not with friends. So don’t think this is something I do on the reg. :)

10. I remember why I’m doing this. I love photography, and have done some pretty wild things to “get the shot” in the past–even when I didn’t have a blog. It’s just part of who I am. I would be a sad girl if I didn’t have photos to mess around with for a week just because of a cold spell. Similarly, I love blogging, and don’t want to take a significant amount of time off from creating new style posts.

… So there you have it. Am I crazy? Yeah, probably. ;) But I hope that this sheds a little light on the matter. It’s truly not as bad as it looks! 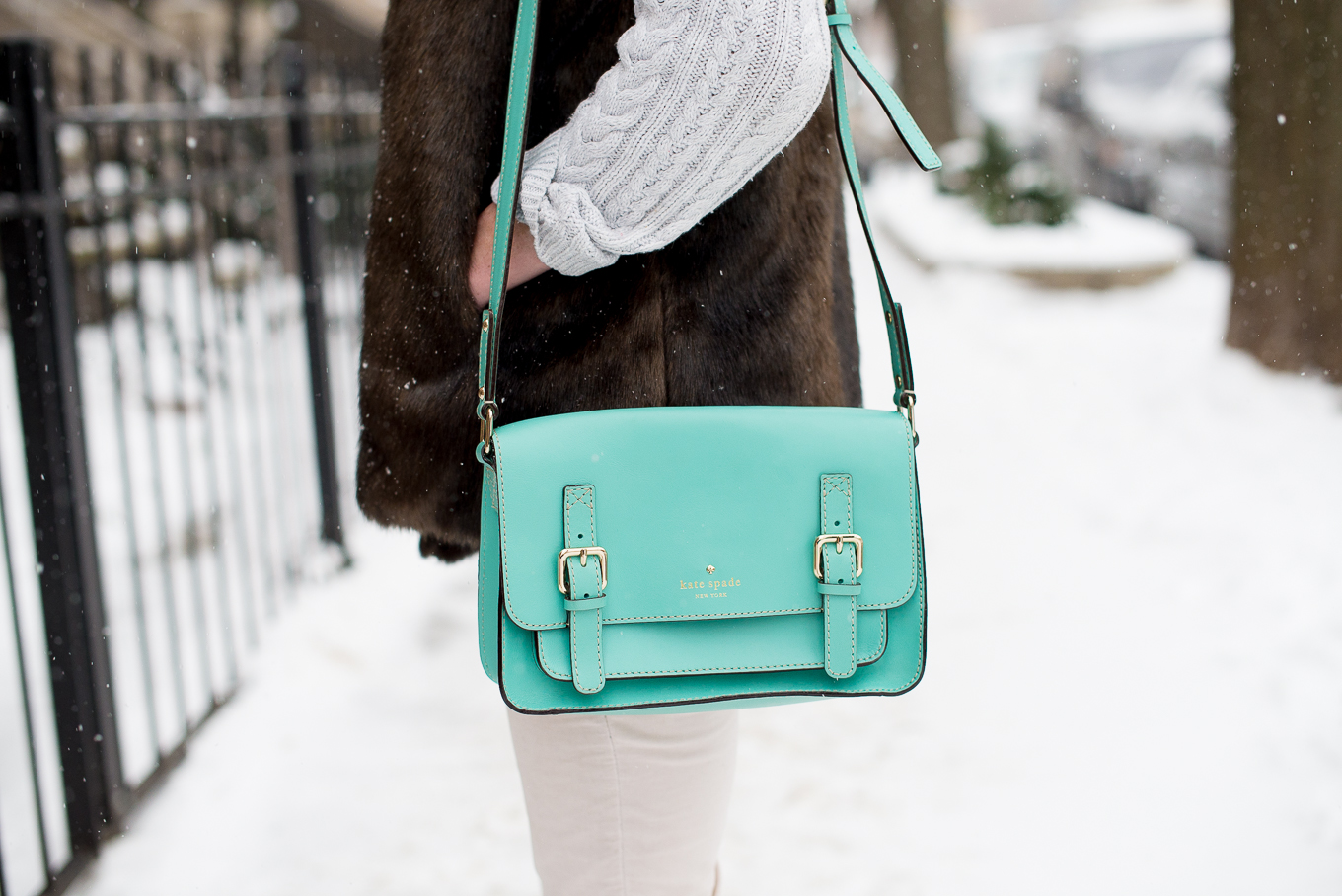 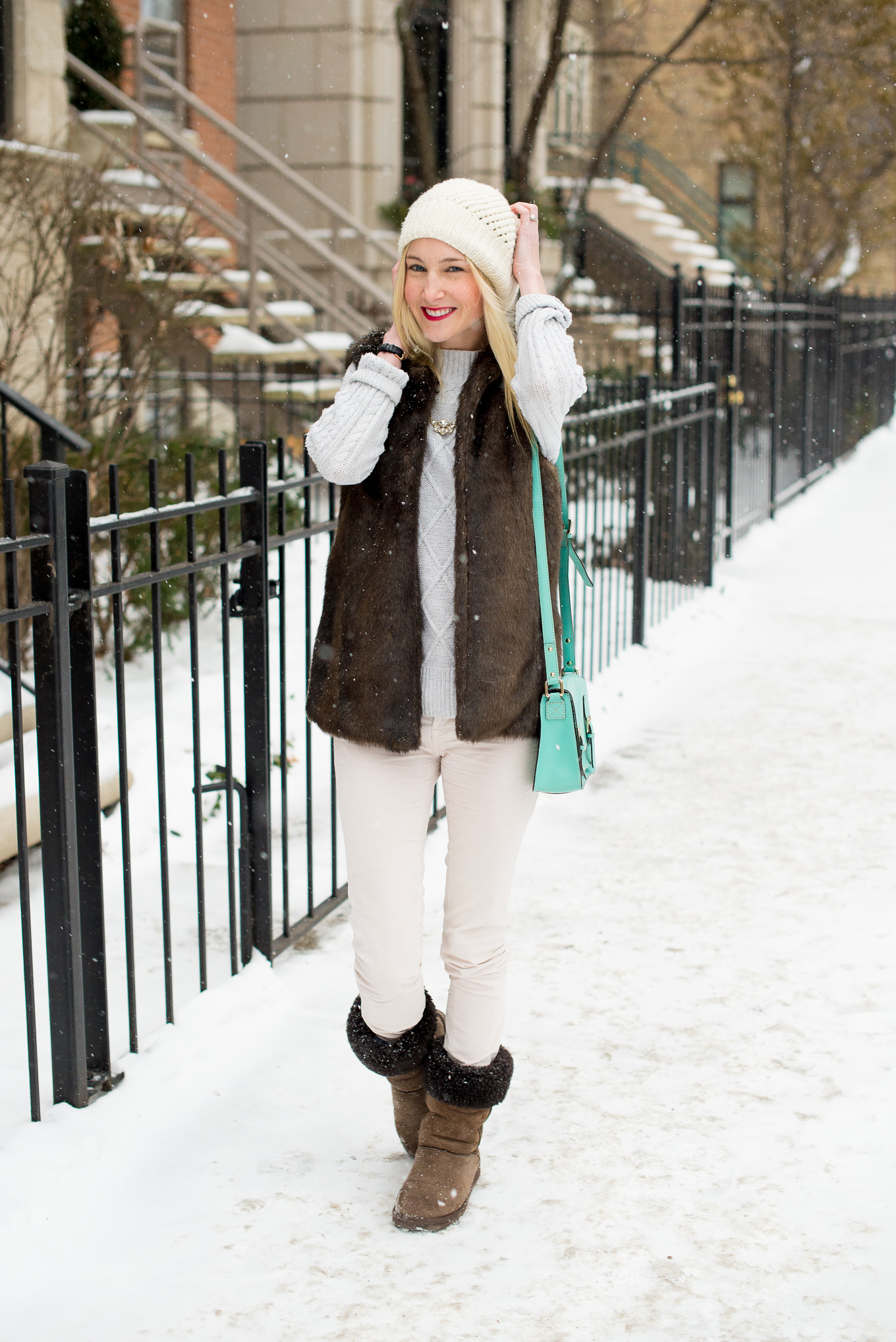 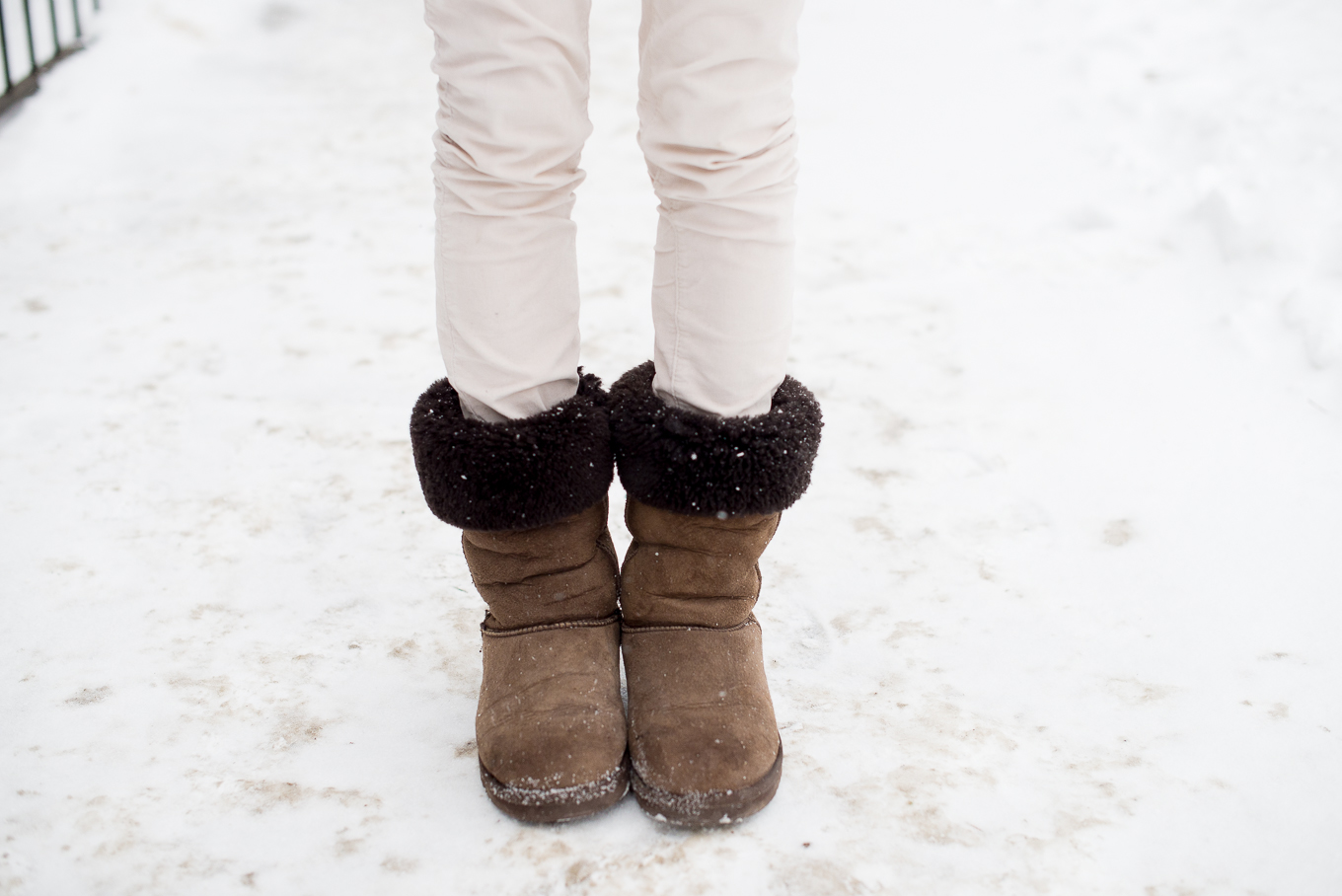 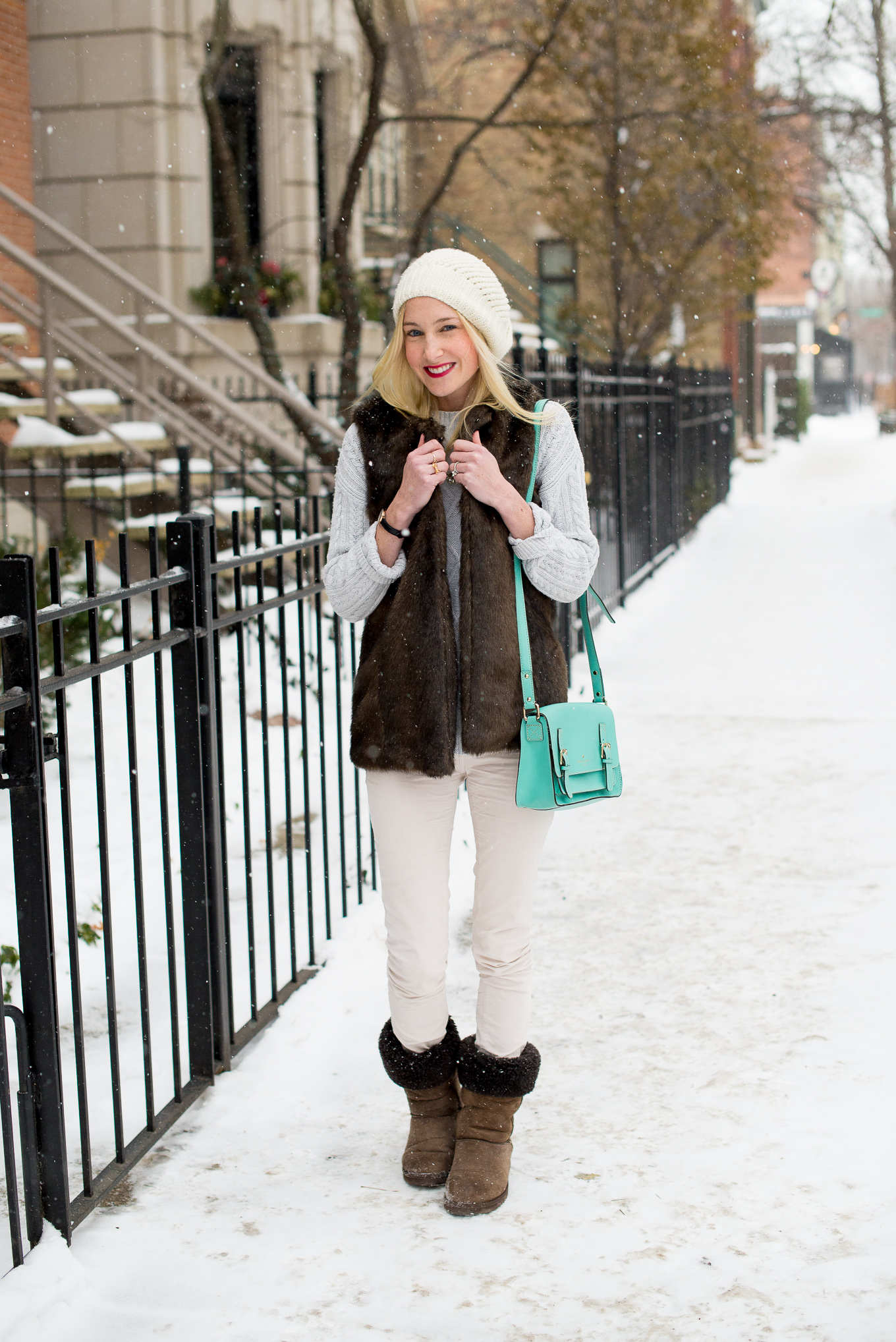 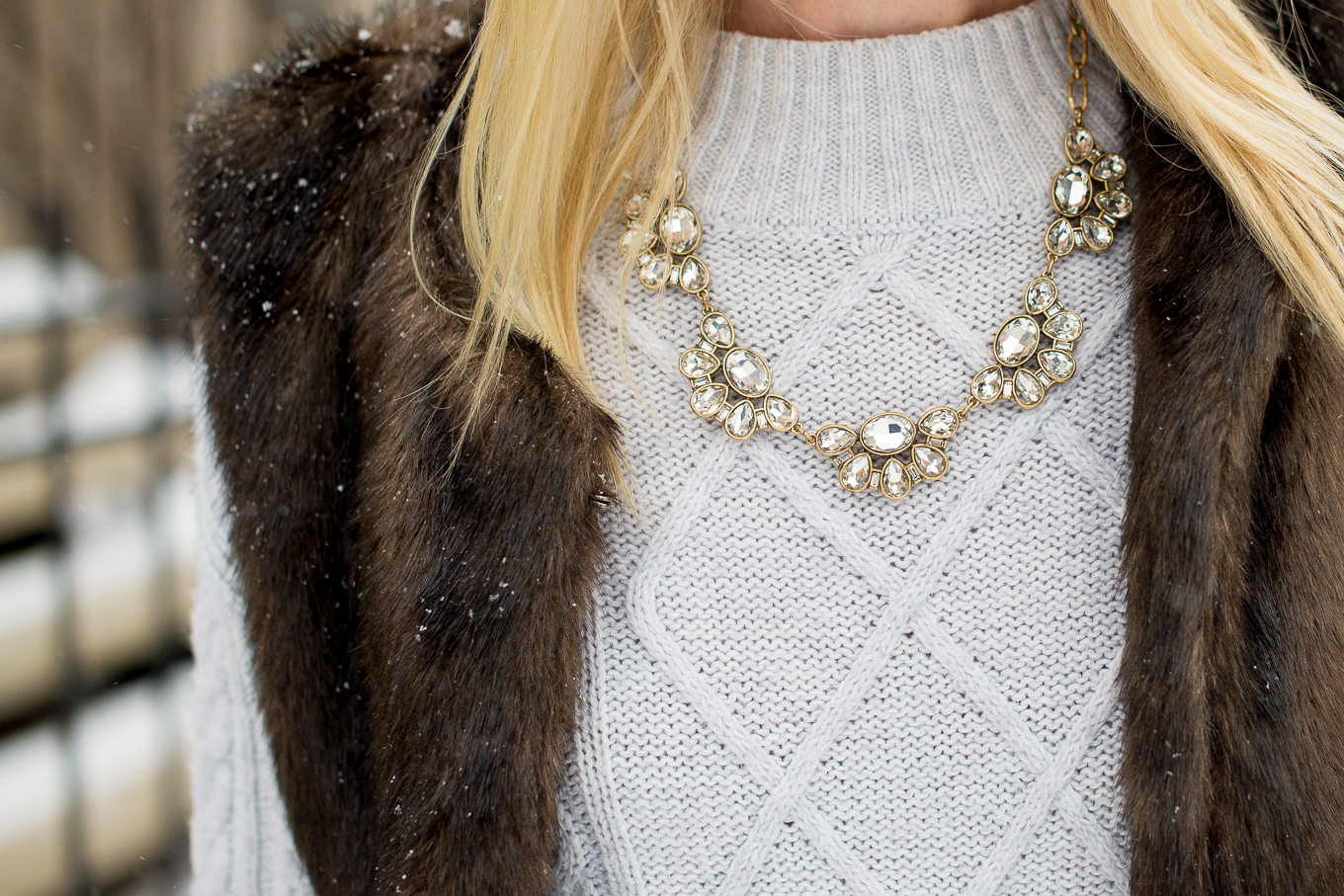 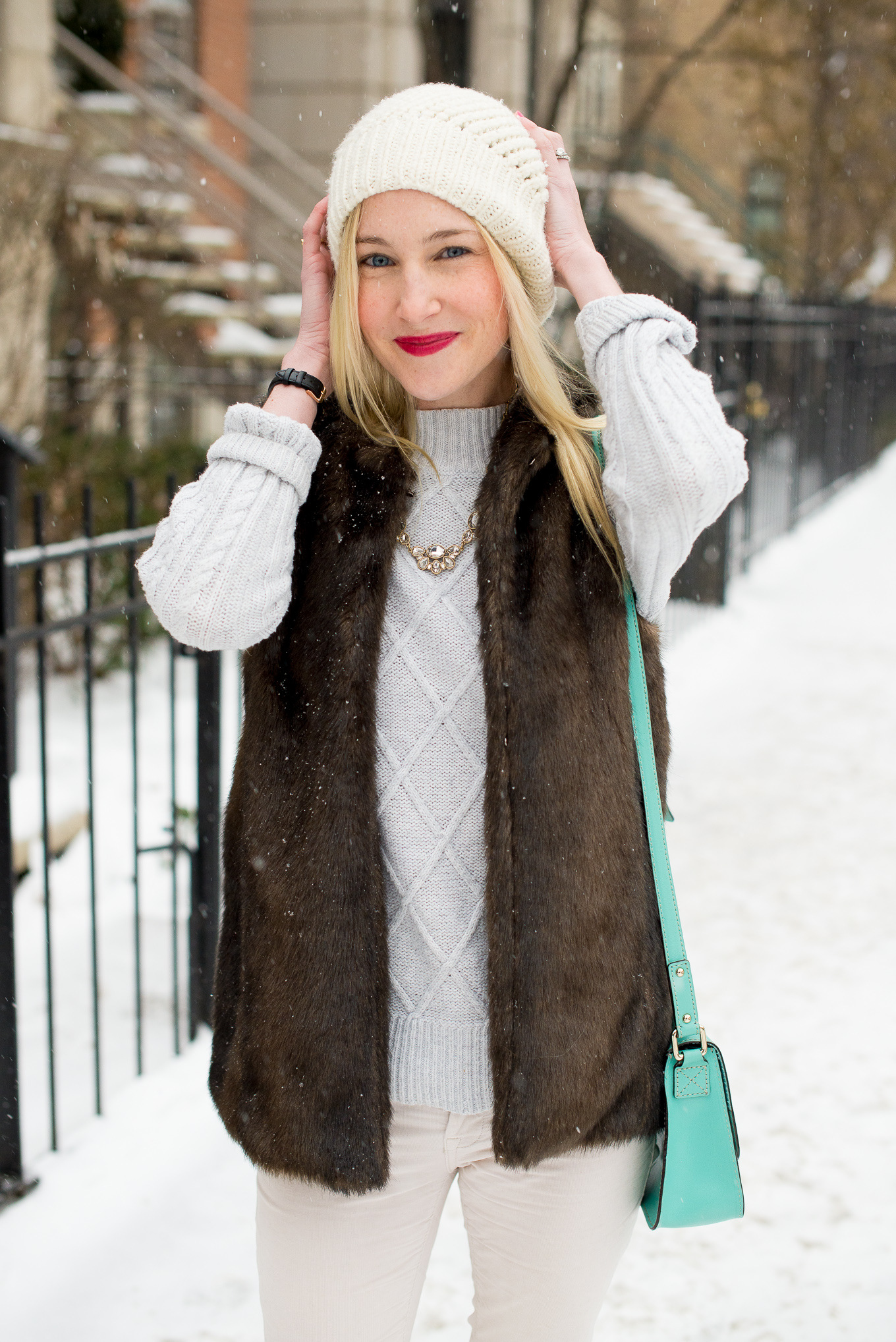 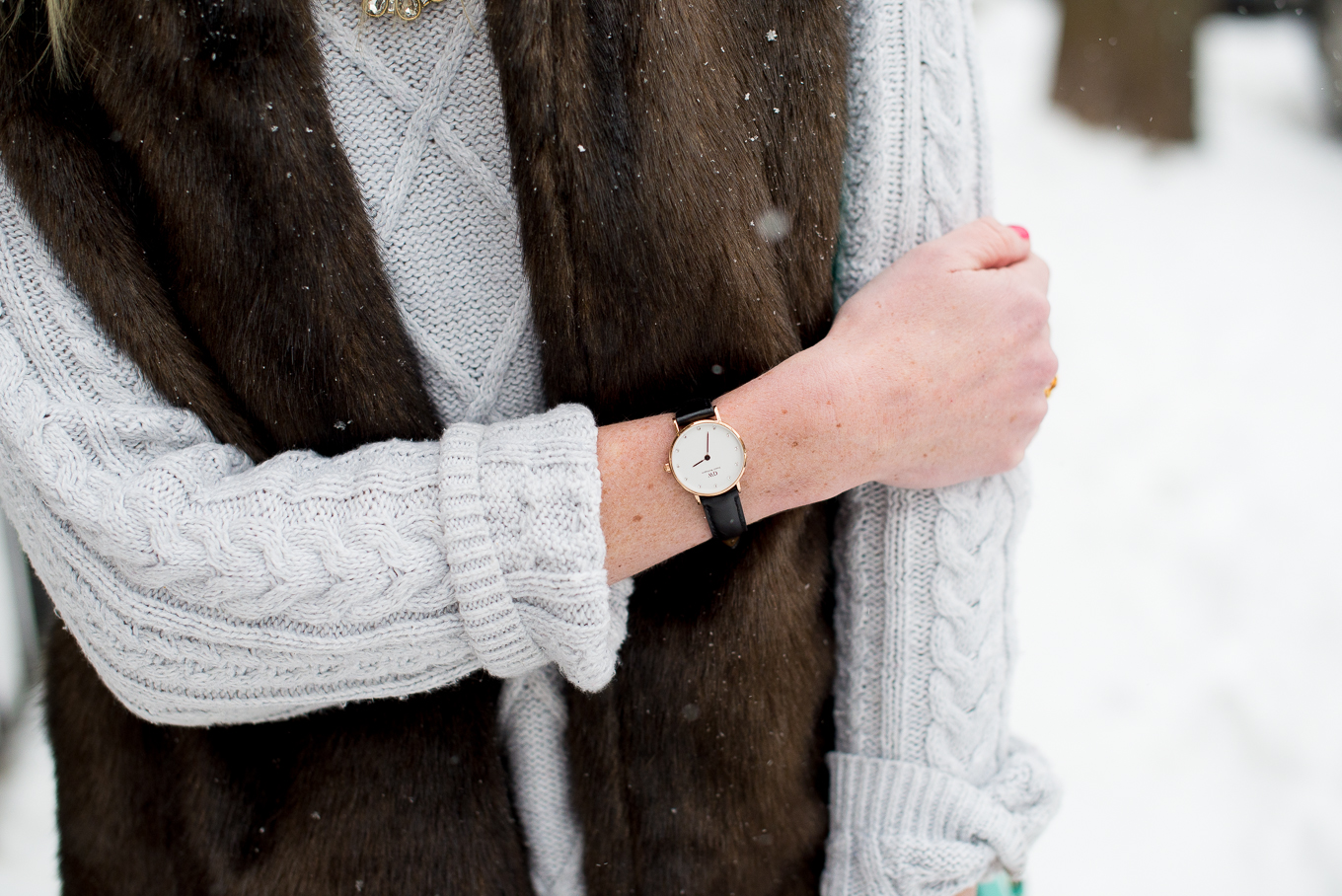 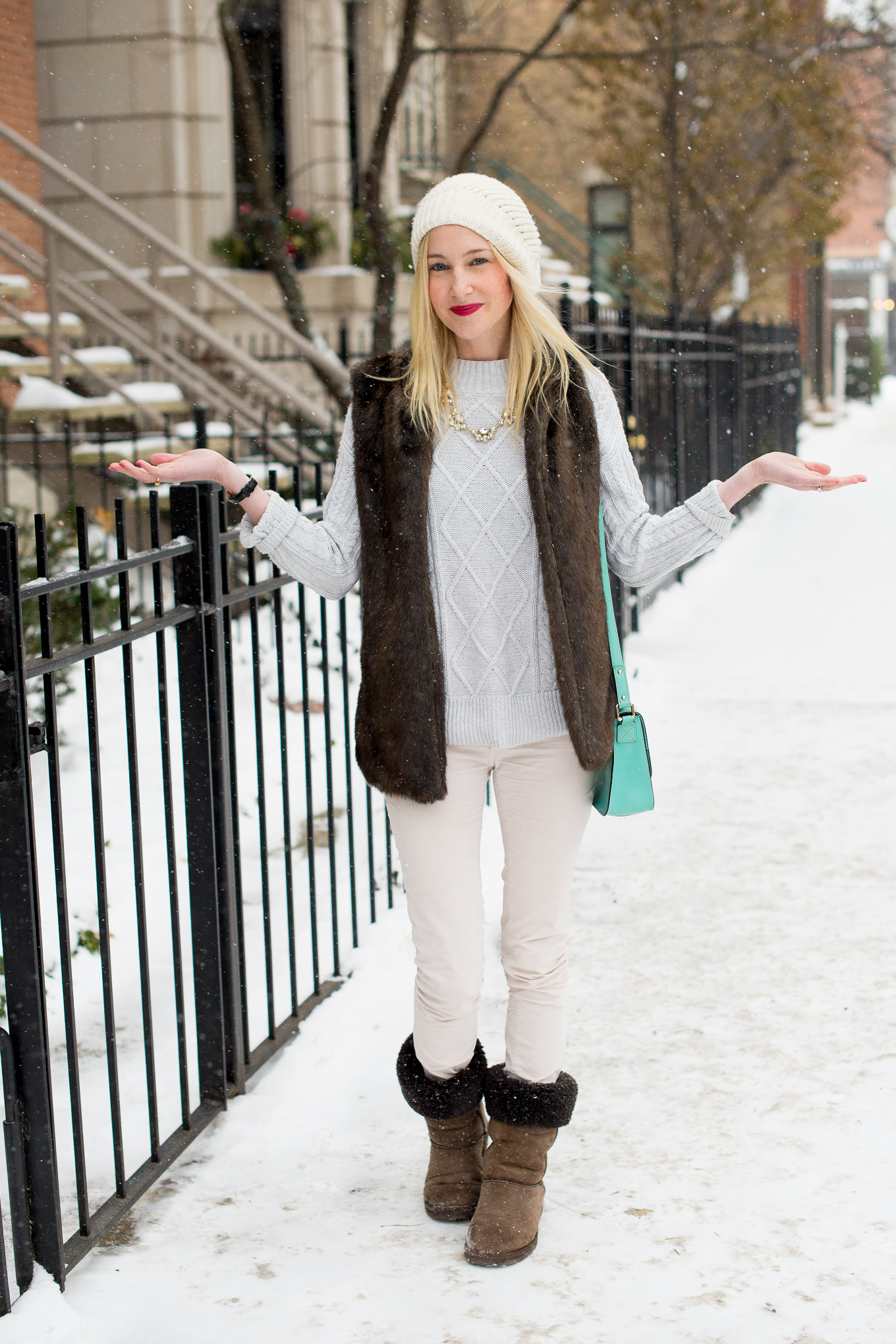 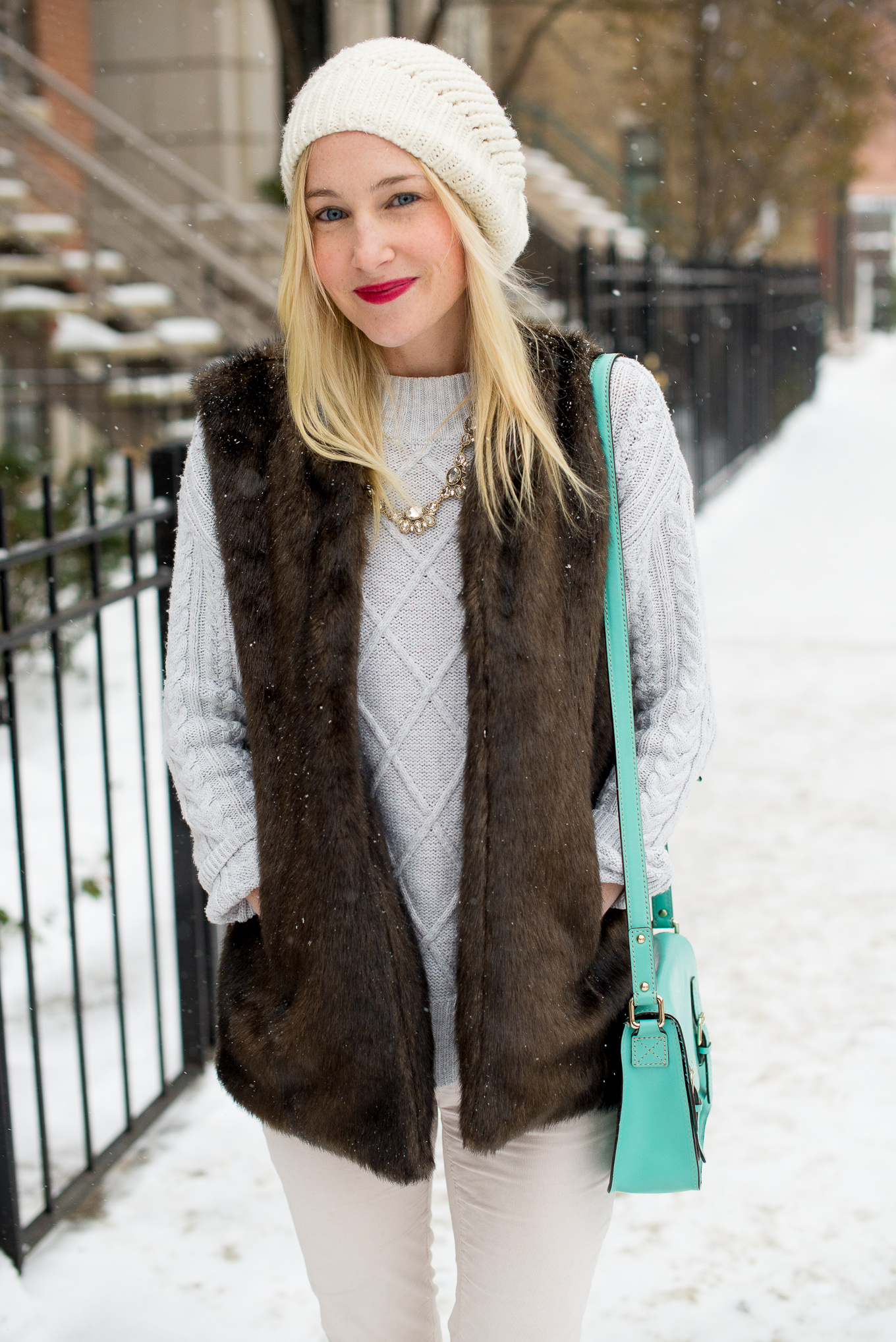 How to Take Fashion Blog Photos in Winter

View all posts in:
Guides and Reviews, Kelly in the City, Outfits, Style, Winter
Share this post: 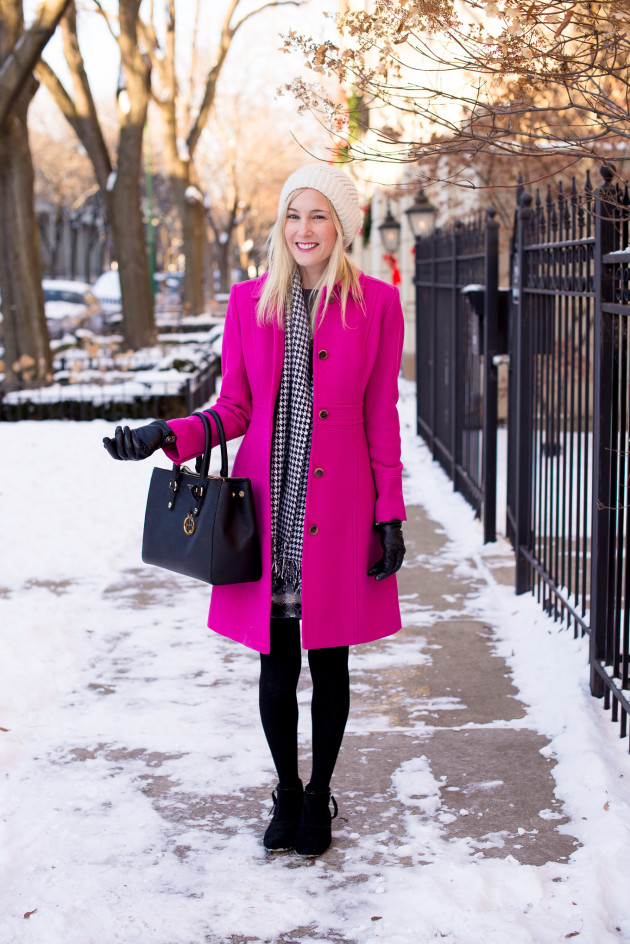