Absolutely incredible. But a foot nightmare for any Girl Girl. Vince Camuto, couldn’t you just make all of your shoes in 3-inch versions? :)

I spent my first six years in New York City trying to convince myself that my outfits looked cuter with flats. Why? Because my feet killed after walking no more than eight city blocks in the wretched things. Besides, I was destroying them pretty quickly. Good shoes are expensive! I’m certainly not one to skimp when it comes to what I put on my feet, but seriously? Three to four months was simply not an acceptable lifespan. I also couldn’t keep up with anyone. Ever walked with a guy down a bustling city street? Even if you’re not wearing four-inch heels, it’s a bit of a challenge to keep up with him. When I was by myself, I’d often find myself slinking into the subway or hailing a cab just to protect my weary feet. It was expensive, and far less enjoyable than walking!

I was sad. “It’s not fair,” I said to myself as I threw all of my shoes up on the highest shelf of my closet, essentially never to be seen again. I would look at the other girls at the bars—so stylish in their adorable pumps—and wonder how they did it. They either had extraordinary tolerances for pain, or their feet were just far sturdier than mine. It wasn’t that I wanted to wear the pumps to impress guys–heck, lots of guys, like my fiancé, for example, prefer girls in flats! I wanted to wear the shoes for myself. Sometimes I just wanted to get dressed up. Feel fancy. Alas.

I wont’ share photographic evidence of my mutilated feet the few times I decided to rough it in pumps in Manhattan simply because making my readers nauseous is not the goal here. ;) But I will share that over the last year, I’ve had a revelation:

1. Never go above three inches. Fine. Maybe three and a half if they’re just that cute. But never four. There’s just no need. You’ll be crying from the pain… or you’ll kill yourself while trying to get around. Yes. The vast majority of the most stylish pumps on the market are four inches, but that doesn’t mean you can’t find awesome three-inch heels. (Don’t be lazy! Search! It’s worth it.) If you must go four, wear them only to events in which you won’t have to do lots of walking. (I don’t know about you, but I’ve never been to an event in Manhattan that didn’t require walking!)

2. Suck it up a little. Heels will never be more comfortable than flats. Anyone who says they’re actually happier in pumps is straight-up lying to you. My pain tolerance is pretty low (God bless my fiancé when we one day have children!) but I need to be less of a baby. Girls suffer all the time for fashion. I can suffer a little, too. Once in a while. 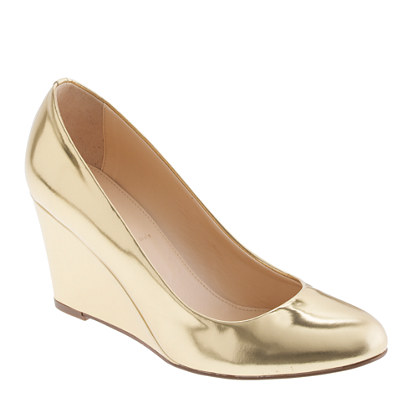 3. Wedges, wedges, wedges. I only discovered recently that wedges are the most amazing thing ever. They give you that extra height, elongate your legs, allow you to wear boyfriend jeans without looking frumpy, and dress up an outfit. Not only that, you won’t die while walking around the city! Are you going to make it eight miles? No. But will you be wincing in pain while spending a day or night out on the town? Probably not. Bring a few bandaids if you’ve never worn them before, but you’ll most likely be in the clear.

4. Bring flats that are easily transportable. (i.e., Bagllerina or the more affordable CitySlips) There are so many companies that make flats that fold up into these tiny little pouches that can easily fit into a clutch, as long as it’s not the size of a pincushion. Invest. For as little as $30, they’ll change your life. Who cares if you have to carry your pumps home at 3 a.m.? Seriously. No one will notice at that hour.

5. Cushion the heck out of those things. Like the transportable flats, there are an abundance of foot cushions on the market. THEY HELP SO MUCH. My favorites are Dr. Sholl’s “For Her” “Ball of Foot” cushion. They’re about six bucks, and make the world of a difference. Target also carries a brand—Fab Feet—that is cheap and spectacular. Put them everywhere… even on the backs of your shoes. They prevent slippage and bloody messes from shoes that have yet to be broken in.

6. Don’t skimp. It’s not a coincidence that cheap heels tend to be more damaging. I know that paying more than fifty bucks can be painful for a pair of shoes, but do it. Don’t do it frequently, and certainly utilize coupon codes and sales so you don’t get taken to the cleaners. But no more of the $19.99 pumps from Payless. Unless they’re Payless Dexter Pumps. Most comfortable shoes ever. (Only exception. ;))

7. Do your research. Read the reviews. We’re in this amazing era in which the Internet exists. Use it! There’s a review for pretty much everything out there, and girls are quick to share their two cents on what they put on their feet. Value your fellow sisters’ opinions, and try to figure out what the majority of owners think about the heels you’re considering. If several girls say the pumps bloodified their feet, run.

8. Bring baindaids. They’re tiny. No matter how small your purse or how skimpy your dress, you can find a spot to tuck a couple of bandaids away in. You’ll thank yourself later.

9. Talk them off when you can. If you’re walking alone to an event, why wear the pumps that could potentially be your night’s downfall? Carry them! Wear those foldable flats I was telling you about before. Slip on the heels a block or two before you get to your destination. It’ll save you major foot time.

10. Buy the correct size. I can’t tell you how many times I’ve purchased a pair of heels that didn’t fit. I’ve been under the impression for years that I’m a size 7.5, always. Not the case. While I do often wear a 7.5 in flats, I almost never wear the same size in pumps. Why? The foot naturally slides forward a bit in heels. If you’re slipping out of the backs of your shoes, you’ll suffer more foot damage. Now, I almost always purchase a size 7 in pumps. Believe me: having the correct size makes a huge difference. My feet are still thanking me! 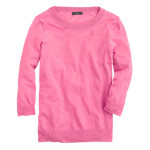