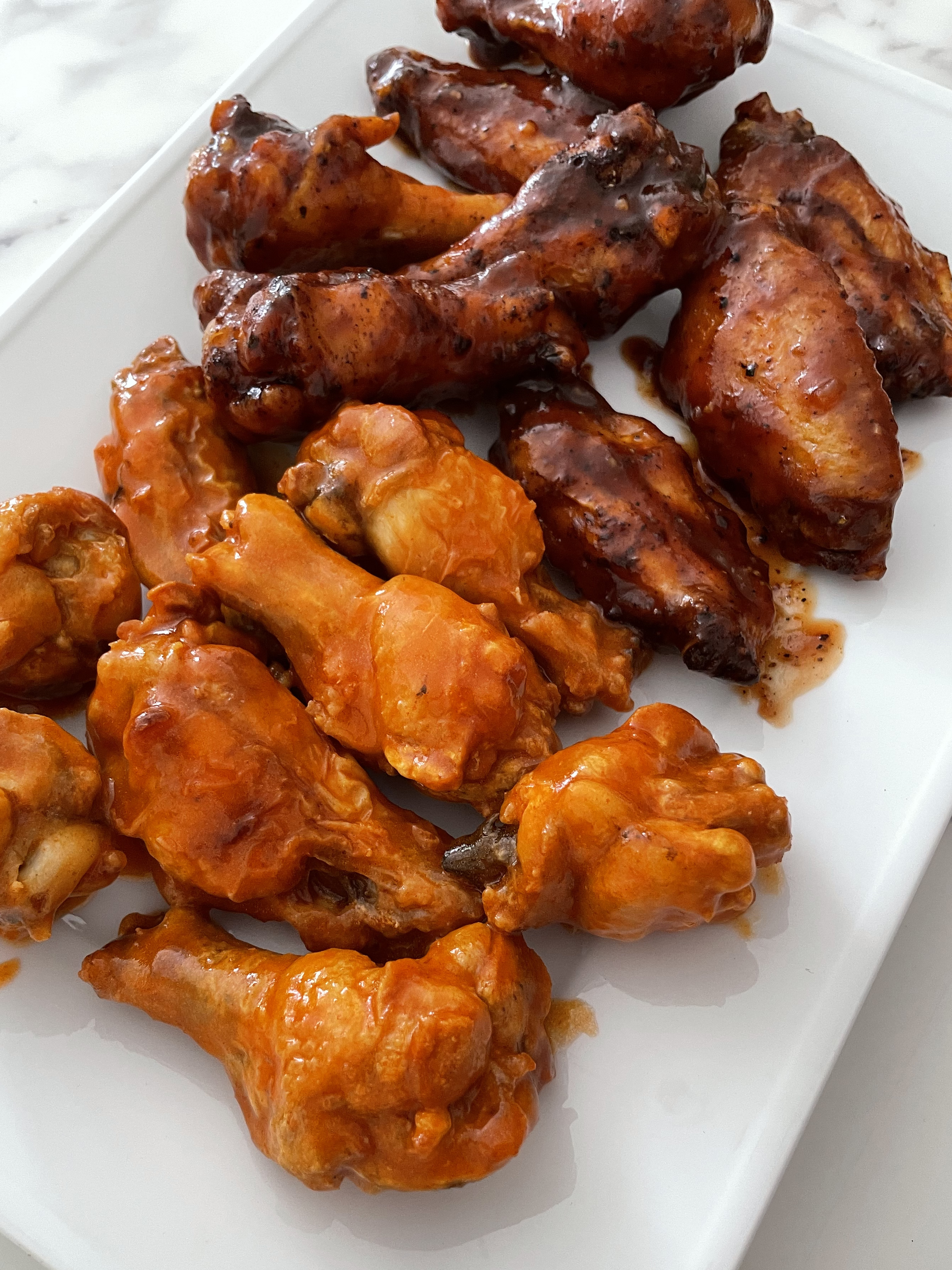 Chicken wings are my favorite food. I’m that guy who orders wings as an entree and doesn’t share with anyone—and I do it often. I love wings so much I even know that the two different wing varieties are called drumette and wingette.

Did you know that?

To fry or not to fry

I spent much of the last year figuring out how to deep fry food without infuriating my wife… and I failed. I tried a giant turkey fryer for Thanksgiving (disaster; nearly caught the garage on fire); an electric skillet (burned myself, not fun); and a dutch oven on the stove (huge mess, stunk up the house for days). And then I gave up on frying for good. That is until we got an air fryer.

Air fryers aren’t fryers, really. They’re countertop convection ovens that work by rapidly swirling heated air around to cook and brown food. The result is quickly crispified food with little mess. I spent most of the last decade making fun of people and their air fryers… but now I need to publicly admit that I was wrong and that air fryers are totally dope. This thing makes no mess, cooks delicious food quickly, and makes my wife happy. I’m back in the frying game y’all!

Air fryers can handle frozen chicken wings with ease. Deep-frying frozen wings, on the other hand, can result in undercooked chicken, scalding burns and grease fires: not ideal. So air-frying it is!

To start, place 2-3 pounds of frozen wings in the air fryer basket, trying as best you can to separate and spread them around. (Note that this recipe uses a basket-style air fryer, not the toaster oven or pressure cooker variety.) Next, air fry the frozen wings for 20 minutes at 400 degrees. Feel free to pop that air fryer open and shake the wings around a bit. It doesn’t do anything but it sure is fun.

After 20 minutes, the wings will be totally thawed and partially cooked. Use tongs to move the wings to a large bowl for seasoning, taking care not to burn yourself. Discard the disgusting chicken grease boiling in the bottom of the air fryer drawer. Season the wings with your preferred seasoning. I usually coat BBQ wings with a BBQ rub at this stage, use salt and pepper for plain wings, and do nothing if I’m doing buffalo wings.

Place the wings back in the air fryer for another 20 minutes at 400 degrees to fully cook and crisp them. I encourage you to shake them up in the basket during this stage so you can feel like you’re doing something. Remove the wings when you feel like they’re your optimal level of crisp.

Place the wings in a large clean bowl for the saucing stage. I use about a cup of Sweet Baby Ray’s BBQ or 1/2 cup of Frank’s Red Hot Sauce with 1/3 cup of melted butter for buffalo wings. After you’re fully sauced, take the extra step to pile those wings on a fancy plate and toss the air fryer basket in the dishwasher. You did good work today, and deserve a nice clean kitchen to devour those wings in. 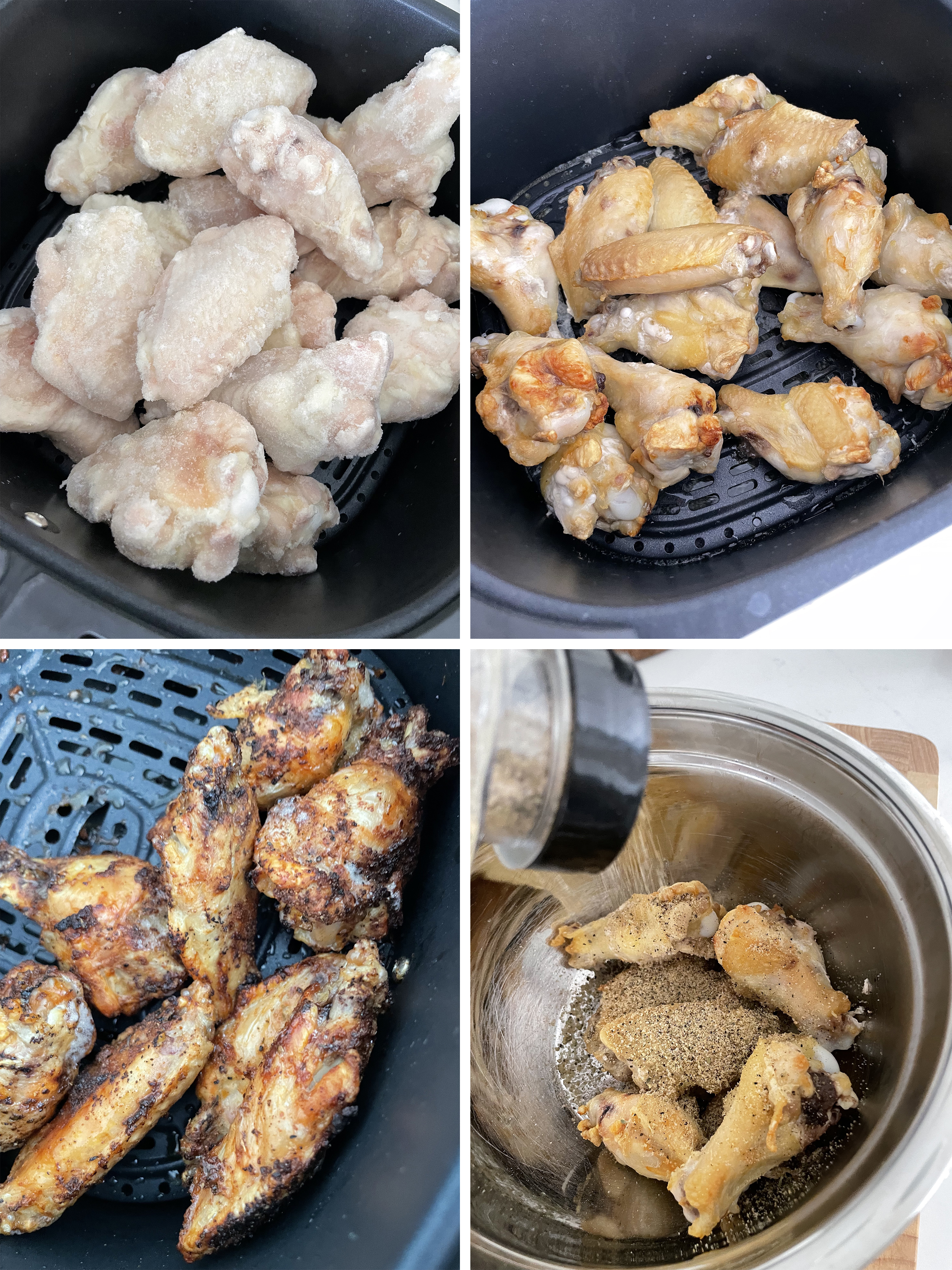