Why Dad’s Boat Means So Much 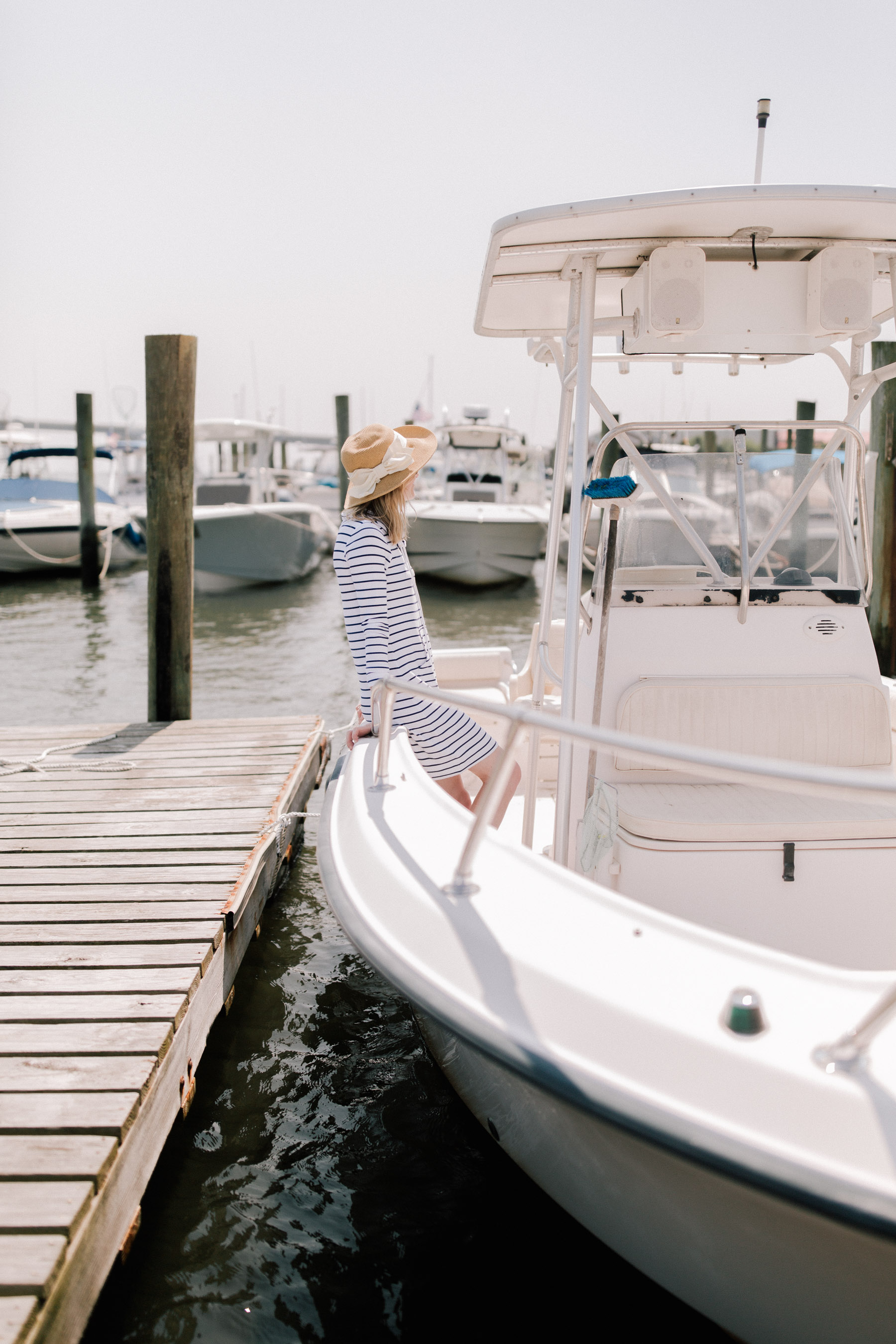 Lilly Pulitzer UPF 50+ Hillary Dress c/o / Monogrammed Jack Rogers Sandals (I also love the solid white and champagne colors.) / L.L.Bean Tote c/o (It was a gift from the brand, so don’t judge me too much with the IG handle, haha. Size Large, which fits under a plane seat, with the regular straps. But I recently ordered another one with the longer straps so it’s easier to carry.) / Tuckernuck Packable Hat

Did you see last night’s post? It went up VERY late, but it’s all about the upcoming Lilly Pulitzer After Party Sale, and it includes an awesome chance to win $100 to shop the sale!

This post is a little random, and the photos that accompany it don’t do the topic justice. But lately I’ve been thinking about one of my biggest flaws as a blogger: that I tend to write about nonsense, like the weather or whether I’m tired. (Yawn.) Sometimes I’ll provide recaps of what I was doing when photos were taken, but I rarely write about what I want to write about. Like, I’ll be standing in the shower–and this happens on a fairly regular basis–thinking about how excited I am to put pen to paper… and then I never do it. My ideas and thoughts fizzle out throughout the course of the day, and I just end up doing the same old, same old when the time comes to put up the following day’s post.

I’m not sure why I struggle with this so much. I’m also not sure why I feel SO INSPIRED in the shower yet the minute I step out, I feel overwhelmed and unable to accomplish what I know I can accomplish. Do you ever feel this way? Do we think I should simply bring my laptop into the shower and do all my work from there?! For the blog, at least, I think I never let my ideas come to true fruition because I worry that they don’t warrant full posts. Or that they’ll come across as being inconsistent and erratic or that they won’t contribute to a narrative of sorts.

But that’s silly. I mean, at the moment, is this blog actually creating an easy-to-follow narrative that’s giving you a full picture of who I am and what my life is like?! Heck no. So there’s that. I think I just need to start being okay with hitting publish on posts that are different; on posts about little things that perhaps represent bigger ideas–even though I can’t spend a month re-reading them ad nauseam, “perfecting” them.

So here we go with that!

These photos were taken last month, when we were spending a week with my immediate family in Ocean City. In case you missed it, btw, here’s a recent post I wrote about them. While I blog about Mitch and Emma all the time, I realized that you likely don’t know much about the Sheehan Crew. Hope you enjoy reading about them!

On this particular Shore day, I wore this dress, and the pics were snapped with the intention of eventually publishing a post about said dress. I’ll admit that I do love it. It’s really soft, it’s designed to protect you from the sun (UPF 50+), and that drawstring cowl neck is the cutest. I also think it’s going to be included in the upcoming Lilly Pulitzer After Party Sale since it was recently pulled from the site. (Did you see last night’s post? I’m talking about when I think the sale will occur, providing my best tips for shopping it, and giving away a $100 Lilly gift card!) So be on the lookout.

But while I was laying the post out and linking everything, all I could think about was Dad’s boat. I’ll preface this by saying that we come from humble beginnings. :) We were a military family for several years, and life wasn’t easy for my parents for a while there. I love that they worked tremendously hard, made big sacrifices for the betterment of their family, and instilled a strong work ethic in us. As you can see, the boat is small… and it dates back to the 90s. But Dad’s taken very, very good care of it, and it looks just like it did on the day be bought it.

I remember that day so clearly. Do you guys watch “This is Us”? It was kind of like when Jack bought the Wagoneer for his family. We were all in shock, and couldn’t believe that we were going to be sailors. 😂 Everything about it was perfect. I loved the gorgeous white cushions; the fact that someone could always sit next to Dad and be his co-captain; and how we could cruise down the Delaware River that ran past our house, seeing life from a completely different perspective.

I also remember thinking that if worked hard, I might be able to have something like Dad’s boat one day. No, my passion wasn’t boating. Still isn’t. And even now, I’m not sure what that “something” would be for me. Maybe the ability to take time off? Or a home by the water. Or a restored navy Volkswagen Cabriolet with light tan leather seats, from the early 90s with that boxy look… because that’s my dream car, haha.

But it wasn’t even about material things. When I looked at the boat, I felt this indescribable pride for what my parents had accomplished. They’d left the Air Force, left upstate New York and Long Island. They’d left everything they knew and created a new life and took on new jobs and careers to create this incredible life for their children and themselves–and it worked. The boat represented all of that.

Here’s the thing about “This is Us.”

Sometimes, it’s way too much. Randall with his metaphors? That’s kind of me right now. ;) So I’m stopping with the emotional boat stuff.

I’ll say, though, that we had a really fun time on that thing for a very long time. So many fun family nights on the Delaware River–an excuse to be together, even when we were older and interested in being with our friends on the weekends. We lounged, water-skied, jammed out to music, inner-tubed, fished, and did other water-related activities that I’m now forgetting. One year, for Dad’s birthday, the kids even hired some guy to paint “Chris’ Crew” on the boat’s side. (It came out great, thank god. Could’ve been a huge disaster.) And years down the road, when my parents’ dream of owning a home on the beach came true, the boat was re-docked on the Jersey Shore, and it did the exact same thing: it brought us together. JK about stopping with the emotional stuff. I’m regressing to my inner Randall, I know…

The first time I brought Mitch “home,” I brought him to Ocean City. And my parents, of course, wanted to bring him out on the boat. It was a great day. But I’ll have it be known that Mitch was the one who started the Ocean City Fishing Curse. Before that day, people caught 90 percent more fish while out on the bay and ocean. Now? Zilch. Everyone blames Mitch, haha. He’s taken it well. ;)

Last year, Dad called and asked how I felt about him selling the boat. He said that now that we were all grown, it was getting used less and less, and he wasn’t sure if it was worth keeping. Part of me wanted yell, “HOW COULD YOU SELL THE BOAT?! IT’S BEEN WITH US FOREVER! IT’S OUR WAGONEER!” But another part of me wasn’t a complete brat, and totally understood. I’d sold my first (and only) car, after all, even though it’d been with me through emotional and transitional times; times of vulnerability and times of growth. (And times of speeding tickets and crashes, if I’m being honest. Never get into a car with me. I never should have been issued a license.) At the end of the day, it was just a car… and this was just a boat. No sense in keeping something that required maintenance and dollars if it wasn’t being used.

In the end, Dad decided to keep it for another couple of years on account of grandchildren. And as luck would have it, Emma cried for the entirety of her first boat ride. 🙈 Wasn’t a fan, but who knows? Maybe it’ll be like her relationship with grass: A terrified City Kid at first who’s come to love nothing more than running through it, bare feet and all.

I have a feeling, though, that the boat will soon move on to new owners; perhaps to a family much like ours was back in the day. And that would be great. Like I said, we don’t need it, just like I don’t need that restored navy Volkswagen Cabriolet with light tan leather seats from the early 90s with that awesome boxy look. We’re still a crew without “Chris’ Crew,” and let’s be serious: we haven’t caught any fish since 2009 when Mitch came on the scene, anyway.

Anyone else love this childhood book growing up? 😂

Anyway, let me know if this is the kind of thing that you’d like to see more of on the blog. Or maybe you’d prefer something different?! Be honest, and I’d also love to hear if you can relate to this on any level. Whether it’s a struggle to bring ideas to fruition or something resembling the Sheehan Family Boat that yields similar emotions, tell me about it!

And with that, happy Friday, Friends. ❤️ 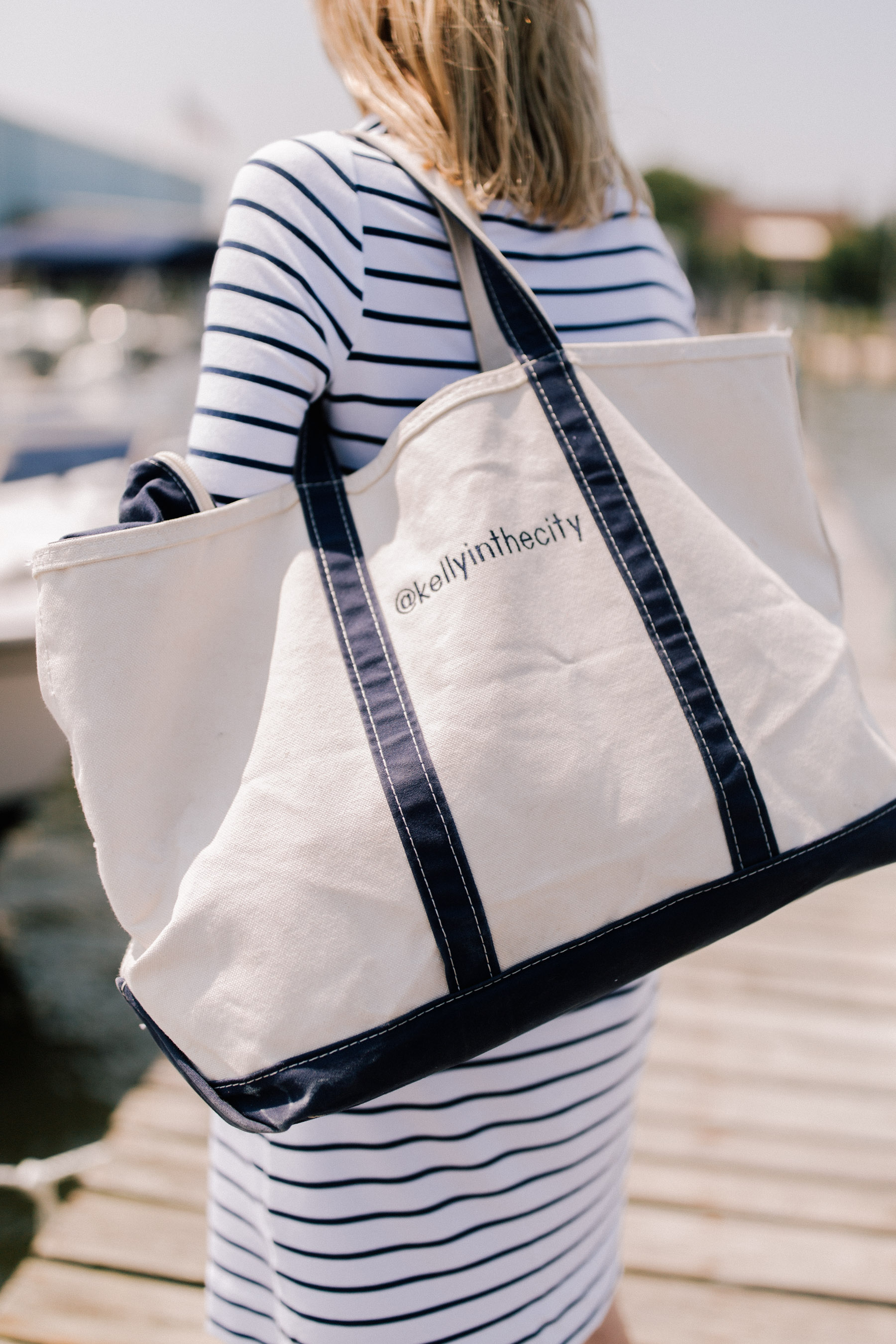 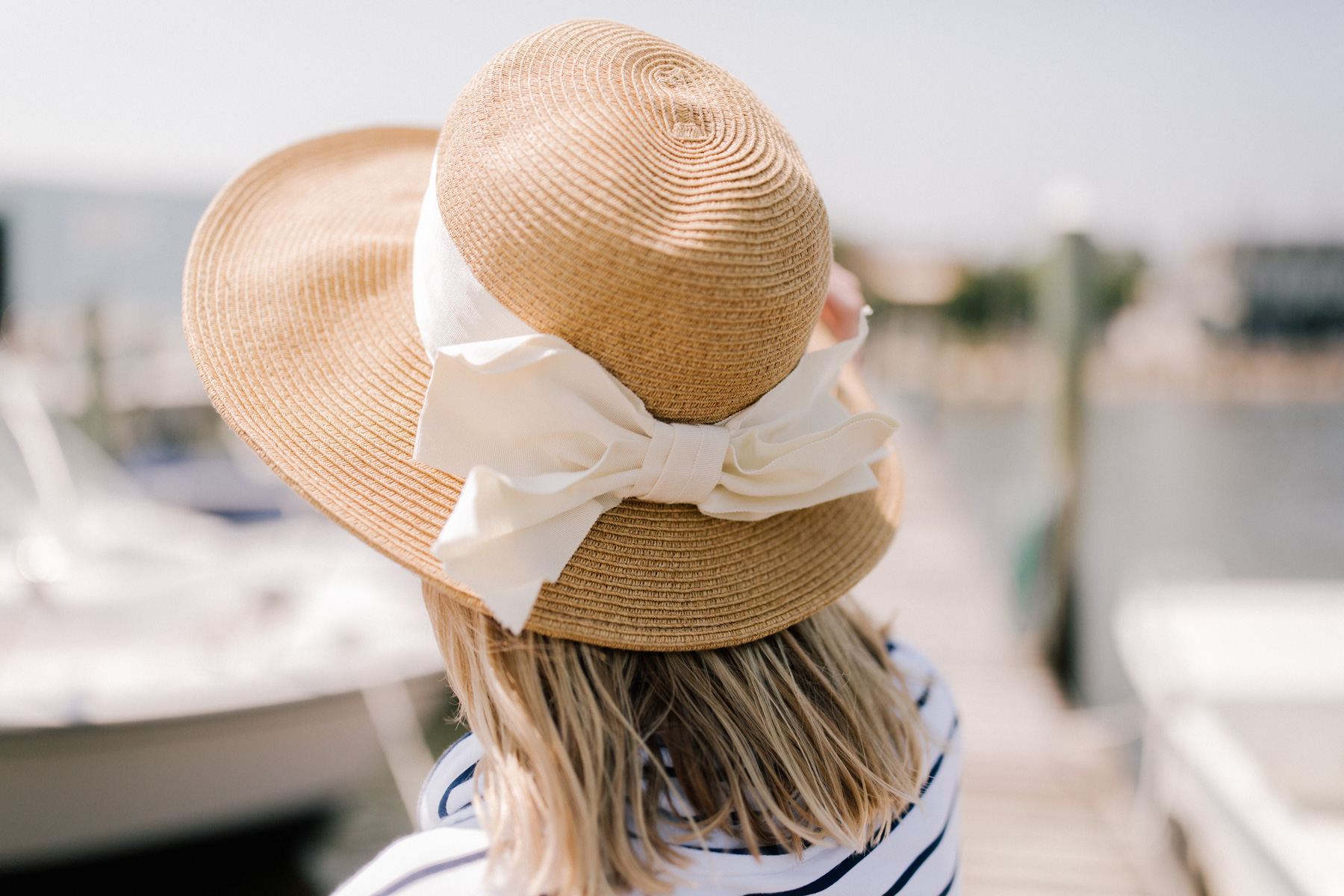 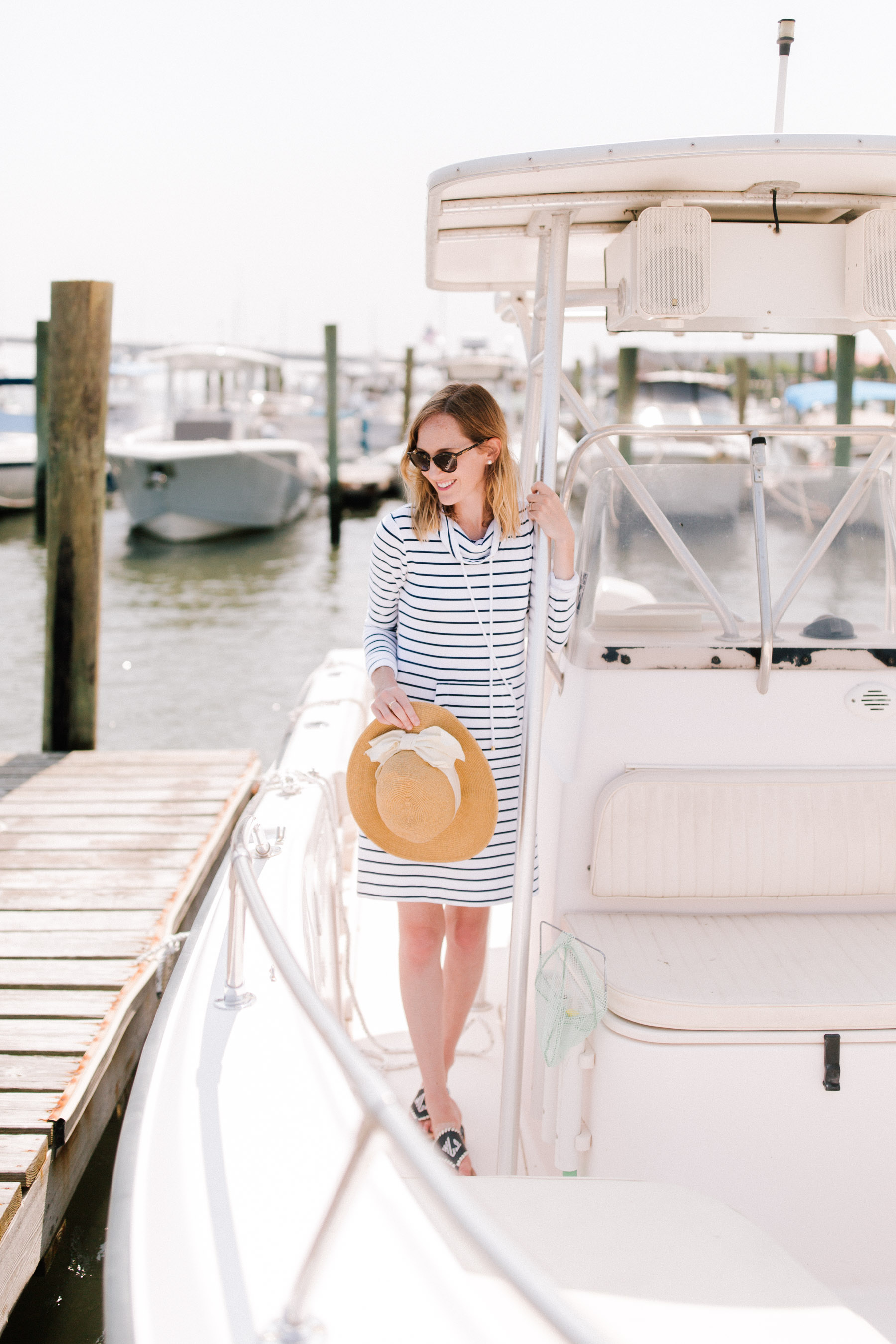 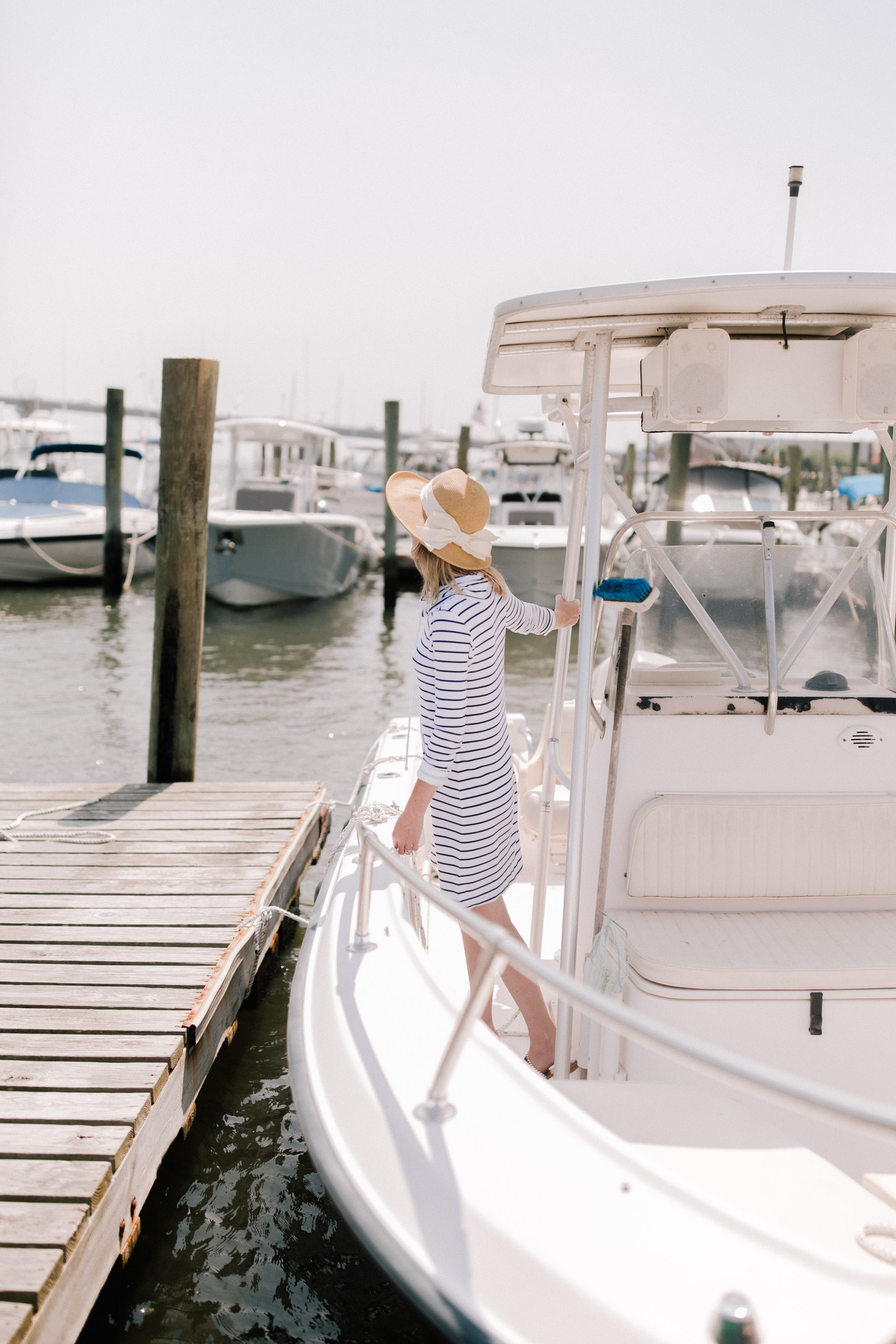 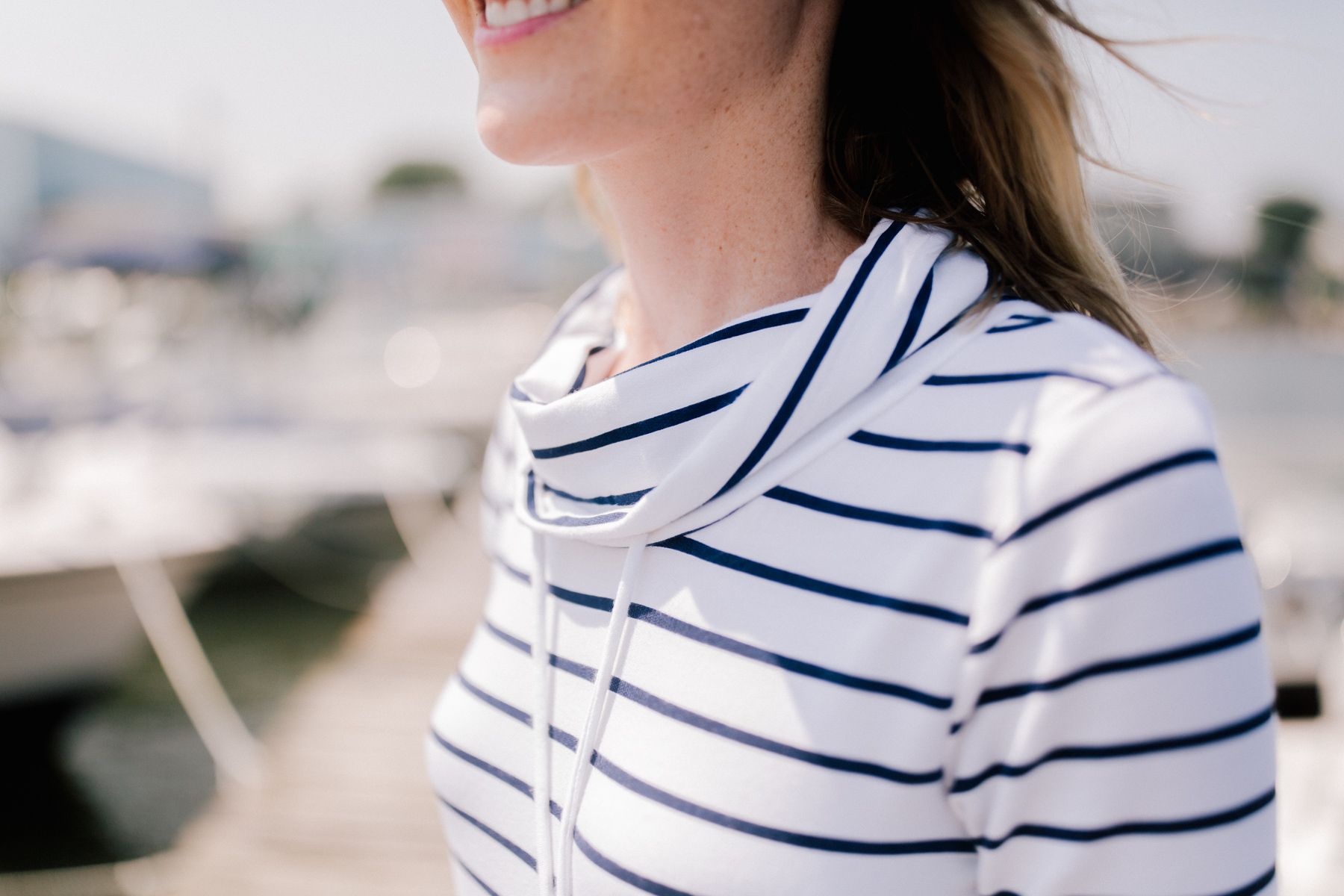 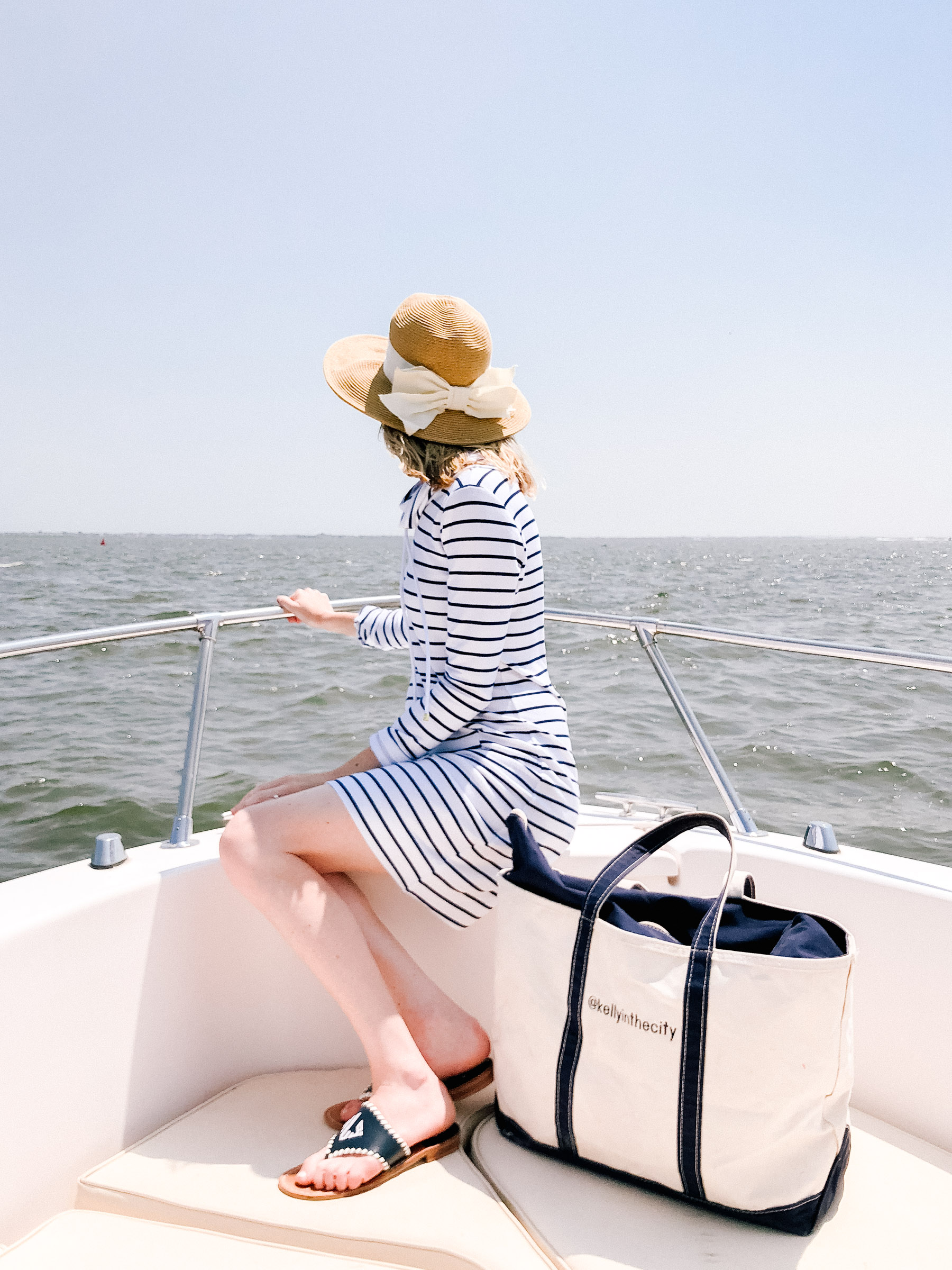 Lilly Pulitzer Dress c/o / Monogrammed Jack Rogers Sandals (I also love the solid white and champagne colors.) / L.L.Bean Tote c/o (It was a gift from the brand, so don’t judge me too much with the IG handle, haha. Size Large, which fits under a plane seat, with the regular straps. But I recently ordered another one with the longer straps so it’s easier to carry.) / Tuckernuck Packable Hat

Did you see last night’s post? It went up VERY late, but it’s all about the upcoming Lilly Pulitzer After Party Sale, and it includes an awesome chance to win $100 to shop the sale! 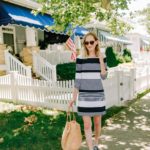 Previous Post:
When is the August 2018 Lilly Pulitzer After Party Summer Sale? +$100 Giveaway