I spend all day with a one-year-old and yet I was clueless as to what to get her for her birthday this year. Luckily, my wife and our extended families love this stuff and they spent weeks chatting about toys. (Yes, it was a great distraction, but again, they normally really enjoy toy shopping. Am I the only one who doesn’t get joy from children’s toys?! Kelly, for example, would 100-percent opt to visit a toy store above all other stores. I’m sorry, but what? 🤯)

Kelly and I tried not to go overboard with our own gifts, and decided to go with just one: these Climb and Crawl Blocks. They’re GREAT. Kelly said she likely wouldn’t have thought to get them were it not for the quarantine, but both girls adore the blocks and spend hours with them every day. They’ve been lifesaver–especially now.

And Emma’s gift to Lucy was her personal favorite baby toy. Babies love this thing because it involved sorting and music. (When you drop the pieces into the tubes, they make sounds… and then the babies can also blow on them like whistles. Riveting stuff here.) Kelly originally found the toy at a HomeGoods, and then she gave it to a Chicago friend once Emma grew out of it. Needless to say, she freaked when she was able to track it down again, haha. (So strange.)

Above are some other awesome gifts for one-year-olds. Our families sent Lucy some of them (thank you!), but most are just toys on Kelly’s “gift list.” 😂 So all I had to do to put this post together was grab Kelly’s phone. So easy. 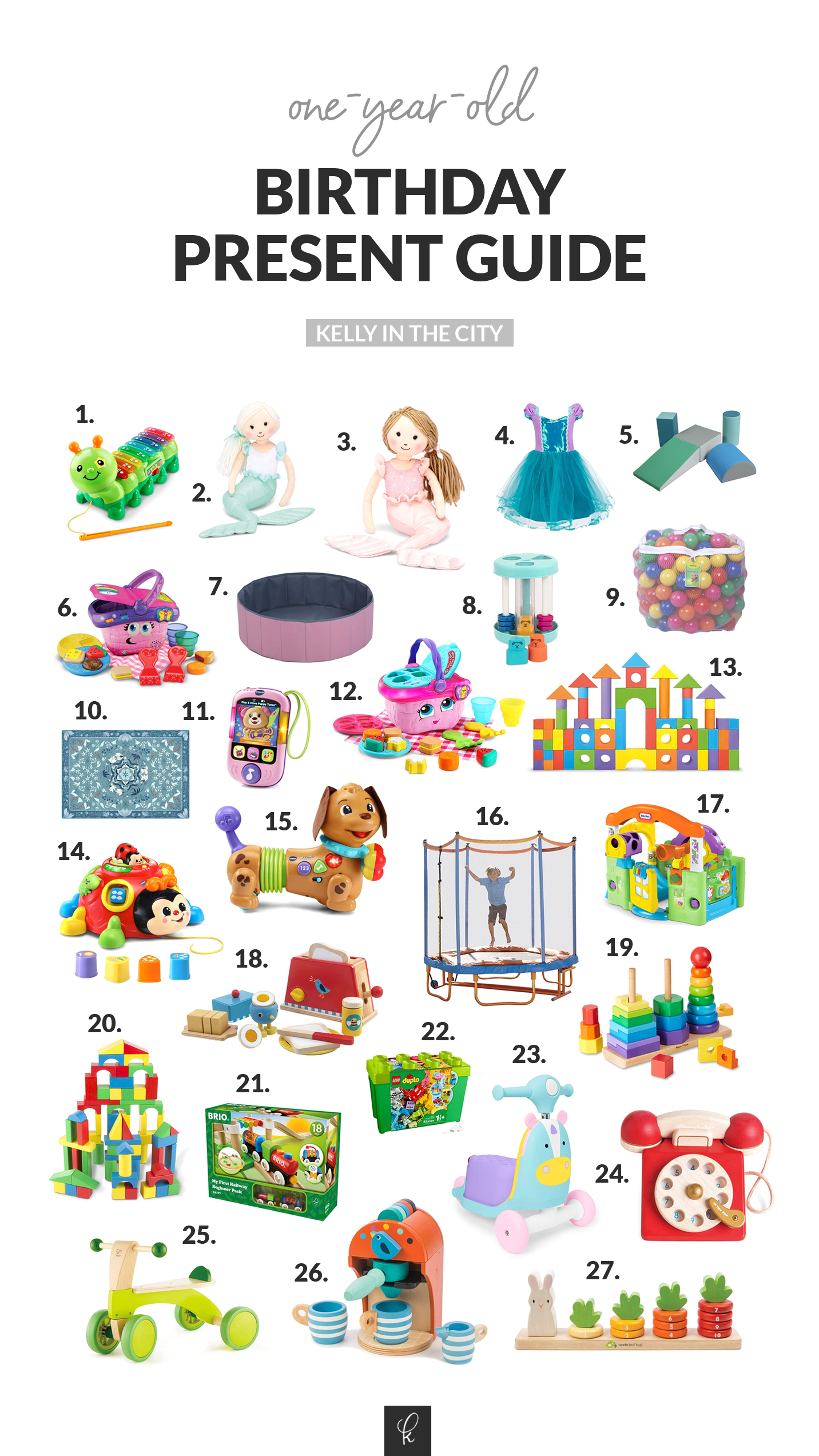 1. Zoo Jams Xylophone: This caterpillar is straight vibes. You can buy it for your kid, but you’ll be the one jamming to its beats late into the night. (I mostly like it because it doesn’t go off on its own at 11 p.m. when I’m watching TV like so many other stupid toys.)

2. Jellycat Shellbelle Maddie Mermaid: The Little Mermaid is a love story in which a sea creature violates the bounds of nature to dupe a human man with the help of an evil octopus who imprisons the souls of her enemies for eternity. Fun for the whole family!

3. Jellycat Shellbelle Millie Mermaid: And here she is as a brunette. Just think about mermaids for a second. What a strange thing for kids to be playing with. I just spent an hour reading about it on Wikipedia and apparently Christopher Columbus literally reported seeing mermaids while in the Caribbean.

4. Princess Mermaid Dress: We don’t even bother dressing the girls in traditional clothes anymore. It’s Amazon princess dresses from here on out. Why fight it?

5. Climb and Crawl Blocks: To reiterate, this is the best gift in the guide. Granted, I have no basement now; it’s just a pile of these blocks. But a few days in, they’re actually getting played with–which is more than I can say for most of this crap.

6. Shapes and Sharing Picnic Basket: Shapes and sharing are what it all boils down to for a one-year-old and this picnic basket has them both covered. Emma loves it too; it’s very cute to see them playing together.

7. Ball Pit: I had one of these in my dorm room. It’s really a toy for all ages.

8. Sound Puzzle Box: This is the toy I was talking about before. The puzzle shapes make a funny whistle sound as they fall through the tube which is fun, but our girls both independently decided to shove the pieces in their mouths and play them like French horns. I’m curious to hear if your kids do the same.

10. Little Nomad Everly Play Mat: The Jardin Everly Mat is Lucy’s favorite thing. She sits on it and screams and dances. I’m not sure what’s up with that kid. It’s also awesome because you can wipe it down, unlike rugs which are permanently damaged once our kids step onto them.

11. Puppy Tunes Play Phone: No toy will ever match your child’s obsession with your phone. It doesn’t matter how hard you try. But you still have to try.

12. Shapes and Sharing Picnic Basket: This is the second play picnic basket on the list just in case your kid is better at the shapes than the sharing. (Kelly just informed me that these two toys are the same thing. I screwed up. Moving on.)

13. Foam Building Blocks: The best part about this block set is that they make your house feel super messy and cluttered all the time. Highly recommend if you don’t already feel like your life is spiraling out of control.

14. VTech Crazy Legs Learning Bug: VTech makes some of the most annoying toys on the planet and this Learning Bug is no exception. Lucy loves it.

16. Fold-Up Trampoline: While not meant for a one-year-old, this thing is basically a giant backyard playpen and it’s given us tens of minutes of serenity. Lucy’s a huge fan. Despite all that, I cannot in good faith recommend it. It took us nearly six hours to put together and I almost smashed it. (Here’s the blog post that Kelly wrote on the trampoline.)

17. Little Tikes Activity Garden: This delightful pile of plastic also took nearly four hours to put together and, ultimately, placed an undue burden on our marriage. But we keep it on the deck and use it as an outside toy and it’s pretty nice. You can unfold it into different configurations as the kid grows, too.

18. Toaster & Egg Play Set: If you’re asking  yourself whether kids would enjoy playing with imaginary toast, the answer is–apparently–yes! Here’s a whole post that Kelly wrote on the toaster. (?)

19. Melissa & Doug Geometric Stacker: You and I both know that the only person completing this puzzle will be Mom & Dad at the end of another incredibly long day.

21. Brio Train Set: As a #girldad, I’ll take any chance I can get to play with boy toys. Even though these trains almost exclusively service Arendelle Central Station.

22. Giant Box of Duplos: Pound for pound, Duplos are my girls’ favorite toys. They’re good for both building princess castles and for chewing practice. But, most importantly, a Duplo hurts far less when stepped on than traditional Legos.

23. Skip Hop 3-in-1 Scooter: Phrases like “3-in-1” strike fear in the heart of a parent who’s been putting toys together for years, but this one was a cinch.

24. Wooden Vintage Phone: Would a kid even recognize this as a phone? Does it even matter? Probably not!

25. Hape Scoot Bike: What can you really say about a wooden scooter?

26. Toy Espresso Machine: Thanks to Emma and Lucy, my espresso consumption is at an all-time high. This toy can bring the parenting caffeination journey full circle.

27. Carrot Stacker: This toy is a wooden bunny with a series of colored wood rings meant to resemble an unharvested carrot plant. 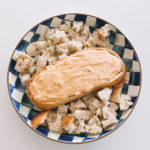