What is it with babies and stairs? Kelly I spent the last four years buying toys for our children and all they want to do is play on the stairs. It’s infuriating. It’s also unbelievably dangerous.

Our house basically all stairs. We live on a “short lot” here in Chicago, so the house “goes up,” and not back like most other homes. It’s a great workout (and it’ll actually will work very well for our family in the near future), but it’s terrifying at the moment with our resident one-year-old daredevil Lucy Larkin around. To top it all off, our stairs are weird, and there are no optimal places to secure store-bought baby gates because the walls simply don’t line up.

For the last eight months or so, though, we went through a zillion Amazon gates, determined to find a solution. Of course, none of them really worked. They may have, in fact, actually made the situation more dangerous, as Lucy often leaned on them and they weren’t 100-percent stable. Because of this, we resorted to blocking the stairs off with whatever random furniture we could find, which truly felt like the safest option at the time. The routine went like this:

NO WAY TO LIVE.

This is getting a bit long-winded, but the short of it is that one day, we realized that we were having nightmares and needed a real solution. Kelly found a custom baby gate installer through the NextDoor app on her phone almost immediately after the discussion, and the Home Safe Home Chicago owner Hal Normal was here the following week.

Hal—who will likely only learn about his blog today 🙈—does this whole thing right. First, he’s extremely personally and positive; he’s been doing this for years and it felt like my grandfather was over for a visit. Such a nice guy! Second, he’s whip-smart. His first visit took a little less than an hour, and in the end, he gave us a bunch of different solutions for us to choose from. He also really chatted things through with us and respected our concerns about the gates’ functionality (considering we have a four-year-old who would be opening and closing them), their appearance, and their price tags. He was honest about how we could save, too.

In that same first visit, we decided to go with the simplest option: three walnut-stained oak gates with minimal wall build-outs.

In terms of pricing, I don’t want to scare you if you’re in Chicago and considering going this route, because I 100-percent do think the gates are worth it. But I also want to be honest because this would be the part of the post I’d scroll to first. I’ll say that there are many more affordable options, including metal gates and wooden gates for standard staircases formats, in the $300 range. Ours, however, did amount to around $600 each (including installation) because of how strange our staircase is.

It was a lot of money, and it truly did pain me at the time. I went to bed sad that night, haha. That said, it’s the best money I think we’ve ever spent on a home. The safety improvement and peace of mind that comes along with having the gates makes them worth every penny, and they’re truly flawless.

(Remember: we tried so many other “pre-fab” gates. This was a last resort!)

Other questions? Let me know. 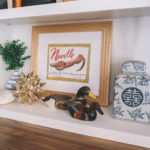