GUYS. J.Crew just came out with the cutest new arrivals, and so much of the stuff is available in navy gingham! BAH. I’m semi-heartbroken that I can’t wear most of it, so let me live vicariously through you, okay? 😂 (BTW: Use code “GOFORIT” to take 30 percent off your purchase no matter how much you spend or 40 percent off orders of $200+. Fabulous deal!)

Despite the fact that I’m several months away from being bump-less, here’s what’s in my cart:

I’m a huge fan of the J.Crew Sophie Blazer and wear mine constantly. (Certainly the most-worn blazer in my closet!) This is a no-brainer. So excited! (FYI: It runs big, so I’d size down.)

I can’t with this trench. SO CUTE. It’s a definite for me. I own the London Fog trench with the quilted liner since I’m such a wimp, but I don’t have a lighter one. The gingham, of course, did me in! I obviously love it in navy.

Okay, not a gingham piece, haha… and totally won’t be able to wear this top for a while. But I’ve been looking for something along these lines for SUCH a long time, so I think it’s worth the wait. I love it in white!

More non-gingham stuff. Sorry! Straying from the subject matter, haha. Love both of these, but on the fence about which one I’d wear most. I’ve heard such great things about the Roll Neck Sweaters in general, but I’m a sucker for a good, cozy cashmere sweater that can also be worn under a blazer. Thoughts? 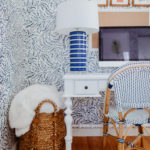