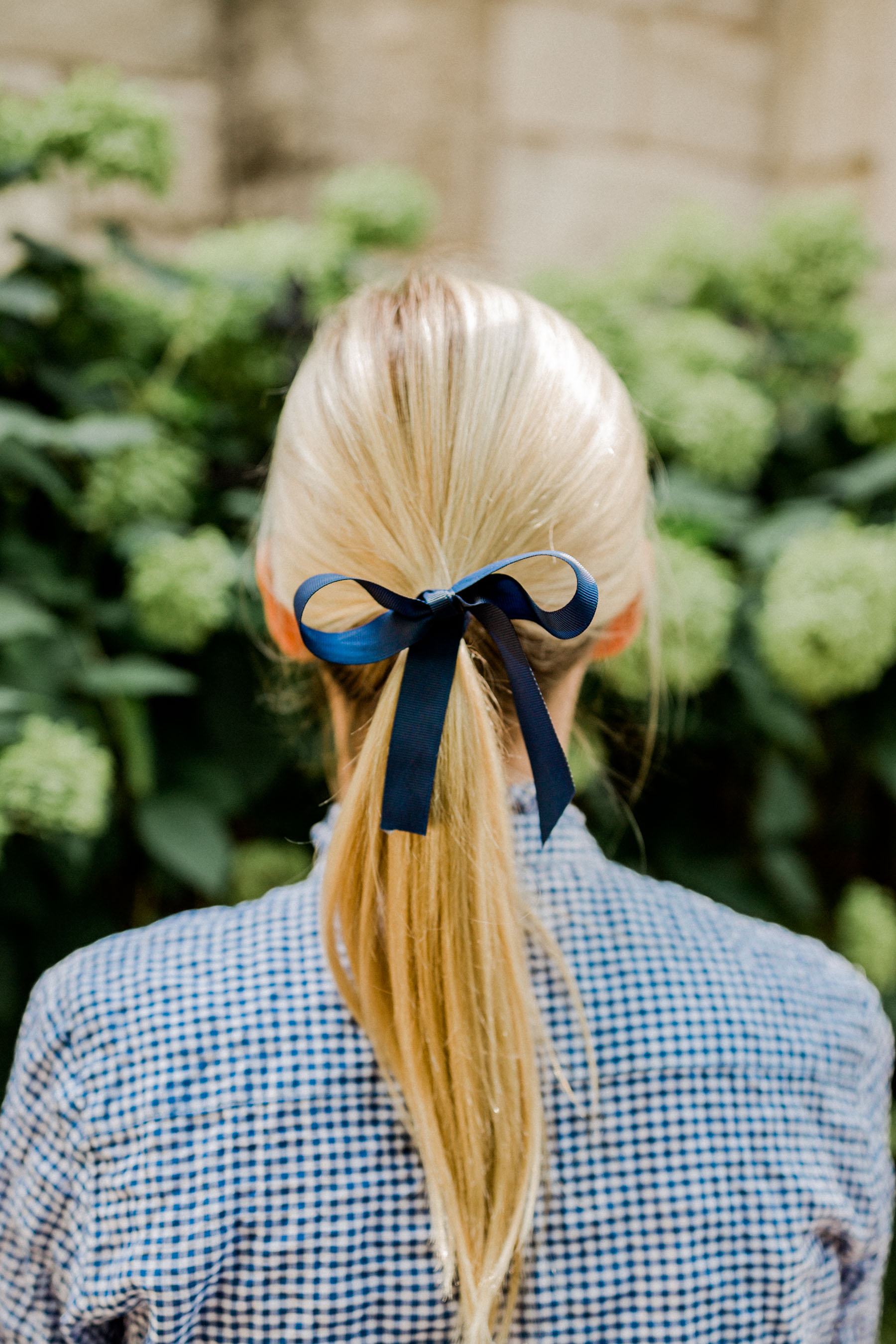 I want to preface this post with the fact that my physical appearance isn’t my top priority in life. Yes, I think there’s some power in dressing for success and feeling my best. (I mean, I do run a style blog, haha.) But life isn’t about looks. I am defined by what’s on the inside, not what’s on the outside. :)

That said, I’m human, and I have some insecurities, just like most girls do. (Even models have insecurities, I’m positive!) And my biggest physical insecurity is my hair.

You don’t say, Kelly! We’ve never heard you talk about this before!

Ha. ;) Can I tell you the story though? Yes? Perfect. You’re such a wonderful captive audience.

Anyway, it all started in 2009. I had long brownish hair. If you don’t believe me, this is what it looked like. I know! Such a big difference. (Also, shoutout to my favorite security officers who saved me countless times over the years. Sorry I called you guys so much.) But then I started dating Mitch, and I became a bit of a psychopath. Listen: I’m hoping you don’t judge me too much when I tell you this, but I was so head over heels for him that I went to H&M and spent what little money I had in my bank account on new dresses, and I bought a hair straightener to battle New York City’s humidity. And I highlighted my hair.

I don’t know what to say about this. I think all I can say is that I was 24 and completely googly eyed, and I became a bit unhinged. ;) The ironic part about all of this is that Mitch says he knows the time and place he fell in love with me: we were at a boozy brunch in the East Village, and I was sporting jeans and an old Yale t-shirt, borrowed/stolen from a friend. (I did not go to Yale.) And my hair was brown and curly/wavy.

Bah. ;) The things we do when we’re young and in love! But this is what started my obsession with highlighting and straightening my hair, and over the last eight years, I’ve been on a mission to destroy every last strand on my head.

For a brief few months during my pregnancy, my hair was thick and full of life. But then I had the baby, and 50 percent of it fell out–a common postpartum “symptom.” Today, I’m left with half a head of hair and a ton of three-inch-long hairs, as growth has just started. I know you probably can’t see this in photos. But take my word for it: it’s a very… interesting look. And not in a good way.

I’ve cried about my hair on many occasions over the last year. Typically, I’m really good about pushing it to the back of my mind. Obviously Emma was completely worth the hair loss, and I’m clearly blessed in far more important areas of my life than my freakin’ hair. But… you know. I’m flawed. Every once in a while, my hair situation gets the best of me, and those tears start flowing. What can I say?

A few months ago, though, I decided to get serious about my hair loss situation. First, I ruled out the possibility of a thyroid problem. (Turns out thinning hair–for me–is just a family thing, and something that’s exacerbated by hormones after childbirth.) Then I cried a little more and came up with a game plan. Here it is:

I wish I were a health nut. You know… someone who embraced vitamins and healthy foods, and used the gym for more than just its daycare services. But I’m not. That said, I’m finally following the advice of my peers, and I’m taking biotin. Not sure if it’s working, as it’s only been a couple of months, but my hopes are high. My cousin, Annie, actually developed an AMAZING vitamin concoction for healthy hair: flaxseed oil tablets, B12 and biotin… and dipping the ends of your hair in apple cider vinegar before showering to avoid splitting. Now that I’ve been on biotin for a few months, I’m introducing the flaxseed oil tablets and B12. My fingers are crossed. Thanks, Annie! <3

Use the right products

The whole not-washing-my-hair thing simply doesn’t work for me. Because I have such fine hair, I feel dirty when I don’t wash it every day, and I just can’t get past it. (I tried!) However, I’ve found the most amazing shampoo and conditioner which works wonders for thinning hair. Let me introduce you to 2–Minute Club featuring Pura D’or.

The shampoo and conditioner fortifies and energizes hair from root to tip, reducing hair loss due to breakage… and they both fight thinning hair naturally without chemicals. The best part? An eight-week study proved nine out of 10 users notice measurably improved volume after using the products. Good stats.

I’ve been using the products for several months now, and I’m astounded at how much less hair I find in my hairbrush every day. That hairbrush used to be a source of sadness for me, but after over two months of usage, I can very honestly say that I’ve seen a drop-off in hair loss. Every time I use it, I feel like I’m actually doing something to fix my problem. I love that!

Also, if you use the code “KELLY,” you can take $20 off your next order and get free shipping. It’s a subscription service, but you can cancel at any time without worrying about fees.

Throw away the straightener

I’m a weak person, so I didn’t actually throw it away. I simply packed it up and put it in our storage room… just in case. But for all intents and purposes, it’s gone from my life, and truthfully, I haven’t used it in over two months. Which is saying a lot, considering Chicago’s summertime humidity! I’m really proud of myself. I currently use this heated hairbrush, but only when I’m doing something special, and I’ve noticed a significant improvement as it doesn’t pull my hair out or damage it as much.

I’ve wanted to go natural for a long, long time, but I’ve been nervous about it because of rough experience with a salon back in New York. Long story short, they dyed my hair a beautiful shade of olive green, and I had to answer a zillion middle school students’ questions about it for three days before I could get it fixed. But after years of research and encouragement from Annie, I’ve decided that balayage is the answer. (This is what I’m thinking!) Yes, it’s expensive. But the idea is that it’ll be a less traumatic transition from bleach blonde to my natural locks, and I won’t have to do it very often… so it will likely end up saving me money. Also, Mitch maintains that he likes the brown even more than the blonde, so that’s encouraging. (Though Mitch is the kindest human being I’ve ever met, and he could totally be lying just to make me happy. Either way, I love him for it, and I’m thankful that he always knows the right thing to say.) We’ll see, though. I plan on doing balayage after Jess’ wedding… so I’ll report back then. Fingers crossed!

If you have fine/thin hair, what do you do to keep it healthy?! I’d love to hear! 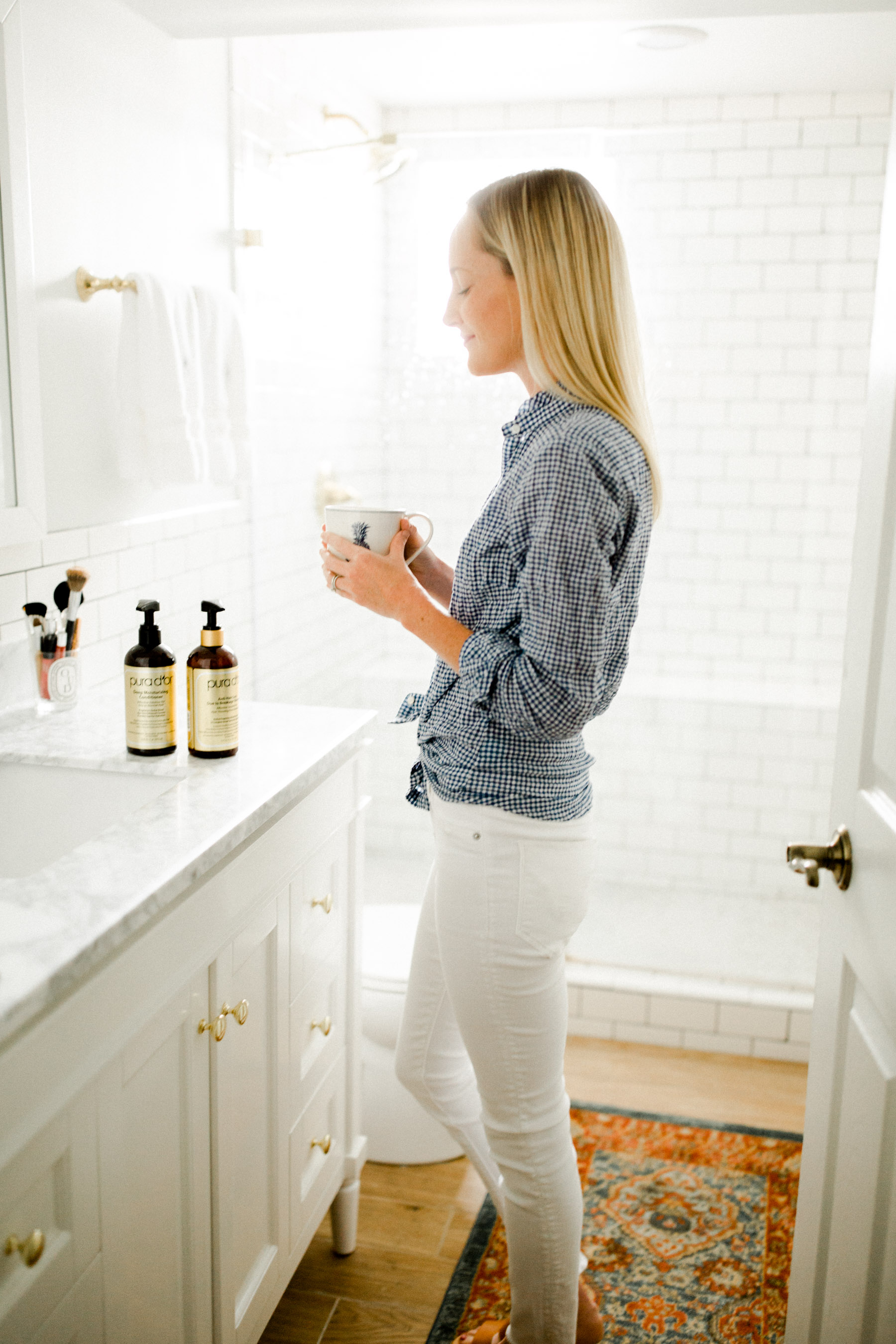 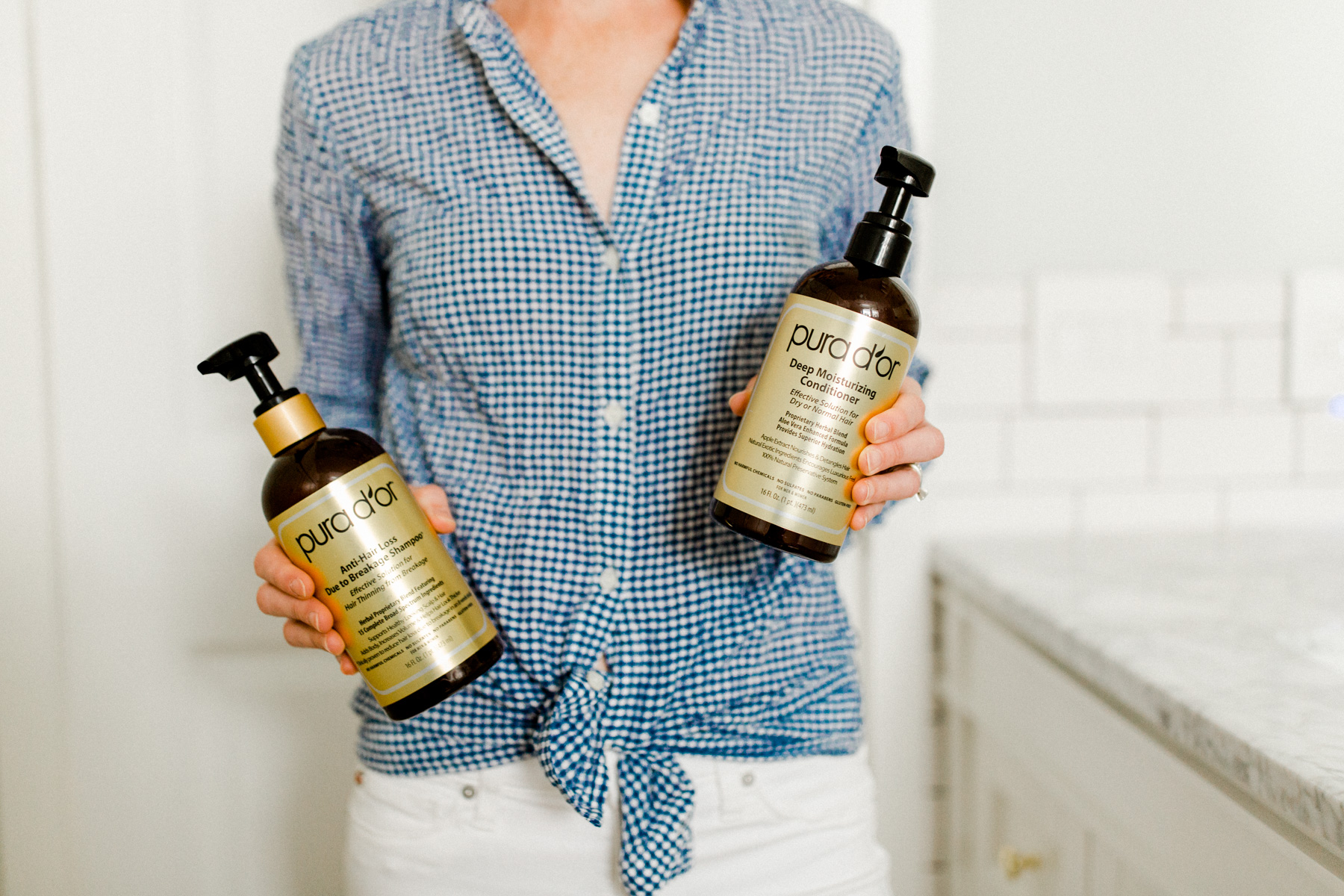 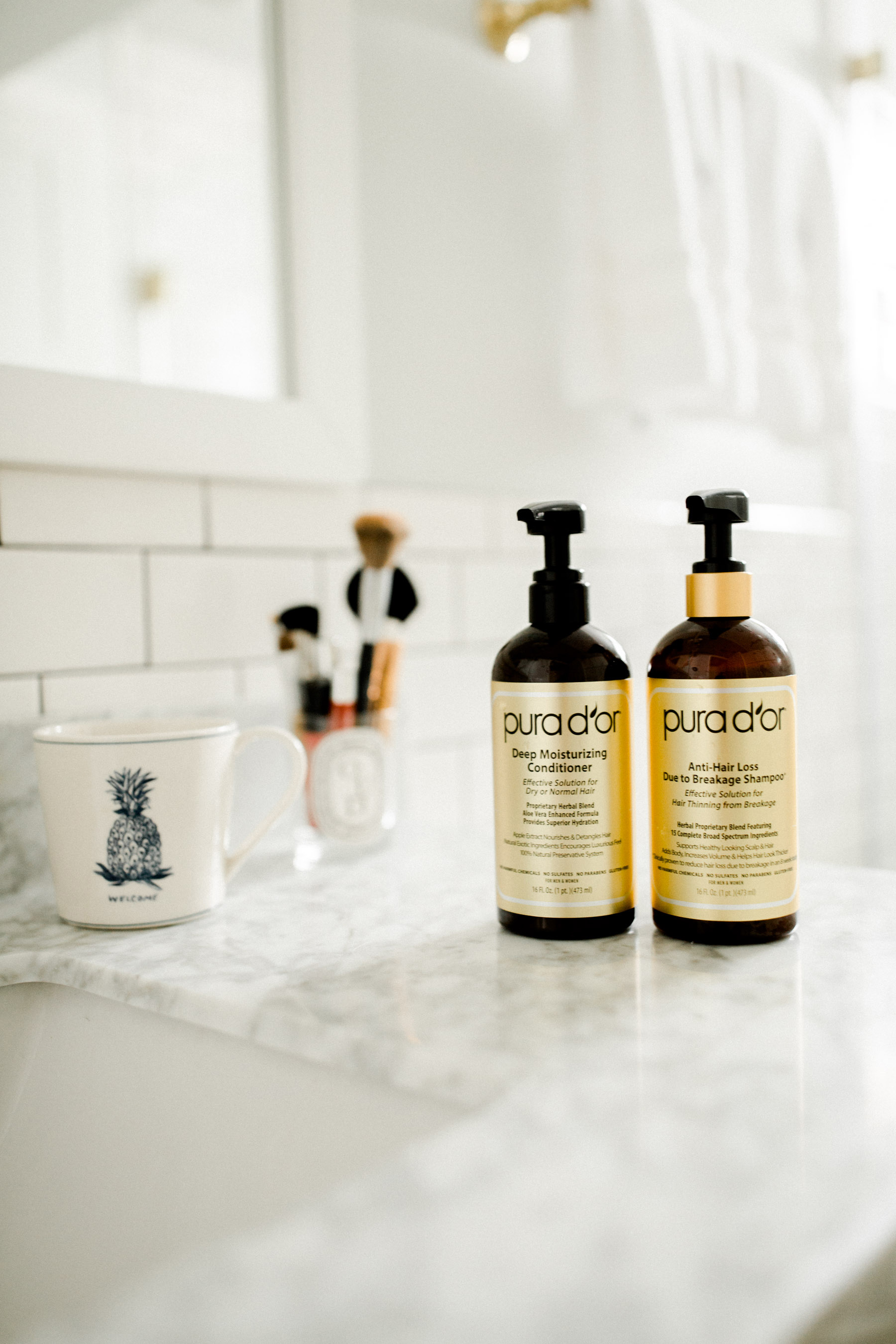 In collaboration with 2–Minute Club featuring Pura D’or. As always, thank you so much for supporting the partnerships that keep Kelly in the City up and running! 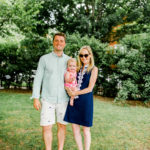