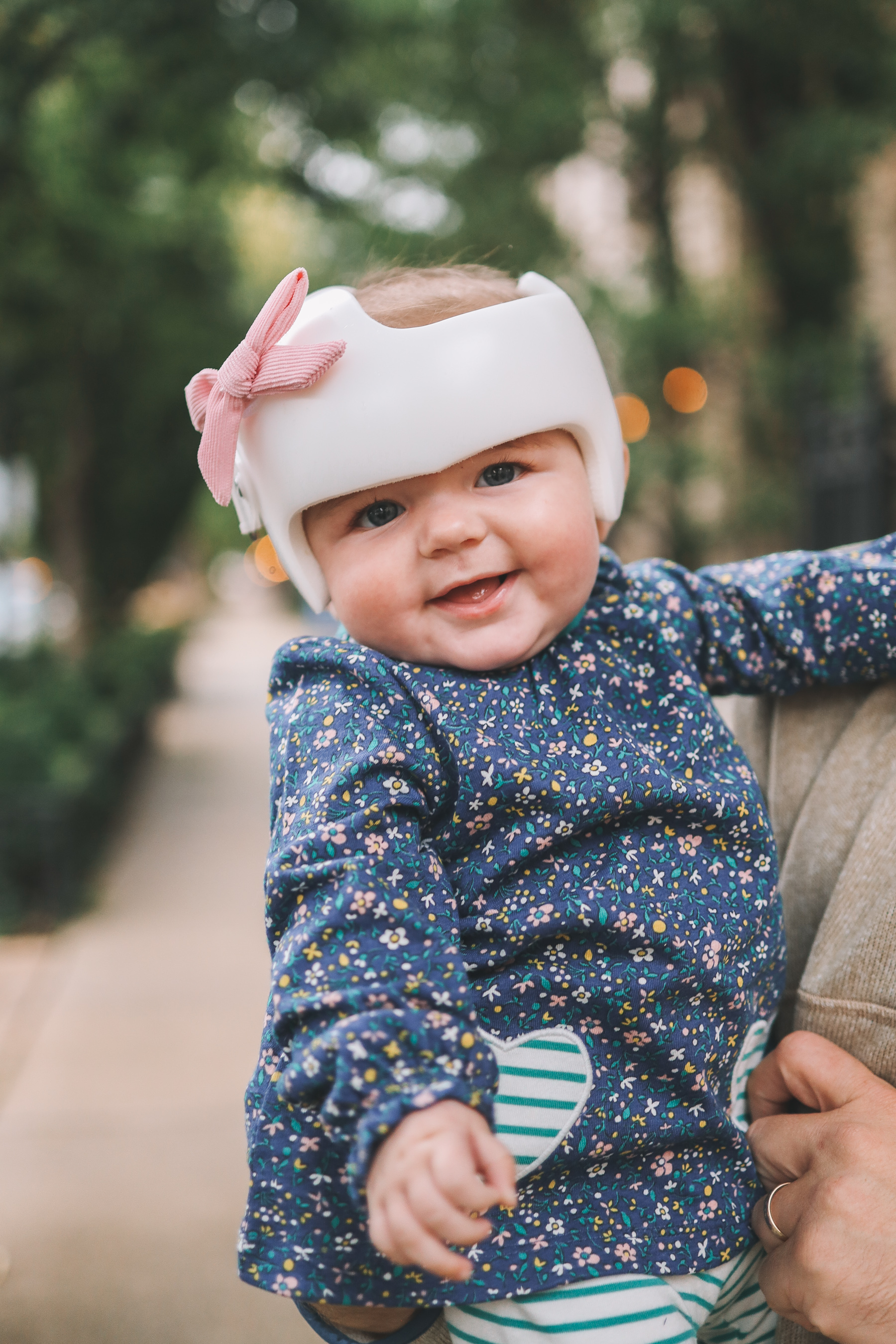 I’m here today to introduce you to the hottest new accessory for babies: the cranial helmet! 😉

Lucy has something called Plagiocephaly, and for the next six to eight weeks, she’ll be wearing this (rather adorable) band to correct the condition.

Yes, “Plagiocephaly” might sounds scary, but it’s actually very common these days; on average, one out of every two babies is affected to some degree. Most importantly, though, it doesn’t harm or impact brain development in any way, and it can be fixed (without surgery) if caught early.

I should note here that the helmet doesn’t cause Lucy any pain, either. She’s completely unfazed by it! More on that below, but I feel like that would be my primary concern if I was reading this, so I wanted to make sure that I covered it early in the post.

Plagiocephaly occurs when an infant’s skull–which is very soft to accommodate for growth–develops a flat spot on the back or side, most often from the infant favoring one position while sleeping.

Why is it so prevalent, you might ask? In the 1990s, the U.S. National Institute of Child Health and Human Development launched the “Back to Sleep” campaign, which encouraged parents to place babies on their backs at bedtime to reduce the risk of SIDS (Sudden Infant Death Syndrome). And it worked! Since then, SIDS has declined by 50 percent, which is absolutely amazing. Renamed “Safe to Sleep,” the campaign still exists today, and doctors’ continual recommendation is that babies sleep on their backs in their parents’ rooms until they are at least six months of age. “Safe to Sleep” is backed by the American Academy of Pediatrics, too! Because of the (wonderful) campaign, though, more and more babies are being diagnosed with Plagiocephaly. Still, most doctors and parents agree that this risk is more than worth it, as the alternative is obviously unthinkable.

Mitch and I noticed Lucy’s flat spot very early on, and almost immediately went in to talk to our pediatrician about it. Plagiocephaly was new to us; Emma hadn’t been affected, and we’d never heard of it before. I was–understandably, I think?!–really upset. As the doctor explained things, I logically understood that everything would be okay. I also knew that we were the lucky ones. So many other parents fight terrifying battles with their truly sick children. But over my three years of parenthood, I’ve learned that it’s just extremely difficult to receive news that something isn’t exactly right with your child. And in that moment, I was completely devastated. My job was to protect my baby, and I’d failed her.

But our pediatrician is truly fantastic, and she reassured and comforted us. She also said that many babies’ heads end up rounding out on their own, and because of this, her recommendation was to simply monitor the situation until Lucy reached month 4 and then reassess. If it corrected itself, great! If not, we could talk about Plagiocephaly bands, since the best time to treat Plagiocephaly is between four and six months when babies experience rapid head growth.

We liked this plan. There were actually a good number of things we could do in order to reduce pressure and prevent further “damage,” too! Throughout the night, we moved Lucy’s head around while she was sleeping. (Though she did always move it back to her preferred position. Sigh.) We purchased a softer (yet infant-safe) mattress. We did tons of tummy time and held her as often as humanly possible. We bought special Plagiocephaly pillows. (Note: Don’t put these pillows in the crib with the baby, as it’s a SIDS risk. Use only when you’re supervising them.) Whenever possible, we also ditched the stroller and swings in favor of baby carriers, seats an activity centers that kept Lucy upright. They allowed for less pressure and more head movement.

Still, Lucy’s flat spot only became more and more pronounced as the months passed, and Mitch and I became more and more upset and stressed about it. Putting her to bed every night was heart-wrenching, and I was constantly worried. It was the first thing I thought about when I woke up in the morning and the last thing I thought about when I went to sleep.

When Lucy turned four months, we met with the pediatrician again, and she referred us to Cranial Technologies, noting that it could go either way. Lucy didn’t have severe Plagiocephaly, but it was probably best to go in and talk to the experts.

After Lucy’s consultation, Cranial Technologies basically said the same thing: Lucy was in the “moderate” zone. Yes, she had it, and yes, the flatness was pretty significant. But it wasn’t an extreme case, and therefore how to proceed was really up to us.

In the end, after many late-night (tearful) chats, Mitch and I decided to get the band. Sure, there was an element of guilt that played a role; I was fairly certain the cause had been the hard mattress Lucy had been sleeping on and I couldn’t believe that I hadn’t put two and two together sooner so that everything could have been prevented. But I didn’t want #momguilt to be the reason we put our kid in a helmet. Instead, we tried to put ourselves in the shoes of an older Lucy. Would we have wanted our own parents to get the band if we’d had Plagiocephaly as infants? Both our answers were yes. We also didn’t want to have any regrets. While totally treatable when babies are under the age of one, the condition becomes harder and harder to correct as they grow into children… and eventually, it becomes irreversible. Ultimately, there were a lot of reasons why we should do it but not many reasons why we shouldn’t.

(Edit: I really appreciated what Jess said about it today. Cranial helmets are much like braces–though better, because they don’t cause pain like braces do! Most of us had them growing up, and most of us are grateful that our parents got them for us.)

I can’t speak more highly of our experience thus far with Cranial Technologies and the DOC Band, which is what they call their cranial helmet. They’ve handled our “case” with grace and empathy, and they’ve been mindful of how emotional the journey–from start to finish–can be. I’ve also been insanely impressed with the speed of the process. We received the custom band within roughly two weeks of our first consultation! Which I think is just plain awesome. After making the tough decision to proceed with treatment, no one wants to wait a long period of time to get started. Am I right?!

Lucy’s doing great. I kid you not, she took all of 20 minutes to get used to her band, and like I said before, she’s now completely unfazed by it. (The band only weighs six ounces, and it’s not tight, like I assume it would be. Pretty roomy!) And somehow, I think Lucy is even cuter with her helmet on. 😉 (I know. I’m her mom. But just look at that face!)

Lucy wears her band for 23 hours a day, and we take it off for an hour to clean it with rubbing alcohol, give her a bath, and check for red marks in case the band needs to be adjusted for her comfort. Bedtime was an issue at first, since doctors don’t recommend doing both the Doc Band and sleep suit at the same time. (Risk of overheating.) But then we bought the Anna and Eve Swaddle Strap (arms only) and she’s back to sleeping through the night. ;)

It’s actually not a big deal at all.

How does the cranial helmet work? It surprisingly doesn’t put pressure on babies’ heads, which is why it doesn’t cause Lucy any pain. I’m paraphrasing the doctor here and probably butchering this, but the custom helmet simply restricts growth in areas where growth is no longer needed, and redirects that growth to other parts of the head that need filling out. Again, no pain!

Over the course of the next ~two months, Lucy will visit Cranial Technologies once a week so they can monitor her progress and make any necessary adjustments to the DOC band. We’ve already made a couple of adjustments, and the helmet really does fit her perfectly now.

In case you’re wondering, some insurance companies cover cranial helmets and others don’t. I’ll let you guess which camp we’re in. ;) But all in, without insurance coverage, the band cost $1,800. I’d heard rumors that bands cost between $4,000 an $5,000 out of pocket, so this was a pleasant surprise!

Anyway, I guess I should close with how amazed I’ve been by the kindness of friends, family and strangers over the last month. I kind of expected that Lucy would be treated differently because of the helmet and that perhaps we’d be criticized for our decision. (Absolutely worth it, but… you know. It’s a particularly painful punch to the gut when it’s regarding your child.) Conversely, though, literally every person we’ve interacted with has been wonderfully supportive and empathetic, and Lucy is constantly making friends. I can’t tell you how often we’re stopped now just so someone can tell her she’s beautiful, share a success story, or comment on our little girl’s infectious smile or pink corduroy bow. And I think she’s lovin’ it. ;)

Just this evening, when we arrived at our hotel in New York, a nice older man stopped us to tell us that A) Lucy was adorable and B) his son had a cranial helmet 13 years ago, and we were making the right decision. It worked, he said, and his son was completely unfazed by it as well. Mitch and I were so touched that this gentleman took time out of his day to pass this wisdom along, as he had once been in our shoes.

“Enjoy your girls,” he said with a smile as he walked away. “It all goes by so quickly.”

Little Lucy, you have never been more lovely. 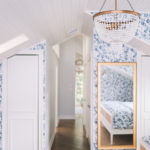