How We Tackled Potty-Training 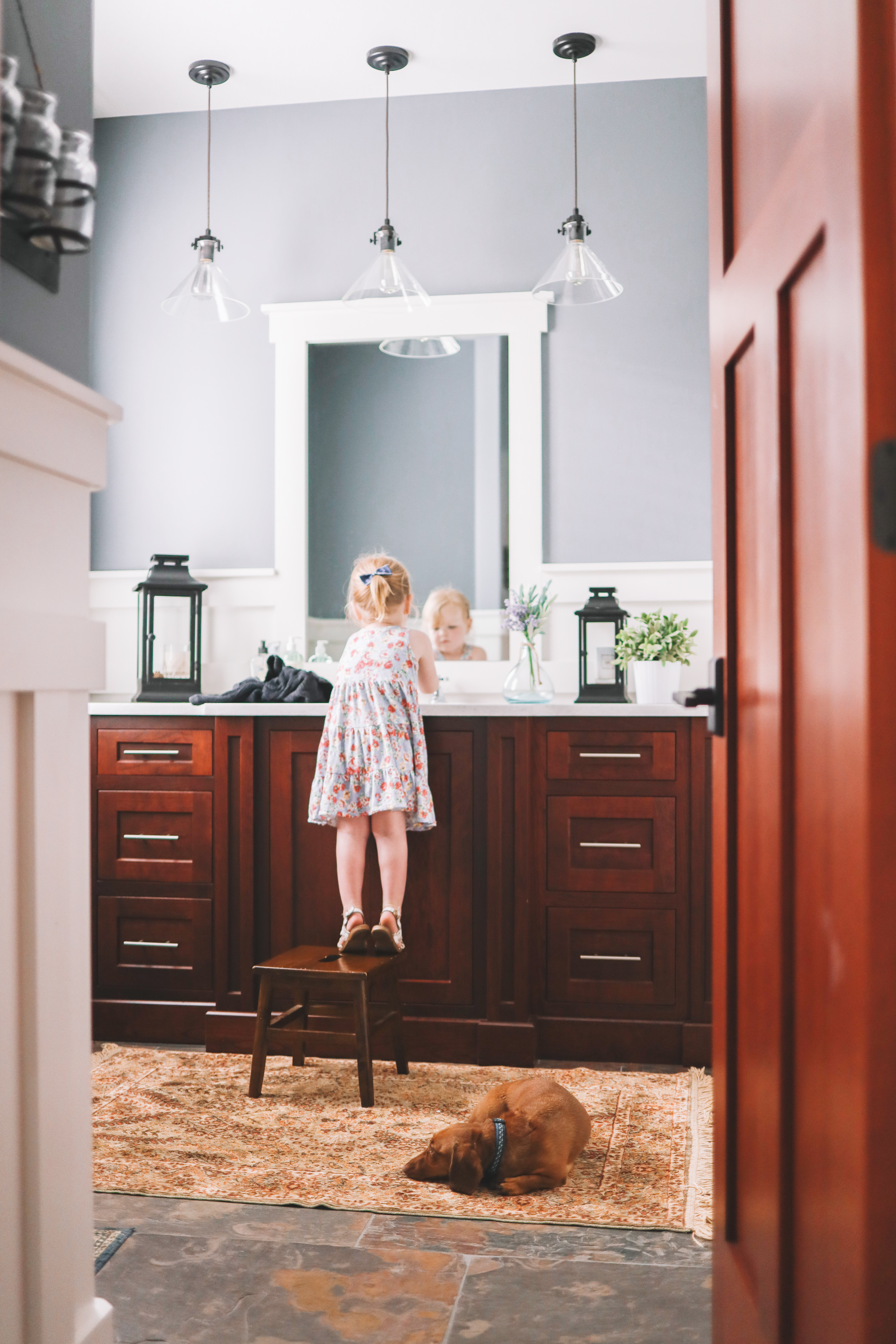 As some of you might remember, we finally committed to actually potty-training Emma earlier this summer. We made a couple of previous attempts in the winter and spring that started off well but then failed, mostly because we kept starting and stopping. Whether we were traveling, having a baby, moving or just busy, the timing was just “never right,” and so it never took. Totally our fault!

And then Emma was accepted to a full-day pre-school program, and we were like, “Bah! Gotta get this DONE.” To do so, we relied on advice from our friends and family members because I got a bit too overwhelmed with all the available literature on the subject. ;) And I’m happy to report that she was (pretty much) trained within one week. (Which was shocking, considering how many failed attempts we had under our belts at that point. 😂) Sure, she had an accident every once in a while after that, but they were seldom… and now I can’t remember the last time it happened!

We are far from experts on the topic but wanted to share what worked for us in case some of you are nervous about starting or struggling through it as we speak. Because life on the other side of diapers is AWESOME, and if the Larkins can do it, you.can.too. 😉

We talked it up. I think we did this for at least two weeks before we started, and we asked our family and friends to talk it up, too. (Thank you, guys!) For example, our friend Barbie–whenever she’d run into us–would be like, “EMMA! I’m so excited that you’re going to start potty training next week! You’re SUCH a big girl!” Or when we FaceTimed with our parents, Grandma would tell Emma that she was already so proud of her and she just knew she’d do a great job. Honestly, we tried to weave it into every conversation, haha.

We had playdates with her friends who were already potty-trained. This was huge. Emma is obsessed with her friends; they’re pretty much all she talks about, and nothing makes her happier than playdates. We’re also the luckiest family ever and our wonderful next door neighbors have two little girls, too. Lucy (I know!) is Emma’s age and Abby is a couple of years older, and both are potty-trained. The moment that they told her that they were potty-trained, she was in. If Abby and Lucy were big girls, she needed to be a big girl!

We read books. “Big Girl Abby” and “Big Girl Lucy” handed down three potty-training books to Emma, and we read them every night. Mitch and I loved them because they were downright hilarious, but they were also extremely helpful. ;) First, they provided Emma with some excellent pointers, and second, she kind of went to bed dreaming about potty-training. Sure, you might argue that there was an element of brainwashing here. To which I have no retort. 😜

We walked past her school every day and talked about how she had to be potty-trained in order to go to pre-school. This made big impact. Emma was/is SO excited about starting school in September, and when we told her that only big kids are allowed, she became even more motivated. So much so that whenever we’d walk past the building, she’d shout, “HI [name of school]! I’m going to be potty-trained soon so I can go to you!” It was pretty darn cute.

We bought fun underwear. That month, Emma was on a mermaid kick, so I found mermaid underwear and she was all about it. Her diapers were fine, but goodness. That mermaid underwear was STUNNING. I caught her on a couple of occasions taking it out of her drawers to admire it. 😂

We practiced sitting on the potty. We did get Emma a little potty, but she wasn’t a fan. She really wanted to sit on the “Big Girl Potty,” so we went with that and simply got her a little stool and taught her how not to fall in. We later realized this was kind of shrewd because we didn’t have to carry around a portable toddler potty or struggle with it when out and about in the city!

We took the diapers off

We just did it. We had a countdown to “The Day the Diapers Come Off,” and when it arrived, I’ll admit that I was pretty nervous that our new house was about to be destroyed. But I rolled up our rugs and simply pushed that out of my mind. ;) And then we took the diaper off and simply put the underwear on. (I know some people do the whole “bare-bottomed method,” but we decided against it since she was SO excited about her mermaid underwear.)

We constantly told her we were proud of her. Roughly 15 minutes later, Emma had an accident. And she was not happy about being wet. Or the fact that her beloved mermaid underwear was “ruined.” But we dried her tears, changed her, and reassured her that she was doing a GREAT job and we were proud of her. Accidents happen! After that, we chatted about that funny feeling she probably got right before she pee-peed. “When you get that feeling,” we told her, “Say, ‘Mommy, Daddy, I have to go potty!'” And 15 minutes after her, she yelled, “Mommy, Daddy, I have to go potty!” So we raced to the bathroom and went through the motions, and, of course, she didn’t have to go. But we made a big deal out of the fact that she made the decision to try, and she was proud.

We set up a reward system with her “help.” In that happy moment, we explained that we thought she should get a “treat” every time she made it to the potty on time. (And that she would never be punished for accidents. Because they happen!) We did collectively decide on the single M&M, but also decided on a non-food-based reward if she made it three times that day: A trip to the park! She loved this idea and the fact that she helped design the reward system.

We visited the potty every 30 minutes. SHEESH. But because of this, she was successful a few times, and that was encouraging for her. We also got used to wiping, flushing and washing our hands. Repetition!

We celebrated her success. Emma had six accidents that day, one of which happened at the park at the end of the day. (We actually were kind of hoping that she’d have an accident there, just so she’d learn what a big pain it is. She had to STOP PLAYING! The horror!) But she also “made it” a bunch of times, and we told her that she was well on her way to being a big girl. Lots of hugs. Lots of high-fives. Lots of singing and dancing. And then did a full load of laundry.

We kept her company during #2. I won’t go into too much detail here, but going #2 is tough for toddlers! It’s an uncomfortable feeling, and they often times have to wait around on the potty for it to happen, which is booooooring. To make it a little easier, we stocked the bathroom with (disposable!) Highlights magazines and stayed with her. Don’t get me wrong: It stinks. Literally, haha. But staying in the bathroom with her and chatting seemed to help.

We handed over responsibility to her

The following morning, she took her (wet) training pants off and went to the potty (even though she didn’t need to go), and then we taught her how to put her underwear on by herself, like all big girls do. (Mermaid side should be on the bottom, on the floor… and then insert legs, stand up and pull up!) And then we did a little dance that she did it on her own!

Over the course of about a week, we slowly stopped marching her to the bathroom every half hour, and instead would simply ask her if she needed to potty. Yes, she still had accidents, but they became fewer and fewer. About a month later, we realized that she’d gone a full week with no accidents! We celebrated by having “The Best day Ever,” which included all of Emma’s favorite activities. And then we collapsed into bed because PHEW. We’re apparently old and can’t keep up with a toddler.

As I said earlier, life on the other side of diapers is grand. And remember: if the Larkin Family can do it, YOU CAN, TOO! 😜

Have you successfully potty-trained a kid?! If so, any pointers or tips for others? Please and thank you! 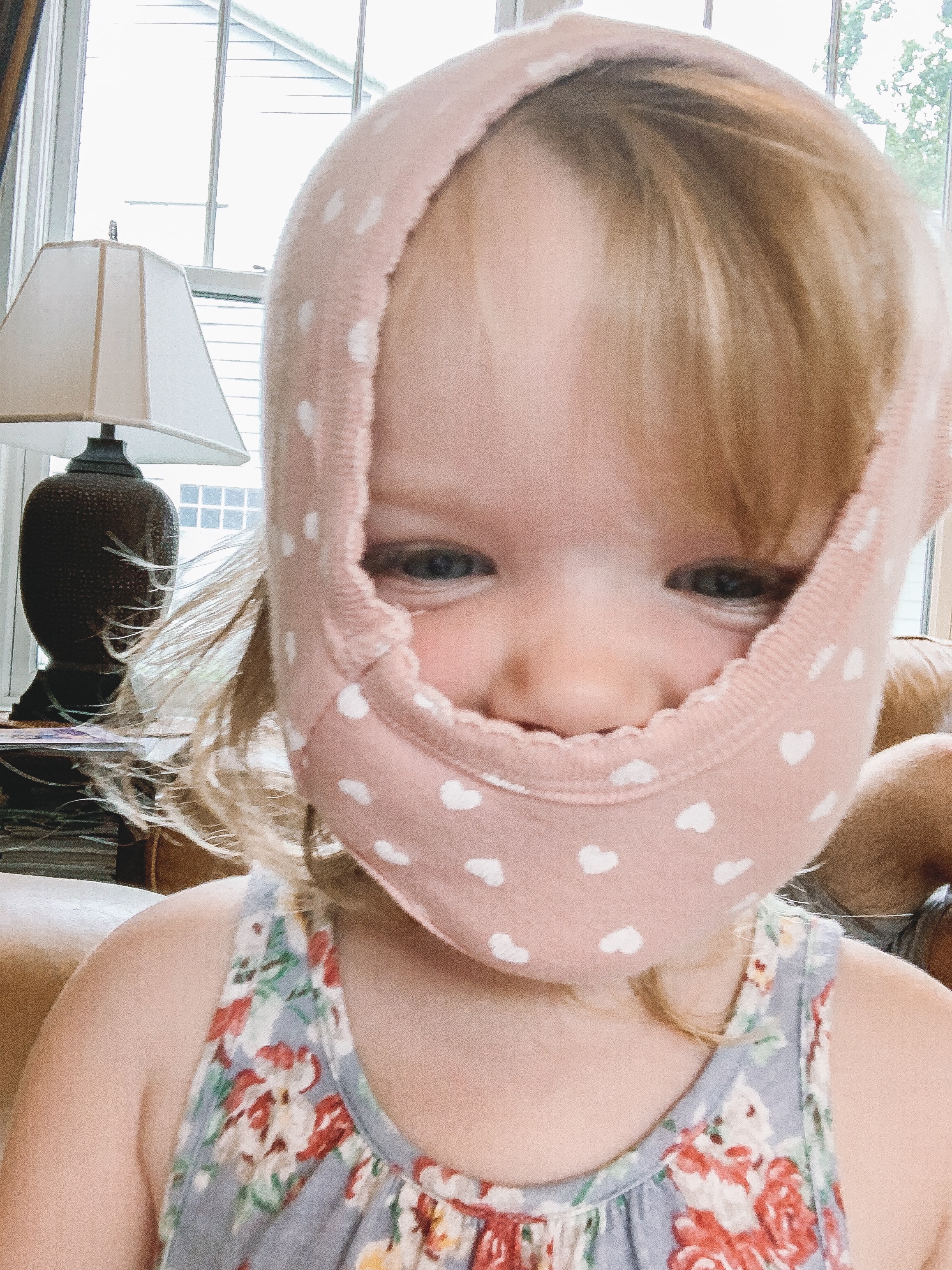 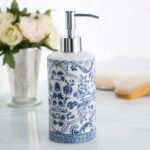